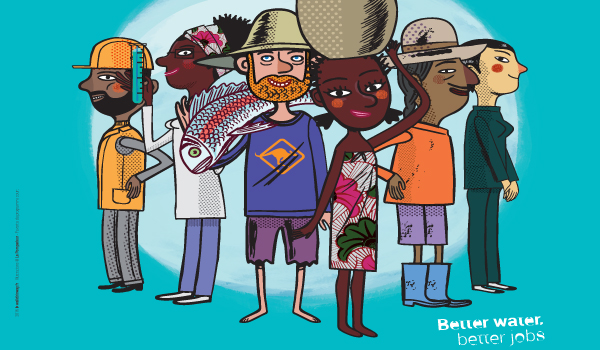 The theme for this year’s World Water day is “Better water, better jobs”. You can watch the trailer below:

World Water Day is an opportunity to learn more about water related issues, be inspired to tell others and take action to make a difference. So in light of all of this we’re bringing you 10 things about water you may not know.

140 litres! This is how much water it takes to grow the coffee beans, process them, package them and ship them.

1.5 Billion! This number represents nearly half of the world’s workers and, nearly all jobs depend on water and those that ensure its safe delivery.

17%! Every hour, 38 workers die from water-related diseases. This is due to poor quality drinking water, poor sanitation, poor hygiene and a lack of knowledge.

In some factories women use rags from the factory floor as menstrual cloths because there is no access to improved sanitation facilities. These cloths are charged with chemicals and often freshly dyed which can lead to infections and even death.

Water is not confined to political borders. 46% of the globe’s (terrestrial) surface is covered by transboundary river basins.

Currently there is a high demand for training in the domain of international water law. The project e-Learning Capacity Development Project in International Water Law aims to address these training needs of countries sharing transboundary freshwater and groundwater resources.

40% of all the world’s oceans are polluted by humans.

Based on your country of residence and your daily lifestyle, you will have a unique water footprint. You can do a basic calculation of yours here or go for in-depth over here. When I chose basic, mine was calculated at 1793 m³ per year, when I estimated in depth figures this decreased to 1285 m³ per year

70 percent! And Climate change will only make matters worse. Modern irrigation is one of the success stories of the 20th century. As the world’s population doubled, irrigated farming expanded from 40 million hectares to almost 300 million hectares today – a seven-fold increase.

So how much do you know about World Water day? Take this quiz that the UN Water organisation produced for school kids to see if you make the grade.

To learn more about Water, visit the UN Water organisation’s learn page – we guarantee you’ll find out at least one thing you did not, but should know.

Switch Off for Earth Hour