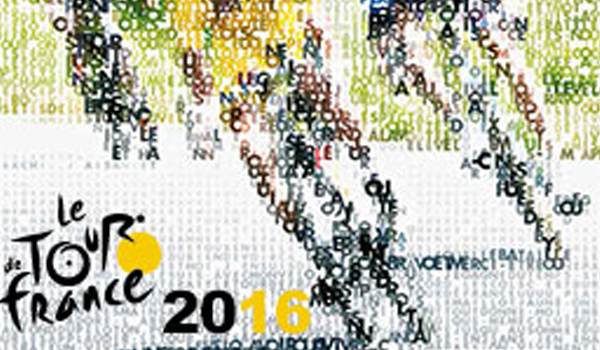 The largest sporting event in the world, the Tour de France is currently underway. It began on Saturday, July 2nd and ends on Sunday July 24th. Established in 1903 by journalist Géo Lefèvre to increase sales of L’Auto magazine it began with 60 cyclists, of who, only 21 completed the six stage race.

Over a century later, le tour has grown to include 20-22 teams of nine riders and now consists of 21 stages taking place over 23 days during June/July each year. The route covers 3,519km and primarily goes through France with the exception of some stages taking place in nearby countries, Spain, the Principality of Andorra and Switzerland this year.

The 3,500 +km route changes each year, but, the format stays the same. It features at least two time-trials, the passage  through the mountain chains of the Pyrenees and the Alps and the finish in the Champs-Élysées in Paris.

Your Twitter timeline or official Tour de France website will keep you up to date on winners and stages but when you run out of conversation, these fascinating Tour de France Facts will come in handy.

The fastest average speed of the Tour de France was 41.5km/hour during the 2005 tour. The slowest average pace was recorded in the 1919 tour at 24.1km/hour. Bear in mind that during the early years a gearing system was banned; meaning cyclists had to ride up hill on a single speed. They were given the option of getting off their bikes and manually changing gears.

Each of the nine team members must wear identical kits, this means matching socks, gloves, helmets, shorts and jerseys. The only exception is the leader jerseys.

Yellow Jersey: The leader, the rider with the lowest cumulative time wears a yellow jersey. The yellow jersey is a nod to the yellow pages of the L’auto-Velo, the newspaper that started the Tour.

Green Jersey:  The cyclist with the most riders points wears a green jersey.

White jersey: The rider younger than 26 years who has the lowest cumulative time wears a white jersey.

White number on Red: The most combative rider of the day gets to wear a white number printed on red paper the following day.

Riders have a gentleman’s agreement which allows riders to take a “pauses pipi”, a quick potty break without trying to make up time on each other.

The average tour rider will burn 123, 900 calories over the tour. That roughly equates to 252 double cheeseburgers from McDonalds!

Whilst cheating in the tour is nothing new – the first incident was recorded in 1904 – the most creative cheat did not utilise banned substances or blood transfusions. He chose lead. In 1953, French rider Jean Robic swopped one of his water bottles for a bottle filled with lead. The bottle helped him soar down a mountain at record speed.

The tour de France attracts 12 million spectators along the route. They travel on average 130km to see stages of the Tour de france and will spend on average 6 hours at the roadside. 30% of spectators are women.

3: chains worn out by a single rider.

4: riders have died during the Tour.

4,700: hours of TV coverage the Tour gets annually.

8,400: food bags handed out at feeding stations during the tour.

€1000: Amount every finisher of the tour gets as a reward for slogging it out for the entire 3 weeks.

3.5 billion: The amount of people around the world who watch the Tour de France on TV.

188: Countries around the world that broadcast the Tour de France.

This year, Mark Cavendish’s 29th stage win put him into second place in the all-times list.

Biggest winning margin is 28 minutes and 27 seconds by Fausto Coppi–Stan Ockers in 1952.