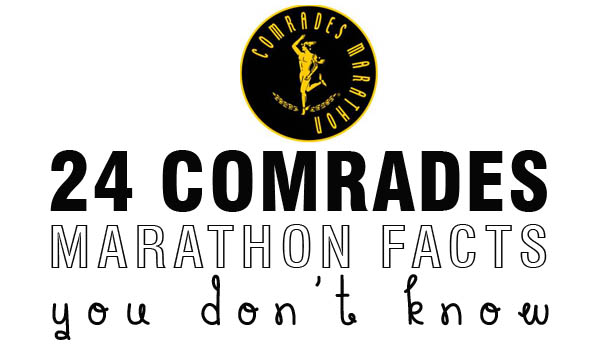 This Sunday, June 1 2014 close to 18000 runners will descend on the small town of Pietermaritzburg and begin an 89km trek to Durban. Their long and hardjourney will be in pursuit of a tiny but precious medal dangling from an iconic black and yellow ribbon.

Most of you know that:

And perhaps even that

An iconic race filled with so much history, most known but some unknown, so we found 24 of the more unknown facts of the ultimate human race.

2. Initially the time limit for the Comrades Marathon was 12 hours; it was then reduced to 11 hours in 1928. On the 75th anniversary of the race in 2000 an hour was added, returning the cut off to 12 hours with a special Vic Clapham medal given to those who finished in the last hour.

3. The Comrades Marathon was initially run on the 31 May (what was Republic day). In 1995 it was changed to June 16 to coincide with the Soweto uprisings.

4. The first woman to run Comrades was Frances Hayward in 1923. She ran unofficially as her entry was refused. She finished in 11:35 and did not receive a medal. She got a silver tea service and a rose bowl from fellow runners and spectators instead

5. The average age of a female Comrades runner is 40

6. The average age of a male Comrades runner is 42

7. The youngest person to win the Comrades Marathon was Phil Masterson Smith in 1931. He

was 19. As the age limit is now 20 years, that record will never be broken.

8. Vladamir Kotov is the oldest runner to win the Comrades marathon at age 46 in 2004.

9. In 1932 Geraldine Watson was the first women to complete both the up and down run. She did so as an unofficial entrant as women were still unable to enter

10. The first international runners to run Comrades were from England and did so in 1962.

11. 1975 was the year that the Comrades marathon opened up entries to allow both women and runners of colour to enter the marathon. That year Vincent Rakabele was the first black man to ever finish Comrades and Elizabeth Cavanaugh was the first woman to officially win Comrades.

14. The average man’s temperature will reach 40 degrees Celsius after 3 hours. Avoid heatstroke on hotter days (like 2013’s record high temperatures) by pouring water over your head.

15. It will take you approximately 11 250 strides to complete the comrades

17. Runners who have run 25 Comrades finishes to their name, run for free.

19. You will sweat out approximately 4.5 litres of liquid. Stay hydrated by drinking water, energy drinks at regularly intervals.

20. After you hit the 30km mark your body will have used up all your carbohydrate and will start eating away at your protein stores. Avoid hitting the wall by using by taking in nutrition every 45-60 minutes

21. Runners lose between 2kg to 5kg during Comrades. But ladies, don’t freak out when your weight fluctuates 1-2kg daily in the week after!

24. Bruce Fordyce holds the men’s record for most wins at nine. While Russia’s Elena Nurgalieva holds the women’s with eight wins.