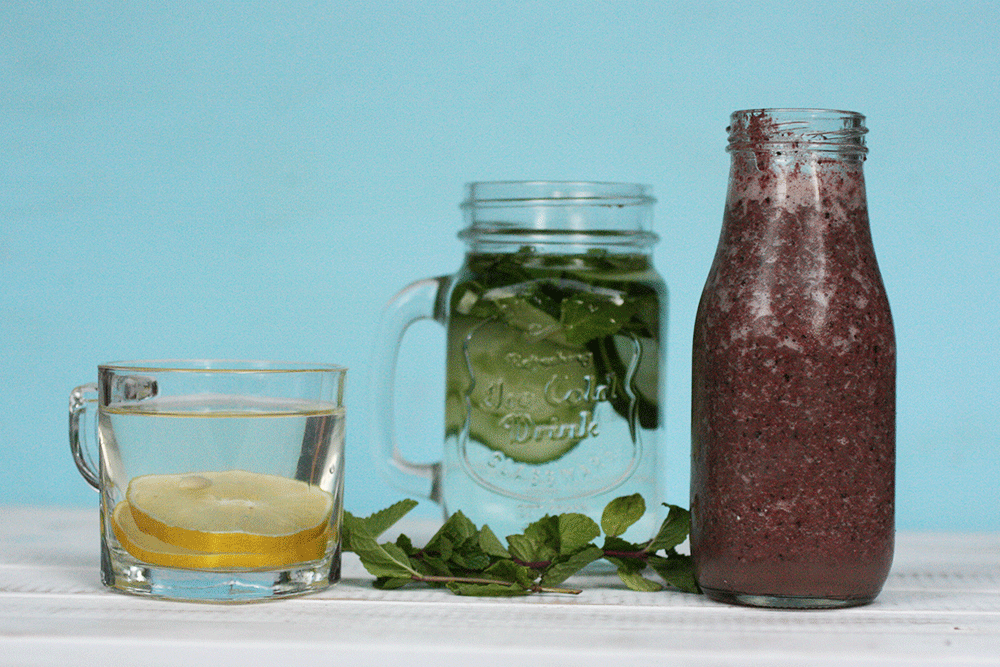 I’ve been thinking about my gut lately and happened on a 3-day gut reset designed by Dr Vincent M. Pedre. I’ve heard him on podcasts, he’s written a book called Happy Gut and is, I hear the Gut Doctor. I skimmed the reset (my first mistake), decided it looked doable and timed it to begin right after a Jewish holiday involving many a slice of cheesecake. I figured, if ever my gut was in need of a reset, it would be after bombarding it with cheesy goodness. It will be good for us I told Feige as I convinced her to join me (why suffer alone?).

A few days before we started I glanced at the reset, focusing really on the recipes given so I could get the necessary ingredients (mistake two). I got everything minus the slippery elm, as he appeared to use a powder version, which he turned into a porridge and all I could find were capsules. I also looked into slippery elm and read what’s it’s for (indigestion, heartburn, ulcers, diarrhoea) and promptly decided not to start with a supplement which cures things I do not suffer from. I possibly should’ve applied this wisdom to the gut reset, but I was committed and had the ingredients and how bad could it be? 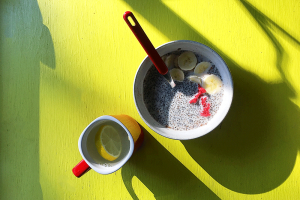 Hungry after an NTC workout and a run, I headed to the kitchen to consume a breakfast made to heal my gut. I had pre-made Dr Pedre’s chia pudding instead of the suggested slippery elm porridge, as the only approved breakfasts of his I could find were chia puddings and smoothies consisting of a minimum of half a cup of seeds or nuts for breakfast. Chia pudding seemed easier. Following his recipe was another mistake. I learnt later that he prefers food more liquid. I like something with pudding in its name to be thick like pudding. I topped it with bananas, leftover rhubarb raspberry jam. And washed it down with a warm cup of lemon water. No I would not be having coffee, apparently my gut needed a break.

I left breakfast feeling full but unsatisfied, like I hadn’t had real food (oh the irony). 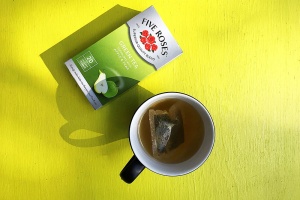 Mid-morning, I had a cup of green tea, which I was quite looking forward to. I chose a pear and apple flavoured one which made it easier to skip the sweetener.

By 1pm I was starving. As someone who often skips lunch, feeling hungry when my day had consisted of sitting in front of a computer screen willing myself to work, as opposed to running around, was unusual.

I was however, most excited about lunch – bone broth and vegetables, which left me feeling full and satisfied, finally. 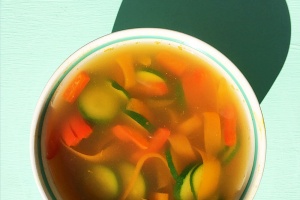 In the afternoon he suggested cucumber water. Prepped the night before so the flavours could infuse properly. I was instructed to sip pretending I’m at a spa.

After downing the cucumber water, as well as the cucumber, I started on supper which was the best meal in the whole reset. I took his suggested of salmon with a dill sauce and greens and turned it into a huge salmon salad that was bright and flavourful. 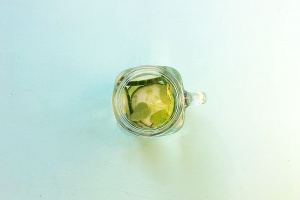 By the end of the day I was already feeling the effects of the gut reset. And they weren’t good. I felt tired, sluggish and bloated. I was in fact giving myself gut issues. I turned down the herbal tea opting for an early night to make the day end sooner. 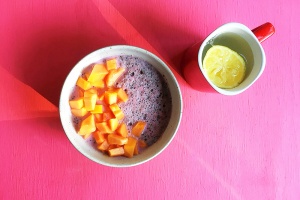 After a speed run in which my legs felt like led and I failed to keep pace, I headed for breakfast number 2. Chia pudding, with the addition of protein powder in the hopes of it filling me up. Another lemon water later, I left breakfast feeling not my best self.

I struggled through the morning feeling tired and fuzzy which I knew was not a lack of sleep. By 10 I was famished and had my green tea to tide me over till lunch, which I promptly started thinking about. 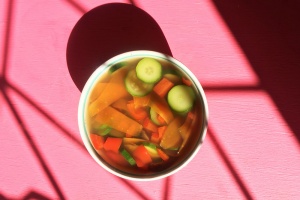 Lunch was another broth and prepping for my mini fast that night I added more veggies to make it more filing. It was of course delicious, but I hated the way I was beginning to think only of food and my next meal, hoping maybe it would make me feel better.

I was in fact going crazy and Feige and I started tempting ending it. We decided to have the suggested smoothie for supper and see how we felt.

By 5pm we were hungry enough for dinner. Hunger, I learnt is all part of the reset, I don’t think I’ve heard my stomach grumble quite as often as I did during this 48-hour period. 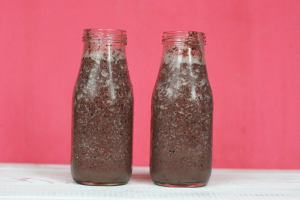 I made the smoothie as per his instructions which consisted of loads of water, spinach, blueberries and macadamia nuts and came out with 4 glasses of the worst smoothie I have ever tasted. Turns out a smoothie is not just throwing things into a blender and hoping for the best, there must be a balance of creaminess and sweetness and well, actual flavour.

I believe it was the smoothie that broke us. It left a bad (literal) taste in my mouth and I was hungry and going to bed hungry is worse than going to bed angry because you know you’ll be waking up hangry which is no way to start a day. 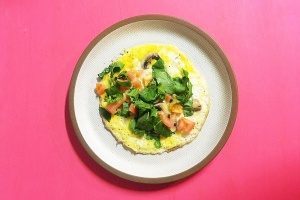 It wasn’t sugar or chocolate I was craving, it was an egg. Yes, an egg, and that’s when I realised how ridiculous continuing on with a gut reset would be. It was not making me feel better and I was feeling guilty about wanting an egg for supper. After much contemplation about quitting we decided to have an omelette for supper and it was the best omelette I had ever eaten.

We’d already decided night 2 to call it quits. We both had had two of the worst feeling days where we felt consistently tired, sluggish, bloated and struggled to focus. We began fixating on food and as someone who spends a fair amount of time thinking about food and creating recipes for brands, I noticed quickly that the way I was thinking about food wasn’t in the fun way but was becoming an unhealthy and restrictive obsession. We were in effect resetting our guts from happy to unhappy and so we followed our guts that morning and had a breakfast consisting of coffee, scrambled egg and fruit.

The next time I thought about food was around 2pm when I had some quinoa, broth and roasted veg. I accomplished more that day than the previous two combined and felt sharp and awake.

Thinking back on the reset I realised three things.

One: I do not like following diets. I enjoy choosing what to eat and eating what I feel like at that time. Part of the fun of mealtimes is the decision and making of the food. And as I learnt when following a diet designed to reset your gut to healthy, I was pretty good at following my gut and figuring out what to eat and what to avoid.

Two: We live in a world where there’s something wrong with everyone, we’re told that most of us are gluten intolerant, have leaky guts, or a host of other imbalances. Depending on who you’re listening to, grains are bad, so is sugar, nuts can be terrible, fruit isn’t to be consumed often and don’t get me started on peanuts which are not in fact nuts. It’s very easy to fall into the thinking that there must be something to be fixed. While my diet may not be perfect and there is room for improvement, an upset gut is not what I had. Don’t look for problems that don’t exist or fix something that isn’t broke. A gut reset to me now means that when I feel like my body needs a little reset, I’ll eat more greens, drink more water and keep meals simple. If you want to do a gut reset, take note of how foods feel after you eat them. Avoid the ones that don’t leave you feeling good. Eat more of those that give you energy and make you feel good.

Three: Is it quitting if you’re just following your gut?

Why Probiotics Belong in Your Skincare [+ WIN Esse Skincare worth R2680]

Behind The Brand, My Story, People

Behind the Brand with Meghan Werner of Theonista

What is the Microbiome and Why Does it Matter?