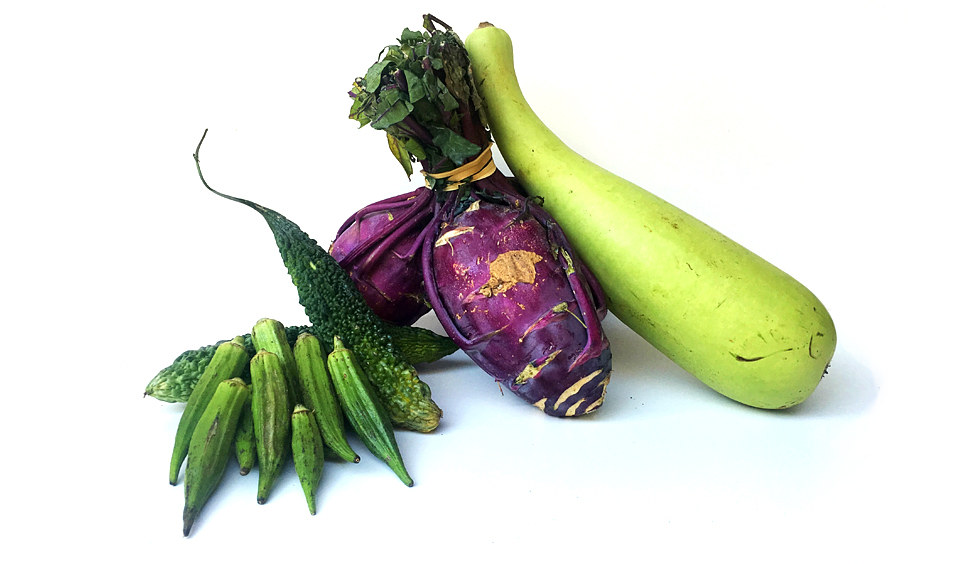 A wonderful thing is happening at our local supermarkets and grocery stores… Things that you could only ogle at on your Instagram feed are now readily available. Nut butters of every kind? Check. Plant based milks to fill an entire shelf? Check. Rainbow carrots, radishes and swiss chard, really everything rainbowed? Check, check and check. 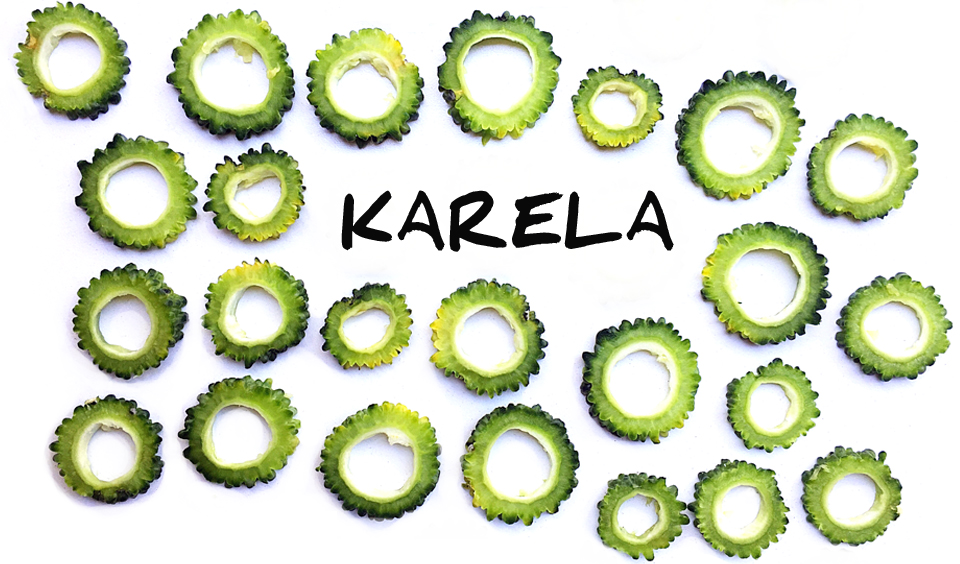 Somewhere in between rows of baby marrows and baby squash I spotted Karela. Visually Karela looks like mini cucumbers with warts all over. Perfect, I had my first subject.

The store owner warned me that I may just want to google them before buying because it’s bitter and not a popular item. I threw caution to the wind and bought a pack anyway. YOLO.

Karela, which is a bitter gourd, is grown in parts of India, Africa, Asia and South America. Its bitter taste is attributed to the quinine it contains.

Karela is supposedly an incredibly nutritious vegetable which cleanses the liver and purifies your blood. Karela juice, which you can squeeze out, holds many of its nutrients. Some people drink it like a shot. The juice contains a chemical called charantin which reduces high blood glucose levels and is said to be great for diabetics. It also aids weight loss, helps with digestion and stimulates the appetite. I think the last part can be attributed to the need to eat something, anything really, right after eating it.

I also found out that pregnant women should not eat Karela as it is said to cause miscarriages. But this is the internet, so there were also articles on its benefits for pregnancy. My (uneducated) advice is to skip it altogether. Better safe than bitter.

Finding a recipe for Karela was harder that I thought. The few recipes I found came from Indian cooks and involved stuffing the karela with a spicy mixture and frying it. Not one of them admitted to actually liking it, saying it was an acquired taste. I am yet to find anyone who has acquired its taste.

I used this recipe as my guide. I began by slitting the Karela on its side, scooping out the fleshy seeds and scraping the peel off. I then rubbed it with salt and let it sit for 30 minutes. This is supposed to reduce the bitterness. I then rinsed it, stuffed it with a spicy mashed potato and onion filling, strung some string around it to keep it closed and popped it into a frying pan to lightly fry it. 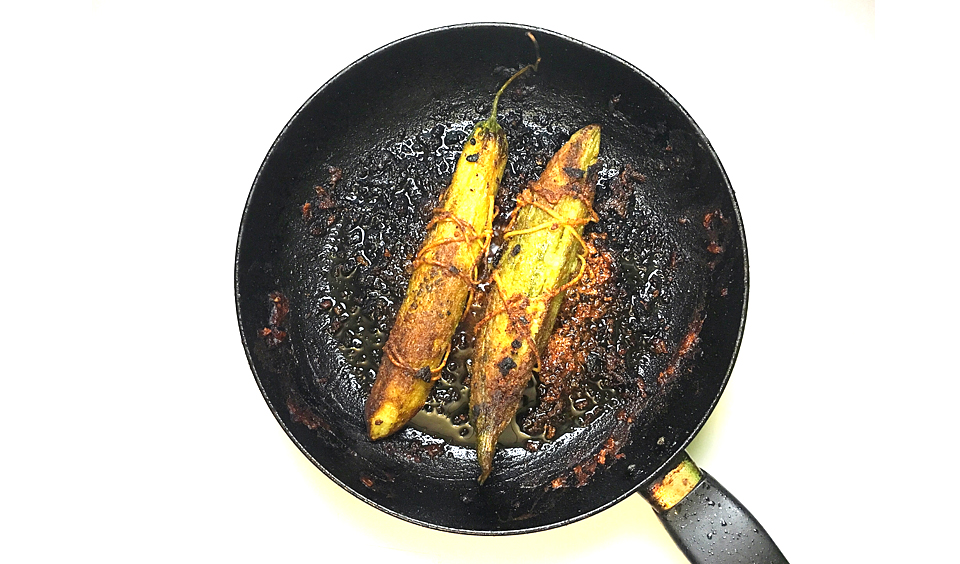 After over an hour they looked ready to eat. Turns out they are indeed bitter and not in a good way. The spice didn’t hide the bitterness and it was this unpalatable mash up of bitter spiciness. I made it through 2 slices.

It took me 2 hours from start to finish to prepare them and most of the time was hands on time. I’ll happily spend hours making food, but two hours for something that doesn’t taste good is about 120 minutes more than I’d like to spend. It also involved more oil than I was comfortable using. Turns out when a person who sells the thing is telling you not to buy the thing, you should listen to them. 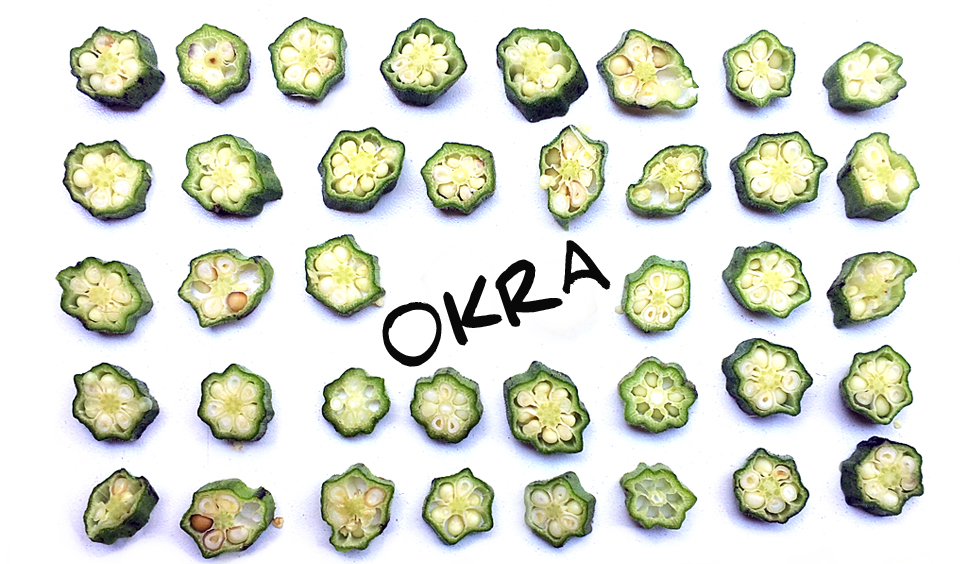 Okra was something I’ve seen before, but never tried.

Okra, also known as ladies fingers are incredibly low in calories, high in fibre and vitamins and minerals.

The pods are one of the rich sources of mucilage which helps with digestion. That mucilage substance is what gives them that slimy feel when I you cut them. A little too snotty for my liking.

Okra is seen in a lot of American Southern and Indian cooking. According to The flavour bible, it’s also big with Mediterranean and Moroccan cuisine. I went the Southern route and made corn okra fritters (recipe here)

I washed and sliced the Okra, added it to the fritter mixture and made it as one makes a fritter.  Being a neutral flavoured vegetable I could barely taste them but they had a slimy feel that I wasn’t a fan of.

Out of the 4 vegetables I tried Okra was the easiest to prepare and my favourite. I’m just not sure it was favourite enough to get again. 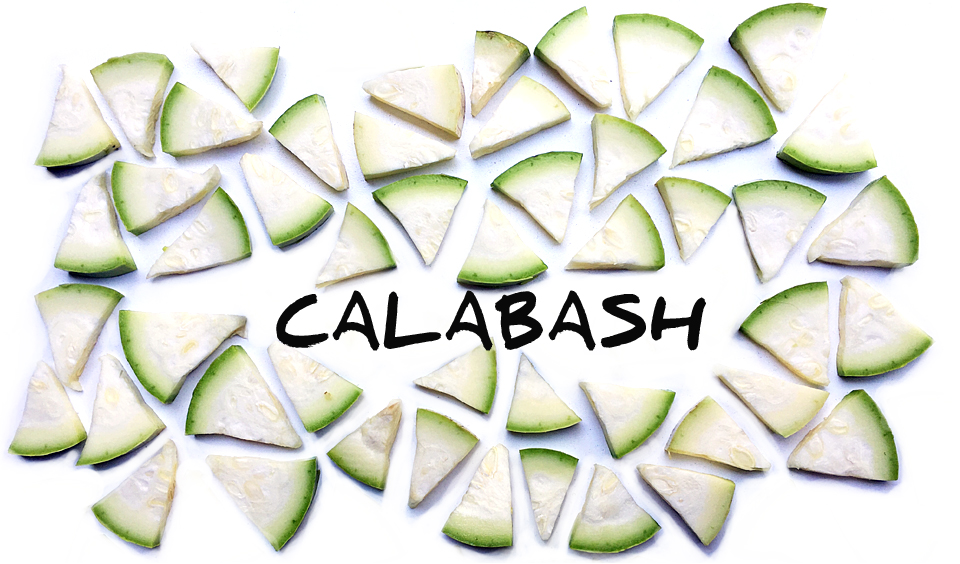 Another gourd. Calabash is also known as a bottle gourd or opo squash. Visually it looked like a thin bottle and I discovered that gourds were originally cultivated not to eat but to hold water. There’s actually a local company that makes interior decorations using calabash.

I should find out how they open it. The skin is thick and hard and requires a steady grip and industrial strength peeler. None of which I have. Instead I have one less layer of palm skin.

I wrongly assumed it was like a giant marrow and treated it as such. It was not. Part of it was grated and added to the Okra Fritters and the other half was sliced up and roasted.

It worked in the fritters, but baby marrows would be easier. Roasting it tasted similar to eggplant.

Calabash is not an easy vegetable to peel. Think a butternut squash times 100. Despite liking eggplant, I wasn’t mad on the taste. I’m considering making a vase out of one. 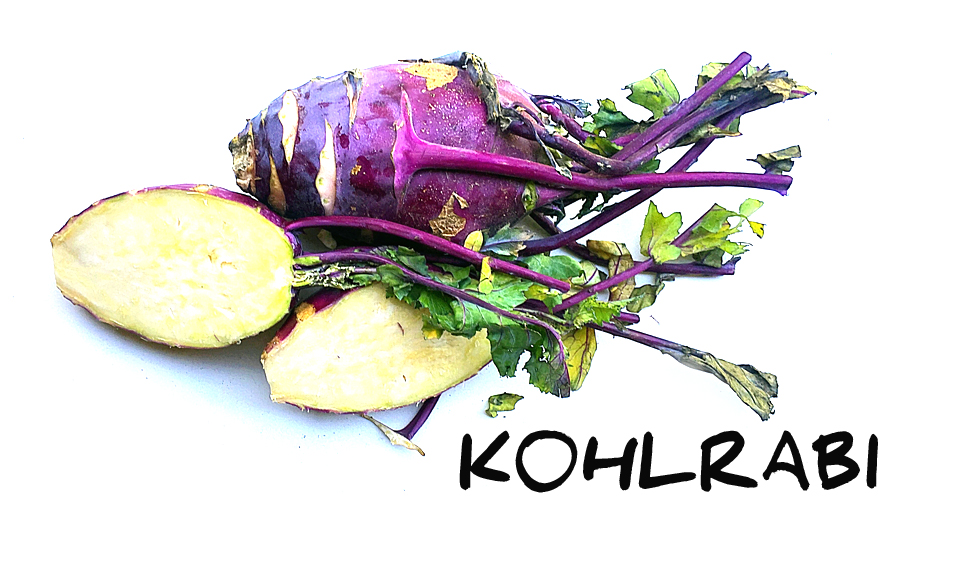 Finally something not green. Kohlrabhi comes with a white or purple skin. The ones I found were brilliantly purple.

Kohlrabi comes from the Brassica family and is compared to turnips, cabbage and Brussel sprouts. It is a low calorie vegetable that is high in fibre, vitamins and minerals. Like other members of the Brassica family it contains health-promoting phytochemicals – isothiocyanates, sulforaphane, and indole-3-carbinol – which protect against prostate and colon cancers. The tops are edible and contain a host of nutrients.

Kohlrabi can be eaten raw or cooked. It is seen shredded into salads, roasted or added to soups.

I’d strongly suggest selected petite Kohlrabi. One of mine was a monster and it was impossible to cut into.  The smaller ones are easier to cut and also sweeter.

Kohlrabi are not described as “woody” but the only way to describe the ones I got was woody. I began with an attempt to make a slaw with Kohlarabi and carrots. That mission was promptly aborted when I tasted a stick and could feel that raw it wasn’t digestion friendly for me.

I ended up roasting it into “Kohlrabi chips”. It took about an hour to get them cooked.  They both smelled and tasted like turnip but I struggled to eat it because of its woody texture. It reminded me of the bark left when you chew on sugar cane.

I managed to eat about 10 pieces before giving up. I left them on the counter and they were gone after a few hours. I presume someone enjoyed them.

I have a feeling I got a bad bunch. This isn’t a vegetable I’d seek out, but if it was in front me I’d try it again.

At the end of this, I came away with a paranoia that I forgot how to turn vegetables into tasty meals; and an appreciation of Maserchef contestants who seem to handle foreign foods a lot better.

Want us to try out more weird vegetables? List them below and we’ll add them to our shopping list.

Photography and styling by Nutreats®