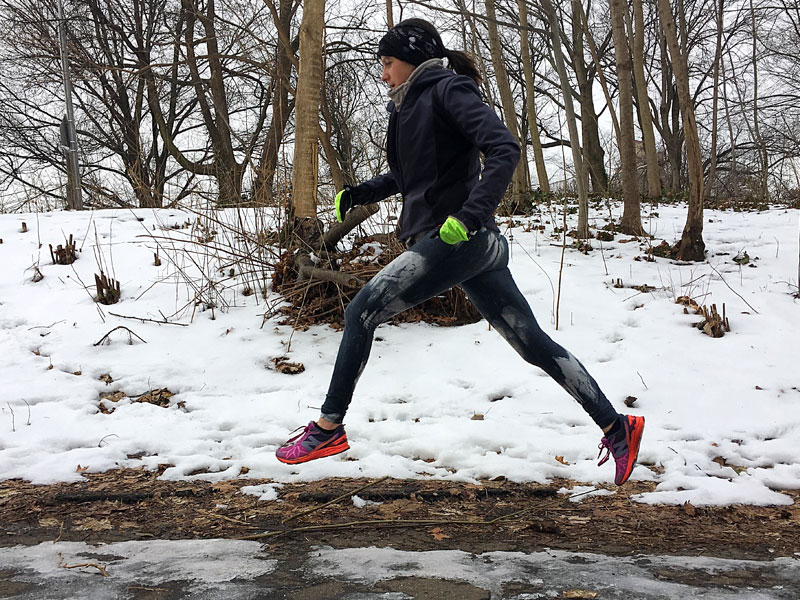 The best way to explore a city is on your own feet. I’ve never understood the appeal of tourist double decker buses that weave through busy Manhattan streets, while the guide points out landmarks.

My running clothes and shoes are usually the first thing I pack no matter where I go. And at the first opportunity I head out for a run, to explore a new place.

It was in New York that my love for running took off and I went from being a casually committed jogger to a dedicated, pace calculating slightly obsessive runner.

Running, specifically long-distance, has the beautiful magic of making places seem closer together. Distances become calculated by how long it takes you to run it, and if you can run it, it can’t be that far.

Having run the NYC marathon twice, I have quite literally run all over New York, stepping into every borough. But the roads the NYC marathon route uses are not the ones I did my training on, nor are they the places I return to whenever I am there.

These are the 5 best places to run in New York ; or if you’re more of a walker, walk.

There is a running loop that rounds around the entire perimeter of the park which is about 10km. alternatively, you can run the bottom two thirds of the park (cutting it by 103rd street) for an 8km loop. There are other walkways you can cut through to shorten the run, or if you want to opt for a more scenic walk, walk through the park instead of around it.

One of my favourite parts of central park to run is the path that loops around the Jacqui Kennedy Onassis Reservoir. It’s quieter than the outer loops and has stunning views of the city. The loop is about 2.5km and is great for sprint workouts. Avoid it when it’s wet or rainy, as the path is soft and gets muddy. It runs between 85th and 96th street, so you can enter the park there to get access.

Most races take part in Central park, which can either be incredibly boring or exciting if you want to improve your times on the same course. If you’re looking for an organised run, check out NYRR for listings.

Prospect Park in Brooklyn is another favourite running spot, and you can find organised runs there as well.

There’s a runners (and cyclists) loop around the park which is 5.5km long. Alternatively you can weave through the park or venture in the dog park if you want a prettier walk. The benefits of sticking to the loops are that it’s virtually impossible to get lost as you’ll eventually end up at the point you started.  There is a point in the park where there’s a small road you can directly cut through for a shorter run. Occasionally there’s a porta-loo there as well.

The actual pedestrian walkway of the Brooklyn Bridge is about 1.6km long, but factor in the distance you need to get there from a subway/train stop or if you’re running from your location.

Walking along the bridge, you’ll have views of the Statue of Liberty on one side and the Manhattan Bridge on the other.

For running, the best time is early morning when it is relatively empty and quiet. This was my preferred time, as aside from having more space to run, you get to watch the city wake up and go from relative stillness to a bustle. It’s also nice to incorporate running the bridge as part of a longer run, by running from your location to the bridge. Crossing it and then turning back and doing the reverse route.

For walking, sunset is a stunning time. It is incredibly packed then, so I’d avoid running. One thing to note is no matter what time you go, stick to the walking lane. Cyclists can be a bit aggressive and fast and you’ll likely get knocked down if you veer into their lane.

This long stretch of path runs from Battery Park all the way up to the Bronx for a total of 14km of uninterrupted running along the river. It’s great for long runs – there are a few public restrooms along the way and it’s flat. You can access it from anywhere so it’s also a good walking route. There are also a few playgrounds, tennis courts and basketball courts along the way.

Avoid running there during very cold or windy weather. Anywhere by water tends to be at least 5 degrees colder and a lot windier which can make for a very miserable run.

The highline is a linear park which is built on what used to be a section of the New York Railroad. It is just under 2.5km long, running from just below 14th street to 34th street. It’s accessible at various points along 10th Ave.

Being short and narrow, it’s more suited to walking than running. If you do want to run there, go early in the morning. During the day and even early evening it tends to be quite crowded. It offers great views, a chance to watch traffic (there is an actual traffic observation deck) and many benches to sit down, picnic or tan.

The Best Running Short For Women This Summer

The Best Running Shorts for Men this Summer