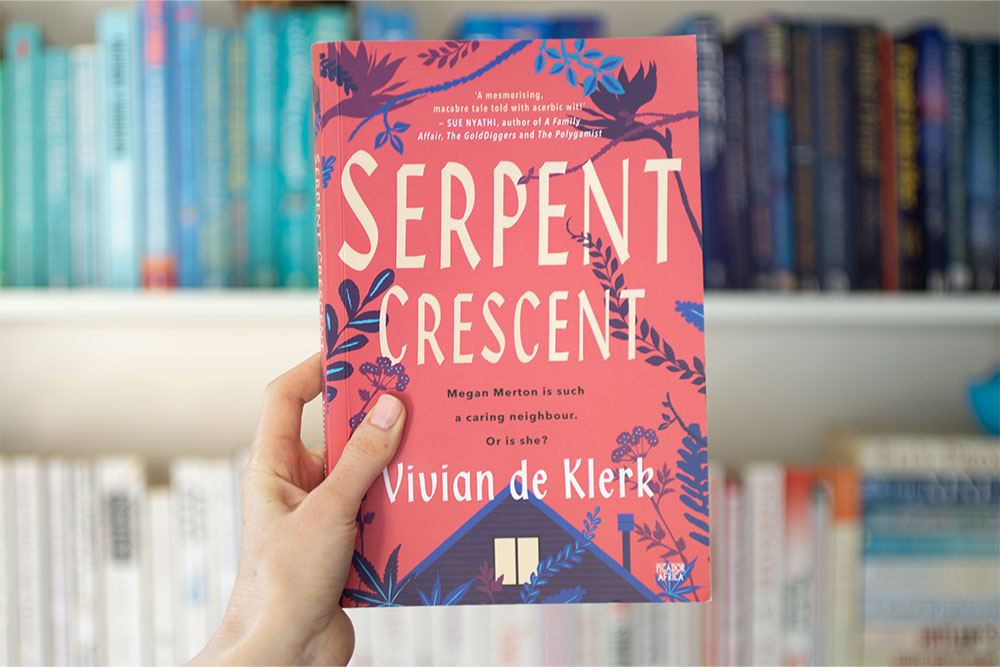 I read Not to Mention, Vivian de Klerk’s debut novel last year and was struck by how original the storyline was. The material was dark and disturbing, yet the main character was witty and bright, making it a captivating read. So, when she released her second novel, Serpent Crescent, I had to read it. Again, Vivian de Klerk has created a character on the edge of society, giving us another dark and disturbing book that makes you shudder but refuse to look away from because her storytelling is that good and she somehow manages to humanize a sociopath.

I got to sit down with Vivian, whose soft-spoken nature and “normalness” is a stark contrast to the main protagonists in her books. We talked about her writing, fascination with those on the edge of normality, her pivot from academia to fiction and her latest novel, Serpent Crescent. A novel which I now think about every time I take out the rubbish…

What was the inspiration behind Serpent Crescent?

There’s a seed of the place – Qonda – I made it up; but it’s very much based on the place I was living in and the frustrations of watching a town crumble. I had a good setting and I’m very into building a place and characters who are on the edges of normality. My previous book was about a young woman who is regarded as far too fat and this time it’s a sociopath – I’m intrigued by these phenomena.  This got me going on this character – Megan Merton –   she wasn’t fully formed when I created her.  She became clearer to me as I wrote and as I worked through how sociopaths grow up and how parents deny them or deal with them. How psychologists deal with them and diagnose them; and how they learn to hide and mimic and pretend so that they can do whatever it is they do.

Megan comes across as fairly unlikeable in the beginning, but she grew on me.

She becomes more humane; you start seeing bits of her humanity…

Yes, you see some empathy, some sympathies. I really enjoyed developing that.

Both of your books are about social outcasts. What draws you to making those characters the main protagonists of your books?

I find them much more interesting. You can weave stories around them and their experiences because of the unkindness of the world that tries to make everyone fit a norm. I spent some years being the dean of students at Rhodes University and during that time I became particularly aware of students that were unhappy, who were not coping, who were not accepted and that sparked an interest in me. I’ve always watched with interest how people who are denigrated and not included cope and how unequal society is.

Your love for linguistics and your educator background comes out strongly in both books. In Not to Mention there was the crosswords and in Serpent Crescent, Megan happens on all these wonderful words that she explains.

That’s me and my love of language. I came across this word epicaricacy which I didn’t know., it’s not the type of word you use every day. It sparked off this link to schadenfreude, which I’ve always had a fascination with. This word doesn’t have an English equivalent and yet it is a feeling that we recognize. I think the reader of this book might find some echoes of this feeling in the more trivial things that happen. In the way that Megan delights in sorting out the misdemeanors of her world. The words I had to work in through the backdoor. I made Megan an English teacher, but she couldn’t know too much about language because she’s a mere secondary school teacher. So, there she is going through people’s rubbish and there is her neighbor chucking out her lecture notes on Dante’s inferno and Augustine’s confessions. She has access to the best of knowledge and later the women who’s brain she can pick for information on what fascinates her – the 9 circles of hell.

What’s the process of getting into a character’s head, especially one like Megan?

I made her angry – angry at society, angry at psychologists for getting her analysis wrong as far as she’s concerned, angry at the town, angry at injustices as she saw them happen. I wormed my way into that kind of passionate feeling. I had to structure it around something, which was these 9 circles of hell, which are hierarchical. I put her into Serpent Crescent and thought I could make 9 people live there and that will help me slowly explore Megan Merton in terms of each of the people living in the various homes. But she handles them in a random and irritating fashion because she doesn’t think she’ll ever have a reader as she writes the book. It’s her confession, like the Augustine confession she found out about.

Both Not to Mention and Serpent Crescent are written like diaries of the protagonist, why this format?

It’s what I’ve chosen for my first two books because I find it feels authentic and I’ve become increasingly aware that there is a reader there and I want it to feel like it’s close to the person who is experiencing the life that is being told. I’ve been most comfortable clothing my pen in the first person. Although I’ve got two such first people in this book. I’m fascinated by how wrong our memories can be and how imperfect they can often turn out to be. Perhaps you can’t rely on the diarist -Katy Ferreira in Not to Mention and perhaps Megan Merton is not entirely believable. There should be a doubt, has she got her own truth right.

Is it a way to bring the reader closer to the main character because you begin to feel like you are reading someone’s personal diary?

Yes, too close for comfort. I had one person who confided in me that when they started reading this book, they thought it was my own memoir and they were very shocked that Vivian de Klerk had thoughts like that. Yes, there is the author that’s me and there’s the author that’s writing this memoir. There’s a slippery divide between the two because as the real author it’s my experience of the world that feeds my imagination and my intellect. I’m obviously going to draw on worlds that I know and personality types that I recognize and behaviors that I observe. That’s a big challenge for my writing – I’m not writing about anyone I know; I’m writing about everyone I’ve known.

How much of your own experience and your own self feeds into the characters?

Quite a lot of me goes into the major characters. So, while I have never been overweight, I have worried all my life about weight, so in that way I feel like I can relate to those sorts of issues. In the case of Megan Merton and Elizabeth Cardew, there’s a lot more of me in the academic Elizabeth.  I know that world so well, I feel comfortable in that zone. There was a lot of discomfort when I wrote about Megan because she’s shocking.

The automatic assumption is that she must have had a tempestuous relationship with her own mother – that’s not the case. I had a very normal childhood and normal mother. I have simply read widely and have an imagination. I feel comfortable writing through the eyes of a daughter. Megan idolizes her mother and wants her for herself and ultimately failed to win her over. Her mother was the only steady truth for her and remains somebody who she thinks loved her back.

Coming from a very academic background what drew you to writing fiction?

I’ve been reading my whole life and loved reading. I studied English and linguistics, so my passion was language. I’ve written many books and papers on linguistics – I’ve played the game; I know the rules. I could have gone on doing that, but it became stultifying, repetitive. Every time you begin a paper you need to prove you know the players in the game. You need to cite, reference. Before you get to your point you need to prove you’re up to date and then you put something new and there’s your article and it gets published. For me it became not sufficiently interesting. I was in a position where I had a good pension waiting for me and a husband with resources, so I stopped early and said I’m going to write fiction. I made a conscious decision to write. I started with short stories and could feel myself getting limber and into vein I wanted to get into. Dark always, I prefer the darker side of humanity. I inflicted all those short stories onto my family members for Christmas and that was when I started writing Not to Mention. I loved making things up and not having to prove anything – it’s freeing. In the academic world your peers judge your work and if it gets the nod it goes into the journals. Your fiction is more personal – putting that out there and having people assume that is you. Because people do mistake the material for the authors life.

Are there any lessons in Serpent Crescent you hope a reader takes out?

The one lesson that immediately comes to mind is the struggle that Elizabeth Cardew undergoes in getting her language back after having it suddenly taken from her after a stroke. The determination she applied to getting it back and reincarnating herself – there’s a lesson in that but it wasn’t intended to be. It’s just something hopeful one can take away from the book.

Serpent Crescent is  published by Pan Macmillan is out now everywhere good books are sold and online here.

On Our Bedside Table: Friends, Fans, Outcasts and Shadows