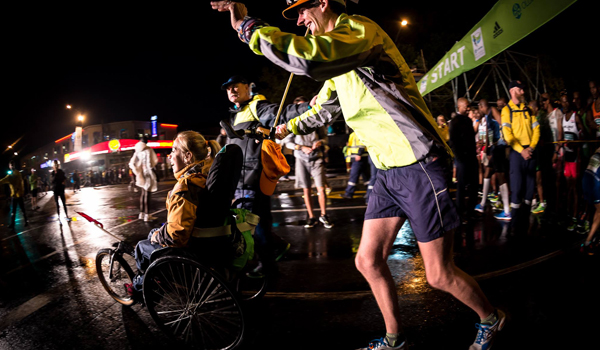 The Naked Truth About Diabetes

This was Hilton’s 12th run and Anita’s 1st. They were just two of the 10 000 plus runners doing the ultra. Had you been at the finish line you probably wouldn’t have noticed them, save for one thing…

As they crossed the finish line, they made history.

A B.Com Management Accounting student at the University of Stellenbosch; Anita Engelbrecht lives by the motto “Only those who attempt the absurd will achieve the impossible.” More than just words, this is how Anita has been living her life since day one.

Born into a family of runners, Anita spent her weekends like most children of runners:  At the finish line of races, waiting. Unable to run herself, Anita became the family’s self-appointed team-manger.

In 2015, Hilton Murray, an old family friend approached Anita to take on a new challenge in a jogger, which they refer to as “Blitsie”, with him. Unhesitatingly Anita replied “yes” and with Hilton pushing her, they completed their first race as running buddies – the Moore Stephens 10km race in Stellenbosch.

“It was a wonderful experience to be part and parcel of the running culture for the first time.  The sound of running shoes hitting the tar was like music in my ears.  I felt the impact as well as the rhythm and was immediately hooked for life”.

Over the next few months, with Hilton behind her, pushing her along, Anita would complete 3 marathons and qualify for the Two Oceans Ultra Marathon. Hilton’s idea quickly became “theirs” as they took on more races.

“Hilton phoned me and suggested [Two Oceans] and I was immediately more than eager to do it.  He knows me well and knew that the Two Oceans Ultra would be perfectly in line with my love for action and adventure”.

Running 56km solo is no easy feat, running while pushing a jogger is that much harder and would have any runner sweating. Not Hilton. Hilton has been a runner for 34 years and has previously completed 10 marathons in 10 days. He is in tune with his body and maintains the training he knows works. To get used to the ins and outs of jogger running, he did a few more races with Anita.

With entries and qualifying times, Hilton Murray and Anita Engelbrecht were ready for Two Oceans. Two weeks before Two Oceans, they realised that a rule had been changed and that they needed to submit a special application for Anita to take part in the Two Oceans Ultra Marathon as a wheelchair entrant. Too late to apply, they had to approach the race directors directly.

“We had a very positive meeting with the race organizers and chair-person of the Two Oceans marathon and cleared up uncertainties”.

Two Oceans fully embraces their theme “run as one” and made the changes necessary to allow Anita to take part in the race, and become the first wheelchair finisher. It was agreed that Anita and Hilton would be part of a pilot project to practically assess the experiences of a wheelchair athlete in the Ultra Marathon. An opportunity Anita does not take for granted.

Anita and Hilton lined up at the front and set off 10 minutes before the start due to safety concerns. Despite the challenges of pushing and pacing up a steep incline, Hilton got them to the finish line within his predicted margin of 6-7 hours.

“The start was a once in a lifetime experience even though we started 10 minutes before the official start and ran on our own for the first 3 kilometres.  The spirit of the spectators and runners is difficult to describe to somebody who has not yet experienced it.  The support was amazing.  The view from Chapman’s Peak was awesome.  Going up Constantia Neck I once again saw what endurance looked like.  When we crossed the finish line, I was ecstatic.  The thankfulness and sense of achievement were overwhelming”

For Hilton, this year’s race was his best experience ever by quite a margin. The response from runners and spectators throughout was overwhelmingly positive.

“The runners along the route were very appreciative of what Hilton was doing and so were the spectators.  Everybody cheered us along and showed and shouted their support.  And after the race congratulations and words of appreciation overwhelmed us”.

Aside from the personal achievement, Anita and Hilton made a huge stand for those who are differently abled.

“This was certainly the most exciting and most beautiful race I ever did.  It was also an opportunity to challenge people’s perceptions of disabilities and to celebrate the fact that I could take part despite being differently-abled”.

Anita and Hilton are not done yet. Championing the causes of two charities, they plan on breaking more barriers. Hilton has been running for the Pink Drive’s Breast Cancer Awareness for three years. While Anita races for the Chaeli Campaign. The Chaeli campaign have been involved in getting wheelchair acceptance in South African races.

Those two charities were instrumental in getting Two Oceans to allow Anita to be a part of the race. They are also standing behind them and assisting with their next big target – the 2016 Comrades Marathon. Anita has not been accepted as a jogger runner yet, but they are confident they will get in.

In response to any concerns over opening major races to wheelchair athletes, Anita is practical about what it means to do an ultra in a jogger.

“The races will not suddenly be swamped with wheelchair users, as it is not every wheelchair user’s desire to take part in these races.  If parents can push their babies and toddlers in joggers without it being a problem on the shorter routes, I cannot see why it should be a problem on the longer, especially ultra routes.  It is a tall order to get yourself across the finish line in an ultra marathon.  I am sure that there will not be too many people being prepared to push another person over that distance”.

Anita Engelbrecht and Hilton Murray are now running for more than themselves.

“It is good for Anita, me and the Running sport in general to have an inspirational, young and differently-abled athlete like Anita in the races. It gives hope and inspires.”

They hope that in the future it will be more common to see more people with disabilities tackling races.

“I would love to see people with disabilities taking part in races, especially people who use wheelchairs.”

Buckwheat Crepes with Pomegranate and Figs

The Naked Truth About Diabetes