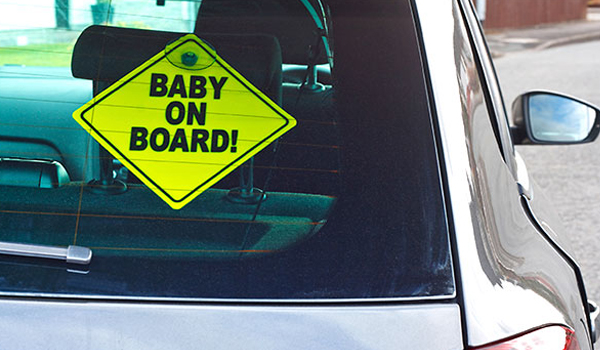 Yellow, square and obnoxious are words that would describe the “Baby on Board” signs tacked onto the back windows of cars.

Despite their popularity, they annoy many with the apparent declaration that having a baby means everyone around you needs to give you special treatment.

Curious, we did a little digging and discovered where these signs came from and the reason they should be on cars.

Unlike those family portrait stickers (or as some like to refer to as an invitation to kidnappers) which have over taken the yellow stick-on signs in popularity,  the Baby On Board sign is there for a very good reason.

Urban Legend has it that a death of a baby in a car accident led to the creation of the sign.  The actual origin is less morbid. An American women spotted them in Germany, decided to make them and market them in the US. Her company was bought out and renamed to Safety1 – which is the ones we’re most familiar with.

And the reason for putting them on your car’s back window? There are two reasons we uncovered.

In case of an accident, the sign can alert emergency workers that a baby, who may not be able to call for help or get themselves out, is in the car.

However, in order for this to be effective parent should only put the sign up when there actually is a baby on board.

And this is what that Baby on Board sign really means.

Baby on Board signs are actually a safety feature and not a humble brag.

Tell us, now that you know, are you more likely to put a baby on board sign in your car now?

10 things to know about Water on World Water Day

How One Family is changing the Way we see Down syndrome