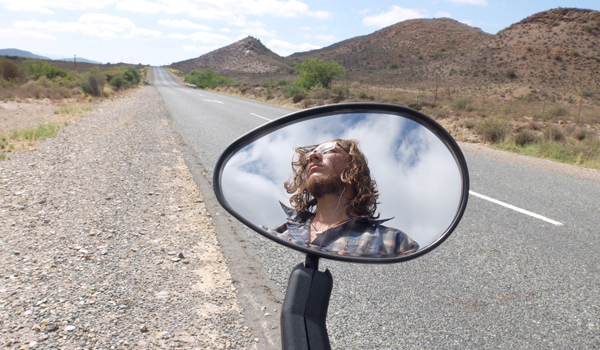 A few nights ago I found myself in the middle of a trail in the darkness of night, drenched to the bone from the outpouring the skies decided to unleash, on the night I had volunteered to marshal a trail run. As I stood in the harshness of nature, I knew that in a few short hours I would be dry in the safety of my home. I’d have a warm meal in front of me and my bed a few steps away. The miserableness of that moment would be a distant memory. My thoughts drifted to Bernie Theron. Where was he now? Was he safe? Was he hungry? Was it raining?

I was first ‘introduced’ to Bernie Theron when I attended the FEAT talks last year. I heard him relive his solo trek through Iceland and a lot of what he recounted resonated with me. At the end of his 27 day solo trek, as read from his journal, he mused

“Happiness is not found at the end of an adventure – but rather during the endless journey that is wishing for its end.”

Perhaps this is why he set off again?

“I would say it truly kicked in when I finished my first solo adventure hiking down the east coast, but I have loved the outdoors for much of my life.”

It was during that hike that he built up his motivation for his Iceland trip.

“That’s where the bug bit and I knew I had to do something bigger and better, and after weeks of research and ideas I ended up going to Iceland.”

His stint in Iceland thrust him into the spotlight. It won him the Mountain Club’s Supertramp 2014 award and the Nightjar Adventurer of the Year Award.

“I was not known at all before my Icelandic trip and it was my way of showing what I am capable of. The awards helped me along in the adventurous path I’m taking. It also showed me something important;

What I was doing was not normal.

Before the awards I did all my adventures just because they made me happy – I did not think I was doing anything special. It showed me that I was “on to something”.

On the 20th of February (2016), Bernie Theron set off again on his next adventure. This time he amped up the 1 month to around 9 months, and added a bicycle and a cause.

“This trip came about in small steps. Firstly I discovered I had a platform where I could inspire change in people. I felt that it would be a waste not to use my platform.

The question was what do I want to change?

It was an obvious answer. I wanted to make a personal difference in the fight against our greatest threat – Climate Change. I decided I would dedicate my next adventure in this field. One thing led to another and now I’m sitting in a one man tent in the middle of Lesotho…”

His plan is to cycle through 11 African Countries, Solo and unsupported. Together with Greenpop and his own brainchild, Wild factor, they plan to plant at least 22 trees in each country Bernie visits.

He has called this mission “The Wild for Change Expedition” which won’t just be a planting trek through Africa. He will need to cycle roughly 13 000km, hike 1000km and paddle 600km. Each country will also represent its own set of adventure and danger.

When he completes the Drakensberg Grand Traverse, which he began 5 days ago, he still has the enormity of exploring the Nyanga National Park in Zimbabwe. Hiking Mount Namuli in Mozambique. Kayaking across Lake Malawi (which he is most looking forward to after the Traverse). Climbing Volcanoes in Tanzania. Hiking Mt Elgon/Lake Turkana in Kenya. Trekking across the Sau Pans in Botswana. Climbing Brandberg in  Namibia, and a whole lot more. 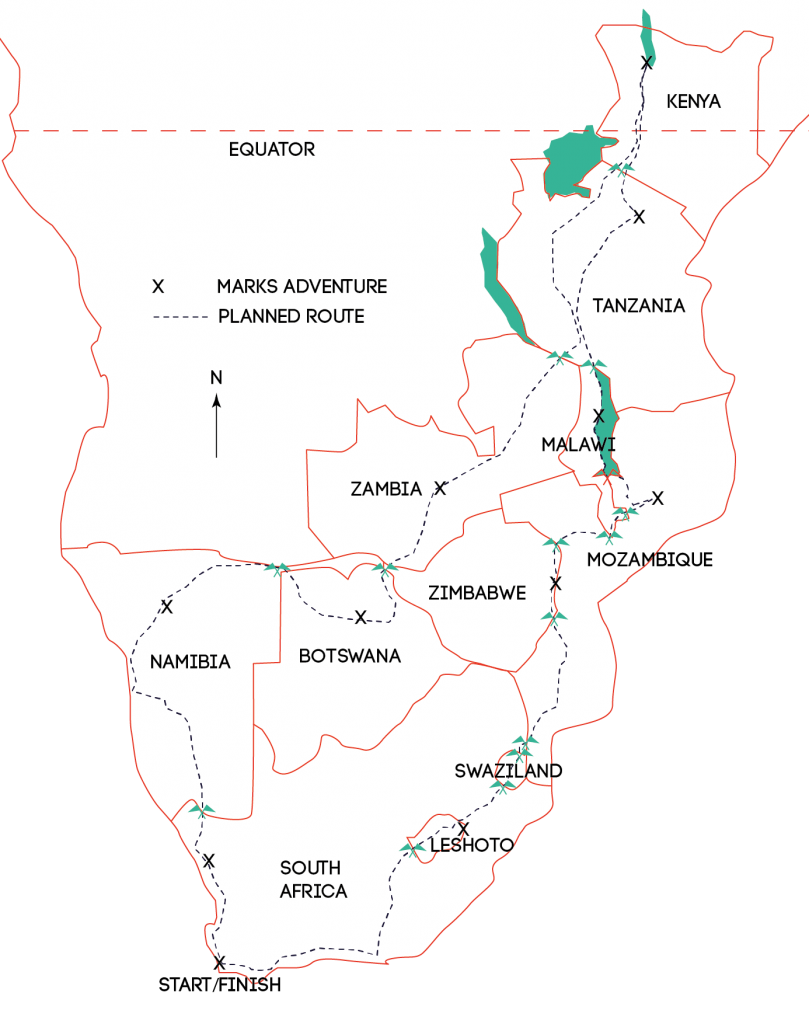 In just the first six hours of his trip, he foiled two mugging attempts before being robbed of most of his gear.

“The unknown excites me but I am mostly scared of people and crime… hopefully I won’t get mugged again!” 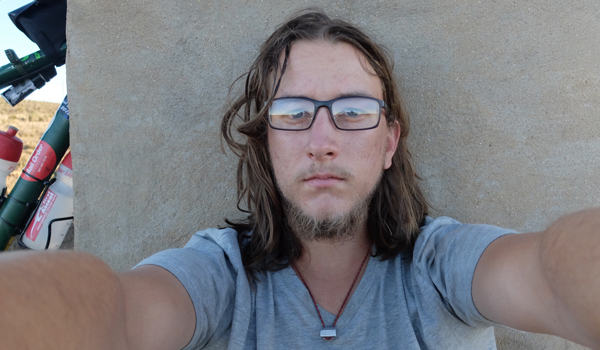 Mugging isn’t the only tough possibilities he faces on this journey, but for him, no matter what he encounters, there is no quitting.

“When the going gets tough I just have to slog on… I enter these adventures with a no return policy which helps me push through the bad times. But while it’s bad, I normally try to listen to some Music, like Ben Howard, or I think of what I would have been doing in Pretoria in other circumstances – which is very little – so that mix normally keeps me up and going.”

The support he has received also keeps his going, but he has also received a share of negativity.

People are extremely ageist, which gives me a lot of criticism. Luckily I don’t really care what cynical people think. The support [on the other hand], has been amazing so far.

I have met a lot of amazing people along the way who have helped me with food, accommodation and repairs. People open their heart and homes for me which I am endlessly grateful for. I am also grateful for all the financial support people have offered me so far, every bit helps!”

You can’t help but wonder what motivates someone like Bernie Theron to give up regular life and the comforts we all rely on – to adventure for a cause. Why do you have to attach a ‘crazy’ expedition to a huge environmental issue such as climate change, to make it more visible?

“In the end I am just trying to be another piece of the bigger puzzle that is the fight against the progression of climate change. I hope that by giving it exposure as a worthwhile issue and by trying to raise funds for a proactive solution will be a big enough puzzle piece to make a difference.”

“When things are not going my way I start questioning my motives to leave everything behind, but that doesn’t happen often.  [I know that choosing a journey like this has implications].

I will be on my own for multitude of days, sleeping on hard surfaces and eating half cooked pasta and tuna. I know I will definitely miss a soft bed and a fridge full of food,

Five days ago before he entered the Drakensberg Grand Traverse, he was excited.

“I have waited for this trip for a long time so I’m very excited to start and explore my favourite mountain range! It does not really scare me, I am well prepared and I know my limits so these stretches do not scare me too much. But maybe it should. My family is supportive which helps a lot but they are definitely worried.”

Once he exits the mountain range, expect to hear from him again. To keep track follow his Facebook page. “I keep people updated on my travels as often as I can. I post photos and daily or weekly snippets of my travels.” 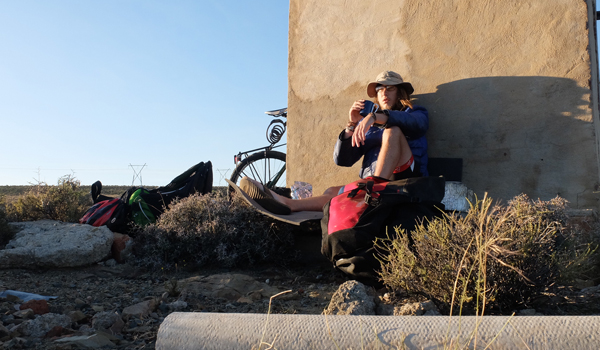 You can also donate to his cause over here. “Funds donated go directly to Greenpop, a social enterprise who specialises in planting trees in South Africa and Zambia against the threat of deforestation and Climate Change.”

While I was cowering on a trail waiting for a mini storm to pass, Bernie Theron was sitting in Lesotho watching a slow moving thunder storm move closer to his location.

“Waiting for a storm to hit is what I live for. I love the waiting game, wondering how much time I have left before MY body will be exposed to cold, windy and miserable conditions. I love the race, and when it hits… Aaah, when it hits you’re alive! Every choice you make is an important one, and when you’re making important choices that impact your safety – That’s when you know you’re alive.” 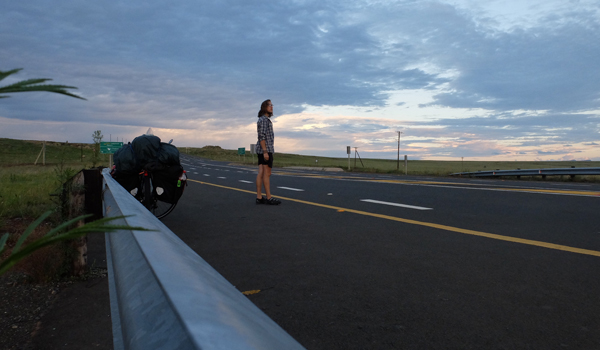 The 6 Key Relationships in our Lifetime

How to Fuel for Multi-Stage Events

Preparing for an Ultra adventure