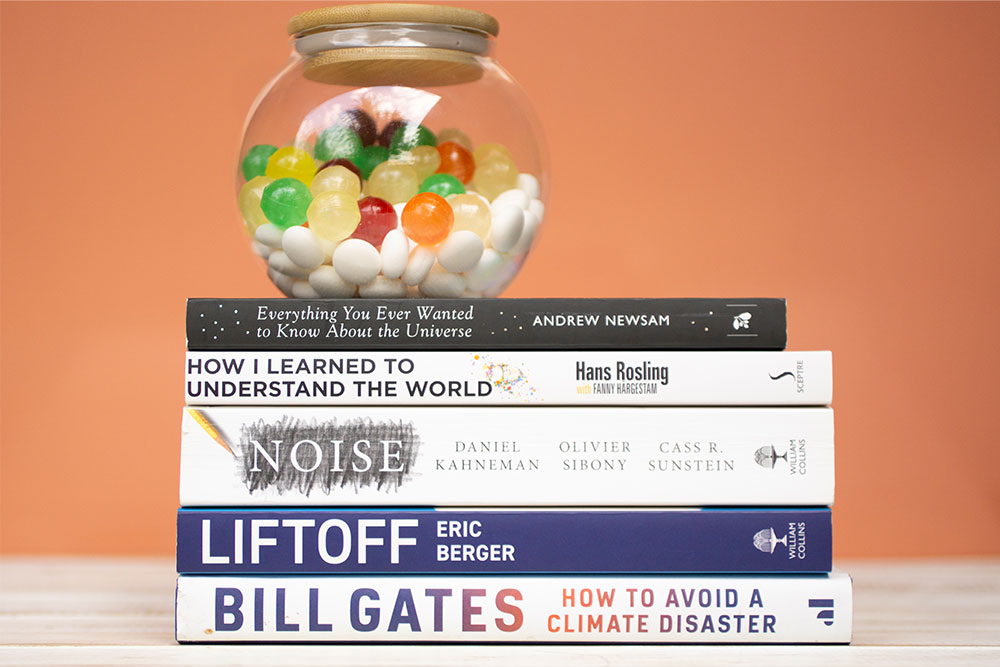 Why Going to the Hairdresser is Like Going to Therapy 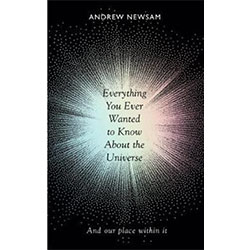 Andrew Newsam is Professor of Astronomy Education and Engagement at Liverpool John Moores University. In addition to astronomical research and education, he is a keen science communicator. He gives talks to thousands of school children, amateur astronomers and the general public, to bring the delights of astronomy to as many people as possible.

In Everything You Ever Wanted to Know About the Universe, Professor Andrew Newsam draws on his vast expertise to show us what’s going on beyond the limits of our planet, from our solar system to distant galaxies and what this tells us about own place in the universe. 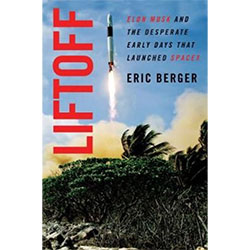 Liftoff chronicles the early days of Space X, from Elon Musk’s initial idea, hiring the very first employees, the gruelling work days, all the way to a successful rocket launch after a string of failures.

To write the book, author Eric Berger draws on his exclusive interviews with Elon Musk, and past and present SpaceX employees. It is the first time Elon Musk consented to telling the story of SpaceX in full and allowed a writer free rein inside the company to speak with employees about the formative years.

It is hard to walk away from this book without a sense of respect and awe for what Elon Musk accomplished with SpaceX. He took an enormous risk in pouring millions into a company because he saw a huge hole in the space industry that he wanted to fill. In a nutshell, he literally changed the space industry from being government controlled to being an industry in which private companies could hold space. He reduced the cost of space flight and made stage 1* of rockets  reusable. Something which had seemed impossible  has now become industry standard. He did this by creating a culture where failure was an option, where action was favoured over words and where employees were given autonomy – and chose to come work for a company where they had to work insane hours for less pay but got the chance to disrupt an industry and do what they loved.

Credit must be given to Eric Burger and his story telling ability.  He creates a sequential story pulled from interviews from Space X employees in a way that gives the reader a 360º view into the story; from entrepreneur to first hires, from managers to interns. Being able to put together all those interviews from so many people and have each person’s story told in one concise book is a hard task. It’s a fascinating read and one I thoroughly enjoyed.

*Stage 1 disconnects from Stage 2 when the rocket reaches a certain height and then falls back to earth either exploding into the atmosphere or sinking to the bottom of the ocean. SpaceX worked out a way to track where stage 1 landed and reuse it.

It was a high drama situation. It is a great story. But it is way better in recollection than at the time.

How I Learned to Understand the World by Hans Rosling 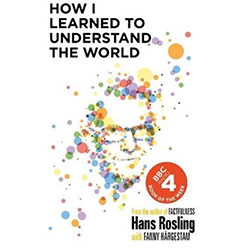 Written with Fanny Hargestam, How I learned to Understand the world is the remarkable story of how Hans Rosling, a medical doctor, became a revolutionary thinker and the most popular researcher of our time.

This book was written in the final months of Hans Rosling’s life and in reading the afterword by Fanny Hargestam, it’s hard to not imagine how much thicker this book would be if he had had more time. That being said, being able “to sum up. To focus on what had been, rather than what the future might bring” is a blessing.

It is written with the same charisma that punched through every page of Factfulness and it provides so much context to Factfulness, which is a must read and will change the way you think about the world. This book helps explain how he became the person who was capable of sharing so many profound lessons on the world. It is a true memoir.

If you are secure in a relationship you are set free to move in space and thought. 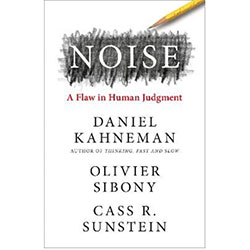 Wherever there is human judgement there is noise and this books seeks to show how noise produces errors in many fields including medicine, law, economic forecasting, child protection and hiring. It’s a chunky book that comes in 6 parts;

Part 1 explores the difference between noise and bias.

Part 2 investigates the nature of human judgement and explores how to measure accuracy and error.

Part 3 takes a deeper look at predictive judgement and if rules, formulas and algorithms are better than humans when it comes to predictions.

Part 4 looks at human psychology and why people are oblivious to noise, and oftentimes unsurprised by events and judgements that they could not have possibly predicted.

Part 5 explores the practical question of how you can improve your judgements and prevent error.

Part 6 explores the question “what is the right level of noise”.

In the interest of full disclosure, I must share that I struggled through this book. I found it hard to read, even harder to understand and would often find myself at the bottom of a page not sure of what I read. The topic sounded interesting – which is why I picked it up, but in my view the authors failed to translate their research into a concise and interesting book – and in my opinion, the book itself was noisy. Not noisy in the way they describe, which is “the undesirable variability in judgements of the same problem”, but noisy in that there was too much information and that information was difficult to follow.

What makes books like this good for me is the author’s ability to translate jargon into language someone without their background, knowledge and expertise can understand – and this book lacked that readability.

It’s rare that I walk away from a book feeling like I’ve learned or absorbed nothing, but I struggle to find anything that stuck or resonated. In writing this review, I went through pages I had tagged and something I had tagged stood out to me as perhaps a reason I didn’t enjoy the book. Affect heuristics is a term to describe prejudgements and explained as follows: “People determine what they think by consulting their feelings. We like most things about politicians we favour and we dislike even the looks and the voices of politicians we dislike.” Almost immediately, I commented that this book was a stats book – filled with statistical jargon and not just stats – quantitative stats. I would repeat a variation of this thought throughout my reading. Stats was one of my worst subjects at school. I’m not a numbers person and when given the choice between quantitative and qualitative research, I always chose qualitative which has a “story-telling” element to it. So perhaps I did take something out of this book and that is my feelings towards stats is clearly so strong that a book heavily filled with stats and noise and numbers is not a book I could enjoy.

How to Avoid Climate Disaster by Bill Gates

Published by Allen Lane, an imprint of Penguin 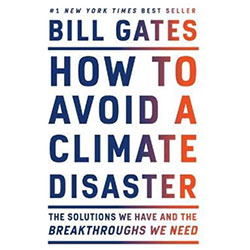 To stop global warming and avoid the worst effects of climate change, humans need to stop adding greenhouse gases to the atmosphere – we have to reach net zero. In How to avoid Climate Disaster, Bill Gates explains why zero and what needs to be done to reach this seemingly impossible task. It’s broken down into 4 parts;

In part 1 he explains why we need to get to net zero and how rising temperatures will affect people around the world.

In part 2 he explains climate change in an easy to understand way that will enable you to have informed conversations around it.

In part 3 he breaks down how technology can help – both the technology we have today and places where innovation is needed.

In part 4 he proposes a plan based on guidance he’s gotten from experts. The plan includes both governments, business and individuals.

Bill Gates does a great job of taking a topic that is often filled with confusing jargon and an overwhelming amount of information, and breaking it down into a way that is easy to understand and interesting. It’s one of the best books on climate change that I’ve read and that is because he uses an educational tone, not a fear-mongering one. His passion for the subject and for explaining and teaching it comes through and makes it a book you want to read and learn from; and one that you can without needing to pull out a dictionary or pause after a page.

It is both hopeful (the advances that are happening and his belief that it is a possibility) and  depressing (electric cars or anything green-electric really does not seem like an option in a country where electricity supply is anything but stable); and a recommended read for anyone who wants to understand climate change better, what actually contributes to greenhouse gases and what needs to be done.

The climate is like a bathtub that’s slowly filling up with water. Even if we slow the flow of water to a trickle, the tub will eventually fill up and water will come spilling out onto the floor. That’s the disaster we have to prevent

How to do Facial Cupping at Home

Why Going to the Hairdresser is Like Going to Therapy