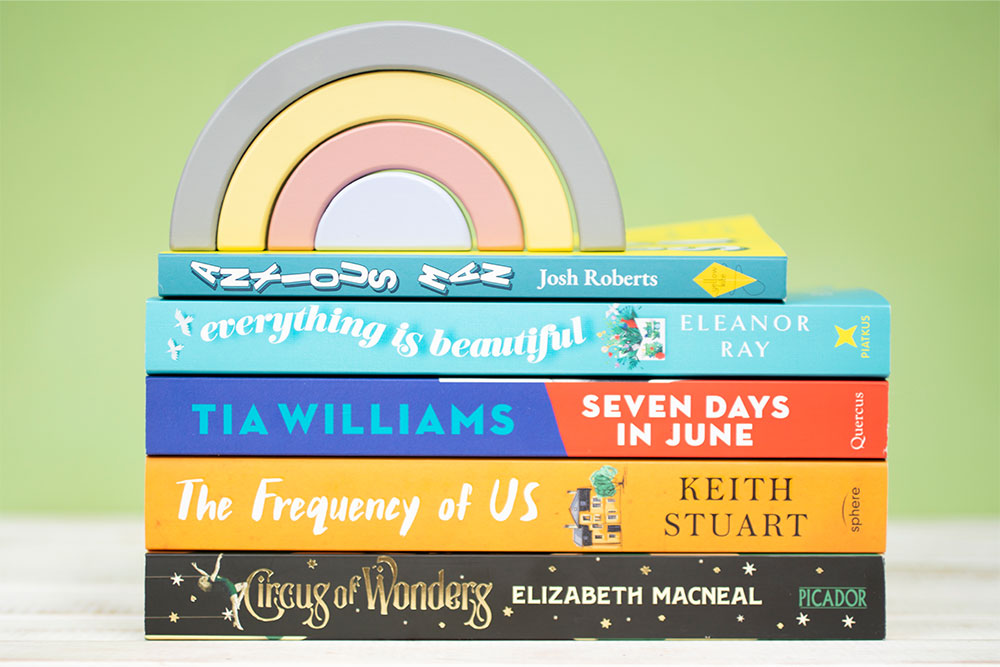 Everything is Beautiful by Eleanor Ray

Amy Ashton lives alone in a home overflowing with objects, the like only seen on an episode of hoarders. The objects she accumulates and cannot bear to throw out – empty wine bottles, broken pots, newspapers – are items she loves, items that remind her of the past, a happier time. Her things control her life and have made her a prisoner in her own space. As Amy is trudging along life, a family moves next door and a chance discovery unearths a mystery that begins to unravel Amy’s carefully curated life. She is pushed to confront her past in order to let go and get to a future she deserves.

This novel flits between present and past and uses objects she has kept as the anchor of the plot and the keys with which to reveal another room. I picked it up after a bout of reading heavier books, craving something light and fun. This book was exactly that, it was a light, charming and fun read I gobbled in a day. Despite the lightness of the book, the plot doesn’t read as fluff. Woven throughout are lessons on the value we place on things, how clutter holds us back, living our potential and opening oneself up to people and help.

The back of the book states that it’s perfect for fans of Eleonor Oliphant. I would add Maggie McNoughton’s Second Chance to that list as well. They all have quirky, socially awkward female protagonists who have an endearing quality about them, that makes you cheer for them as they grow into themselves and open themselves up to the world.

Everything is Beautiful is the charming, quirky book to add to your summer reading list. 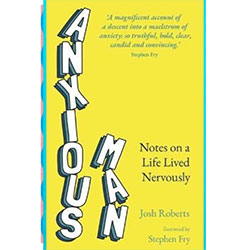 Described simply as notes on a life lived nervously, Anxious Man is Josh Roberts’s account of being diagnosed with General Anxiety Disorder (GAD). His breakdown happened seemingly out of the blue, after a night of partying. In an instant he went from being a fun-loving twenty-something to a hot mess of nerves, tears and crippling anxiety. After visits to 5 different doctors, he was finally diagnosed with GAD and started his road to recovery which included therapy, medication and lots of time spent mending his mind and learning to live alongside his Anxiety.

Despite the subject matter being quite dark, there is a lightness and humour to which Josh Roberts tells his story. It’s written with personality – brutally honest, humorous and conversational. He tackles mental illness from the personal perspective often lacking in books on the subject and without confusing jargon. He also speaks frankly about medication and his choice not to rely on pills, which may dull experiences and feelings he wants to feel.

While anxiety is being spoken about more and more, there is still a male voice lacking and he brings that voice to the conversation. He reveals how much anxiety does affect men who mostly suffer in silence. This book gives a space for people to not only see themselves or friends in his story but to be able to acknowledge, share and seek help for their own problems.

Anxious Man is a useful read for anyone dealing with anxiety or for those who have loved ones who suffer from anxiety. Particularly for millennials, which Roberts is and which he describes as a generation with the belief that the grass is always greener, that there is something better out there. It aptly describes what living with anxiety is like and offers some guidance on how to both live with it and be there for those suffering from GAD.  It’s also a short, easy to read book making it less intimidating and more welcoming.

It feels like my generation is much more professionally restless than those before us. We seem to be more demanding, more impatient. For our parents, a ‘job’ was a series of tasks that you did for money. That’s not enough for us. We want those task to make us happy, too. And we want to do them on our own terms… Some folks think it’s because we’re entitled, unwilling to graft and spoiled. I don’t agree, particularly with the last one. My generation might have grown up with computers, but we’re also poorer than our parents, more unemployed; more indebted; less likely to own a home; less likely to have a pension; more likely to be chronically lonely; and more likely to kill ourselves. How that qualifies as ‘spoiled’ is beyond me. Instead I think it’s to do with our belief that there’s always something better out there. We’re plagued by this looming sense that the grass is always greener. 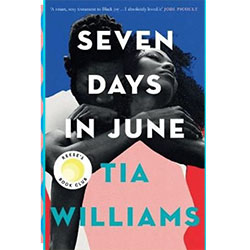 Single mother and bestselling erotica writer, Eva Mercy is feeling pressed from all sides when an encounter with a long lost love whips her existence into disarray. When Shane Hall, an award-winning novelist turns up a literary event she is on a panel for, they pretend they don’t know each other but sparks fly and the lasting impacts of their crazy week of being in love 15 years prior hangs in the air. As they reconnect over the next seven days, Eva grapples with her present and future while trying to come to terms with the past and what really happened that ended it all.

It took a while for me to get into this book due to the informal, almost conversational style writing but eventually the story won me over and I was invested enough to see it through in one weekend sitting. The characters are vividly portrayed, Eva’s daughter Audre being my favourite, and the storyline, although not groundbreakingly profound was still interesting. I’d classify this as a light easy reading novel.

Circus of Wonders by Elizabeth MacNeal 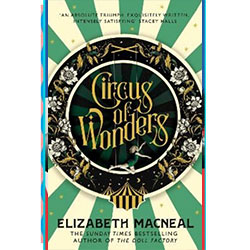 Circus of Wonders is a historical novel set in the 1800’s that moves between the Pleasure Gardens of Victorian London and the battle-scarred plains of Crimea.

Nell, our main protagonist lives in a coastal village in Southern England where she picks violets for a living. Her birthmarks which speckle her pale skin with large brown circles ostracise her from her community, confining her world to that of her beloved brother and the sea she adores.

But when Jasper Jupiter’s Circus of Wonders rolls into town, Nell’s life changes. Her own father sells her to Jasper as his very own leopard girl, the biggest betrayal of her life, and she is forced to perform in the circus.

It is in the circus, however, that Nell begins to come into her own. Her fame grows as she becomes the main act of the Circus, described by London newspapers as the eighth wonder of the world. She finds friendship with the other performers and love with Toby, Jasper’s brother.

The circus seems to be the best thing to happen to Nell, but as her fame threatens to eclipse the showman who bought her and her love for Toby threatens to break the bond between the brothers, her new world is threatened.

I loved this book. It is superbly written, entrancing and transports you to the time known as The Victorian Freak show, which traded physical differences as entertainment. While Nell is the main protagonist, the story is told through the vantage point of three people – Nell, Jasper and Toby – giving the reader a deeper understanding and appreciation for each person’s story and how the power, ownership, fame and threat of invisibility all link together.

At the end of the book, author Elizabeth Macneal explains why she chose to write about this dark period of history through fiction. Choosing not to rewrite the history of individuals whose lives and stories were given over to the public and their own voices silenced. Rather she chose to highlight individuals who were part of this world through her fictional characters like Nell and answer the question “how would it have felt”… to be ostracised, sold as entertainment and objectified. In reading this book you get a true sense of what it would have felt like and how someone like Nell, could learn to retain a sense of self, and find meaning and a home in a place filled with “misfits” just like her. In a place that although abusive, has allowed her to realise her potential and take up space in the world.

The story line is unlike any book I’ve read and she held my attention from start through to satisfying end. A remarkable book and a favourite of the year.

It isn’t the show that counts, but the tale you spin.

The Frequency of Us by Keith Stuart 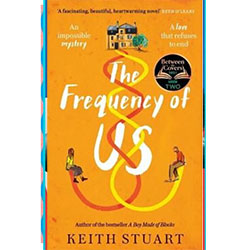 Will is an isolated 87 year old man, who has been locked up in misery since he woke from the wreckage of second world war bombings to discover his wife was missing. For over six decades he has been told that Elsa Klein didn’t exist and he was never married. When Laura, a home carer battling her own demons is sent to assess what everyone assumes is dementia, she quickly takes Will’s side and is determined to solve the mystery.

This book is an epic love story with the added spice of science fiction thrown in. It is incredibly well written, a joy to read and you’ll struggle to put it down. I loved everything about it, from the writing, to the storyline, to the characters, to the ending.

It’s the kind of novel that is easy reading and easy to get lost in but filled with so much depth. It makes you think deeply about life and love and the lasting impact your actions have on others.

A line that Stuck with me

We’re told that love is everywhere, that there’s someone out there for all of us. But this is what I’ve learned in my eighty-seven years. It’s not true. Most people never have love – what they experience is desire and then routine. Real love, lasting love – it is rare. There isn’t enough to go around.