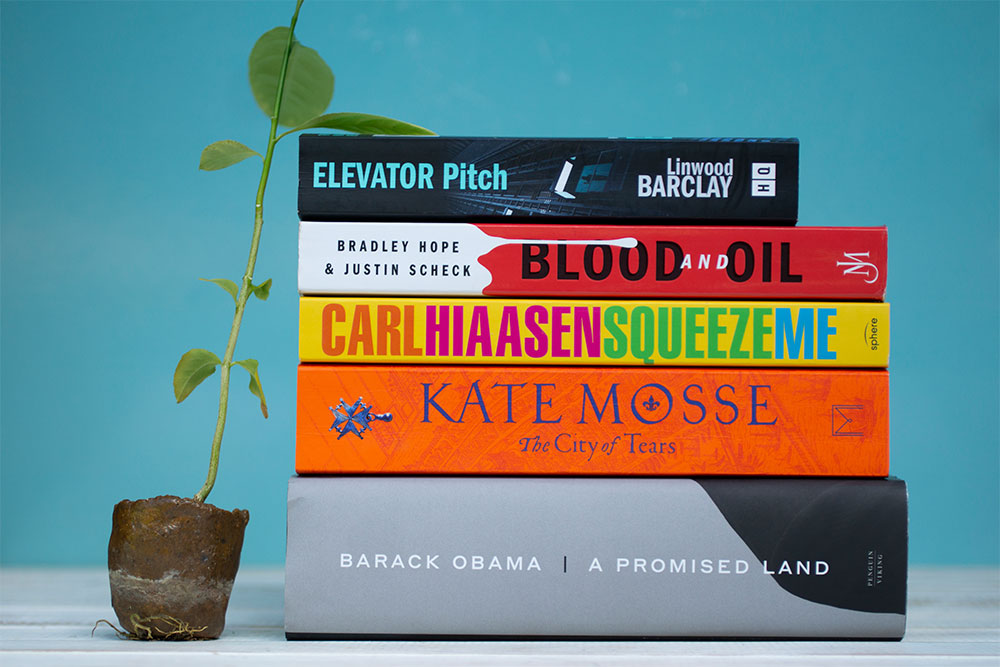 Take Control of Your Happiness with The Happiness Workout 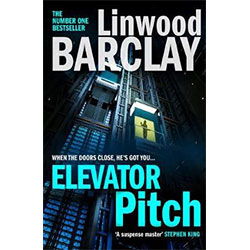 This thriller starts off on a Monday in New York City. Four people enter an elevator of a high rise and press the number to their floor. Instead of stopping at each floor, the elevator rises to the top and then drops to the bottom. What first appears to be a freak tragedy turns into a pattern when Tuesday and Wednesday bring their own catastrophic elevator accidents. New York becomes chaos and detective duo Borque and Delgado are on a race against time to solve the case before the killer/s strike bigger.

I am not a huge thriller person, but I really enjoyed this book. It was just the right amount of thrilling without being nightmare inducing gory. The storyline was multifaceted with quite a few sub-stories going on, but not in a way that made the book confusing – every element tied together in the end very well.

I found all the characters to be enjoyable to read and get to “know”, no one irritated me to the point that it affected my feelings about the book which is a great skill when dealing with a handful of villains. It was also highly gripping all the way through. Even when I thought I had the plot figured out at the halfway mark, I was still captivated and eager to find out how it ends (without skipping to the end). Spoiler alert, I didn’t have it figured out and that was highly satisfying.

Although I wouldn’t classify this as a brilliant best-of book – it is a great escapism weekend read, that even managed to throw in some life lessons.

Actions have consequences. Maybe not overnight. Maybe not in a week, or a month, or even a decade. But the things we do, the decisions we make, the way we treat other people, it all becomes part of the equation. Eventually, things have a way of balancing out.

Blood and oil by Bradley Hope and Justin Scheck 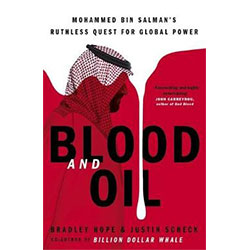 Crown Prince Mohammed bin Salman, aka MBS, is one of the world’s most decisive and dangerous new leaders. Since his father became king in 2015, he has shot himself to power, imposed rapid transformation on a country which hasn’t experienced major changes in decades, and is at the centre of allegations of an excessive and brutal regime. No one has a clue what’s driving his decisions. Based on years of their reporting for the Wall Street journal, Blood and Oil by Bradley Hope and Justin Scheck, gives an account of his rise to power, the battles he fought to get there, and provides a new understanding of the personality, family and motivations behind one of the world’s most ambitious young leaders.

Hope and Scheck have brought together their years of reporting and extensive investigations re MBS into a fascinating and truly informative read. Blood and Oil will put anything you’ve heard and or will hear about Saudi Arabia / MBS into context. If you want a better understanding of the man behind the current Saudi regime, the Saudi regime and Saudi-West relations, this book is highly recommended 😉

The City of Tears by Kate Mosse 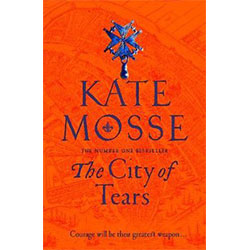 Set in June 1572, it’s ten years into the violent Wars of Religion across France and the potential of peace is on the horizon. A royal wedding has been negotiated between Catherine de’ Medici and Jeanne d’Albret to create an alliance between the Catholic Crown and Henri, the Huguenot king of Navarre.

The book starts with a note on the historic context and an introduction to the characters. This gives great context to the story but made me feel like I was doing prep for an exam on it afterwards. I only fully appreciated it when I reread it after I finished the book. I think this has a lot to do with how much information it contains that is brand new – when information like this is told in a story, it comes to you gradually, helping you soak it in slowly and page by page you get to know the characters and places.

The story then starts off with a prologue set in 1862, after which it jumps back down to 1572. At first, I found the contents hard to get into and my initial thoughts were that I would struggle to enjoy the book. Luckily, I continued on because by page 50 I was fully invested and so engrossed that I did not want to put the book down.

Kate Mosse has created an amazingly vibrant and rich backdrop to a dazzling story that encapsulates everything that makes a good book great: solid research, excellent writing, multi-faceted characters, suspense, drama, and unpredictability.

The historic inspiration, language and mannerisms came through as authentic and I really loved the whole storyline. I think this is a book I could read again, would highly recommend it and it is most definitely going onto out best books of 2021 list.

It is her second book in a series called The Burning Chambers – I did not read the first but not having that backstory did not take away from this book. I am however very keen to read the third.

Ps. On the prologue: I had to read it again once I got to the end and once I did, everything fell into place.

A Promised Land by Barack Obama 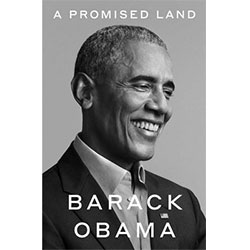 A promised Land is the first of two volumes of Barack Obama’s memoir. This first volume covers his childhood, early political career and his first term as the President of the United States. He provides candid accounts of becoming a politician, his campaign to both win the Democratic vote and the POTUS vote, assembling his cabinet and key events during his first term including the financial crisis, the BP oil spill, the war on terrorism, securing the Affordable Health Care Act and Operation Neptune’s Spear, which led to the death of Osama bin Laden. Weaved into this political memoir is his tight knit family and the challenges they faced as they became public figures.

In the introduction, Obama writes that in writing his memoirs he hopes to give an honest rendering of his time in office -one that not only explains key events but also provides details of the political, economic and cultural crosscurrents that impacted choices made. That he wants to offer the reader a sense of what it’s like to be the president of the United States and pull back the curtain. After finishing this book, I’d say that he does just that.

It’s a verbose book – he does admit to a habit of going into detail and a dislike of endnotes and footnotes – but it’s one that doesn’t leave you feeling bored. He’s a great storyteller and this book is filled with personal anecdotes and glimpses into who he is and his relationships with his family and friends.

I’ve always enjoyed memoirs, especially those with a historical significance and although I’ve never been into politics, I found his insight and behind the scenes fascinating. My favourite parts of the book, unsurprisingly, were not the details of the politics and policies, but rather the parts that peeled back that curtain of life of the POTUS and his background. Things like how the secret service works, details of Airforce One, his grandparents, mother, Michelle, children and the random factoid that the first family pays out of pocket for their own groceries and furniture upgrades.

One of the most interesting events described was Operation Neptune Spear; and I found the background and behind the scenes he shared to be fascinating. The one thing I found surprising was how little Joe Biden, his Vice President featured. He spoke at length of many of his aides and cabinet members, with Biden appearing infrequently and with little more than a sentence at a time. I wonder if this is because A Promised Land was published November 17, two weeks after the US election, and his omission was politically motivated.

Overall, it was a fascinating, well written memoir and I’ll happily read the second volume, even if it is also over 700 pages.

The truth is, I’ve never been a big believer in destiny. I worry that it encourages resignation in the down-and-out and complacency in the powerful. I suspect that God’s plan, whatever it is, works on a scale too large to admit our moral tribulations; that in a single lifetime, accidents and happenstance determine more than we care to admit; and that the best we can do is to try to align ourselves with what we feel is right and construct some meaning out of our confusion, and with grace and nerve play at each moment the hand that we’re dealt.

Squeeze Me by Carl Hiaasen 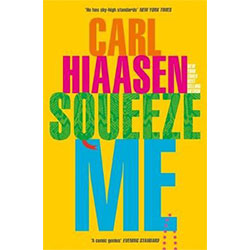 It’s charity ball season in Palm Peach Florida when Kiki Pew, a prominent high-society wealthy widow goes missing at a gala. She is later found dead. As the founding member of the Potussies, a group of similar women who are dedicated to supporting the POTUS, the circumstances of her disappearance and death travel up the food chain resulting in the president announcing in a press conference that she was the victim of a violent illegal immigrant gang.

This is far from the truth, and wildlife wrangler Angie Armstrong makes it her mission to uncover the truth, which she happened to stumble upon when called on to deal with an influx of humongous pythons on the island.

This is a satirical/slapstick crime novel that was completely lost on me. I found the humour to be ha ha rather than actual funny. Despite some enjoyable characters that Hiaasen created, I did not enjoy the storyline. It dragged on and I found the plot pointless and weak. It also grated me how the president was clearly modelled on Trump’s antics while in office, using him as ‘inspiration’ for a character came across as tired. Books are personal so if you’re a fan of satirical comedy you might truly enjoy this.

I hate to say it, but the best thing about this book is its gorgeously vibrant cover. From the day it joined our to be read pile I’ve been eager to pick it up. By now I should know not to judge a book by its cover.

Take Control of Your Happiness with The Happiness Workout

On Our Bedside Table: Historical stories from Africa and Beyond