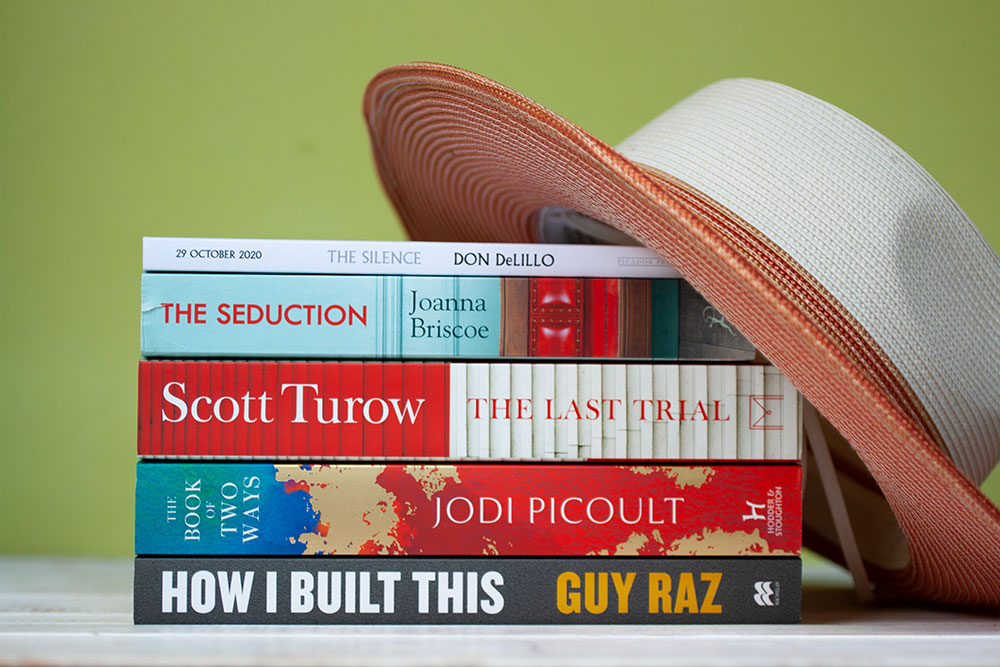 Our Book Recommendations January 2021 are here.

How I Built This by Guy Raz 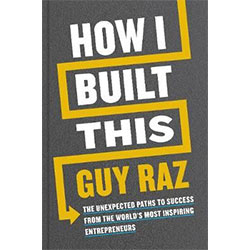 Guy Raz is the host of the highly acclaimed NPR podcast, How I Built This, in which he interviews entrepreneurs and innovators and shares their stories of success. This book is based on the podcast; and using the stories of those he has interviewed, he offers priceless insights and inspiration on how to start, launch and build a successful venture. The book is split into three parts – the call, the tests and the destination. It follows, he explains the path traced with each entrepreneur. Each part is filled with chapters, each chapter another business lesson that is taught through real life stories. The goal of the book, Raz says, is to peel back the curtain on entrepreneurship and shed light on entrepreneurial success and thus provide an architecture for how to think creatively about building something.

I’ve been listening to How I Built This for years and it is one of my favourite podcasts and that is largely due to Guy Raz who is a phenomenal interviewer. Yes, the guests and their stories are a big part of the show’s success, but I’ve listened to other podcasts which the exact same guests and realised that a good interview is only as good as the interviewer. Guy Raz has a knack for extracting details and stories most would leave uncovered, for asking questions that show how much research he’s done, for making interviewees comfortable enough to be open up and for sharing enough of himself to make him feel personable but never detracting from the person who he’s interviewing. If he writes as well as he interviews, I thought when I first picked up the book, it’ll be brilliant. It turns out he does; he knows how to tell stories and I loved that at one point in the book he referred to himself as a storyteller rather than a journalist.

How I Built This is one of the best business books I’ve read. It’s clearly laid out in a sensical order that makes learning from it easy, interesting and enjoyable. What makes it great is the stories. Learning through stories has always been more powerful to me than learning through dry theory. It’s not about one business, one person, but many. He doesn’t try sell you on entrepreneurship or promise a ‘do this and you’ll get there’ narrative that a lot do. He teaches by storytelling – offering the good, the bad and acknowledges that everyone is different, a successful idea isn’t always one that reinvents the wheel and that luck is a factor not to be discounted. A tie back to the final question he always asks in his interviews, “how much of your success is due to luck and how much due to hard work?” A question that elicits some of the best responses.  Although I had heard many of the interviews he shares inside, he gives more detail and combines stories in a way that is brand new and not just a repetition of the podcast. Aside from the business lessons, I enjoyed the parts he peeled back the curtain and shared more about himself, how he started the podcast and the work that goes into each episode.

Whether or not you want to start a business, How I Built This is a fascinating and enjoyable read packed with lessons and wisdom.

Failing is scary. Wasting your life is dangerous.

The Book of Two Ways by Jodi Picoult 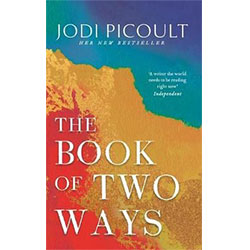 Dawn is a death doula, that is she spends her days helping people who know they are dying soon to make that transition peacefully. With a career she enjoys, a husband and daughter, her life is secure, but when the plane she’s on plummets what flashes through her mind is not the perfect life she has; but rather a life she was forced to abandon 15 years ago. In her early twenties Dawn was living her dream building her career in Egyptology when she was forced to abandon her career and the man she loved.

When she survives the plane crash, against all odds, Dawn is given a ticket to take her anywhere she needs to go. Where that is she doesn’t know. She seemingly has two very different destinations, each that would lead her on very different paths. As her life forks in two very different directions, Dawn must confront questions she’s never truly asked herself; What does a well-lived life look like? What do we leave behind when we go? And do we make our choices or do our choices make us?

I adored this book to such an extent that after gobbling about three quarters of it in a day, I dragged the final chapters out over the course of 3 days. I desperately wanted to know what happened, but I also didn’t want the book to end. It is enthralling, gripping and evocative. The book, at least in the beginning, reminded me of Heads You Win by Jeffrey Archer, a book I loved, and thought was brilliant. Not because of the storyline or characters but rather the way it was written – two different versions of the same person living parallel lives. It’s a mind-bending way to write that adds to the excitement and in this case leaned into quantum mechanics and her physicist husband who speaks of a multiverse in which each time we make a decision we create a new timeline.

Death is another big topic, and she writes about it in one of the most beautiful ways I’ve read – a mix of empathy and bluntness that captures so many of the emotions of death, especially the fear of dying and experiencing the death of a loved one.

Her level of research is evident in the detail and the way she brings Egypt and Egyptology alive. Rather than being an extra, it becomes an important part of the story. It turns out she went there and learnt from an Egyptologist.

I’m not sure what genre to put this novel in – it’s a love story, an adventure, a story of finding yourself, relationships, of life and death. It is a thought provoking read you won’t want to put down but won’t want to end; but when you do finish it, don’t be surprised if you want to start from page one all over again.

When you lose someone you love, there is a tear in the fabric of the universe. It’s the scar you feel for, the flaw you can’t stop seeing. It’s the tender place that won’t bear weight. It’s the void.

The Seduction by Joana Briscoe 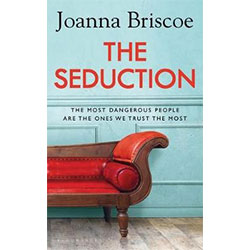 Beth, an acclaimed artist, starts therapy at the insistence of her husband to deal with her unresolved feelings of being abandoned by her mother at 13 and the anxieties of raising a teenager. At first she is resistant to the idea but the deeper in she gets, the more reliant she becomes on it, even when it turns out that the person who’s meant to be helping her is the most dangerous problem of all.

In all honesty, I did not care for this book and struggled to finish it. The faults, in my view came down to both the story line and characters. I found the characters hard to relate to or emphasize with. They were not captivating and their character traits grilled me. The storyline felt dragged on and pointless and void of any meaning. There were no real surprises and the ending left me with a feeling of “ok, so what was the point.”

The Last Trial by Scott Turow 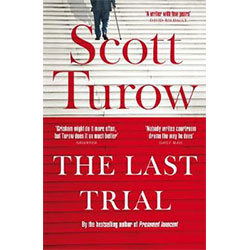 At 85-years old and in precarious health, legendary defence attorney Sandy Stern agrees to take on the case of his friend Dr Kiril Pafko. Dr Pafko, a Nobel Prize winner in medicine and CEO of PT (Pafko Therepeutics) has developed a cancer treatment which despite its successes has resulted in a federal charge of fraud, insider trading and murder. He doesn’t know if his friend is guilty or innocent but is determined to both win his last case and uncover the truth.

This is a courtroom drama that takes a while to get into. The style of writing is a bit dry – it has the feel of reading a stenographer’s notes of a trial. Turow has been practicing law for fourty years so it made sense to me, that this would be how it would read. However, despite this, the deeper you get into it, the better it gets.

I found it very interesting how Scott Turrow builds characters. He reveals only little bits at a time given the reader the opportunity to make and review judgements as the case goes on. And seeing as I just criticised all the characters in the book review preceding this, I feel it extra important to note how enjoyable each character was. Be it the good, the bad, the quirky, the extra side roles, it was enjoyable getting to learn about each. I

At the end of the book Turrow says that the regulations that governs the clinical testing and approval of new medications is complex and defies easy understanding. In the aims of giving readers a pleasurable fiction instead of a drudgery fact book, his goal was to avoid outright mistakes and misrepresentations, but he wanted readers to know what he represented was a simplification. This, I think, he does very well. I found his explanations of both the case subject, i.e. Trialling new medications and  how a trial comes together and is run was both interesting and educational.

If law is your thing and you love law TV shows, you’ll likely enjoy this.

The Silence by Don DeLillo 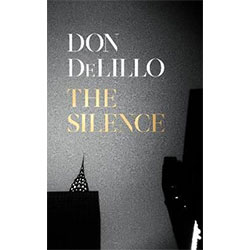 The Silence takes place on Superbowl Sunday in the year 2022. Five people are due to have dinner in an apartment on the East side of Manhattan. The hosts are a retired physics professor and her husband. The guests, a former student and a couple due to arrive back from Paris.

The flight back from Paris has a dramatic ending, leading the couple to be late. However, back at the apartment, just before opening kick-off something happens and the screen goes black. All digital connections are severed and the city goes black. The Silence follows the conversations and events that follow.

It’s a short novel of 116 pages and the size of an A5 notebook. I mention its size because had it been longer I don’t know if I would have finished it. I was hoping it would get better or at the very least make sense to me. I felt the storyline fell flat, in fact I’m still unsure what it truly was. I didn’t like how the characters seemed to talk at each other and not to each other. There was no conversation or connection, just words. To me their disjointed sentences came across the way someone trying to sound profound strings a bunch of big words together or a random fact they’ve read. Sentences that when you listen to them, makes no sense. Suffice to say that despite the acclaim he’s received as a writer this book did not resonate with me.