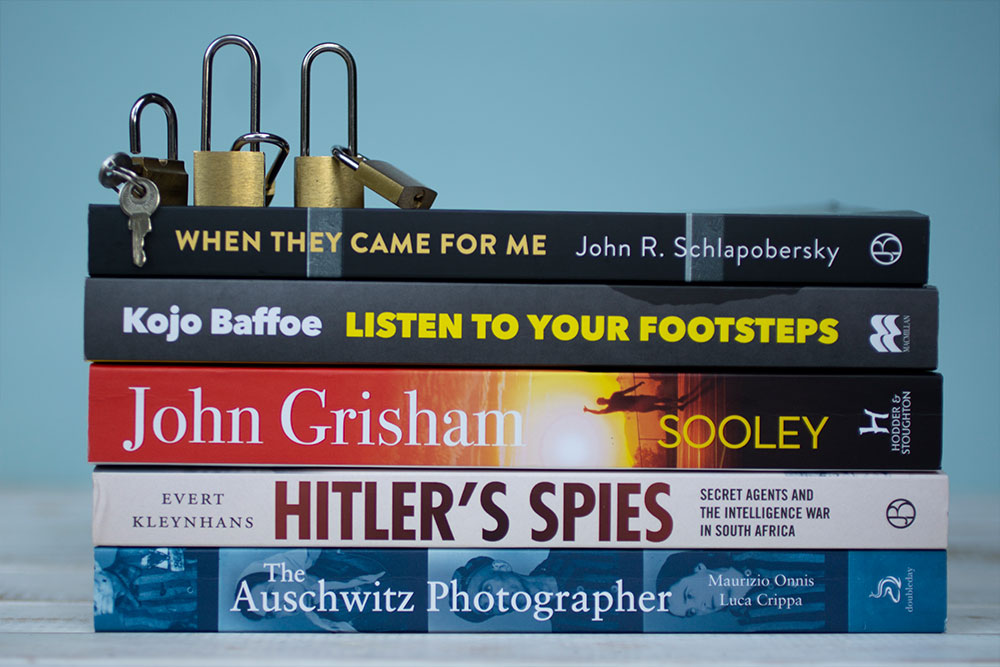 Our Book Recommendations July 2021 are here

The Auschwitz Photographer by Maurizio Onnis and Luca Crippa 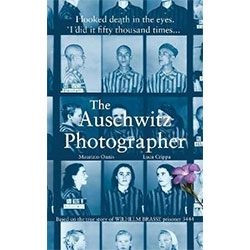 Wilhelm Brass was born to an Austrian father and Polish mother. He grew up in Poland and learnt the art of photography by his uncle, who owned a photograph studio in Katowice, Poland. In 1939 Germany invaded Poland and Brass was asked to swear his allegiance to Hitler and join the Wehrmacht. He refused and tried to escape to Hungary, looking to join the Free Polish Army in France. He was captured at the border in 1940 and deported to Auschwitz as political prisoner number 3444.

His skill as a photographer got him placed in the camp identification service where he was ordered by the SS to take identification photographs of prisoners when they entered the camp, capture the horrifying criminal experiments of Joseph Mengel and record executions. He took around 50 000 photographs for the SS from1940-1945.

Pained by what he was forced to witness, Brass joined the camp’s resistance movement and helped fake documents for prisoners and smuggle images to the outside world. When the Soviet troops advanced on Auschwitz to liberate it, he was ordered by the SS head of the camp identification service to destroy his photographs. An order he refused because ‘the world must know’.

His life and time spent in Auschwitz is recreated from archives and interviews in this book to share his extraordinary story and acts of resistance.

The Photographer of Auschwitz is superbly researched and put together to create an important historical account of The Second World War. Written after Brass’s passing, the authors went through recorded interviews with Brass, interviewed his children and obtained the photographs he took and learnt their history at Yad Vashem which holds archives of the experiments. I have a huge appreciation for historians and researchers who are able to share historical stories like they have done here so well.

Wilhelm Brass’s story is an important story. Not only is it a side of life in Auschwitz that hasn’t been told, it’s a story that’s not just about one inmate, but rather the story of the thousands of prisoners photographed and recorded before being sent to their deaths. Brass was determined that the pictures should not be destroyed, because he believed in the power of an image and that the individuals in those images deserved to be remembered. He risked his life when he refused to join the SS despite, as they liked to remind him, being Aryan. He risked his life again to save as many images as he could and is the very reason so many images exist to this day to bear witness to the horrors of the Holocaust.

In a world where Holocaust denial is on the increase and people revise history as it fits their narratives, those images and what they undeniably reveal are even more important. Wilhem brass’s story is an important one and because of what he was forced to do while imprisoned and what he risked his life to save centre to the history of the Holocaust.

Listen to Your Footsteps by Kojo Baffoe 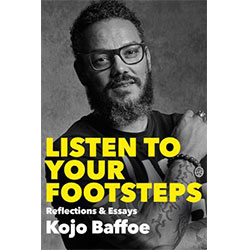 Kojo Baffoe was born to a Ghanian father and German mother, whom he lost as a toddler. He was raised in Lesotho by his father and now lives in South Africa. He’s worked in the family business, started his own businesses, been the editor of a popular magazine, dabbled in poetry and more. Listen to Your Footsteps is his first fifth book, which he explains as being the fifth idea he’s had for a book put into the first book he’s written. It’s a collection of reflections and essays on losing his mother as a small child, his close relationship with his father, identity, being an immigrant, fatherhood, career, marriage, growing up and living.

I loved this book and how much it drew me in, honestly surprised me. Kojo Baffoe has a magical way with words, which may be down to his past as a poet or simply being a good writer and storyteller. That magic is both subtle, like the beautiful way he refers to those who have passed away as transitioned, which evokes this peaceful image of moving from one type of existence to another. And also more direct, like the story he tells of how listening to his footsteps, something he learnt as a sprinter, has helped him navigate life and be mindful and present in the now.

There’s a phrase I heard once that went something along the lines of ‘our similarities are our differences’ and I felt that here. There’s little if anything Baffoe and I have in common and yet there was so much in his book that resonated with me and that comes down to his ability not to just share stories, but to articulate ideas. I kept on thinking while reading it that the book feels like a cathartic experience. I don’t know if for Baffoe writing it was cathartic, or if it’s his insights and reflections that take on that quality. Either way it’s a fantastic, thoughtful and enjoyable read.

We all have multiple talents and abilities that we are born with. Living is about deciding which ones to pursue, doing them wholeheartedly and being accepting of the consequences, positive or negative. 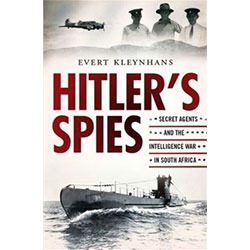 Dr Evert Kleynhans is a senior lecturer in the Department of Military History at the Faculty of Military Science of Stellenbosch University. In this book, he presents five years of research into the intelligence war in South Africa during the Second World War.

He explores what really happened from 1939 when the German government reached out to the Ossewabrandwag (the political opposition and anti-war movement in South Africa at the time), the Nazi’s aim of spreading sedition in South Africa, and the network of German spies established in the country and surrounds.

“Hitler’s spies presents a unrivalled account of the German networks that operated in wartime South Africa.”

As a lecturer who clearly set out to learn more about and uncover this period in history, this book is very research paper heavy, however Dr Evert Kleynhans manages to relay the research through storytelling, as opposed to a dry timeline. It is incredibly well researched and written. That being said, I do caution that to pick it up and enjoy it, you should be interested in South African military history.

An unexpected “outcome” for me that didn’t make a huge impression while reading but has in the past few days of political/legal news in the country, was the exploration of why no arrests were made when there was evidence collated and substantial cases against these spies. He writes of members of the government at the time, “they were wary of any move that could turn Van Rensburg and his co-accused into martyrs, and, worse, ensure that Ossewabrandwag supporters voted for Malan’s National Party en masse.” When I read the news that Jacob Zuma turned himself into police custody, that immediately came to mind as to his motivation.

This is the beauty of reading a broad range of books. Allowing your mind to explore different topics and learn new things expands your perspective and allows you to develop new thought patterns.

When They Came For Me by John R. Schlapobersky 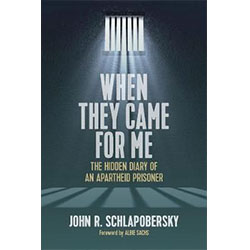 In 1969, John Schlapobersky at 21 years old was arrested for opposing Apartheid. He was arrested during a lecture at Wits University where he was a student and taken to the Campol prison in Pretoria, known as the hanging jail and which is now a museum and memorial. He was tortured for 5 days during a non-stop interrogation where the police tried and failed to get any information out of him. He was then detained in solitary confinement where he kept a prison diary on pieces of toilet paper and pages of a bible using a stolen pen. With the help of the Israeli embassy, he was released and deported to Israel.

In When They Came For Me, John, for the first time, shares his story of imprisonment and how that experience shaped his work as a psychotherapist working with people who have similar histories.

When They Came For Me is written like a diary. He systematically goes through each day of imprisonment and unpacks each event. It’s clear by the end of the book how important it was for him to go through the process of writing about his imprisonment as part of a healing process and as an act of defiance against his torturers. At the end of the book he shares stories from Freedom From Torture, a non-profit he helped established that provides therapy to those who have suffered some of the most horrific torture. He speaks of the importance of testimony – of talking, of bearing witness. This is an important part of healing and it’s clear that he has used his own experience to help others.

This book also highlighted the importance of reading not only history books on periods of history but also reading the stories of people who lived through that history. It makes that history more tangible and gives one a better idea of what that time was like. In a way, it provides color to historical events that are often presented as black and white facts and dates.

Lastly, a little brightness from a dark book is the nostalgia I felt from reading the beginning of the book. Schlapobersky shares his background and childhood; and his memories of his Yiddish speaking grandparents, and Jewish upbringing. I spent my early childhood in the same street his grandmother lived in and was his home for years, reading these memories made me smile.

Human beings, people, we, each other, are the only things to cherish or set any store by. The only valuable things are relationships. 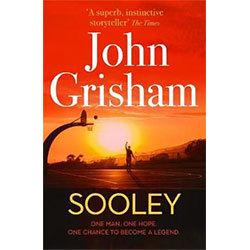 Basketball loving Samuel Sooleyman is 17 years old and lives in a village in South Sudan. Noticed by a coach taking a youth team to play in the United States, he gets the chance of a lifetime to change his life.

Selected, he sets off to America, but when devastating news reaches Samuel from home, it sets into motion a future he could never have dreamed of. He must balance being in a foreign new world, his heartache and homesickness, with his dream and dedication to becoming a basketball legend.

This is such an easy reading novel with a lovely, yet heart-breaking storyline. I enjoyed it all the way through, the story impacted me, and the ending was something I didn’t see coming.