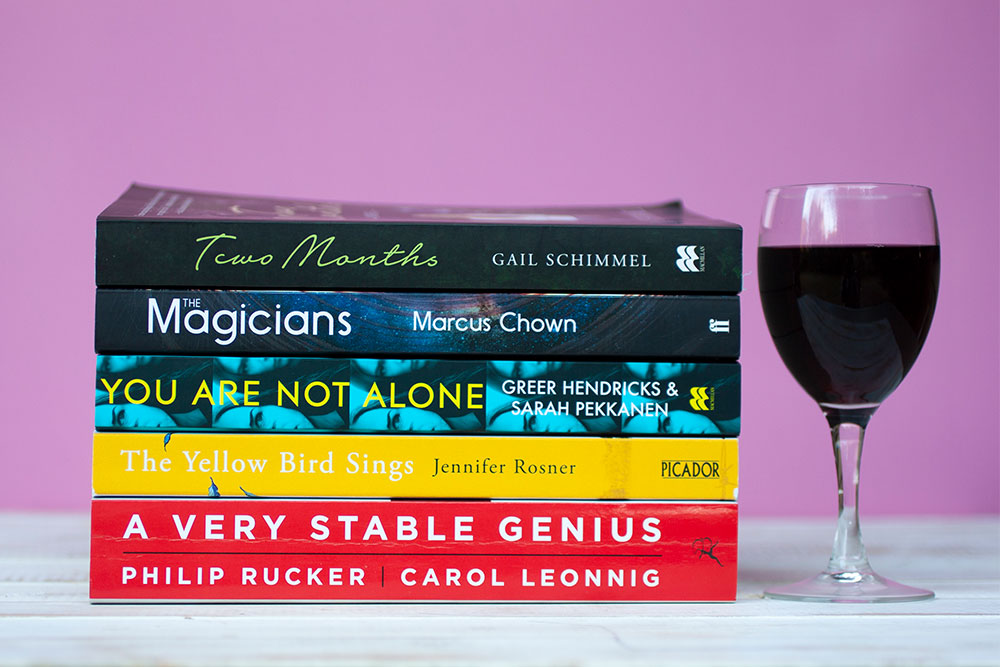 Our Book Recommendations June 2020 are here.

The Magicians by Marcus Chown 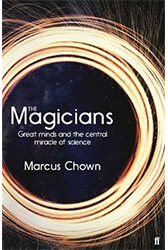 The Magicians is about the scientists who used mathematics to predict the existence of unknown phenomena in our world; Black holes, planets, invisible force fields, ripples in space-time, unsuspected subatomic particles and antimatter.

Marcus Chown takes you on a tour of the breakthroughs of modern physics and highlights science’s central mystery: Its astonishing predictive power.

This is a highly intellectual book that ideally requires a base knowledge of physics if you don’t want most of it to fly over your head. The last time I took any physic related subjects was roughly 15 years ago and I can’t say anything stuck with me. That being said, even though I didn’t understand a bulk of it, I still enjoyed reading it.

What I particularly enjoyed was how Marcus Chown created a story about each discovery he wrote about. He said,

“The stories I tell here of Maxwell, Dirac and many others who demonstrated the central magic of science are as factual as I can make them. If the scientists are alive and it was possible to interview them, I did so; for those that are dead, I used the facts at my disposal and dramatised the events around them… My hope is that, by dramatising such stories of prediction and discovery, I will not only bring the events alive but also provide some idea of what the moment of discovery must be like and how exhilarating it must be to realise a profound truth about the world that no one has known before.”

By creating stories, he made a difficult-to-the-layman subject very readable.

The idea that left the greatest impression on me and doesn’t need a physics degree to grasp was:

One of the cornerstones of physics is that energy can neither be created or destroyed, but only transformed from one form into another.

This made me think a lot about life and death and how when someone physically leaves this world, it doesn’t mean that they disappear.

I also managed to pick up a lesson that summarises the elements that make up the discoveries in this book;

In conclusion, to sum up how I felt about this book, I’m stealing a quote of Italian physicist Enrico Fermi that Chown shared.

“Before I came here I was confused about this subject. Having listened to your lecture [swop this out for read your book] I am still confused. But on a higher level.”

A Very Stable Genius by Philip Rucker and Carol Leonnig 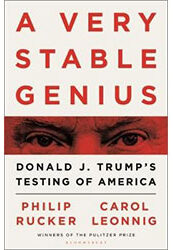 During the course of their reporting for the Washington Post, journalists Philip Rucker and Carol Leonnig have individually covered President Trump and his administration. In A Very Stable Genius, Leonnig and Rucker have gathered hundreds of hours of interviews from more than two hundred sources, including some of the most senior members of the administration, to go beyond their daily news reports. Based on these first-hand accounts, they reconstruct events as they happened to provide the reader with a behind-the-scenes account of Trump’s presidency.

Given the endless stream of headlines, detailing what has seemed to the by-now unsurprised reader another nonsensical Trump decision or tweet, I delved into this book eagerly. Throughout the 417 pages, the authors have skilfully translated their immense score of information into a fluid account of almost three years of Trump’s presidency. With every event recounted, a picture of Trump is created; of an egocentric, uncouth, fish-out-of-water who has no idea what he is doing and is too proud to utilize the expertise surrounding him. However, at a certain point (about 100 pages in, to be exact), it seemed that every subsequent scene I read was only reinforcing this picture and was no longer enhancing the perspective that I had thus far gained. It felt as if I was reading the same thing in a different context for 300 pages and I struggled to finish the book. However, I acknowledge that this was just my experience and the authors do achieve their goal with this book; their behind the scenes account did give me an understanding of everything I have ever read about Trump and a perspective for anything I might read in the future. On a side note, the impression of Trump that this book portrays made me wonder how he got elected if that is what so many people think about him. It would be interesting to speak to the people who voted him in and still support him to get an idea of their mindset…Just putting ideas out there….if anyone is looking to write a book 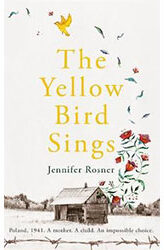 The Yellow Bird Sings is a novel set in Poland 1941, during World War Two. It follows the story of Roza and her 5 year old daughter, Shira who have managed to escape being round up and sent to the death camps along with the rest of the Jews in their town. They find “refuge” hidden in a farmer’s barn where to survive they need to remain silent, becoming invisible.

Shira, bides the time listening to stories her mother tells her of a yellow bird and composing melodies in her head; trying to understand why she cannot talk and play like the children she hears outside.

Roza does all she can to look after Shira and shield her from the horrors of the outside world. They play games, try to learn and learn to communicate through their own sign language and through a story about a little yellow bird. As the days and weeks go by, their little haven is no longer safe. The encroaching Nazis force Roza to make an impossible choice: Keep her daughter with her or let her go and give her the chance to survive.

The Yellow Bird Sings is a deeply moving and gripping novel. I read it cover to cover, not wanting to put it down; and when I reached the last sentence on the last page, I wanted it to continue. Music is a central theme to the story, it weaves it’s way in and out in a way that turns this novel into a piece of music that has highs and lows and that is both beautifully hopeful and tragic.

Perhaps what makes this book so stunning, is the authors background and inspiration for writing it. At the end she shares how she got her inspiration during a book event for her memoir, If a Tree Falls. It’s about raising her deaf daughters in a hearing and speaking world. At that event, a woman shared how during World War II, she was hidden with her mother in an attic and had to stay silent most of the time. She was struck with that experience of a mother trying to hush a child to keep her alive; an experience opposite to hers – as her own experience of motherhood was trying to get her child to be heard as much as possible. She ended up speaking to that woman and other survivors who too had been hidden during the world, some apart from their families. Families they would never see or remember again. That was the inspiration for a Yellow Bird Sings. The musical nature of the book was inspired by her upbringing listening to her Father play the violin daily; amplified by a visit to an Israeli luthier tasked with fixing a violin salvaged from a Nazi death camp, ashes still inside it.

That personal element, the research that went into creating this book and its characters are what make this novel more than just a well written story. In the authors words – it’s a story about longing, to be connected, to be heard, to find a way home; and one that is filled with imagination and feeling. 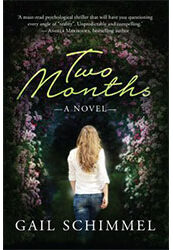 Two Months is a novel revolving around Erica, a thirty something woman who wakes up one morning to discover she can’t remember the last two months of her life. Last she remembered she had a job she loved, a close-knit group of friends and a happy marriage. But in the two months she lost, she also lost that job and friends.  To make it worse, her husband won’t tell her why or what really happened, leaving Erica to try piece together her shattered memory.

The book flits between the present and past; adding little puzzle pieces with each chapter. At times I felt the plot was obvious, feeling I knew what would happen, but not how. Yet, even with some predictability, it still managed to give little twists throughout and an ending I didn’t fully foresee; giving the book an element of surprise that makes a thriller really good. It’s the type of book that just flows and is easy to read, a story you can lose yourself in and spend an entire afternoon gobbling it from start to finish. Or at least I did, and it was a wonderfully thrilling escape!

You Are Not Alone by Greer Hendricks 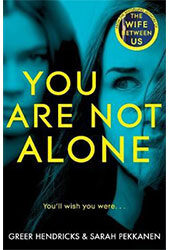 Shay Miller is an ordinary thirty-one-year-old woman trying to figure out her life, trying to find love, a job, some form of belonging. The Moore sisters in contrast seem to have it all figured out – a successful business, a close-knit circle of friends, looks and the ability to get whatever they want. A random turn of events leads Shay to the Moore sisters, and she becomes entranced, desperate to get a taste of their lives, to become one of them. They seem to embrace her, but their motives aren’t pure and Shay is soon caught up in a world that only looks perfect on the outside.

This is an addictive gripping thriller with enough twists to keep you captivated throughout. Each Chapter revolves around a different character, each with their own stories and trauma, and flits between past and present, giving you little bits and pieces that slowly start forming a full picture, but just when you think the picture is clear, another bit is revealed blurring it again. It’s a fantastic psychological thriller that kept me up late one night, turning the pages desperate to know the ending. An ending that did not disappoint.