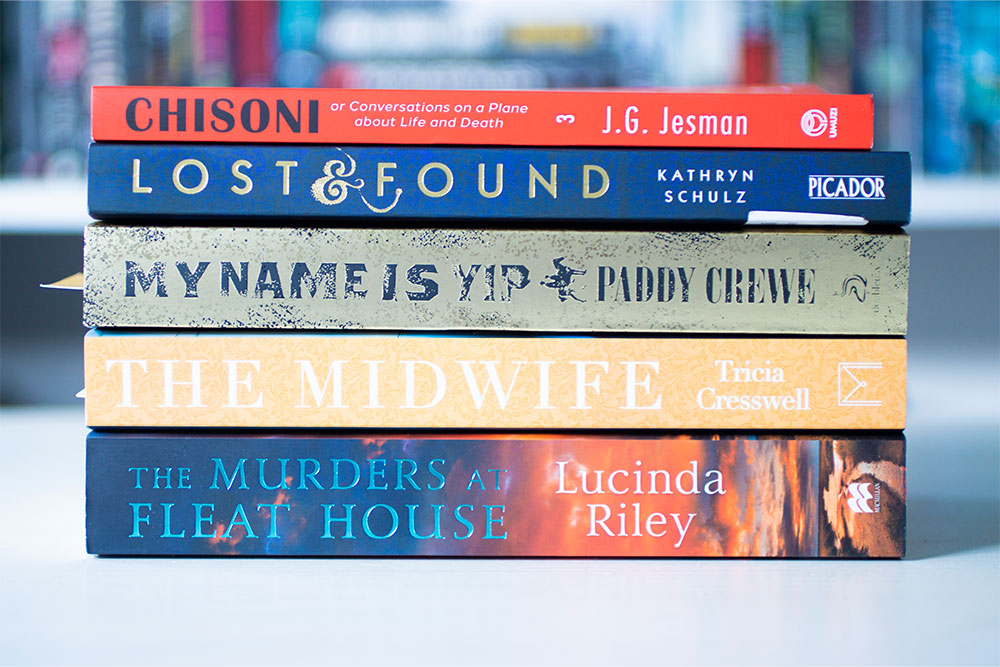 Our Book Recommendations June 2022 are here

This novel that follows Chisoni, a 33-year-old Malawian who embarks on a long-haul flight to England following his brother’s funeral. On the flight he finds himself next to a talkative Irishman who engages him in numerous conversations on life and death. The book flits between the flight and Chisoni’s visit back to Malawi to bury his brother.

I remember thinking this book had so much potential – that the idea of having conversations on a plane with a stranger about life and death can yield deep and wonderful insights. Unfortunately, I felt that it fell flat. It was hard to get stuck into the book and found myself counting down until the end, rather than savoring the journey of getting there. The conversations between the Irishman and Chisoni were lacking the thought provoking depth I anticipated, and I was unable to enjoy the storyline.

My Name is Yip by Paddy Crewe

Published by Doubleday, an imprint of Transworld Publishers which is part of Penguin Random House

In 1815, in a small town of Georgia in the USA, Yip Tolroy is born without the ability to speak. By the time he turns fifteen, he is a friendless outcast, and no one expects much from him, including his mother. When gold is discovered nearby, he commits a crime which causes him to flee his little town and secure world with a new friend. They embark on a journey that irrevocably alters the way he sees life and himself.

This novel is brilliant from the first page. Original, heartfelt, suspenseful and well written. Narrated by an older Yip as he reflects on his life, you can’t help but fall in love with the protagonist Paddy Crewe created and have your heart break for him page after page. It’s a great story, filled with vibrant characters, but what really sets it apart is how much wisdom is woven into every bite sized chapter.

As a first novel from Paddy Crewe, I look forward to reading whatever comes next from him.

Words That stuck with Me

So often a man believes he has nothing to lose not because it is true but because he can’t yet see all there is to lose, all them things might not be present now but waiting in the yrs to come. Just because he has not found them yet does not mean he cannot lose them.

The Midwife by Tricia Cresswell

Published by Mantle an imprint of Pan Macmillan

This historical novel begins in the year 1838, after a violent storm.  A woman is found alone, naked and near death on the Northumberland Moors. She has no memory of who she is or how she landed up where she did, but she somehow knows how to help a woman in labor, how to patch up injuries and care for the sick. Using her skills and determination she starts building a life for herself, becoming a respected person in the small community until an event happens that forces her to flee…

Meanwhile in London, Dr Borthwick leads a solitary life as an accoucheur helping high society women give birth with the help of his midwife, Mrs Bates. But his life is not as spotless as it seems, and one wrong move can ruin everything…

This book hooked me fast and then refused to let go. It’s a gripping and vivid historical novel that gives you insight into the life of women in the 1800s and the real dangers of giving birth and, well, just existing. It had a wonderful jaw dropping moment about halfway through, the kind that keeps you on your toes and makes a good book a great book.  I thoroughly enjoyed it, but I will say that I found the ending somewhat anticlimactic and was hoping for something that tied up the story neater…but in the authors defense there was nothing tidy about being a woman in the 1800s.

Published by Picador, an imprint of Pan Macmillan

Lost & Found is a philosophical memoir that draws on two big events in Kathryn Schulz’s life; losing her father and finding the love of her life. Kathryn Schulz is a staff writer at the New Yorker and winner of the Pulitzer Prize.

This is a profoundly different memoir in the sense that it is almost more about life than it is about Kathryn Schulz’s life. I thoroughly enjoyed how Kathryn used the concepts of losing and finding to tell her life story. It is written beautifully, very esoteric and moving. It’s a writer’s book and a book for those who love philosophizing.

Words That stuck with Me

Then there is the issue of passwords, which are to computers what socks are to washing machines.

The Murders at Fleat House by Lucinda Riley

Published by Macmillan an imprint of Pan Macmillan

This is the only thriller Lucinda Riley wrote and she only intended it seeing the light of day after her bestselling series The Seven Sisters was completed. Her eldest son, and sometimes co-author writes in the forward that it was written in 2006 and that he has chosen to release it now, before the final book in the Seven Sisters is to be released.

The story takes place in the rural town of Norfolk, England where a student is found dead at a private boarding school. What appears at first to be just a tragic accident is revealed to be more sinister as more bodies are found and it is up to Detective Inspector Jazz to uncover the truth.

I must confess that this is the very first Lucinda Riley book I’ve read. I’ve heard good things about her books, have another one of her books on my bookshelf, and after reading this book, I don’t know why it’s taken me so long to pick one up. It’s the right amount of thrilling without being gory and has enough intrigue that you don’t want to put it down. There are little clues dropped in throughout the book that make you think you know what would happen (you don’t) which keeps you on your toes and your fingers turning the pages. It is the perfect read to curl up with over a cold weekend!