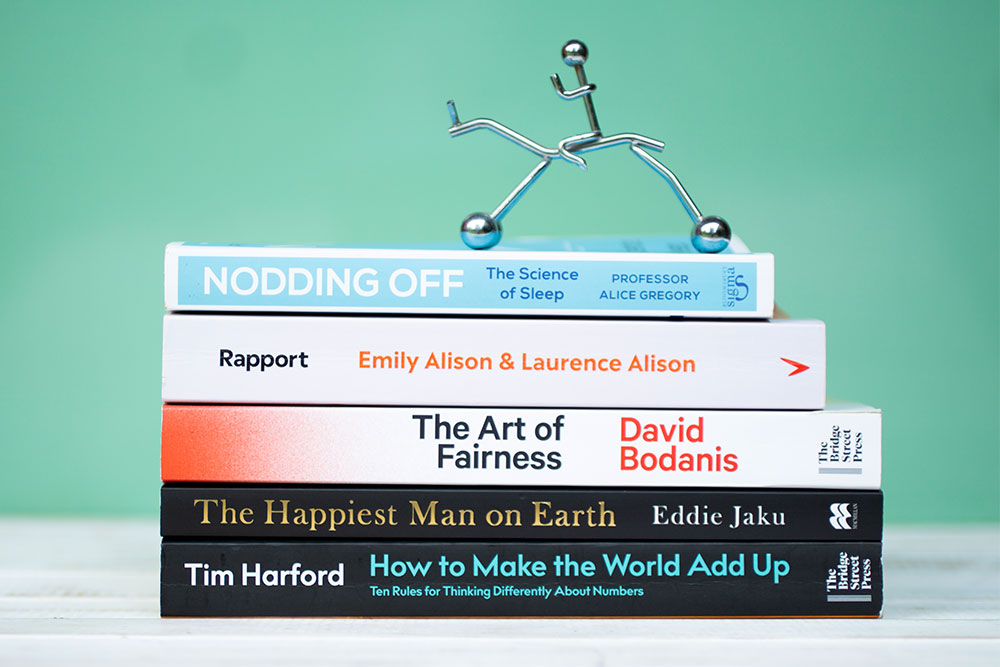 The Happiest Man on Earth by Eddie Jaku 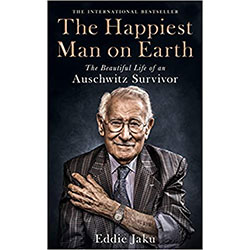 Eddie Jaku grew up in Germany and although he was a Jew and his family practised Judaism, he always considered himself first and foremost a German. That patriotism changed on 9 November 1938, the night that became known as Kritalnacht where he was beaten, witnessed Jewish homes and businesses go up in flames and vandalised and Jews mercilessly killed. He was later sent to a concentration camp. Over the next 7 years Eddie faced unimaginable horrors. First in Buchenwald and later in Auschwitz where he lost family, friends and faith in his country. After surviving, Eddie made a vow to smile and live life to the fullest every single day. At 100 years of age, Eddie is now sharing his story and spirit in his memoir aptly titled The Happiest Man on Earth.

This is one of the shortest Holocaust memoirs I have read, but also one of the most special and impactful. To publish a book at 100 is an incredible feat, inspiring and proof of the adage “you are never too old to do something”. This is a true memoir in every sense of the word and his life experience, perspective and wisdom shines through. He tells his story, matter of fact, the way you would expect a wise old man to, and it is both horrifying and hopeful. What makes this memoir and Eddie incredible is his mindset and attitude. To go through hell, lose everything and walk out alive and make the decision to be happy, to live life and choose love not hate; takes a special person and is a lesson for us all. It is a book you won’t soon forget after reading.

Hate is the beginning of a disease like cancer. It may kill your enemy, but it will destroy you in the process too. 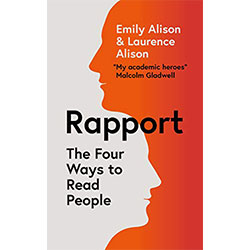 Emily and Laurence Alison are world leaders in forensic psychology. Emily has worked for over 20 years designing and delivering treatment for families suffering from violence and abuse. Laurence is the Director of Critical and Major Incident Research at the University of Liverpool and was the key psychological debriefer for over 400 incidents including the London 7/7 bombings and the Buncefield Fire. Together, the Alisons have provided psychological advice on hundreds of serious cases and advised and trained the police, CIA and FBI on how to deal with the most dangerous suspects using their model of rapport-based interviewing, known as ORBIT (Observing Rapport-Based Interpersonal Techniques).

Their book, Rapport reveals the four styles of every human interaction and helps you understand them and shape every conversation. It provides the tools you need to create instant rapport which they state is ‘the bedrock of healthy relationships and the secret weapon of effective communications.

Rapport opened with one of the best introductions to a book I have ever read. So much so that I announced it was a book everyone should read – before having completed it. It’s a sentiment I still stand by, now that I have finished reading it. Communication is the cornerstone of every relationship and interaction you have, and being able to do so well, is a skill that for just about everyone, requires constant practice and thought. In the introduction, they explain that rapport is not about mind tricks, persuasion of manipulation, but rather about building an authentic connection with someone. Rapport, they say is ‘all about maintaining respect, dignity and compassion for others, regardless of how they are behaving towards you’.

They have an incredibly engaging writing style and by using a combination of real-life stories and fictional examples, they explain the four styles of communication including the positives and negatives of each style, identifying what you tend towards and what style the person you’re speaking with is using and how to respond in a way that fosters real communication and achieves the goal of that communication.

It’s a brilliant book that holds valuable lessons and insight into communication and how to become better at it.  I learnt a lot from it and highly recommend it as a must read.

Our core personalities do not have to be the boundary line of our social skills – with effort and practice we can adapt and grow outside of our comfort zone. When it comes to our ability to form connections with others, we cannot leave it down to luck or see it as a luxury; it is actually an essential life-skill.

The Art of Fairness by David Bodanis 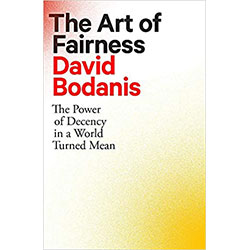 Can you succeed without being a terrible person? That question is the premise of The Art of Fairness and one David Bodanis seeks to answer by looking at historical case studies showing there’s a better path than meanness and deceit. The first half of the book goes through six case studies which illustrate how to wield fairness in the basic domains of life: seeing what’s around you, taking action, defending against danger. These stories show that being decent works. The second half of the book focuses on two individuals to pull those lessons together. US President Franklin D Roosevelt, who used decency and fairness as advantages to help defeat one of the greatest evils the world has seen; and Joseph Goebells, who used lies, violence and threats to incite hate and build himself up. A strategy that in the end failed and destroyed him.

The way he uses historical stories to illustrate a point reminded me of Malcolm Gladwell’s books and the way stories can be used to make a compelling and memorable case. Safe to say if you like Malcolm Gladwell’s writing, you’ll enjoy this book. Those stories make the book enjoyable and memorable, and he tells them so well. Throughout the book he comes back to the famous quote of the ancient Sage, Hillel ‘If I am not for myself, who is for me? But if I am only for myself, what am I?’. In each story you see how neither extreme will do; how you need to stand up for yourself so as not to be taken advantage of, while at the same time not becoming too self-absorbed that you forget those around you. It is a fascinating book and it opened my eyes to stories and histories I wasn’t aware of; and of the histories I thought I was well-versed in, it revealed new angles and details I didn’t know.

All of us are shaped by our companions, yet we usually have a choice in who those companions will be.

Nodding Off by Professor Alice Greggory 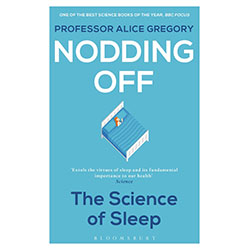 In Nodding Off, Professor Alice Gregory discusses the science of sleep, the crucial role it plays in our overall wellbeing, and how it changes from cradle to grave.

Although this book started off very engagingly and I tagged it like crazy, it did induce the action of nodding off in me quite a few times.

This book is incredibly comprehensive covering all aspects of sleep and sleep disorders, and I liked how Professor Alice Gregory split the book up into different stages of life. It makes it easier to read sections pertaining to your life. But to that end, it can be a cumbersome read to those who aren’t after understanding sleep at every stage of life. For example, should you be over the age of 26 but not be a parent or contemplating parenthood currently – chapters 2-6 just aren’t going to resonate with you and that’s a fair chunk of the book.

That is not to say this book is not informative or filled with interesting titbits. I loved learning new things, like that dolphins sleep one brain at a time to allow them to continue moving, or that at birth our circadian clocks are not developed which is why a baby’s sleep wake schedule is not 24-hour based, but I found the book to be more of a research journal than a practical tool.

If you are interested in the science of sleep, sleep studies, discussing research and definitive conclusions aren’t necessarily important to you, this book is for you. If you prefer to understand sleep on a more practical and applicable level, I think Fast Asleep by Dr Michael Mosely might be a better fit for you.

How to Make the World Add Up by Tim Harford 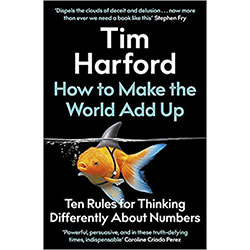 Since 2007, Tim Harford has been presenting a radio programme on the BBC called More or Less, a show about numbers in the news and in life. In More or Less, Tim and his colleagues evaluate statistical claims that emerge out of the mouths of politicians or in the newspapers, such as the prevalence of strokes, the evidence that debt damages economic growth, and the like. Coming from a background in economic theory (not statistics), when he started presenting More or Less, his attitude towards numbers was defensive, cynical and limited to spotting flaws and tricks. But with each claim he and his colleagues unpicked and when fans of the show complimented how they debunked false statistics, he realized that we’ve lost our sense that statistics can help us make the world add up. Yes, they can be used to spread misinformation, but when used honestly and with wisdom, statistics can help us understand the world in which we live. In this book, Tim shares some common sense principles he learnt on the job that can help the reader evaluate claims from the media or every day conversation and in so doing, determine what they can trust.

In his introduction, Tim Harford asserts that statistics is a vital tool for understanding the complex world in which we live. He writes, “Of course, we shouldn’t be credulous, but the antidote to credulity isn’t to believe nothing, but to have the confidence to assess information with curiosity and a healthy scepticism”. To help us do that, Tim shares his common sense principles as ten rules and a golden rule, where each chapter is devoted to discussing a different rule. This book simultaneously reminded me of Charles Duhigg’s The Power of Habit and Factfulness by Hans Rosling. The former because of how both authors communicate the insights they wish to impart on the reader in the same, almost story-like way, such that their information-packed books are effortless to read. The latter due to the overlapping themes of how honest statistics can and should be used to understand the truth about what is happening in the world. So much of this book resonated, but for me two insights particularly stuck. The first being that if we allow our emotions to go unchecked, they will influence how we interpret information and could put us in danger of fooling ourselves. Second, when confronted with new information, be curious, think, ask questions, and examine it from all perspectives. Maybe these insights stuck because I already felt so strongly about them prior to reading this book. Regardless, being able to independently assess and understand information so that you can determine what’s true is a crucial life skill in my opinion and Tim Harford’s common sense principles would be wisely employed to this effect, because as everyone knows, common sense is not so common…

This month we’re introducing a different way of linking to purchasing our book recommendations. If a kindle or audible version is available, we have linked to its Amazon page below. As prices are displayed in $, we have roughly multiplied that $ value  by 15 to give you an approximate Rand value. Where a digital version is not available, we have provided a local link to purchase the physical book.