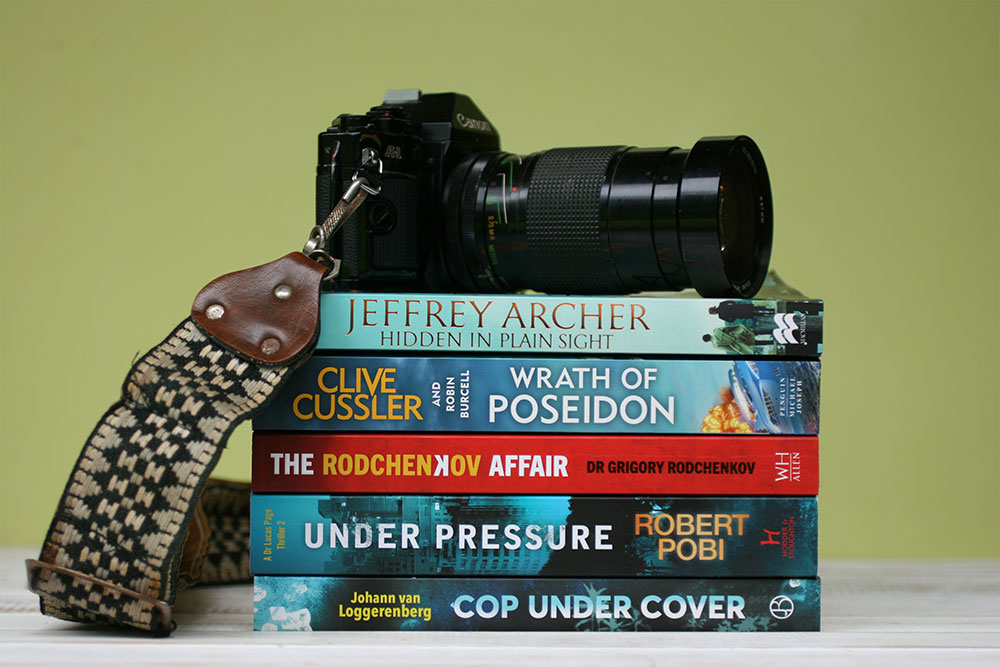 Ask The Expert: How to Treat a Sprained Ankle

Wrath of Poseidon by Clive Cussler 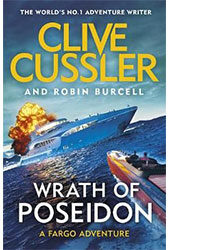 Poseidon’s Trident. Legend has it that it’s a cave in which the hoard of gold stolen from King Cyrus in 546 BC was hidden. Most of the islanders on Fourni however, think it’s just that; A legend, a myth, a tall tale. That is … most of the islanders. But not everyone. Ten years after Sam and Remi first became entangled in the hunt for the fabled treasure, a ruthless and vengeful rival reappears on the scene, forcing them to return to Greece to renew the search. Will they eventually find the gold after all these years? And can they find it first? Because if they don’t, it won’t just be the treasure on the line, but …. their very lives.

Wrath of Poseidon is part of Clive Cussler’s series, The Fargo Adventures. The book begins in the present ( Chapter 1), goes back ten years (from Chapter 2) to when Sam and Remi’s adventure in Greece first started, and then returns to the present in the last few chapters of the book. This chronology meant that while you didn’t know how events were going to develop, you knew the outcome of certain elements of the plot. For me, this lessened the impact of some of the more suspenseful moments. However, at its core, the adventure is about the search for the treasure, and in this regard, the reader is kept in suspense wondering whether it really exists and if it’ll be found. The fact that the plot isn’t tunnel-visioned on the protagonists’ hunt for Poseidon’s Trident, but is layered with their narrative, their relationship with each other and the other characters in the story makes this a more engaging and enjoyable read.

The Rodkenkov Affair by Grigory Rodchenkov 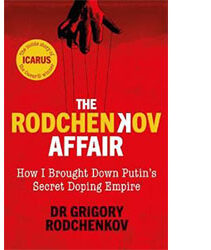 Dr Grigory Rodchenkov was a leading chemical scientist and the director of the Moscow Anti-Doping Centre. On the face of it, he was at the forefront of global efforts to detect cheating in sports. Behind the scenes, he was running one of the most elaborate doping schemes in history, letting hundreds of elite athletes dope their way to medals undetected. As many of those who followed the Russian doping scandal will know, that scheme was slowly uncovered and Dr Rodchenkov fled Russia in fear of his life. This book is his story of that doping scandal and is taken from his diaries, emails and memos he smuggled out of Russia.

While reading this book I was reading No Rules Rules, the Netflix book. In it Reed Hastings shared the story of how they bid for Icarus, the moment it went big and won an Oscar. Icarus, for those that aren’t aware, is a documentary that started as Bryan Fogel’s experiment to see if he could dope and get away with it. After he had contacted Dr Grigory Rodchenkov, that documentary pivoted to becoming a geopolitical thriller that would uncover the biggest doping scandal. I get a thrill when a book mentions a book I’ve read, even more so a book I’m currently reading.

In his introduction, Dr Rodchenkov gives us a peak into his life now – as a whistle-blower exiled in America, separated from his family, alone and hidden from the public. At the get-go, he states that it is not a book written to justify his actions or make excuses. It is simply his truth. He keeps that promise. He is unapologetic throughout and bluntly shares his own doping history, how he landed his job and how he covered up positive test results. It’s a fascinating jaw dropping read and one in which I learnt more about doping, how it works, and the drugs used, than I ever could have from media clippings. The level of deception is unreal, but most unreal is how athletes who were doping deny it with such fervour, as if they had zero control of what went into their own bodies.  He doesn’t shy away from stating that he is pro-doping and after reading about his first experience with doping (administered by none other than his mother) and the effect that had on a training run after, I thought to myself, “wow, that sounds incredible – to run so fast, so effortlessly, to be able to go out and do another 21 km without pause”. If you’ve followed the Russian doping scandal, this will be a read you’ll devour and appreciate.

In the beginning of the book, he provides a glossary of words commonly used in sports doping and explains each in depth. If you’ve read my reviews, you’ll know how much I appreciate when authors do that.

The real purpose of doping is not to build muscles, but rather to help the body recover from competition, or survive the rigours of training. 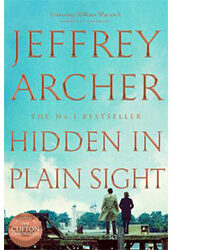 Set in London, in 1986, Hidden in Plain Sight features Detective Sergeant William Warwick who has just been reassigned to the drugs squad. His first case is to uncover who the notorious South London drug lord, known only as The Viper is.

As the drug squad gets closer to uncovering the criminal network, an old enemy of William – Miles Faulkner resurfaces. Instead of working on one case, William is now trying to bring two men to justice.

I devoured most of this book over the course of 24 hours. It took me a few chapters to get into it and learn the characters, but after that, the story really took off. It’s filled with little twists and turns, has nods to the time it is written in, and like any good novel, becomes more gripping and page turning as you near the end. Like the last Jeffrey Archer book I read, as I hit the end of the book, my first instinct was to scramble through the last few blank pages, desperate for more of a story I wasn’t quite finished with. Archer has an uncanny ability to tie up loose ends so loosely that you understand the book is over, but also want at least another chapter to tighten those loose ends. A fantastic, easy to read detective thriller. 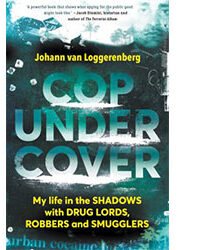 In this memoir, Johann van Loggerenberg details his life as deep-cover police agent RS536 during the 1990’s.

In his early twenties, a time that most use to carve out their identities and path in life, he took the road less travelled to spy for the public good. Taking on the Durban underworld, he crafted a new identity which enabled him to rub shoulders with drug lords, smugglers and corrupt cops leading to drug busts, bringing down an international drug ring, foiling a bank heist and many other public safety wins.

This book begins with an author’s note in which Johann addresses the rumours and lies spread about him once his deep cover role came to an end. In it he said, “In 2014, the Sunday Times, the country’s biggest-selling newspaper, named me in a headline as a ‘former apartheid undercover police agent’. This slanderous label would stick, and be endlessly parroted and repeated on social media, in wider and wider circles and to an increasing number of people.”

Not only did this highlight the careless attitude media outlets can have when reporting stories that could affect the course of real people’s lives, but it also set the tone for how I viewed what this book was about.

I did not know about Johann van Loggerenberg, nor the media scrutiny he has faced before reading this book, so I went in with an incredibly open mind. The more I read, I felt his intentions in writing it were more for those who knew him, know him, heard of him, read the media stories about him and/or incorrectly judged him. I saw this book as a form of vindication, therapy, apology, and appreciation for him.

Although I felt that I didn’t fit into what I assumed was the intended target audience for this book, I chose to read it because I thought it would be an interesting and important story and open my eyes to a part of South African history that I knew nothing about. This book was exactly that. It educated me and made me proud to know that despite all the challenges that South Africa has faced and still faces, there are good eggs who selflessly put serving other before their own needs. You can’t read it without seeing that Johann is one of them.

Under Pressure by Robert Pobi 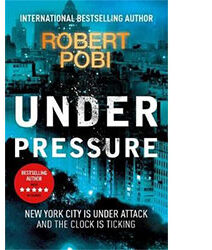 This thriller opens with a tech company’s private party at New York’s iconic Guggenheim Museum. When an explosion instantly kills the 702 people inside but keeps the building intact, the FBI calls in former FBI agent and astrophysicist Dr Lucas Page to help get to the bottom of the attack. Were all 702 victims targets or was there 1 target and the rest were in the wrong place at the wrong time?

When a second bomb hits the city and the police start chasing a lead, Dr Page thinks he sees a different pattern and motive and gets into overdrive to find and stop the killer before the city is attacked again.

Despite the adrenaline packed thrilling storyline and unique characters, there was something about this book that just missed the mark for me. Naturally, I’ve tried to pinpoint why, as opinions are personal and what bothered me might not bother you.

Firstly, there were two isolated and weirdly inserted mentions of COVID that felt plopped in to make it current but didn’t fit within the story line. The first came in the introductory scene when a character at the party mentions “months of homebound COVID-19 boredom” but is simultaneously at a packed party hugging and kissing acquaintances. I know it’s a novel which certainly does not need to be realistic, but why even put that in? It’s not like COVID was alluded to again either directly or by the behaviour of any of the characters, until a much later spraying a counter scene, and I think this immediately threw me off.

Secondly, despite creating a truly interesting and heroic main character in Dr Page, I felt he lacked an arc in growth and stayed linear throughout tremendously challenging experiences.

Thirdly, there was too much death for my liking. I wanted him to keep more characters alive, especially ones he built up, but maybe that was the point. Maybe he wanted to induce some feeling from the reader when characters died.

And lastly, the reveal of the killer was not as dramatic or unpredictable as the storyline built it up to be.

That being said, it was not a bad read and if my four notes are non-issues to you, you will likely enjoy it.

Ask The Expert: How to Treat a Sprained Ankle