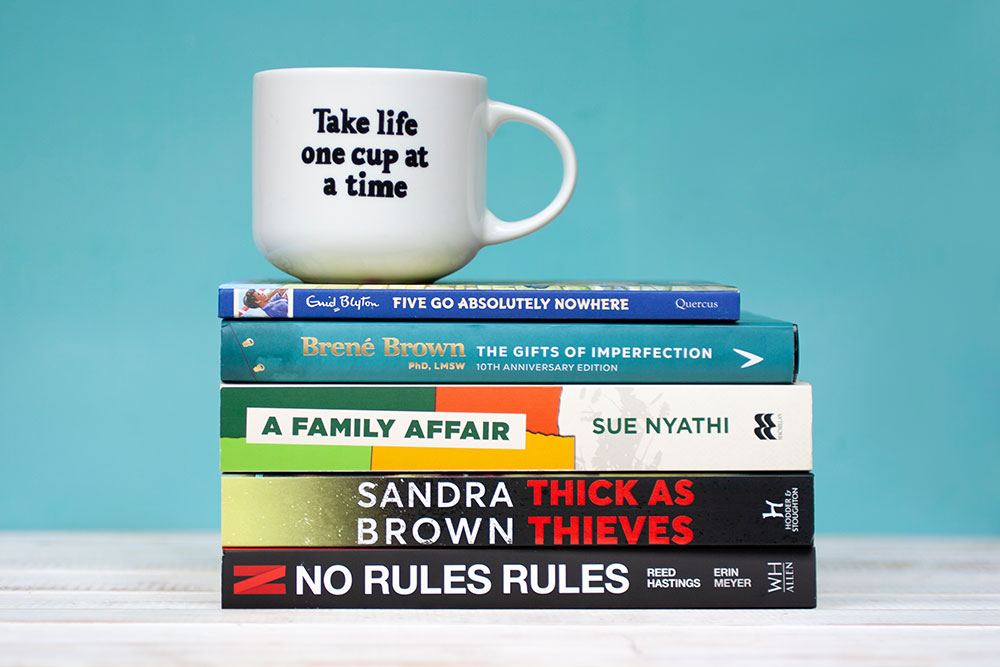 Our Book Recommendations November 2020 are here.

Thick as Thieves by Sandra Brown 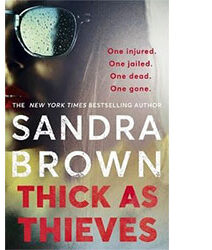 Thick as Thieves is a novel by New York times Bestselling author Sandra Brown. In it she tells the story of a twenty-year-old heist in which four burglars walked away with half a million dollars. Except they didn’t quite, because by the next day one was dead, one was in hospital, one was in jail and one got away with it.

When the daughter of the suspected thief who is believed to have gotten away with money and murder, decides to return to the town and home in which it all took place, she opens old wounds and find herself in the crosshairs of her father’s co-conspirators.

The house is a house. It’s made of destructible materials. All the shit that took place in it when you were a kid will be with you for the rest of your life. It’s not inside the house, it’s inside you. Curse it, accept it, and then turn your back on it.

A Family Affair by Sue Nyathi 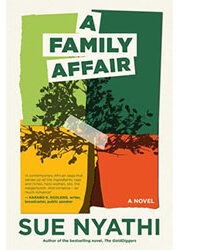 Set in Bulawayo Zimbabwe in the 90’s and early aughts, A Family Affair follows the Mafu Family. On the surface, the Mafus appear to be a close-knit traditional picture-perfect family. Pastor Abraham and his wife Phumla are leaders of the Kingdom of God Church and pillars of the community. Together, they have three children: Xoliswa, a bright and independent career woman who has returned home, after working abroad, looking for a new start and a chance to revive the family business. Yandiswa, the loud and rebellious middle child who appears to be settling down with the love of her life and getting her act together. And lastly, the youngest, Zandile who follows tradition by getting married and having children only to discover that domestic bliss isn’t her happily ever after. A family Affair follows each of them, as their personal lives unravel, secrets come to light and the façade of the perfect family fades away.

Halfway through this book I described it as a juicy soapy but better because it’s fast moving, and no one dies and comes back to life. Having finished the book, I still stand by that description but would add that there is more to the novel than just a juicy story about a family that includes plenty romance, secrets and drama. Sue Nyathi manages to bring to life Bulawayo, Zimbabwe as it was in its hay day and chronicles it’s decline through the eyes of the middle class Mafus. She also manages to tackle difficult topics like religion, sexism, unwanted pregnancies and abuse in a very honest, raw and unfiltered way that at points was hard to read (reading about women being abused, assaulted and demeaned even through fictional pages is upsetting). However, it also felt like a more realistic portrayal of being a woman in a deeply traditional patriarchal culture that holds men as the rulers who can make and break rules as they please. In this interview Sue Nyathi speaks about using fiction to tackle difficult topics and create conversations around them, and she’s done that in A Family Affair, which had me thinking about the storyline and topics for days after I had read it.

The only thing I wish it included was translations of the Zulu words and phrases sprinkled throughout. In a previous review of the book The Henna Artist I mentioned how much I enjoyed and appreciated the index of the Hindi words and expressions used. It meant that whenever they came up, I was able to flip back to their meaning, understand and immerse myself in the culture of the book. In A Family Affair, their use added to the narrative and transported the reader into the African culture of the book, but as someone who doesn’t speak Zulu, not having a reference made me feel like I was missing something.

Overall, it is an evocative, moving and memorable read with characters who are complex and authentic. It also has an ending so cruel, yet so perfect for the book, that delves behind the picture perfect façade of family life and isn’t afraid to bring the darkness to light.

It’s not enough to tell woman to leave, they need to have a place of refuge that they can go to when they leave.

The Gifts of Imperfection by Brene Brown 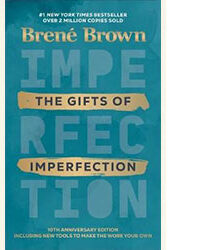 This particular copy of The Gifts of Imperfection is the 10thanniversary edition of the #1 New York Times Best Seller by Brene Brown and includes a new note from Brene on how her life has been transformed by the ten guideposts, and an integration index to allow you to work through the book. This self-help book covers 10 guideposts that according to Brene Brown get in the way of wholehearted living. She explains wholehearted living as engaging in our lives from a place of worthiness and enough. The ten guideposts include letting go of what people think, perfectionism, comparison, scarcity, self-doubt and the need to always be in control. Each guidepost is its own chapter and through stories and research she explains each one and how you overcome them to embrace your true self, imperfections, and all.

This is a book undoubtedly for Brene Brown fans and it took me a few chapters to get into the book and appreciate it. As a self-improvement book, it’s not one you speed read through but rather work your way through chapter by chapter, and one you would come back to. She has an easy way of writing and explaining topics that comes across as genuine and not preachy. While not everything resonated with me, there’s a lot of valuable advice throughout the book and she talks openly about shame, fear, authenticity, anxiety and the beauty of being ordinary and embracing the ordinary moments.

Fitting in is about assessing a situation and becoming who you need to be to be accepted. Belonging, on the other hand, doesn’t require us to change who we are; it requires us to be who we are.

No Rules Rules: Netflix and the Culture of Reinvention by Reed Hastings and Erin Meyer 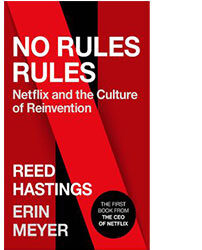 Written by the co-founder and CEO of Netflix, Reed Hastings, together with professor at INSEAD Business school and author of the Culture Map, Erin Meyers this book dissects the no rules, rules culture at Netflix. It chronicles Netflix’s journey from online DVD rental company to fully fledged entertainment giant whose name has become a verb. Netflix is a global company that has gone through enormous changes to adapt and grow in the face of a changing market. The culture of Netflix is well known and controversial, it is one that is radical and unorthodox but one Hastings credits much of the success of Netflix to. In this book, Hasting and Reed, through thousands of interviews with past and present Netflix employees, aim to teach us how to create a working culture like the one at Netflix. A culture that when employed correctly can mean the difference between becoming a dinosaur and an evolving empire.

As a story alone, the story of Netflix is fascinating. They’ve managed to transform from DVD rental, to online streaming, to buying exclusive rights to shows to producing their own shows to a global company. They have done what few companies have done and have become a verb and this books gives you a small look at how they’ve done it. It’s no doubt intended to be a business book and teach you how to take their ideals and import them into your own organisation. However, regardless of whether you have a company and would want to learn from Netflix, it is a book brimming with insights. For me, one of the best lessons I took from it was around receiving and giving feedback. Reed explains the Netflix “rule” of not saying anything about someone you wouldn’t say to their face and explains that feedback should always aim to assist and be actionable. On the other hand, when receiving feedback, you should appreciate it for what it is and how it can help you be better and then choose to either accept it or discard it. Feedback is one of the most important things we need to grow and improve but it’s both hard to give and hard to receive, especially when it is not positive. The chapter on feedback has changed how I look at feedback given to me and the way I choose to give feedback and the importance of being kind, even when being critical.

We learn faster and accomplish more when we make giving and receiving feedback a continuous part of how we collaborate. Feedback helps us to avoid misunderstandings, create a climate of co-accountability, and reduces the need for hierarchy and rules. 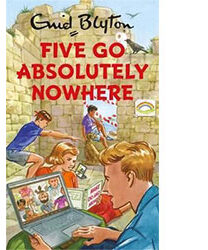 Five Go Absolutely Nowhere is part of a spoof series for grown-ups, in which Enid Blyton’s Famous Five are reimagined as adults. In this instalment, Julian, Dick, George, Anne and Timmy are having a short vacation on Kirrin Island when the announcement comes through that the entire country must stay put. Stuck on the island for the unforeseeable future with limited supplies, The Five must figure out how to work, entertain and sustain themselves, and most importantly…discover who’s stolen Dorset’s entire supply of lavatory paper.

When I was younger, Enid Blyton’s The Famous Five and The Secret Seven were my absolute favorite books. I had no idea when I began reading this that it was a reimagining of The Five as adults, so when I eventually figured this out (a chapter in), my reaction was inevitably typical of someone with a (most probably) romanticized memory of a childhood favorite; The way the characters have been reimagined just didn’t appeal to me. They’re adults now (Julian is hitting forty), but to me they came across as children in adult bodies, which did not endear me to the characters as the original series did. However, after reading an interview in which Bruno Vincent explains that he used The Five to mock modern life and the trials we face as adults, I saw this book in a different light. Although this is not the beloved version of The Five and their adventures from my childhood, I appreciated how seamlessly Vincent has satirized modern values and the crazy time we’re currently living in through The Five’s lockdown on Kirrin Island. All in all, the humor truly translates and if you enjoy satires, you’ll find yourself laughing throughout this incredibly light 105-page book.

On Our Bedside Table: Drugs, Secret Agents and Hidden Treasures