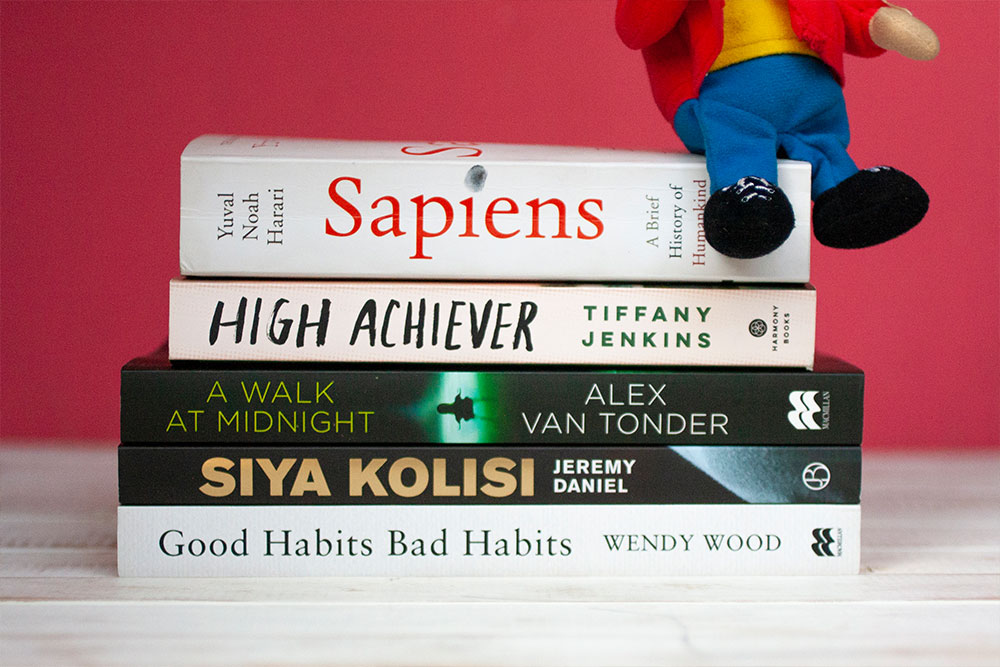 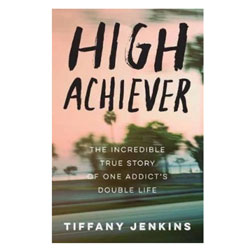 This book is the real-life story of Tiffany Jenkins, a former drug addict. In vivid detail, she shares how she got addicted to drugs, lied and stole from family and friends, alienated everyone around her, and finally ended up in a Florida Jail. She takes the reader into the mind of an addict and gives a shocking look into what incarceration looks likes. What makes hers a unique story is that at the height of her addiction and at the time of her arrest, her boyfriend was the sheriff’s deputy. The officers that arrested her, questioned her and put her in jail were people she knew – and had socialised with.  It’s a tragically desperate story, yet her ending and how she managed to turn her life around and beat addiction provides hope for pulling yourself out of the darkest depths.

I later learned that she has a successful blog called Juggling the Jenkins that she uses to help women struggling with motherhood, addiction and mental health.

I had my first jaw drop, eye widening, what the actual moment before I finished the first page. She doesn’t hold back on any horrifying detail and the way she’s written it, feels like you’re eavesdropping on her therapy sessions. It’s a can’t put down book, I gobbled it in a day. I needed to know not just how her story ended, how she managed to deceive the officer she was living with and land herself in prison. While listening to her go into what she did makes it hard to empathise with her during the book, the fact that she managed to turn her life around so dramatically and use her experience to help others is nothing short of incredible and inspiring. It provides hope that no matter how bad things are, you can turn them around.

2. A Walk at Midnight by Alex Van Tonder 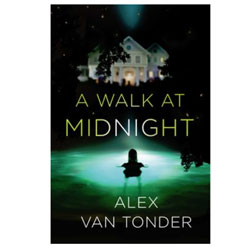 This novel tells the story of Jane Ronson, a quirky, bold an unapologetic writer. It weaves through her complex and troubled life. It is heavily centred around her relationship and marriage to Colin, who has recently become the governor of New York. When he dies in a way that mimics the contents of her soon to be released novel, she becomes the centre of the investigation and all those close to her are questioned.

The book jumps between the “present tense” of all the book’s characters being questioned, to the timeline of life defining events in her life, told in her voice. It creates an interesting back and forth on how your perception of characters changes through different people’s lenses.

When I read the description of this book, I thought it would be more thriller style scary than it was. I hate scary movies so for me this was a good thing. This however does not mean it is a sunshiny read. It is thrilling and dark and despite the WTH moments you have as you get to know Jane more, it’s a I-can’t-put-this-down must-know-how-it-ends read. I devoured it in a day.

Less than a third into the book I felt I knew where the plot was going, it came across as predictable. But just as quickly as Alex van Tonder leads you to think you know what’s going to happen, she makes you second guess yourself and ultimately gives you an ending that does not disappoint.

You could tell throughout the book how current it is and how on the pulse van Tonder is with pop culture, trending news stories and new age movements. It manages to weave a host of these stories into Jane’s in a way that does not feel it was placed there to be on trend. From sexual assault, victim shaming, men in power taking advantage of women, gun violence in schools, social media virality to cyber stalking. I did laugh out loud when things like “avocado toast” and “charcutery board” were mentioned – very Instagram and very now.

Despite it being a novel, I felt there was an overriding message and lesson to this book, which focuses on relationships. It powerfully demonstrates that only through the luxury of time, can we truly come to understand and appreciate ourselves and the people who shape us. 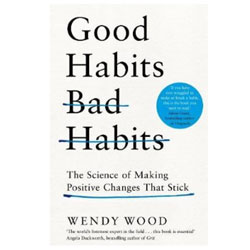 Wendy Wood is a Professor of Psychology and Business who studied habits for three decades. In her book, Good Habits Bad Habits she goes into detail how habits are made, and how to make good habits and break bad ones. She explains how same learning mechanisms are responsible for our good habits (ones aligned with our goals) and for our bad habits (the ones that conflict our goals). The goal of the book, she says, is to show you how to use your conscious understanding of goals to control your habitual self. If you know how habits work, you can sync habits with goals. By habitual self, Wood means that most of what we do, 43 percent of the time according to her research, is done by habit – without any conscious thought. That’s a startling amount, and as she goes through examples, you realise that much of your day is dictated by habits.

I’ll admit that I found this book hard to read and that it took me longer than I thought to get through it. The book cover states that the book is about “the science of making positive changes that stick” and that’s a very accurate description of what you can expect. As a Professor who has spent her career researching habits, the book is heavy on research studies and often reads like an academic paper, which isn’t the easiest to get through. I sometimes felt myself wishing for her to get to the point; because when she did there was interesting bits and good advice to unpack.

Without going into too much detail, two ideas she spoke about that I really liked and learned from was the ideas of effort and friction.

Using the example of running, she explained how the hardest most effortful run is always the first. But that effort doesn’t last, habits form and take that effort away. As a runner, I know that to be true, but it’s something that you can apply to any new habit – if you can just get past the first few tries, the effort, eventually it becomes second nature. And she explains how to do that.

If you can get past the many studies and academic parts of the book, you’ll learn how to break bad habits, (like constantly checking your phone), and how to make good ones, (like exercising regularly).

4. Siya Kolisi Against All Odds by Jeremy Daniel 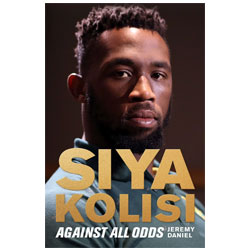 Written by Jeremy Daniel who wrote a series of sports biographies for young children, Against the Odds tells the story of Siya Kolisi. The book begins with a 4-year-old Siya Kolisi and traces his steps from living in a small township near Port Elizabeth with his grandmother all the way to present day as the first black caption of the South African Rugby Team. The book details how his father first introduced him to rugby, how he found a home in the African Bombers Club, a small local rugby club in the township. How his talent and dedication was discovered and led to a life changing scholarship, and his rocky injury filled road to his current position. Siya’s story is one of grit, determination, hard work and luck and shows how the kindness of strangers can positively impact someone’s life.

The majority of South Africans will be familiar with Siya Kolisi, and most of those familiar somewhat with his story. He has an incredible story, that is undeniable, and I wish the book would’ve delved into that more. Jeremy Daniels interviewed a handful of people from Siya’s life, but not Siya or his wife Rachel. The details of the book are thus taken from those people, the research he did on the internet and through re-watching rugby games. Throughout the book I found myself wanting less rugby and more Siya. Not negating the impact rugby had on his life, I was hoping to learn more about him and gain insight into how he got to where he is and what that experience is like – the details you can’t google.

It’s a book for the hardcore rugby fans, that are happy to go into details of past games. I guesstimate that half of the book is detailed playbacks of Siya’s past rugby games, which to be honest, for someone who is not the biggest rugby watcher, flew over my head. It’s well researched and I can appreciate the effort it took, but for me it wasn’t a captivating read. 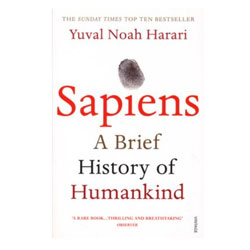 Dr Yuval Noah Harari has a PHD in history and specialises in world history. In Sapiens he tracks the history of humankind from the very beginning of time, some 13.5 billion years ago until present day. In the most captivating way, he shares how humans went from the middle of the food chain to the top. He takes you through every single revolution, the cognitive, agricultural and scientific and how each altered the direction of humankind and the world. You’ll learn how things like money came to be, how empires were built and destroyed, and the damage humans have inflicted. It’s history that we don’t think of and seeing how we evolved to where we are is fascinating but also at times disheartening.

This is one of the most fascinating and mentally stimulating books I have read. I read it slowly, trying to take it in and found myself to randomly be quoting bits of the book during conversation. It’s equal parts fascinating and depressing. Near the beginning he states that historical records makes homo sapiens look like an ecological serial killer. We’re the deadliest species in the annals of biology and have the unfortunate record among all organisms for driving the most plants and animal species to extinction.

He touches on so many interesting topics from the fact that since the agricultural revolution most societies have been patriarchal to the fact that money is the most universal and most efficient system of mutual trust ever devised. He questions whether each revolution has really made humans happier, why some empires and nations grew and conquered, while others died out, and what the future of humanity might look like.

As the cover states, it is a brief but very comprehensive history of humankind. As to why we study history, Harari says that it’s no to know the future but to widen our horizons, to understand that our present situation is neither natural nor inevitable, and that we have more possibilities before us than we imagined. If you want some serious food for thought, this is a brilliant book.

A list of Every Spice I Have and Why