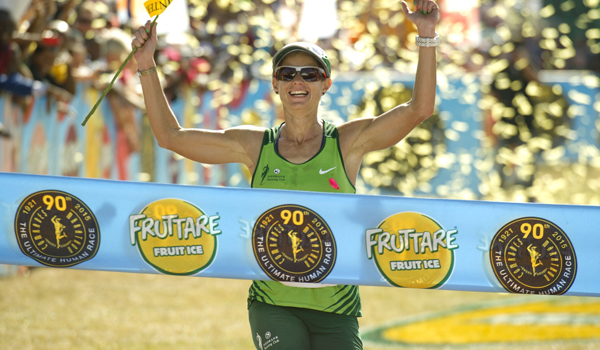 After hearing of her climb from a bronze Comrades finisher to a top 10 in the space of five years [all on her own training] we accurately predicted she’d be gunning for 1st place on her next attempt.

What we didn’t predict, and what no one could predict, is that not only would Caroline go after that number 1 spot, but that she’d take it with a 21 minute and 2 second lead from second place finisher Charné Bosman and that she’d do that mere weeks after her out-of-nowhere Two Oceans win.

In the space of a year Caroline Wostmann went from being one of the many great South African runners who are barely recognised, to the darling of South African road running. How did she do it?

If you read our story on Caroline Wostmann, [and if you haven’t – do so IMMEDIATELY!] you will quickly see that Caroline winning the two biggest titles in South African long distance road running was not out of nowhere, was not an act of chance and it didn’t just happen.

Over the past seven years Caroline has ‘slowly’ and thoughtfully been inching her way towards her dream of winning Comrades and did what so many top Comrades finishers have not been able to do when she made her dream a reality.

Naturally, we had to sit down with her again and get inside the mind of a real superhero. From our chat we picked out the ‘Secrets’ to her success and we want to share them with you.

No matter what you want to achieve in life, the steps below are rules to live by and with this recipe to success anyone can go out and achieve their version of GOLD.

How did Caroline Wostmann get from bronze to gold on her own?

There’s so much information out there. It’s up to you to find it, internalise it and make it work for you.

When she was looking for a coach and met with Lindsay Parry for the first time she made her intentions clear. “I said I wanted to win Comrades one day [not necessarily now] do you think you can help me do that?”

Big goals are like stepping stones. “Always aiming to improve is something that is attainable and when you don’t reach your goals picking yourself up and trying again [is critical]”

“The biggest thing that changed [when Lindsay became her coach] was consistency. Before I would constantly doubt myself. Because I got injured before, if my legs were tired or my muscles were sore, I’d take a day’s rest. When Lindsay gave me a program and I’d think it was too much for me because my legs were sore, he’d say run again tomorrow and we’ll chat tomorrow, and he pushed me along. The consistency improved.”

The year that Caroline Wostmann got injured after achieving her Silver medal she thought that maybe she wasn’t ever going to be good enough.

“I could have seen that as a really bad unlucky year but I see it as a blessing because I learned about my weaknesses and started a strength program which made me a better runner.”

When you have obstacles, learning that those obstacles can actually be stepping stones to the next level takes a failure and makes it a success.

If you read our original story, you would have seen that every year Caroline Wostmann went for another medal. From Bronze she wanted a Bill Rowan, from her Bill Rowan she wanted Silver, from Silver she wanted Gold and from Gold she wanted to win. If you have then looked at Caroline’s Comrades records you will see that every time she started Comrades she reached her goal. What would have happened if she missed it?

“I think that the next year I would have gone back and just tried for the same goal again BUT I would have assessed it. I would have asked myself why. Did I have a bad day? Did I not do enough in training?”

Caroline believes if you do everything you thought were the right things but missed your goal, you weren’t doing everything right.

“I think there are certain limitations [to achievements], like for me I’ll never be able to go and be an 800m track athlete, no matter how much training I do, I don’t have the muscles that fire quickly enough and will never be fast enough, but over a longer distance if you get the training right – everybody can up to a certain point.”

When Caroline Wostmann ran the first marathon she had trained for with Lindsay (December 2014) she went for the time she wanted to get, not the time he thought she could get.  “He said you can run a 2:48:00, I said to him I want to run a 2:45:00. He told me that it was a little ambitious, I should try for a 2:48 and if I was feeling really good at the end to push it.”

At the time she got Lindsay as a coach Caroline Wostmann doesn’t think he knew that she had it in her to win, but she knew that she did. “I think he has been surprised the whole way through.”

“In my mind, when I had a goal, I knew that I could [achieve it] and it would frustrate me that other people couldn’t see it. I find it better now that people believe in me and I can just do what I want to do without having to try and prove myself.”

After her surprising 2 Oceans win, no one thought she could win Comrades, including her coach (which he did not share with her).

“Everyone said I can’t and my response to them was if I don’t it doesn’t matter – I just won Two Oceans!”

There was pressure on her because suddenly everyone knew who she was but in her mind she celebrated what she had already achieved and didn’t let that expectation and negative speak leak onto her future.

“If you’re consistent, stick to your plan and prioritise your training over other things [then you can achieve your goals] and that’s where the difficulty comes in. There are always things in life [that are distractions]. Are your going to choose to train or are you going to choose the other things. It is hard.”

Caroline Wostmann thinks that if you do the above (see number 9) that in Comrades most people can get a Silver medal. But what happens from Silver to winning, or in other spheres of life from being good to the best. Are you either it or not?

“I don’t know that because I know that I have worked very hard, I have trained very hard, it has not just fallen in my lap. I think that most people aren’t willing to make the sacrifices. Everyone wants success but when they see how much work it takes to get there, then they don’t want it anymore.”

“Are you willing to run 200km a week, spend 5 hours in the gym, spend 2-3 hours doing sport massages and physio every week so you can recover properly, spend an hour a week in ice baths, not having any leisure time, not going to movies, not watching TV, not reading books, because there is no time. It’s all about training and work. I don’t know if everyone would want to get a gold medal that much.”

In March before Two Oceans, Caroline Wostmann was doing her masters, getting less than 5 hours of sleep a night but still worked hard to train at the level which enabled her to win 2 Oceans.

“The price of success is hard work, dedication to the job at hand, and the determination that whether we win or lose, we have applied the best of ourselves to the task at hand.” Vince Lombardi

The difference between her 6th place and first place finishes? Caroline Wostmann got a coach.

“I wanted to get a coach because I didn’t know what more I could do on my own. I felt I had done everything I could for the 2014 Comrades and that was where my limits by myself were.”

“I am realistic with my expectations for myself. I know what I’m capable of and I know what I’m not. I do think I can win Comrades again and I want to try and do that but I don’t think I can go to the Olympics and win the marathon, because it is not my strength.”

“Everyone seems to think I can make the Olympics because I won Comrades and I don’t know that I can or if it’s even in my goal list… but I just said if it happens it happens. I’m going to run the best marathon I can run and if it’s meant to be, it will be.”

“I do believe that things are possible but you need to decide what you want. You can’t do everything even if people think you can.”

“I have a relationship with Comrades. Comrades is like my Olympics. When I grew up watching Comrades as a child that was the race of superheroes to me. I see myself going to Comrades every year and trying to go and win and see what happens.”

Caroline Wostmann ran her first Comrades on only water and she says, “It was terrible. I think that’s why it was my hardest. I do not recommend to anybody to not take energy drinks. You need carbohydrates – you need your energy stuff.”

Towards the end of Comrades 2014 Caroline had taken in too much water and was feeling very nauseous. “Everything was sitting in my stomach and couldn’t get absorbed. I then couldn’t take in anything because I was too nauseous and it was horrible.”

“You can’t plan too meticulously in an ultra because there is too much room for mistakes. I didn’t get my drinks in the beginning of Comrades because Haiko [her supportive husband] couldn’t get to me, so I just took the Energade on the side and was still getting my energy in. It wasn’t ideal but it was ok, had I taken nothing, I would have had a problem.”

She saw that first hand during Two Oceans. “They told us a table with our energy drinks was going to be at 28km and it only landed up being at 33km. When I passed one of the international girls at 32km, she was shattered because she had been waiting for her energy drink and there were so many other things that she could have taken on the side of the road but she didn’t because she wanted that drink and by the time she got it, it was almost too late, she had crashed and ruined her race.”

“I decided at Two Oceans to try and not take any water on the route and to only take my fluids in with energy drinks. Firstly, it gets absorbed faster and secondly, you are getting your energy consistently the whole way through.”

What does she take?

So, are you going to sit on that couch or get up and start?!

Ps. Caroline Wostmann runs the New York Marathon on November 1st so watch out for that. Her goal? “I have no goals or expectations other than to just enjoy the experience”.

We’ve heard that one before 😉