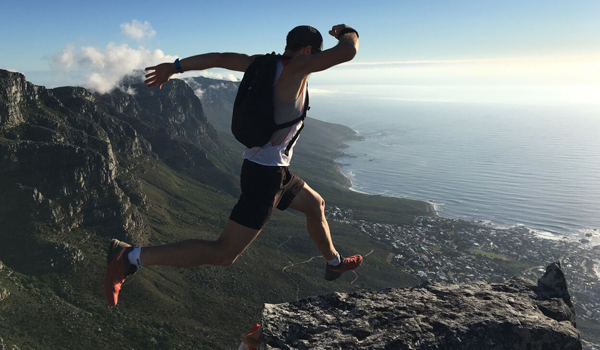 The South African economy loses between R12 -16 billion a year due to employee absenteeism; but two out of three absent employees are not sick.

So where are they?

Christiaan Greyling, an engineer by day and trail runner by night, asked the same question. After conducting a value stream analysis of the Home Choice call centres in Wynberg, Cape Town he was astonished to discover how much valuable time was being wasted due to absenteeism and late-coming.

Instead of analysing and coming to his own conclusions, he decided to walk in the shoes of his employees. Literally. Most of the employees use public transport to get to work, so Christiaan skipped his car and made use of the Metrotrail. The day he chose to use Metrotrail was conveniently the same day protestors set two trains alight, putting added pressure on an already constrained network.  He managed to squeeze on, but as the train departed he noticed how many people were left behind. Stranded, many of them would not get to work.

“We were a few hundred souls who had to squeeze into the already delayed train. At every station more people tried unsuccessfully to get on. Needless to say, the faces I saw outside on the platform would not get to work that morning.”

Incidents like this occur daily, and experiencing what it is like not to have reliable transport moved Christiaan and planted the seeds for a little project he named Project Chance.

Project Chance saw Christiaan Greyling opting to give up his usual luxuries – a home, bed, warmth and transport – and trade it for one week on Table Mountain. Armed with a gas stove, coffee, food and a sleeping bag, Christiaan made his way up Table Mountain to his new home; a little hut. Joined by friends Blake Dyason, Gerhard Human, and Mike de Haast, they would run up and down the mountain every day, spending their days at their jobs and nights in the mountains. They all gave up their cars for the week in a bid to raise awareness for the thousands of South Africans without homes, transport or warmth. 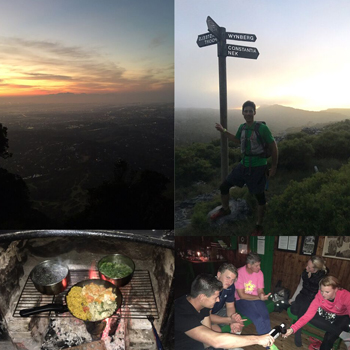 “On Sunday I packed my car with five sets of work clothes and five (plus) sets of running kit. I parked my car at work and set off on a run to the mountain with a gas stove,coffee, sleeping bag and some food. On Monday, I ran straight to work, took a shower at work and step into the office as a normal employee. After work I dashed back to the mountain in the dark and mist and slept in a hut exclusive to club members. I repeated this routine until Friday morning. On Friday afternoon, I ran to Orangekloof camp for the final event of the week”

“I realised that the parents I saw on the platform that morning were the parents of the children with no access to early childhood development, healthy food and general stimulation which kids need to equip them for life.”

Starting Chance is addressing some of the fundamental issues in South Africa and goes beyond simply providing. They understand that an education does not mean to simply provide kids with a school building. Education must be aimed at building the individual and equip them to receive the education in these buildings. 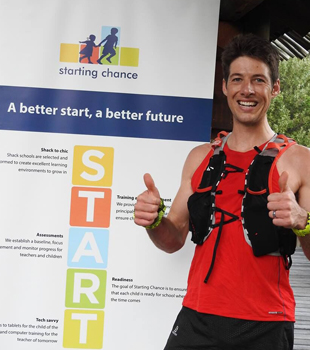 Christian is a huge believer in that education goes deeper. He was drawn to Starting Chance as it is focussed to build the individual, self-esteem, humanity and equip children to receive education. Without a proper foundation, education will not make any changes.

Starting chance equips teachers with the tools they need to be able to provide the next generation of South Africans a solid foundation on which to build a promising future.

Putting his money where his mouth is, Christiaan Greyling put R120 every day he spent on Table Mountain towards Starting Chance. This amount represented what he saved in electricity and transport per day. This together with donations from friends, colleagues and businesses amounted to R20 000 being raised for starting chances in just one week.

For a guy who happens to be a trail runner and is preparing for the world championship in Slovenia in June, running 110km a day seems like an ideal week and a great way to log in training. While there were many highlights, there were also incredibly dark moments which started as early as the first night.

“Monday evening was the toughest drag up the mountain, it was cold and dark and the mist made it almost impossible to find the trail to the hut.”

A lingering cold did not help. “I had to overcome a battle in my head between what I knew I had to do and what I had committed to do.”

Spending nights around a campfire with friends kept his spirits high. When Mike de Haast, (an adventure enthusiast) together with Ray Fincham made their way to join the group and donated R5000 to Starting Chance on behalf of Pure Adventures; his message was spreading and the highs soared higher.

By Thursday night, Christiaan had adapted and had gotten a group of 10 people to give up luxuries for a night in the mountains. 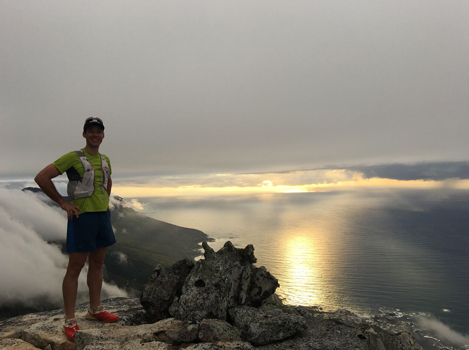 As he woke on Friday morning, it dawned on him that the challenge was now over “Every morning I saw the city from the top of the mountain and it gave me a Godly perspective about our everyday problems. Where one normally sits in traffic on your way to work, this view gave me the holistic picture of so many people stuck in traffic to live the life they did not dream about. This view changed my thinking and before I rushed down the trail to my office, I paused for a moment and sat down appreciating the things we take for granted every day”

Aside from raising awareness and R20 000 to help the next generation of South Africans have a starting chance; Christiaan Greyling left table mountain with a renewed sense of why he runs, and a new appreciation of what he has, especially his car. More than that, he discovered, like so many others, that the hidden treasure of doing something that goes beyond yourself is what you gain. Through giving you actually gain much more in life than what you have given.

To find out more about starting chances visit www.startingchance.org.za