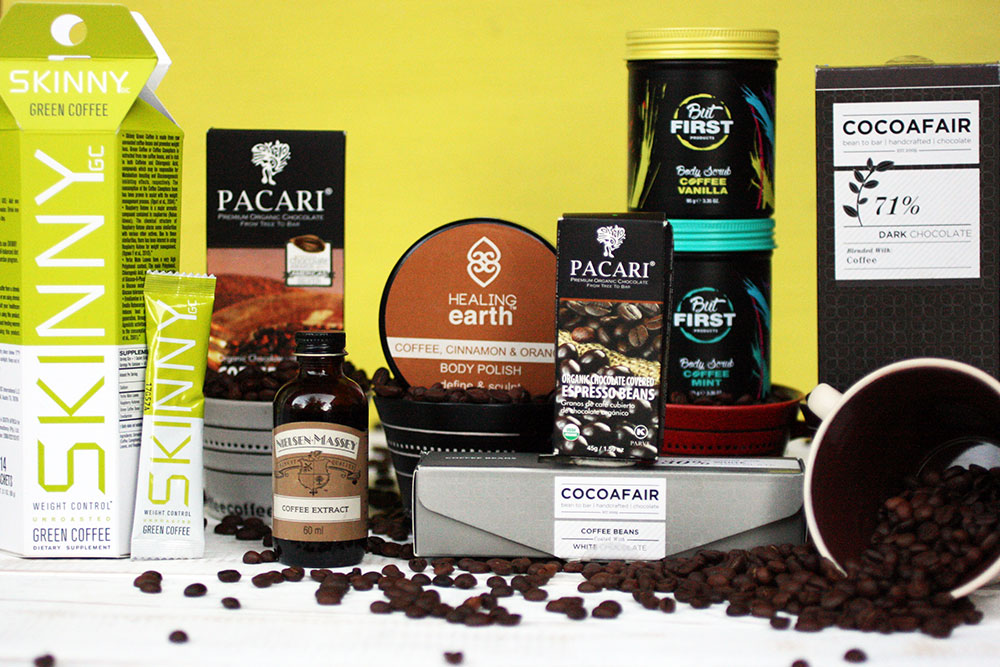 You get two broad groups of people. Those who can’t function without their morning (mid-morning and afternoon) coffee and those that get jittery after just one sip. I fall somewhere in between. I can do without it but I prefer not to do without, and the last time a cup of coffee gave me the jitters was years ago during a studying cram session that involved more than 5 cups of coffee.

I love the smell of coffee and the ritual of a morning cup and the promise it gives of that much needed energy boost. In search of products that aren’t coffee but utilise those precious beans, I found 6 gems that are a combination of edible and definitely not, but all give you that coffee kick without the cup. 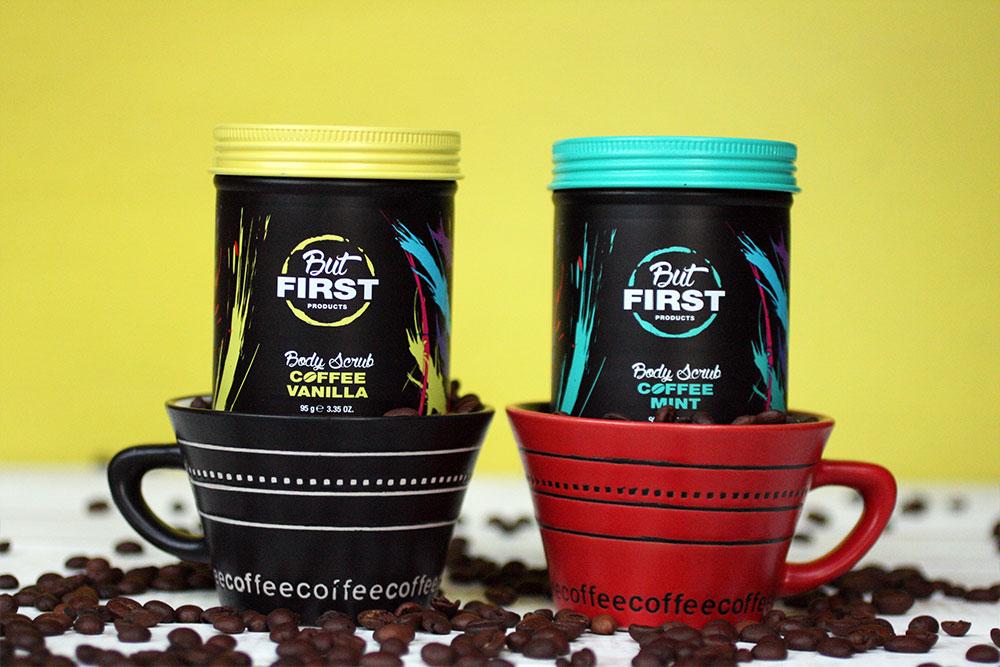 But First is an artistic beauty brand that believes beauty products should not only be functional but beautiful too. They also believe in waking up to the smell of coffee, which is where their two body scrubs come in. They’re both made with real coffee for a morning scrub that’s as refreshing as it is exfoliating.

The packaging is, as you’d expect from a beauty brand, quite beautiful. The tins are black with colourful splashes and coloured lids. They’re the type of container you know you’re going to repurpose and reuse one your scrub is finished.

When you open the tin, the whiff of coffee (coffee vanilla scrub) and mint (coffee mint scrub) is strong and smells like something you might find in the kitchen. Probably the reason they have a “not for consumption” sticker inside the lid.

I tried the coffee vanilla scrub first. It looks and smells like coffee grounds and is a really good rough exfoliator. It spreads surprising well as and rinses off without staining you. It does however turn your bath water brown, so unless you want to soak in a cup of coffee, I would suggest reserving it for the shower. It makes the entire bathroom smell like coffee which makes it perfect for an early morning jolt.  As I scrubbed before washing, I came out of the tub smelling like soap not coffee, but felt like I’d already had my first cup.

Next up I gave the coffee mint scrub a try. The smell of mint overpowers the coffee which is much milder. It has the same look and texture as the coffee vanilla scrub.  What I loved about this one is that the steam caused by the hot water together with the peppermint oil in the scrub created this really invigorating minty steam in the bathroom, which you can breathe in and makes you feel super fresh and clear. It also gives your skin a nice zingy feel. Once again, as I generally exfoliate before washing, I exited smelling like soap. 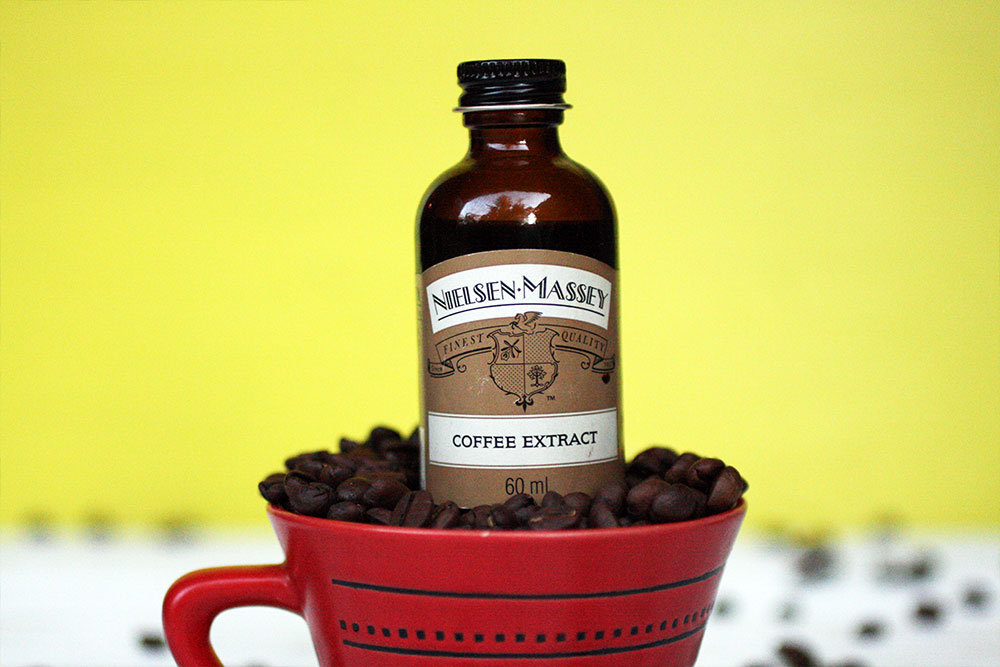 Nielsen Massey is a family company making vanilla extract since 1907 and they have an incredible range of pure extracts. Their products are organic and GMO free and come in the sweetest little bottles.

Vanilla extract is, in my opinion, the most important extract you can have if you like to bake. It gives everything from cookies to cake to ice cream an incredible flavour and there is a difference in smell and taste when using pure extracts as opposed to essences.

Extracts are an easy and fun one to flavour your baking and the Nielsen Massy Coffee extract is amazing. It’s the first coffee extract I’ve ever tried. It smells like Kahlua, which I happen to love, and adds a coffee vanilla flavour to whatever you put it in. Thus far I’ve tried it in homemade ice-cream and a batch of chocolate chip cookies and it added a subtle hint of coffee to them.  I imagine it would be amazing in brownies or anything chocolate flavoured. Coffee brings out the chocolate flavour (which is why you’ll see coffee added to chocolate cakes or cupcakes) so adding a bit of this to a brownie mixture would make it extra flavourful. 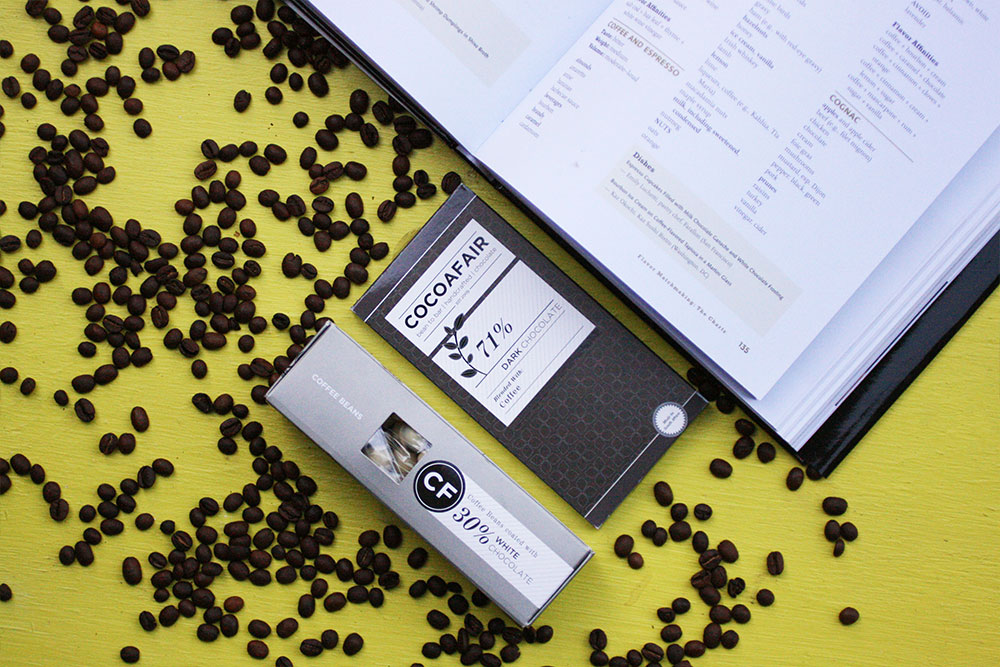 CocoaFair is a Cape Town based company that is the first company in South Africa to have a bean to bar chocolate facility. This means that that all their products are made locally on site from bean to the bar you buy. Their chocolates all have a delightfully artisanal look and feel. Amongst their chocolate offerings, which are all organic, palm oil free and include vegan, vegetarian and kosher options, are their white chocolate coated coffee beans. These beans are crunchy and have a bitter taste – much like coffee. The white chocolate adds a welcome sweetness that makes them feel like cappuccino wrapped around crunchy espresso. They reminded me of cacao nibs, so if you love that pure cacao bitterness, espresso and love milk in your coffee, you’ll love these coffee beans.

In addition, Cocoa Fair also makes a dark chocolate with coffee, which I prefer to the beans. It’s got that same crafted look and smooth feel as the rest of their chocolates but has a distinct coffee flavour. At 71%, it’s a dark chocolate and the coffee is blended in for a smooth texture. I found it to be the perfect thing to satisfy chocolate cravings, as a few squares hits the spot. 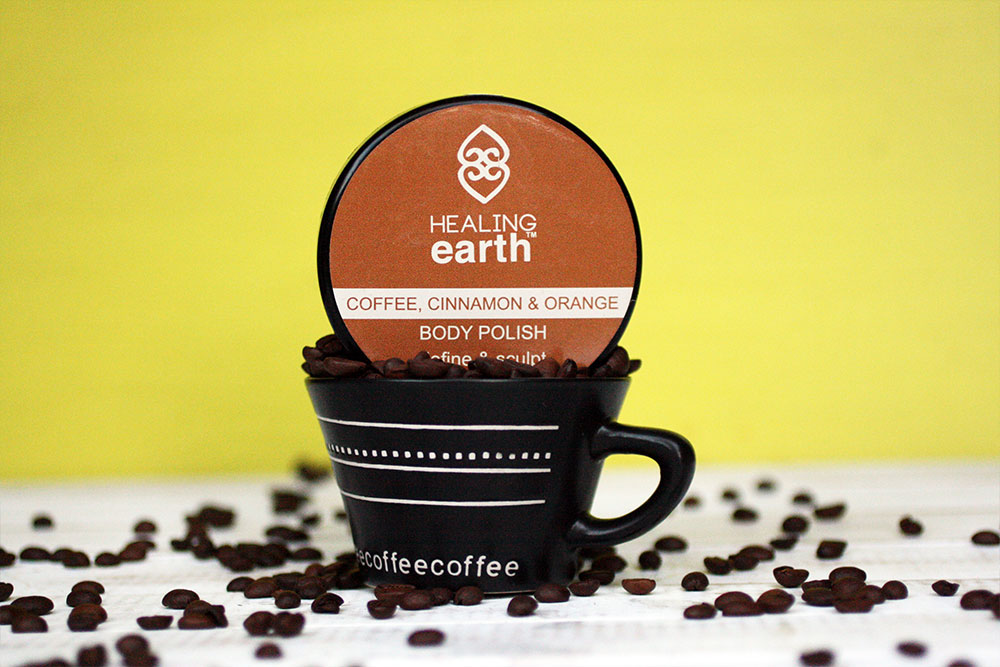 Healing Earth is a premium organic spa brand specialising in bath and body products. Not only are their products good for your body, they’re all made with the good of the environment in mind. Along with supporting local farmers and fair trade, their ingredients are non-GMO, free of preservatives and parabens and their products are packaged in recyclable packaging.

The coffee cinnamon and orange body polish is a cellulite-combatting body oil, polish, and cream, harnessing the smoothing and invigorating powers of coffee, cinnamon and orange. The coffee is almost undetectable with the strongest scent being cinnamon, that being said it smells delicious. It’s a gentle body exfoliator that has a creamy texture with little beads in it making it both an exfoliator and moisturizer.  As it’s not incredibly grainy it’s good to use in both the bath and the shower. Aside from leaving you smelling delicious it has a really nice moisturizing feel. 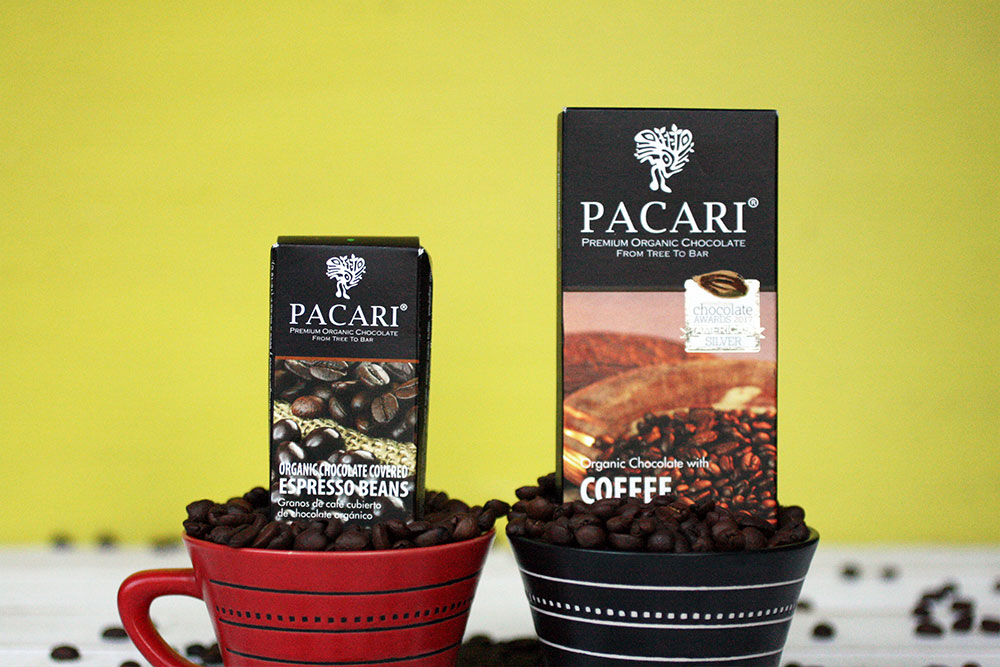 Pacari is a family owned company based on socially and environmentally friendly sustainable principles. It’s the first single origin chocolate made entirely in Equador. Their chocolates are organic and produced in small batches to highlight the flavour profile of the cacao bean.

First up I tried their Organic chocolate coffee bar. It’s a rich dark 60% chocolate bar which combines Ecuadorian Arriba Cacao and Ecuadorian coffee. Real espresso beans are ground up and added to the chocolate and this comes through not only in the taste which has that unmistakeable coffee kick but in the texture. The ground espresso beans give the bar a crunch. One of the things I loved about it aside from taste was the fact that it was dairy free, it’s hard to find a really good dark chocolate that is fully dairy free and this ticks that box.

The Picari Organic Dark Chocolate Covered Espresso Beans is pretty much what they sound like, coffee beans covered in a 60% dark chocolate layer. They’re similar to the Cacao Fair ones and have a crunchy and bitter taste from the coffee beans – the dark smooth chocolate coating offers a nice balance. Again, they remind me of cacao nibs and something only a true coffee addict would enjoy. 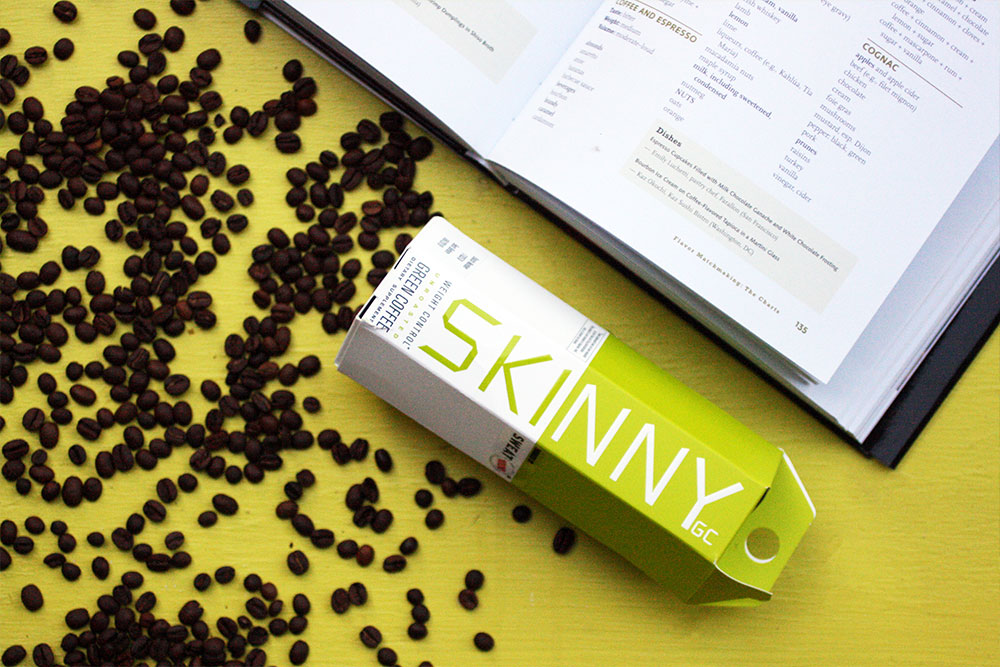 Skinny Green Coffee is made from raw unroasted coffee beans that are rich in both Caffeine and Chlorogenic Acid, which both have compounds that help boost the metabolism and inhibit fat absorption. It also contains a key compound called Evodiamine to speed up your metabolism which results in more calories being burned, Yerba Mate which is rich in anti-oxidants for an added energy boost, and Raspberry Ketone which reduces visceral fatty tissue and liver triglycerides. It is also endorsed by Sweat1000 and is vegan and palm oil free.

What surprised me most was the taste, it doesn’t taste like coffee. It has a raspberry undertone, most likely from the Raspberry Ketones. It also had a distinct un-coffee like smell.  Personally, I didn’t love that it doesn’t taste like coffee, it’s a weak drink taste wise – almost like a raspberry flavoured coffee tea. It would be a good choice for people who want the power of coffee without the coffee taste, alternatively you can add it to your coffee as some people do.

How to organise your wires

The Dyson Supersonic Hair Dryer: Is it worth the price?

Are Healing Teas worth their Price? We tried them out