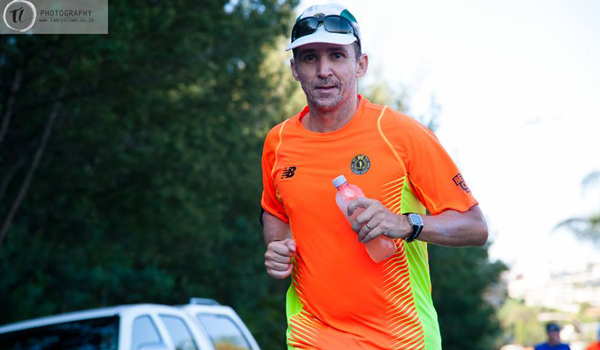 My road to Comrades was a long one that started mid-2013. I had been running for a couple of years and thought that I was ready to tackle The Ultimate Human Race, thanks to some peer pressure from fellow runners. I entered the Comrades Marathon 2014 and slogged away at the training, preparing myself for this mammoth race. After many months of training and acting like a complete jerk by avoiding sick people, I lined up with others in the CC charity batch. It was a down run – I liked downhills – I found very few downhills, especially in the first half. 30km into the race I was already behind my planned time. 60km into the race I was far behind my planned time. I crossed the finish line 1 minute 54 seconds after the final gun. I was gutted. I had failed!

Well 2015 was going to be my year! Or so I thought. Problem 1: It was an up run. Problem 2: I hated uphills. To add to my woes I started in G batch, which meant I had already lost over 6 minutes before I had even started the race. I passed halfway at just over 6 hours. By 50km I knew my race was over. I hobbled for 7km to the 57km mark where I missed the cut-off by too many minutes to mention. The Comrades Marathon 2015 was not to be. I had failed!

So why … why would I put myself through so much torture again and attempt The Ultimate Human Race for a third time after two Comrades failures? Throughout my life I have always found determination and perseverance to be my strong points. I have failed in a number of things over the years and have always beaten myself up about it if I never tried again. I had to try again!

I have to admit though that I had many, many doubts throughout my training for the Comrades Marathon 2016. Is this race really for me? Am I just not built for running such long distances? Why not just stick to parkruns? Even with all these doubts and questions I continued training. Some training runs were excellent and some were just fine, but a large number of them were really tough. I followed a programme put together by my work colleague and fellow runner, Matthias Kempgen. He knew how much I wanted that elusive medal, but also knew my weakness of picking up silly injuries, so the programme was geared towards shorter, quality runs as opposed to too much distance.

I once again started in the CC charity batch with just over 1150km mileage on my legs for 2016. Slightly more mileage than the previous two years, but more sensible mileage. My race started well and by 5km into the race I was 5 minutes ahead of schedule thanks to getting over the start line quickly and very little congestion. Even though all my running buddies (first Marco Josephs, then Mdu Ncube, Leon Botha, Paul Cosser, Silvano Pizzocaro, Peshen Reddy and Eugene Maritz) caught me and passed me I felt good. By halfway I was 2 minutes faster than my planned time and I still felt better than I had at my previous attempt at the down run. Things changed quite rapidly from the 59km mark; I did not feel so great anymore. I felt so bad that I never even saw my friend, Lisa Mackenzie, pass me. My pace started deteriorating rapidly and within 5km I had lost 10 minutes. For 20km I prayed (and I am not a religious person). It was only when I got to the last cut-off point with 7km to go that I was positive I had it in the bag. I still had work to do, but I knew the work was manageable as long as I continued to move forward. John McInroy, founder of Red Sock Fridays (#ShoOops) and Unogwaja, encouraged me to put my pain aside and focus on my goal. When I stepped onto the grass inside Sahara Kingsmead Cricket Stadium it felt like a weight had been lifted from my shoulders. I had conquered the Comrades Marathon 2016. I finished the race with minutes to spare in a time of 11 hours 56 minutes 41 seconds. The medal was mine! I had succeeded! 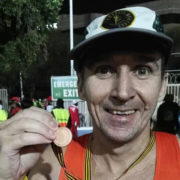 Grant is married to Zena and they have 1 adopted child and 2 biological children. Although Grant claims to have always hated running, apparently due to the harsh training he endured during his national service, he has gone on to run in excess of 70 half marathons, 10 marathons and 8 ultra marathons since he started actively running in 2010. Grant is an avid Red Socker and is your typical back-of-the-pack runner; normally finishing just within the cut-off time, taking the opportunity to chat to loads of people on the way and generally having fun. His best races times are 2 hours 3 minutes for a 21.1km, 3 hours 18 minutes for a 32km and 4 hours 31 minutes for a 42.2km. Grant managed to successfully complete the Comrades Marathon on his third attempt in 2016. He hopes to one day break 2 hours for a half marathon.