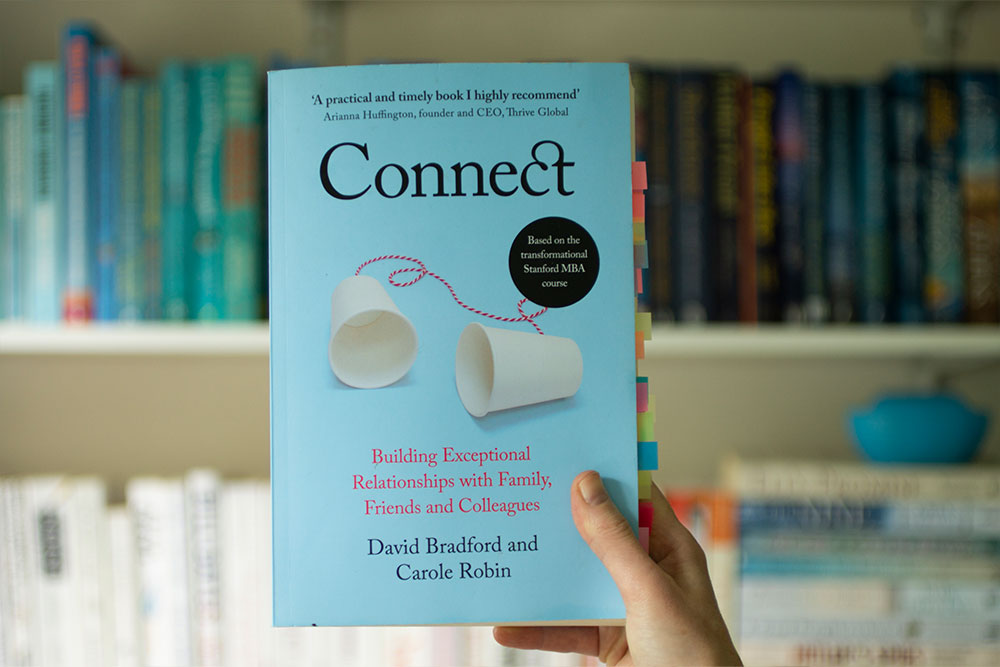 David Bradford and Carole Robin created Stanford’s business school’s most popular class called “interpersonal dynamics”. This book is said to be the ‘next best thing to taking it’.

Connect is a practical guidebook to help you build exceptional relationships with family, friends and colleagues.

The practical tips are broad ranged from setting boundaries, earning and restoring trust, and handling feedback and conflict. They are all delivered through storytelling relatable scenarios, which I always find most impactful in learning books.

This book is jam packed with actionable advice and is valuable for anyone looking to repair or build relationships. To give you a taster of what to expect, here are 5 of the best lessons I learned from Connect.

1. Stay on your side of the net

When giving feedback, staying on your side of the net means being specific about what you don’t like and how it makes you feel, rather than interpreting the other person’s motives or character.

Kids are surprisingly better at this than adults as they don’t yet know enough to assign a motive. Carole gave an example in which she overheard her young children playing. The 5-year-old said to the 7-year-old “That’s the third time you’ve picked the game and I don’t like that. I pick the next game or I’m not playing.” This is feedback that is specific and actionable.

2. Don’t Give Away Influence

3. Deal with pinches before they become crunches

A pinch is when something is bothering you but it’s easy to ignore because “it’s not a big deal”. Pinches aren’t major conflicts and some of them pass, but some get under your skin and grow into larger problems that they call a crunch.

Crunches are problematic because they blow things out of proportions and could be avoided. When you allow pinches to continue, they reinforce a negative story. Once we have developed a negative story, we have a tendency to selectively collect data, which they referred to as building a case that supports our view.

4. Don’t Wait to Give Feedback

“Feedback that is close in time to an event is especially impactful because it is fresh in both people’s minds.” When we wait to give feedback or to comment on behaviour that negatively affects you, the memory dims and becomes distorted from both ends.

Even though conflict can feel stressful and even dangerous, it can actually be helpful. Conflict can surface issues in a very direct way. It can bring out emotions, indicating what’s really going on so you know where others stand.”

Without conflict there can be no resolution, and without resolution you can’t build up again to something stronger.

They likened recovery and repair of relationships to the Japanese art form of fixing broken pottery called Kintsugi. This is done by mixing lacquer with powdered gold, silver, or platinum. The result is something that is fixed and now works, that doesn’t ignore what happened, but rather celebrates the history of the break and turns it into something beautiful.

Connect was published by Penguin Life, an Imprint of Penguin Random House. It is available online here

How to do an at home Lymphatic Drainage Routine