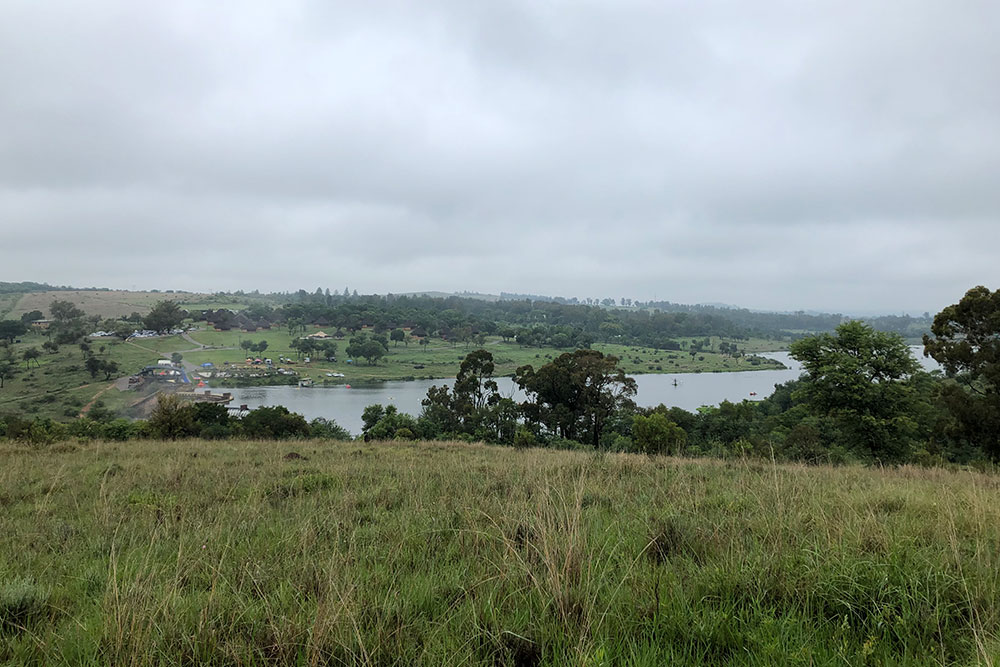 I think it’s the dormant endurance runner in me that looks at activities and wonders if I could maybe go a little further than before. After swimming a mile comfortably, I convinced myself I could do 3km swim. As soon as the weather got hotter, I found myself a 3km swim race and set that as my goal. I trained as a completely green swimmer would, swimming 3-4 times a week anywhere between 1-2.5km. I went mostly on feel, not my usual very thought out training plan. A week before the race, concerned about my lack of distance training I worked myself up to a 3km swim. I would recommend my training plan to no one.

As Murphy would have it, the week leading up to race was the coldest and wettest week I ever recall a December in Joburg being. We went from clear blue sunny skies with a high of 34C to grey cloudy skies that never stopped raining with lows of 13C. Like anyone with a race on the horizon, I frantically refreshed my weather app multiple times a day hoping to see a silver lining in the form of clear skies and higher temperatures. Nervous that the race would be called off due to bad weather I chose not to pre-enter, because what crazy people are going to swim in the rain in 16C weather? As it would turn out, it would be me, I’m that crazy person. On Saturday night, in an oddly cheery Facebook post, it was announced that the race would go on. The waters, they said, are calm and cool. Someone else joined the chatter and announced they reckoned the water was around 20C. I can confirm one should read Facebook posts with caution as the water was neither calm nor around 20C.

Only after I read that post did I decide that, aside from a touch of pre-race anxiety and the literal chills, I’d done the training and was feeling good. I woke up on Sunday morning to the gentle pitter patter of rain and pulled on my swimsuit along with sweatpants, a thermal vest and sweatshirt, and filled up my trusty hot water bottle. I was ready to brave the lake.

The lake, a good 40 minutes from home turned out to be just as grey and misty but the rain, it seemed, had stopped. After registering and reluctantly pulling off my layers I joined 64 other crazy brave swimmers to line up. I knew it was bad when the first swimmers started getting into the water and audibly gasped. It was freezing, like no-need-to-do-an-ice-bath-recovery-afterwards-freezing because it was ice cold.

Within the first 50 metres my goggles started leaking. Those who have been following my goggle diaries will know this is my third pair. Yes, I tested them. No, they did not leak during said tests. Yes, I was irate, which is not the mood you want to be 50 metres into a 3km swim. I tried to ignore the water filling up my goggles, imagining Michael Phelps who is said to have swam in leaky goggles as practice just in case that happened in a race. But this is a lake, not a pool you can count strokes to determine your distance and I needed to see where I was going. Also, who am I kidding, I am a recreational swimmer and my comfort and enjoyment is key.  I stopped 20 times to get water out of my goggles in the first 15 minutes, almost losing a contact lens in the process.

The thing about having to stop in a swimming race is that there’s nothing to hold onto and it’s not a rest, you may appear still above water but underneath your legs are frantically kicking to keep you from sinking. Eventually I managed to jam them onto my face so hard I could literally feel the goggle when I blinked, but it was no longer leaking so I chose my battle and afterwards had the ring marks to show. By this time, I was now in the back of the pack and exhausted. I had barely covered 500m. Nonetheless I was there to swim and swim I would.

At every race prior, I always found myself in the middle of the pack surrounded by swimmers. Here I was at the back, alone, no one to either side of me and those in front barely visible. On the one hand it was nice to swim without being kicked and punched. On the other, realising you’re so far behind everyone else is quite the hard pill to swallow. With no swimmers around me, I found myself fighting the current left by the lifeguard speedboat whizzing by and wondered if I was being washed away. I have a habit of swimming in a crooked line and so  to make sure I was headed the right direction I had to pause every so often and wink so that my right eye, whose goggle had yet to fog up, could make out the bright orange buoys bobbing away in the distance. I was asked three times if I was ok. The third time I yelled “I’m FINE!!!”. More to convince myself than them.

And then I started the motivational self-talk. You know it’s a bad day when you need to bring out the mental pep rally. But here I was in frigid water, covered in goose bumps and battling to move forward fast enough. First, I had a chat to myself about what a win would be. I was in the middle of reading Jenson Button’s latest book – How to be an F1 Driver. Oh, you don’t know how that could be connected to swimming? Humour me. Button explained how teams outside of the top 3 must decide how they’ll define winning and losing, because they know they’re not getting a podium finish. Often winning becomes doing better than expected and losing doing worse.

I went into the race with 2 goals

Alone in the dam with no one around me, I was convinced I was dead last, so I tossed goal 2. As I saw people being pulled out the water, I decided that for me a win would be to finish. Alone. Without needing to call the lifeguards over to boat me to shore. And that’s what I focused on – just finishing.

As in most swimming races I thought of my father and how ecstatic he was when I announced I wanted to get into open water swimming and how after the first race we did he kept saying how proud he was that we just jumped in and did something that scared us. I wondered if he’d say that now too, or if he’d look at the grey skies and at my shivering body and say “silly child, only fish should be swimming in weather like this”. Much like he said “running is for horses, not humans” after I got sunstroke after my first ultra-marathon.

The thing is I like finishing what I start, and I had set out to swim 3km, so barring disaster I was swimming 3km. The second half felt better than the first, namely because I wasn’t trying to get water out my goggles. It was then quite shocking to me to find out I had been a good 4 minutes slower in the second half. After one hour and 16 minutes I swam through the finish line and stumbled up the blue carpet to the announcer announcing my arrival. I thought it was weird that he didn’t add “and we have the last swimmer in the 3km” because I could see no one behind me. I was part relieved and part hurt that my sheer grit of finishing last wasn’t acknowledged. Turns out I was 4th last, so goal 2 was achieved!

Shivering, I stumbled up the carpet with less coordination than a drunk and could barely talk through my chattering teeth. My sisters asked if I was crying. No, I replied, I’m trying to breathe. The lady handing out the medals pretended not to notice my state and asked if I would be swimming again – you know in the next race happening less than an hour later. No, I stammered and offered her my wrists to pull of the timing bands because my hands could no longer work.

At the end of that harrowing 1 hour and 16 minutes I got a bottle of water, a medal, a stiff neck, sore arms and the worst post-race pictures I’ve ever taken. But, I also got that deep satisfaction knowing that I hit my goals of finishing a 3km swimming race and not coming in last. And that, is priceless. 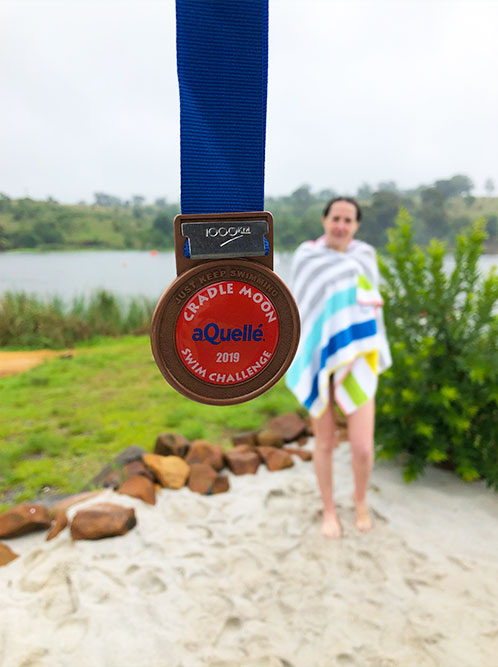 Will I be back? Of course, but next year I’m doing things differently;

1. Train better – I’m planning on doing more swimming and going up to 4km in a pool. Open water swimming is a lot more tiring and your body feels heavier than in the pool. I think practicing longer pool swims will help with endurance. In that vein I’ll probably add some speed drills to improve pace.

3. Take a cue from the weather – I‘m not built for cold swimming. I’m the person who won’t go into an outdoor pool unless its 25C and the sun is shining. Swimming in 16C weather in a dam that feels below 10C just makes an already challenging swim that much harder.

4. Get new goggles. I’m still in search of my perfect pair of goggles. All I ask for, is a pair that in reality doesn’t leak and fog, not ones that just say they don’t.

How we Swim Proof Our Hair