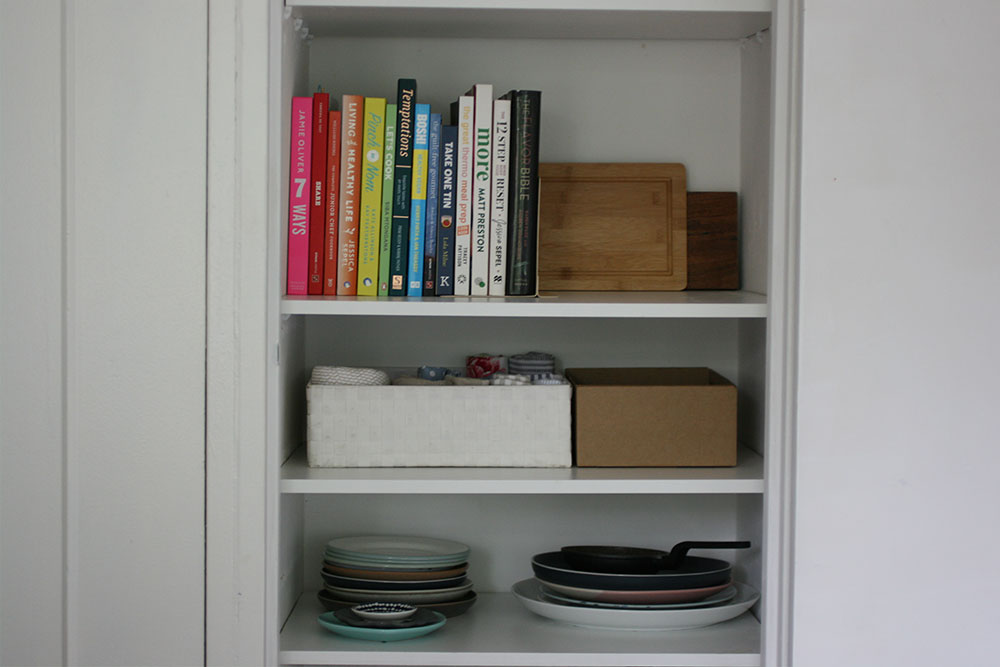 We spent December 2019 redoing our home office and creating an environment that was a functional workspace and one we were excited to be in. Our timing was impeccable. When staying at home 24/7 became mandatory, we were fully set up to be able to work comfortably in a space dedicated just to working hours. The renovation is still a work in progress, which is why we have not yet shared it fully. We have done it bit by bit; and this past December (2020) we decided to tackle another area: one of the built-in cupboards. We wanted to give it a DIY cupboard makeover. It’s an old cupboard that had three shelves and four clunky drawers. We wanted to better use that space as a cupboard to store our food photography props and other items that had been cluttering up our bookshelf. We wanted more shelves that were spaced closer together in height and no drawers. The thinking being, not only can you store more, you don’t land up having huge piles of things which means it becomes easier to keep things neat, see what you have and there’s less load bearing weight per shelf.

The plan was to rip out the shelves and drawers, repaint the shell and install new shelves. It was a relatively simple and inexpensive project that took us 3 days (out of which only one was a full day of work). The result is a cupboard that looks brand new, is more functional and an office that is less cluttered.

Below is how we did our DIY cupboard makeover including costing, materials, tools and lessons learnt.

How we Did Our DIY Cupboard Makeover

The first thing we did was measure the cupboard, decide how many shelves we needed based on their height placement, so we could work out what we needed to buy. There were a few shelves we wanted at specific heights. These were shelves on which we knew we were keeping either storage baskets or tall items and needed to make sure they would fit comfortably. Those were worked out first and then the remainder were calculated based on height left. We divided the remaining space equally. We also sketched a rough outline of which shelves would go where, depending on how we would use the items i.e., big storage basket at the bottom. Once we worked that out, we were ready to shop. In measuring the shelves, we realised how unevenly the cupboard was built. Apparently, no house is perfectly square, and a small built-in cupboard is no exception. When we purchased the shelving, we got each shelf cut to the longest measured width (we took these measurements in 3 places; front, middle and back) and then we trimmed each to size as we fitted.

Next, we had to rip out the inside of the existing cupboard. Destruction is always easier and quicker than creation and this took about an hour. We were originally going to reuse the three shelves, but they were attached to the sides with nails. Being made from chipboard, removing them took a chunk out of the bottom of each rendering them unusable.

Ripping the frame from the cupboard left holes in the wall, that needed to be puttied and sanded before painting. This was a quick job and we left the putty overnight to dry completely before sanding it smooth and painting.

We painted the inside of the cupboard white, because it is a cupboard, and we wanted it to look bright. We also had some leftover white paint from painting the office which we wanted to finish. Our motto is to always use what we have before buying anything new. We did two coats on the inside shell as well as on the inside of the door (the outside of the door was already painted). Each coat took under an hour as it’s a small space. This was done on one day, leaving time between coats and waiting overnight for it to completely dry before installing shelves.

This was the hardest and longest part of the DIY cupboard makeover. Largely due to the walls inside the cupboard being not even remotely straight or level. Each shelf had to be measured according to where it was going to sit in the cupboard and then trimmed to size. When I say the walls were not straight, I mean not only is each shelf a different width but each shelf is not a perfect rectangle – they had to be trimmed at an angle to fit in the space.

We started at the bottom, measuring each shelf only once the one below it was installed. This gave us a level surface to mark the position of the next shelf. This is something we learned from putting up our bookshelves. Measuring shelves one by one, fitting them and ensuring they’re level before going to the next makes it is easier to ensure each shelf is at the correct height and level. It’s also easier to correct one shelf than to realise at the end you went wrong.

Much like how we decided what sized shelves we needed, to cut them to size we again measured the available width in three places. This had to be done for each shelf separately, as the widths varied at different heights too. The space tended to be smaller at the back and bigger at the front. We then marked the revised dimensions on the shelf and used a jigsaw to cut the board.

If this sounds straight forward, it was not – we had to trim each shelf at least three times before it fit perfectly into the cupboard. The wall was not merely skew, it was waved. Once we had the shelf trimmed to size, we used a level to make sure the shelf was sitting level and with the shelf sitting in place, we marked four holes under the shelves on each side for the shelf holders to be inserted into. Those holes were then drilled, the shelf holders inserted, and the shelf installed.

One of the sides of the cupboard is chipboard and the other is brickwork with a layer of cement covering it. Shelf holders are intended for chipboard/wood and thus fit into chipboard/wood securely. They don’t hold in a cemented wall, you’d normally need a wall plug for this, but because the metal insert bit of the shelf holders are so short, we used putty to secure them. We did this by putting putty at the end of the shelf holders and sticking them into the wall, wiping away any excess. It hardens and keeps them from falling. It’s been two weeks and they’re still holding up.

This process was continued until all seven shelves were installed. This part took us two days. It would have been one day, but our shelf shopping calculations were based on reusing the old shelves so a second trip to the hardware store delayed us.

Because this was a makeover, repacking the cupboard was an important element. Anytime you need to empty a cupboard and then repack it is a good excuse to go through what’s in the cupboard and toss what you don’t need. We did this and got rid of things that were taking up space and creating clutter.

Now everything in the cupboard is something we use and everything has a designated space. Since reading the Life changing Manga of Tidying up, we’ve taken Marie Kondo’s tip of not to buy organisational items (trays and baskets and containers) and rather use what you have to start. For this cupboard we only used a tray and basket that we already had and made use of an upcycled cardboard box, resisting the urge to buy a shiny new box.

The total cost of this DIY cupboard makeover is shared below and split into what we bought and what we already had. We had paint, brushes and Polyfilla. We also had all the tools we needed and those are not included in the total cost of the project. We spent R422, but the total cost (should we have had to purchase the materials we had) would have been R833.

The Tools We Used

1. Anything built into a home will not be square. So, measure everything and do it twice.

2. If you need putty for a small area or a few holes, purchase the powdered putty you add water to and not the wet putty in a tub. The wet putty will dry out, so unless you use all of it you’ll end up wasting what you don’t use. The dry putty can last years and it’s easy to add water a mix it into a paste as needed.

3. You will have to go to the hardware store at least twice no matter how organised you are and how many lists you make. There is always something you miss or something that crops up. In this case, we planned on using three of the old shelves and repainting them to match the others. Once they were ripped out the damage was too bad, and it made more sense to buy extra ones than trying to repair and paint those. When planning and deciding what to reuse, think logically. i.e. ripping out before purchasing will reveal things you need that you made not have thought about and will determine if what you thought was reusable actually is.

4. When installing shelves, measure and install them one at a time. Get one perfectly level and then measure the next one based on your levelled one. Do not measure them according to the floor or ceiling, they are likely not perfectly straight.

5. When choosing a depth for your shelves, if possible, use a standard board size. This means you’ll only need to cut sides to fit and the front edge (which comes pre edged) can face forward. We chose a 455mm deep melamine board and luckily this dimension worked all the way through. If you’re doing this make sure you mark your cut-to fit dimensions according to what faces front. 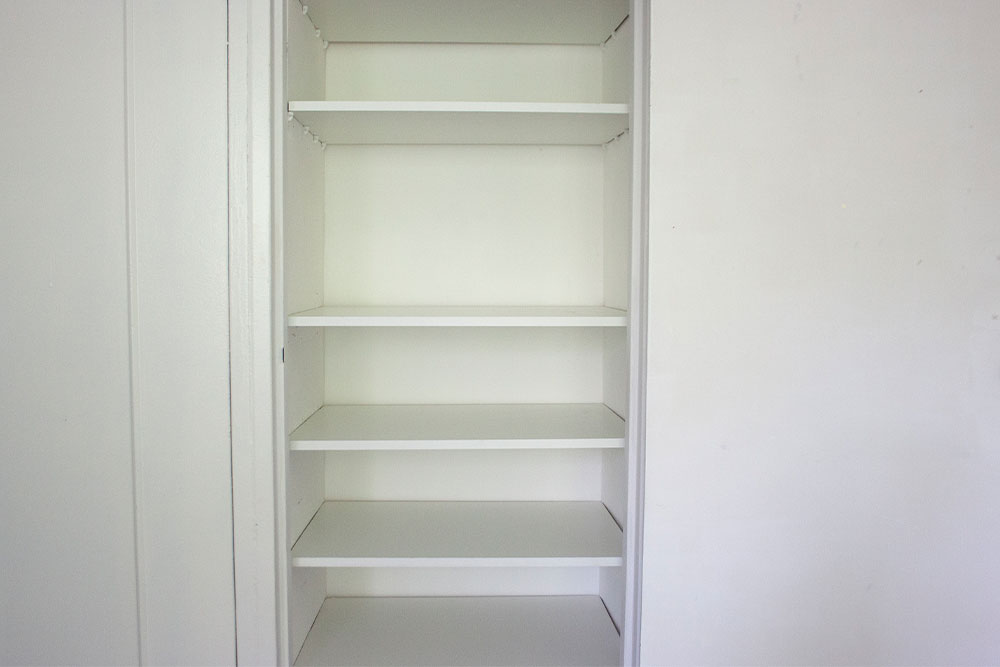