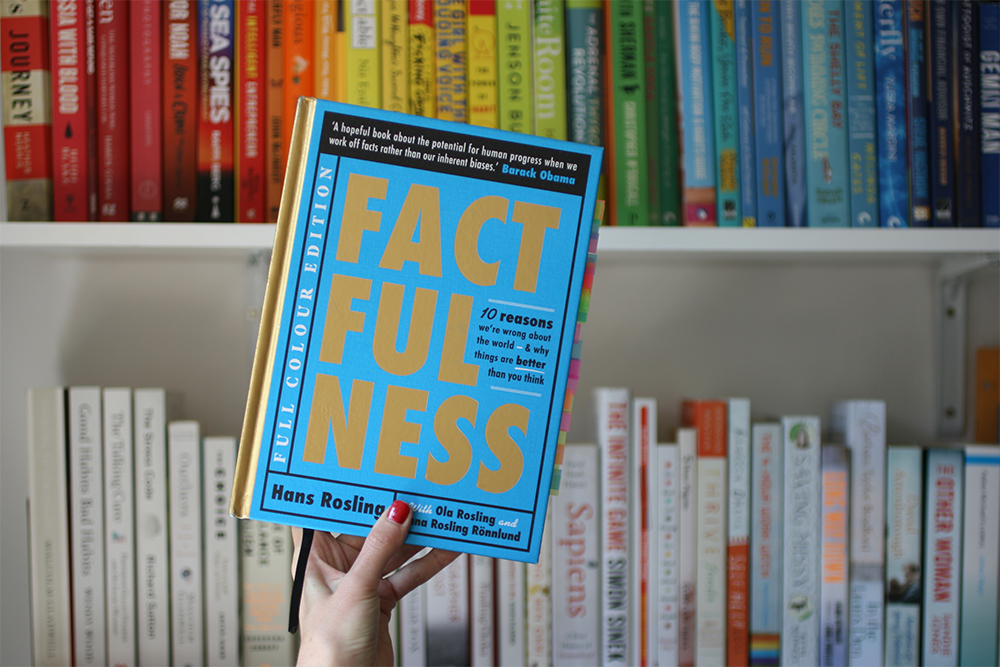 Factfulness by Hans Rosling, who has been described as a Global health expert and data visionary, was written as a collaborative project with his son and daughter-in-law, Ola and Anna. Simply put it is one of the most powerful books I have ever read.

In this book Hans, a Swedish Physician, academic and public speaker who was the professor of International Health at Karolinska Institute and the co-founder and chairman of the Gapminder Foundation sets out to teach us how to view the world and the events in it with Factfulness. By uncovering and explaining the ten instincts that lead us to develop our worldview, he teaches us how to overcome being amongst other things, overly fearful, negative and dramatic.

In full transparency, I have had this book review on my to do list for weeks and every time I opened a blank document, I found myself at a loss of how to review it. This book is intensely profound, and Hans Rosling was a brilliant writer. It is filled with so many great lessons on thinking and powerful quotes that I felt a huge amount of pressure to create a review that lives up to the book and accurately represents it. What stood out the most to me is how a book based on data and facts, things that you would expect to be boring stiff reading, was anything but. Hans injected vivacity into every page, creating a factful book with so much vibrancy that it was a joy to read.

I started reading this earlier this year, at a time that felt like the beginning of COVID-19’s hold on the world. South Africa had just announced its hard lockdown and as I turned the pages, reading things like the below sent chills down my spine.

In 1918 the Spanish flu killed around 2.7 percent of the world population. The risk of an outbreak of a flu against which we have no vaccine remains a constant threat, which we should all take extremely seriously.

As the weeks went by, the world seemed to get crazier. Things that have never happened in my lifetime were happening, things I had never worried about became my greatest concern and the future had never seemed as uncertain. But no matter what cropped up in the world around me, Factfulness was front of mind. For every conversation I had, news headline I read, or sales phone call I received, a lesson that Hans delivered in Factfulness popped up in my mind.

When sales agents called with their fear-tactic-hard-sells, I knew they were trying to trigger my urgency instinct. I back referenced to the Urgency Instinct Chapter, where Hans explains;

You have probably heard something like this before, from a salesperson or an activist. Both use a lot of the same techniques: “Act Now, or lose the chance forever.” They are deliberately triggering your urgency instinct. The call to action makes you think less critically, decide more quickly, and act now. Relax. Its almost never true. It’s almost never that urgent, and it’s almost never an either/ or… when people tell me we must act now, it makes me hesitate. In most cases, they are just trying to stop me from thinking clearly.

When I heard of anti-vacs, I immediately thought of Han’s vaccination mention when discussing critical thinking.

In a devastating example of critical thinking gone bad, highly educated, deeply caring parents avoid the vaccinations that would protect their children from killer diseases. I love critical thinking and I admire skepticism, but only within a framework that respects the evidence.

When I opened any form of media and read all the very loud noise, Han’s voice was louder.

“Forming your worldview by relying on the media would be like forming your view about me by looking only at a picture of my foot. Sure, my foot is part of me, but it’s a pretty ugly part. I have better parts. My arms are unremarkable but quite fine. My face is OK. It isn’t that the picture of my foot is deliberately lying about me. But it isn’t showing you the whole of me.”

When a family member expressed their fear of the state of the world right now, I told them to read Factfulness, because Han’s words were once again front of mind.

I started quoting and referencing this book so often that I realised that overthinking how to share, to the extent that it was preventing me to share, would be a disservice to Hans’s mission. He said;

“This book is my very last battle in my lifelong mission to fight devastating global ignorance. It is my last attempt to make an impact on the world: to change people’s ways of thinking, calm their irrational fears, and redirect their energies into constructive activities…”

This book was indeed his last battle, as Anna and Ola shared in the personal Outro. “On the evening of February 2, 2017, Han’s health suddenly deteriorated. An ambulance was called and, and into it Hans took printed copied of several chapters of the latest draft, his scribbled notes all over them. Four days later, in the early hours of Tuesday, February 7, Hans Died.” When I read that, I didn’t know he had died and throughout the book my thoughts had been, I wonder what he is saying about COVID-19. My father died almost to the day a year later and reading their words, I couldn’t help drawing on my own feelings of devastating loss.

At a time when the world seems so scary and uncertain, this book is like a comforting hug. There isn’t a wrong or better time to read this book, but, and I swear I’m not trying to trigger your urgency instinct, I believe there has never been a more important time than now to read this book, take in all its wisdom, learn and grow.