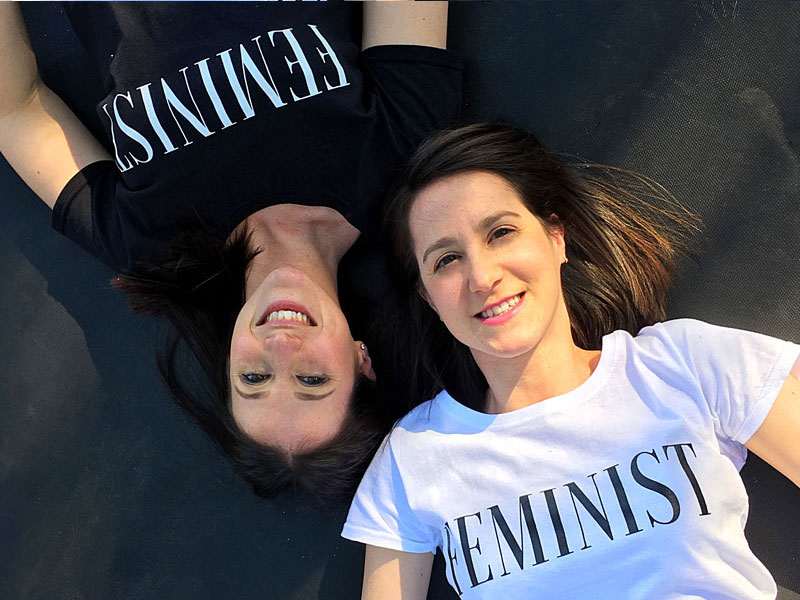 A feminist is defined as a person who supports feminism, which is defined as “the theory of the political, economic, and social equality of the sexes” or “organized activity on behalf of women’s rights and interests”.

2017 has seen the word feminist and its associated phrases – “nasty women”, “girl boss” “the future is female” – become a hot commercial commodity and in many cases associated with an extreme form of feminism.

Enter Nicole Jowett, who saw the power of the word “feminist”, defined it for herself and used it to create an organization that has raised upwards of R10 000 for a local women’s shelter providing abused and battered women and children with shelter, safety, and hope.

Nicole literally turned the word feminist into a commercial garment that allows the buyer get involved in “organized activity on behalf of women’s rights and interests” aka feminism.

We recently caught up with Nicole, to find out more about the t-shirts for change project and the meaning of this bold word.

What is T-shirts for change?

T-shirts for Change is an initiative I started that aims to raise funds for charities by selling custom slogan tees and apparel.   T-shirts for Change has so far raised R10 000 + for The Frida Hartley Women’s Shelter through the sale of the feminist t-shirt and other FEMINIST apparel for the #FeministTeeProject.

I hope to create more custom slogan tees and campaigns for different causes under the T-shirts for Change brand.

What gave you the inspiration to start T-shirts for Change?

I originally wanted a FEMINIST t-shirt because I saw one on Pinterest and thought it was cool and relevant to me and my beliefs.  I looked high and low for one online and in stores and couldn’t find it anywhere.  So I printed 10, one for myself and the rest for my friends.  The feminist t-shirt was so popular that I had to print more, and it was a passing comment from a friend that made me think that a bold word like ‘Feminist” should have a campaign behind it.

I thought to myself, what if this t-shirt could be more than just a bold word – but a bold campaign.  And so it seemed like a no-brainer to donate R100 from every t-shirt sold to a women’s charity, making the word on the t-shirt mean so much more.

I think slogan t-shirts are very trendy at the moment, and t-shirts will always be a wardrobe staple. However, I have added the FEMINIST sweatshirt and will be launching vests and swimsuits in summer to stay relevant to the season and trends.

Why the word feminist?

I think the word Feminist has a bad rap, I consider myself a Feminist and it should be a good thing to be a Feminist, and so I wanted to wear this and own it.  That’s why part of the campaign is to post a picture in the Feminist tee and wear it with pride!  Not only does the sale of the t-shirt raise money for women, but more than that every woman and man who wears the Feminist tee is helping to break the stigmas around the word.

I think it’s important to get across that there is Feminism and then there is radicalized Feminism, and almost anything can be radicalized.  I think with all things, the minute it becomes radicalized the message is lost.  Feminism can be both about a woman’s right to walk down the street without being catcalled (a very first world problem) and a woman’s right to not be abused at home or forced into marriage at age 13 and have access to feminine hygiene products.  Both are valid and both are real, but in the South African context, things like domestic violence are the most critical.  This also doesn’t make the challenges faced by the modern feminist like corporate pay gaps and blatant exploitation by brands with pink products being more expensive than blue products any less valid.

There is nothing radical about wanting girls to not be forced into marriage at age 13 or a wife not be beaten by her husband.  The most important part is that the person wearing the FEMINIST tee has made a real difference with the donation and so whatever the arguments around the word itself may be, we can’t let the stigma around the word distract from that.   Not every Feminist is a radical Feminist, just as every vegan doesn’t have to be a radical vegan and every Christian doesn’t have to be the stereotypical bible basher.

What does “feminist” mean to you?

For me, being a modern feminist means that I believe in women’s rights on all levels including the most basic.   From radical issues like child marriage, to pay gaps, domestic violence, and even economic abuse.  It has nothing to do with man hating, or catch phrases like “mansplaining” – being a feminist is about the real and dangerous discrimination and abuse that women worldwide face day to day based on their gender.

What is the Frida Hartley Shelter for Woman and why did you choose them as the recipient of donations raised through the sale of the Feminist T-shirts?

The Frida Hartley Shelter for Destitute Women and Children is a shelter based in Yeoville.  They provide a safe home for homeless women and children, the women who stay with them are provided 3 meals a day, trauma counseling, career counseling and skills development, domestic violence counseling, parenting workshops, and even job placement to help homeless women or women from abusive relationships get back on their feet.  I chose them because I think this is the most REAL issue facing women in South Africa, I think the ultimate empowerment for a woman is education and independence and Frida Hartley provides these for women.

More information can be found on their website:  http://www.fridahartley.org

What’s next for T-shirts for Change?

I am working on some new custom slogans, but I can’t say anything yet!

A Guide to Microblading in South Africa