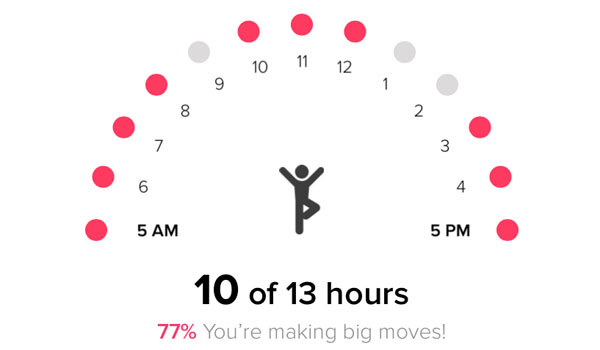 You don’t really think about how many steps you’re taking per day until you get a fitness tracker or pedometer. Then you become obsessed with a number and that number most frequently is 10000.

Thanks to a (very) successful marketing campaign by a group of Japanese pedometer sellers, 10000 steps has become the daily step target of the majority of fitness trackers. This number has been confirmed by medical authorities as a healthy number to aim for. 10 000 steps also equates to roughly 30 minutes of daily activity. The amount recommended to reduce your risk of disease, and to help you live a healthier and longer life.

This all sounds very do-able especially when you’re already active. Or so you think. The startling thing about wearing a tracker, in my case a Fitbit, is that you realise just how little you actually move during the day.

Most active people schedule in exercise, be it a gym session, run, walk, yoga or spinning class, in the morning or evening. Our days are spent largely behind a desk or in a sitting position working.  Nights are spent presumably at home or out socialising, but often in sedentary positions, after all – you want to unwind. Unless your chosen exercise that day was a run or walk or you had errands to do which required walking, you can easily get to bedtime without tracking that golden number – 10000 steps. This in spite of doing 30 minutes, or more, of some type of exercise.

I’ve been there. Days where I both went to gym and ran, far exceeding the recommended 30 minutes of exercise, only to get to bed and discover I haven’t even tracked 10000 steps.

Weird things start happening when you start tracking numbers. Especially when you tend to get obsessed with numbers, charts, and seeing the word GOAL vibrate on your wrist…

You learn how many steps a walk around the block will earn you.

You learn that Fitbit tracks arm movements which explains why you wake up having done 100 steps without having gotten out of bed yet.

You start power walking, arms swinging wildly, to make sure you’re getting all those steps.

On occasion you wave your hands around, not bothering to get up, amused by the fact that you’re tracking steps.

You get out of bed to pace up and down your bedroom to hit your goal before midnight.

You learn that walking 5km yields more steps than running 5km because your strides are shorter. This leads to mixed feeling about speed runs. You want to get fast, but you also want more steps.

You pace in place as you wait at a till. No time is wasted if the steps are tracked.

You refuse to get up while your fitbit is charging. If a step is walked without it being tracked, was it even walked?

And then, at some point, most likely while sitting in traffic darting your Fitbit wearing hand to and fro, you start to wonder:

Is the concept of 10000 steps making you healthier or just loonier?

The purpose of fitness trackers like Fitbit is to get you to sit less and move more throughout the day. Instead of having chunks of time where you’re essentially sitting in one place, you should be getting up regularly and moving.  Sitting, we know is bad for you. Prolonged sitting is linked to colon cancer, Type 2 Diabetes and heart disease.

Fitbit’s latest feature – hourly tracking is meant to encourage users (most of whom spent large chunks of time inactive) to get up and move every hour. The app suggests 250 steps per hour and you can check in throughout the day to see which hours you hit 250 + steps and which you were inactive. As you reach 250+ steps the grey hour circles turn red. As you spend more hours moving, your stationary patterns come down.

I’ve been using this feature for a few days. Although there’s no reminder to your phone or the wrist (on your wrist would be a huge plus!), it has made me get up and walk around for a few minutes every hour. This gives your mind and eyes a much needed break from staring at a screen which can also help increase your productivity.

The down side to this new feature? Fitbit has given us a new goal to obsess over.

Now if you’ll excuse me, I need to get up and pace, there’s this grey dot and I need to make it red.

*This article is based on my use of the Charge HR Fitbit Tracker & Fitbit for iOS app.

Previous Article
Food, In the Kitchen

Why the Nike+ Training Club is the best budget app

What you should know before downloading fitness apps

The best Apps to keep you organised in 2017