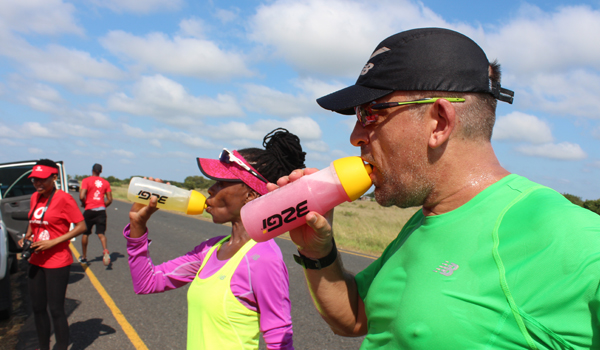 Phindi Gule and Kevin Burley spent their April running a total of 900km non-stop for 30 days. They did it for their documentary ‘Run KZN with Us’ and charity initiative in aid of the LIV Village. At the end of the 30 days, not only did they both come out with no serious injuries but they were back running within days.

They were able to run 30km for 30 consecutive days through planning and providing for their body’s needs. One of these was taking in the correct the correct fuel for multi-stage events.

Just like a car needs the correct petrol, water and oil to run, so do we. With the help of the Prime Human Performance Institute at Moses Mabida stadium and 32Gi’s range of products, they were able to get their fuel strategy on point.

“Each run was split into 3km segments where we would stop and take our sports supplements. We used 32Gi, which worked incredibly well for us, both as a Carbohydrate, rehydration and Protein supplement.”

By taking in the necessary energy during runs and getting protein in immediately after finishing each day, they didn’t even have to change their already healthy diets.

“It was difficult in the North of KZN finding fresh fruit and vegetables. We also went a few days with no food due to the stores/restaurants being closed (Sundays).”

Despite this and the energy expenditure toll that running 900km had on their bodies, by fuelling correctly over the duration, their bodies remained robust.

Phindi lost 2kg during the month and Kevin lost 3kg, and that is running 30kms every day.

Phindi and Kevin didn’t just show the world KZN and the great work that the LIV Village does. They were also able to bring forth a very important lesson on looking after your body, no matter what activity you do.

“We have one body and one life, so use it well. Treat your body with the respect it deserves. Many people take better care of their cars than they do they bodies. If you want to live a healthier life, do it bit by bit and set yourself realistic goals. Don’t expect to go from doing no exercise to running a 10km run in a month. Likewise don’t expect to lose 3kg in a month. Have a purpose for getting healthier – don’t just do it because somebody is telling you to.”

RELATED: Run KZN With Us

RELATED: Preparing for an Ultra Adventure 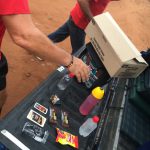 On the 30th of April 2016, Phindi Gule and Kevin Burley made history. They became the first people to run the length of KwaZulu-Natal. They ran a total of 900km non-stop for 30 days in aid of the LIV Village  and over the next month we are uncovering the Body, Mind and Life aspects of their endeavour.

The Do’s and Don’ts of Sports Nutrition

Using the power of your mind to get through tough times