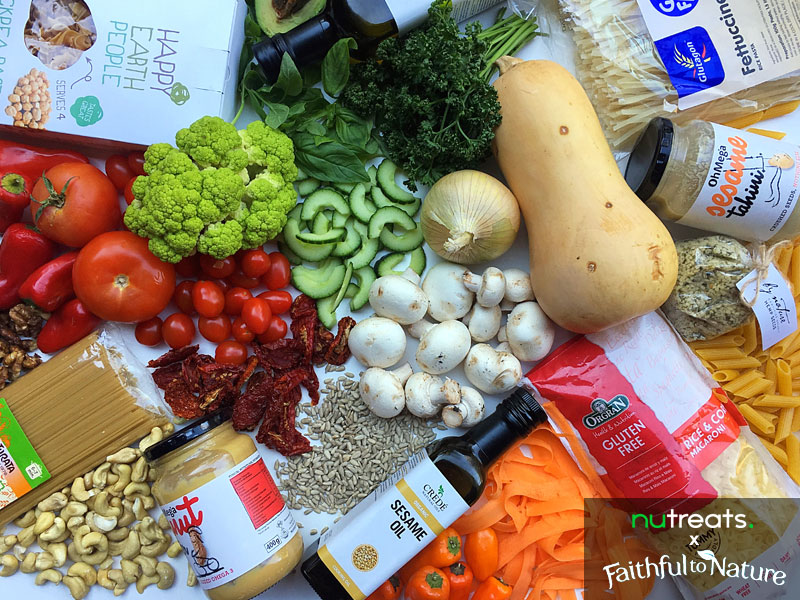 To take the guesswork out of selecting between quinoa and rice pasta and determining just how to cook them, eat them and if they taste like, well pasta. We partnered with our favourite one-stop online organic health store Faithful to Nature  which stocks a huge range of gluten-free pastas made out of just about everything but wheat flour.

Braving the world of carbohydrates, sans gluten, we pulled on our stretchiest pants and settled in for some serious carbo-loaded research. We’ve graded pastas based on ingredients (no to items we couldn’t pronounce), price, taste and texture.

What we’ve ended up with is the ultimate guide to finding the best gluten-free pastas for you, complete with recipes because pasta eaten naked is just well…sad 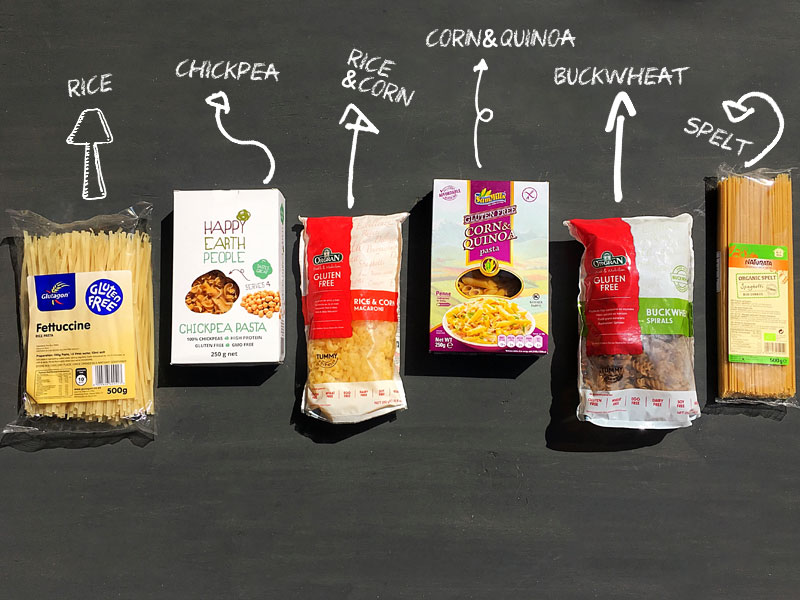 Price: R63 at Faithful to Nature 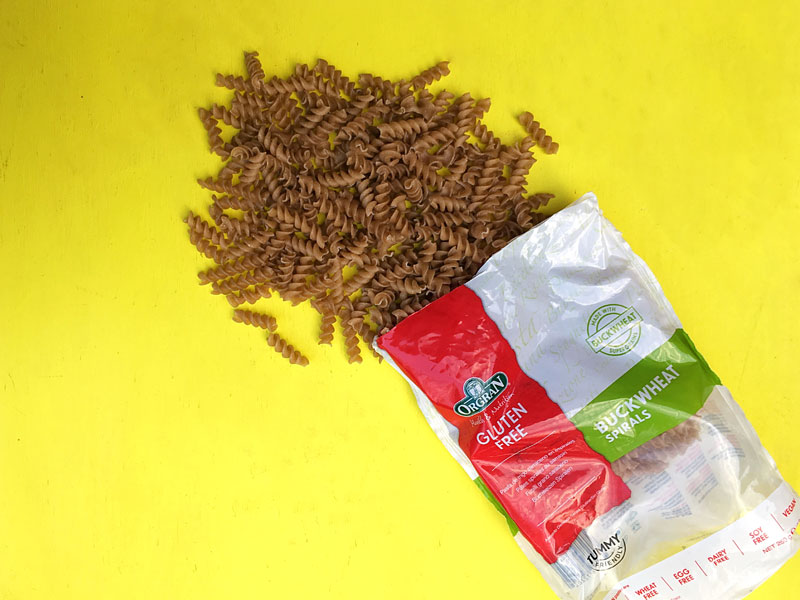 These Buckwheat Spirals tick off all the boxes when it comes to ingredients and free from. They’re free from basically everything except actual calories – wheat free, gluten free, egg free, vegan, yeast free, dairy free and are kosher.

They’re pricey, but that’s gluten-free living for you.

They have a slightly stone brown colour to them, which lightens during the cooking process. Texturally they hold up well but are slightly slimy – much like when you cook raw buckwheat, do not overcook them! Taste-wise they have the same nutty, earthy taste buckwheat has.

Verdict: If you like Buckwheat you’ll love the taste of these spirals, they cook well, don’t fall apart, and allow the sauce to stick to them but I’ve heard they don’t freeze well, so eat them fresh. 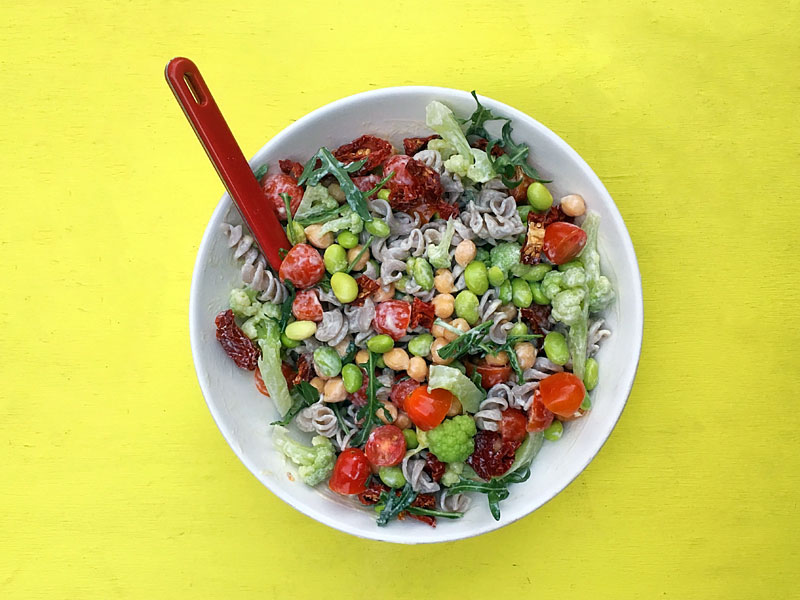 I used them to make a cold Pasta Salad with edamame, Romanesco, tomatoes and chickpeas with a Tahini dressing; a combination I felt made the spirals sing. Get the Recipe here

Price:R70 at Faithful to Nature 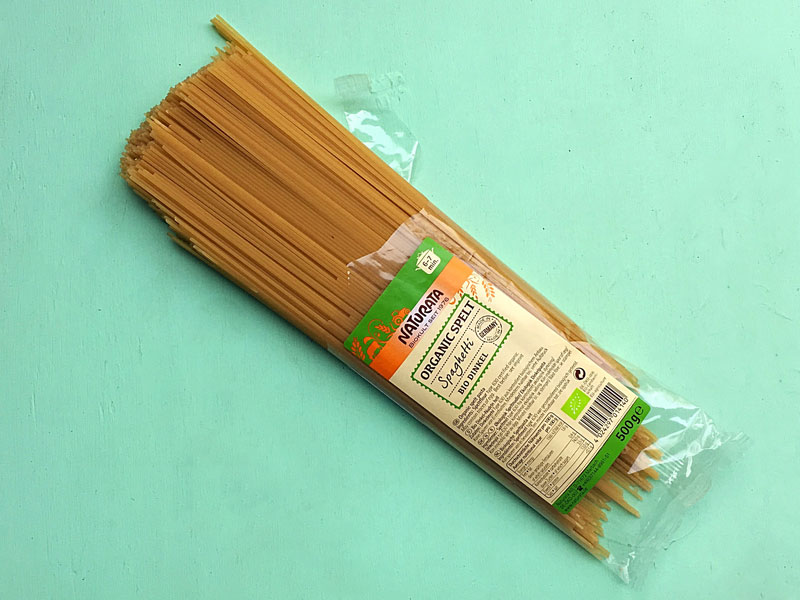 Basic ingredients, check. Organic and vegan, check. Made in Germany, this Spelt Spaghetti is the closest gluten-free pasta to regular pasta you’ll find. It cooks the same, feels the same and tastes the same. They’re even pricier than the Buckwheat spirals, but hey that’s organic and gluten-free living for you.

Verdict: If you’re gluten-free but miss pasta and want pasta that tastes like pasta, this Spelt Spaghetti will give you that pasta feels without the gluten. 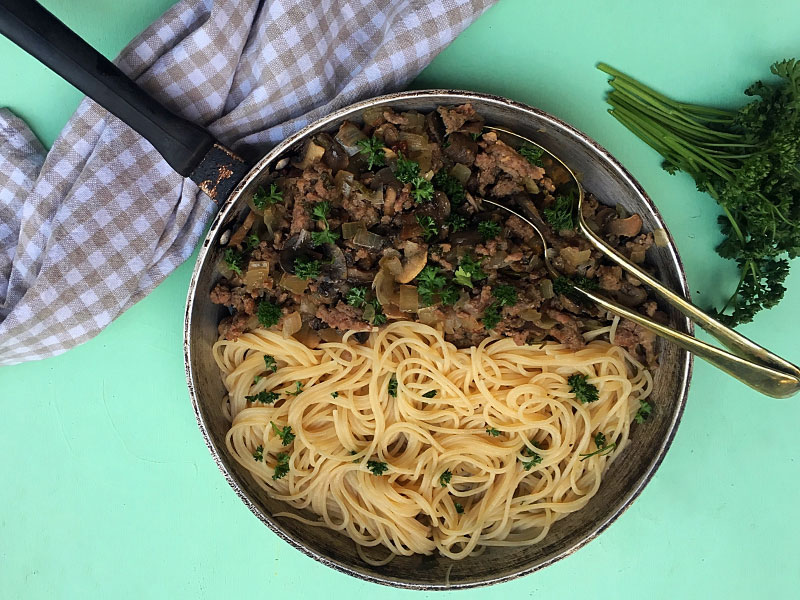 I combined them with a slow cooked mushroom –wine – beef mixture, the sauce stuck to the spaghetti like a dream and it was just as fabulous as it sounds.

Price: R63 at Faithful to Nature 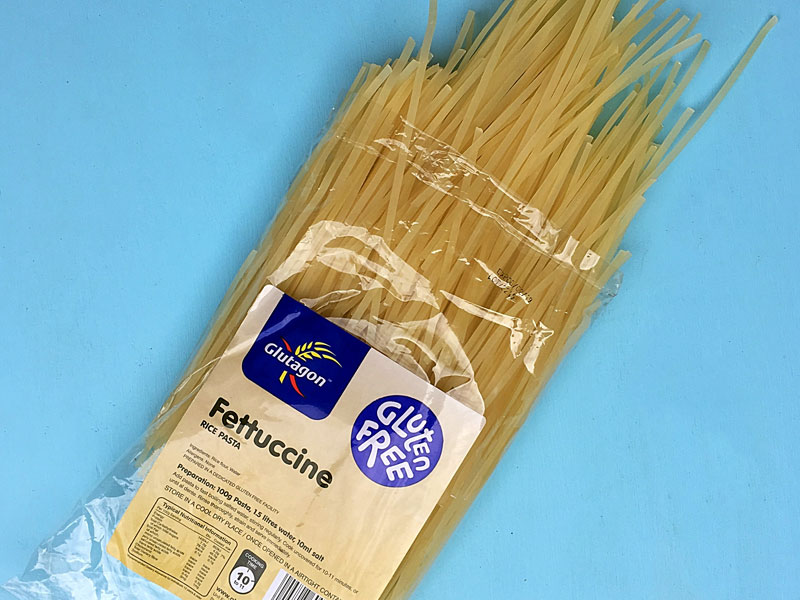 This fettuccine is made just from rice flour and actually resembles rice in longer strips – it’s almost transparent white. Cook time was 10-12 minutes on the packet, it took considerably longer and I learned that rice pasta cooks similar to rice. The water turns milky white and if you don’t stir, and stir often the pasta clumps together in a gooey mash.

Like the others, it falls on the pricier side of ingredients.

Full disclosure, the first time I tried it I cooked it for a one-pot pasta. You know those Pinterest recipes that claim you just throw all your ingredients in a pot and 15 minutes later you have a stunning pasta meal? I discovered there’s a reason you only see the before pictures of one-pot pastas, and that reason is below. It turns into one mushy clump of something that’s borderline edible. 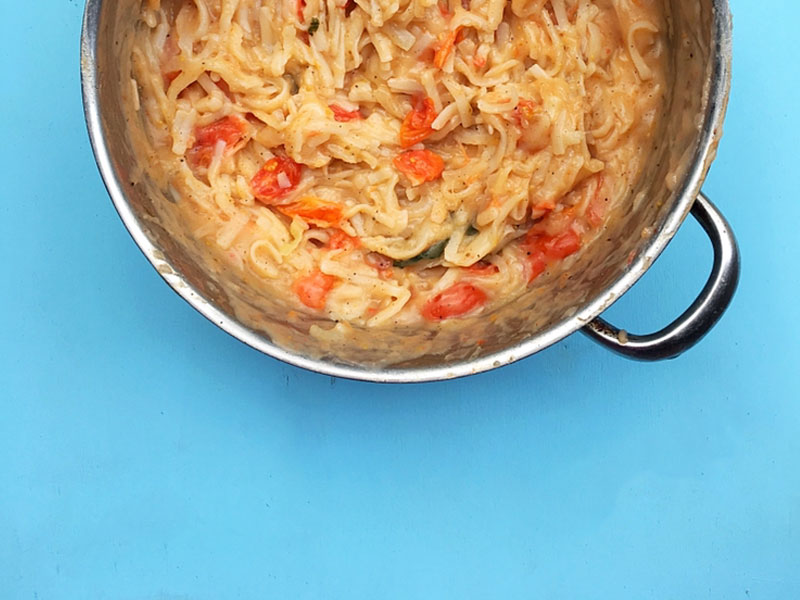 Verdict: When cooked alone, the fettuccine cooks decently, but it does clump together if you don’t stir it often. Overcook it and you’ll have a mush. It doesn’t have much taste but would work with a saucy dish.

Price: R43 at Faithful to Nature 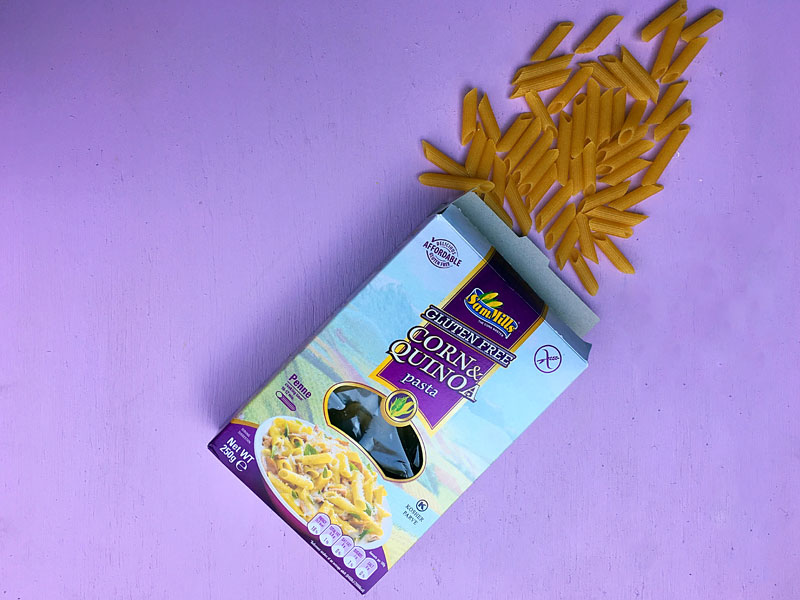 The ingredients are simple enough and this Corn and Quinoa Penne ticks many free from boxes – gluten-free, vegan, egg free and Kosher. It also has quinoa in it and is one of the best-priced gluten free pastas!

It’s one of the firmer gluten-free pastas so it would be more forgiving to reheating. Texturally it has a slight crunch and graininess which I’ve attributed to the corn flour. 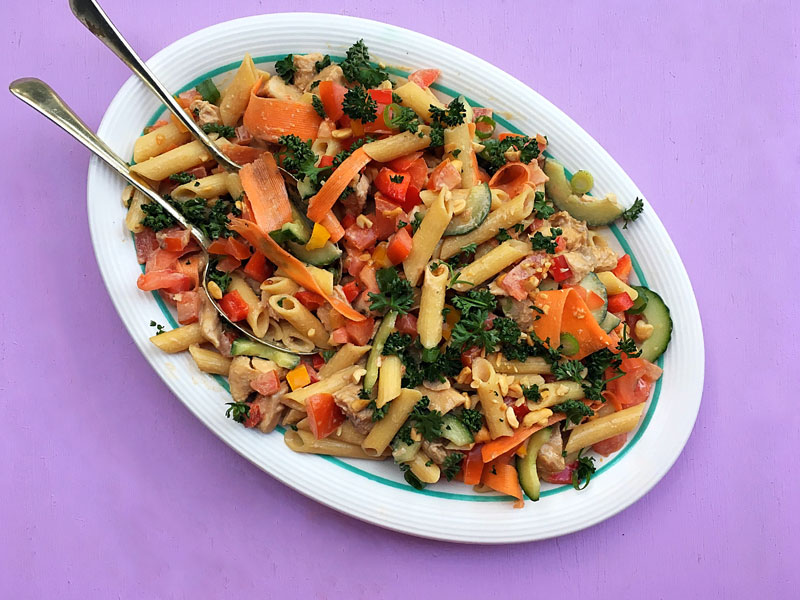 I’m partial to using this type of pasta in a salad but it will go well with a hot sauce or cheesy topping. I used it in a chicken salad with a peanut butter sauce, a recipe I plan on making on repeat.

Price: R57 at Faithful to Nature 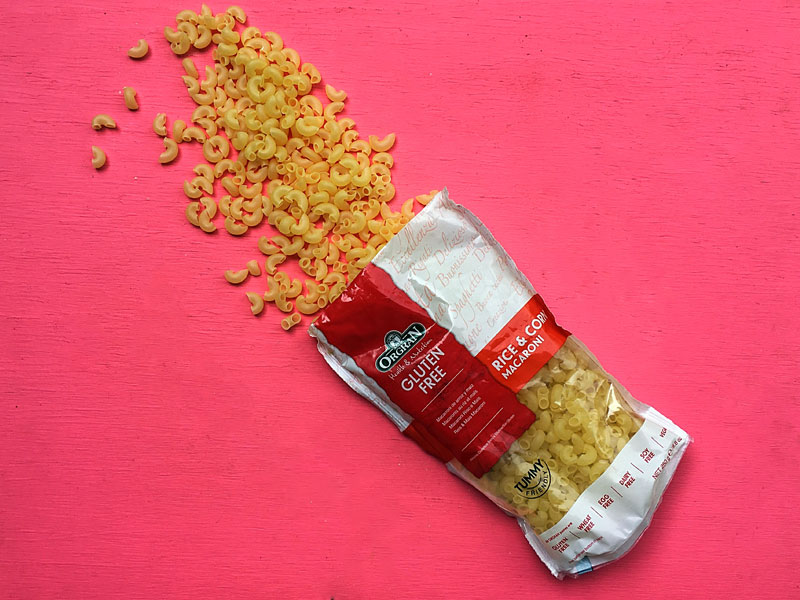 Simple ingredients and like the Ogran Buckwheat Spirals ticks off all the free from boxes. They’re free from basically everything except actual calories – wheat free, gluten free, egg free, vegan, yeast free, dairy free and kosher.

They cook well, but as I discovered any pasta that is made from a rice flour needs to be boiled with care. Stir often and don’t overcook them or you’ll get a mush. I’ found removing them from the water and rinsing with cold water helps them maintain their shape.

Verdict: They have a neutral taste, but that along with their shape makes them perfect for mac n cheese – the sauce coats the macaroni really well. However, they don’t fare well when you try to reheat them, they get a bit mushy. I made a vegan mac n cheese which was creamy, cheese.

Price: R78 at Faithful to Nature 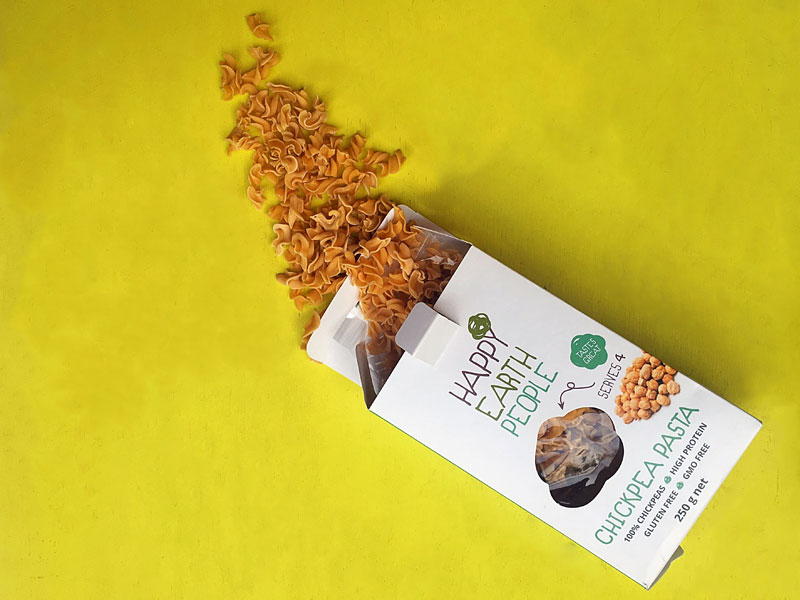 The most different of all pastas tried was this locally made Chickpea Pasta. Made from just chickpea flour, it’s gluten free, high in protein, Low GI and vegan. The only drawback is the hefty price tag, but they are handmade.

They have that distinct chickpea flour taste, which I quite liked and a very good firm shape that won’t buckle under a little reheating. They’re also handmade which means not all spirals are the same, quirkiness I quite liked. 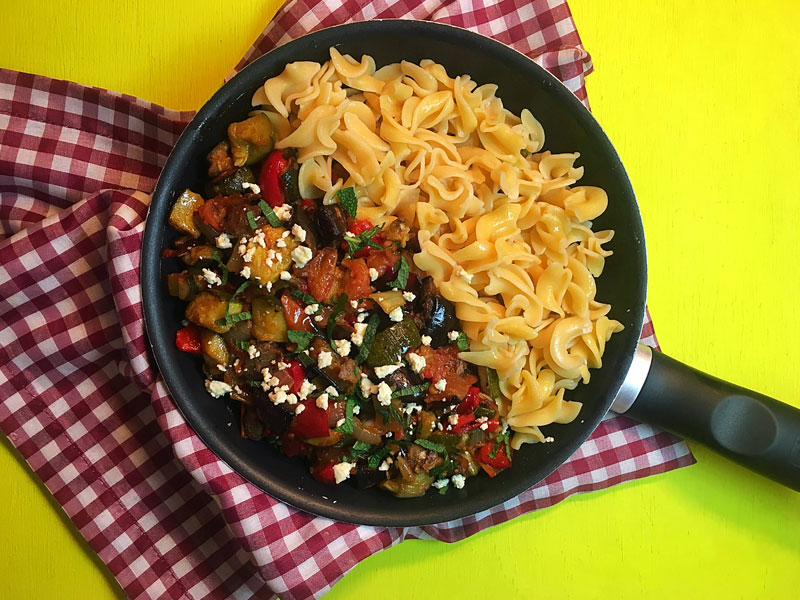 Verdict: They’re different but definitely tasty. The price tag may not make them a regular, but every once in a while they’ll add something special to your meal. I combined them with a vegetable ratatouille and some feta cheese.

This post was brought to you in partnership with Faithful to Nature, an online Organic Shop which stocks a range of green foods, cosmetics, appliances and more. Head over here to shop  – orders over R350 ship for free or follow them on Facebook, Twitter and Instagram @faithfultonature

Thank you for supporting the brands that support us!