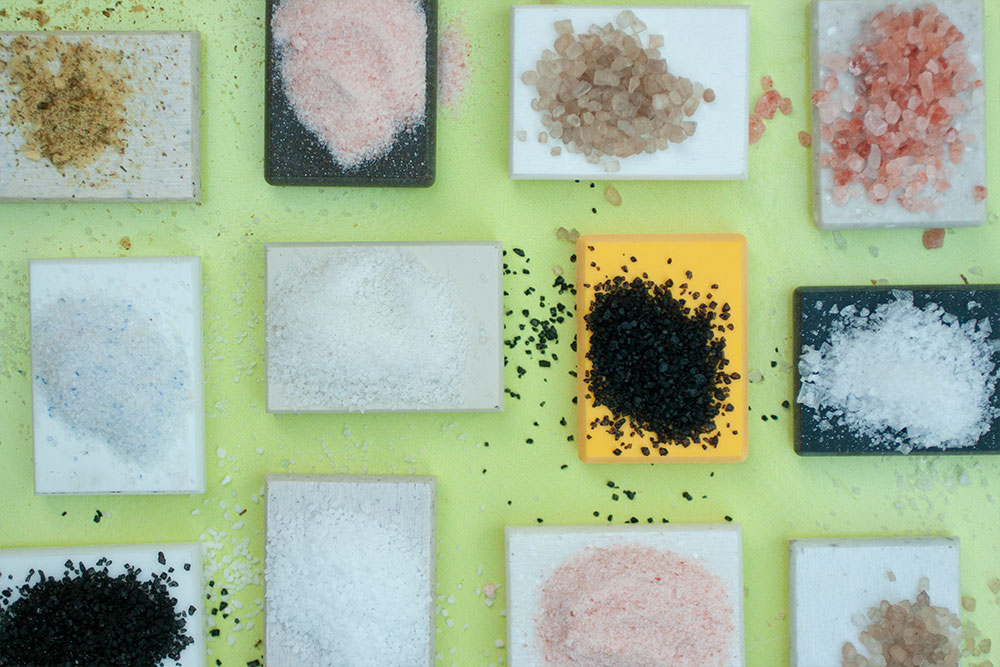 Salt is the one ingredient you cannot cook (or bake) without. The ingredient for which there is no alternative and no “optional”. Alone, salt is inedible but paired with food, it has the magical ability to bring out the flavour of the other ingredients. Food without salt simply tastes bland.

The choice between what salt to use and when is almost endless. Martha Stewart apparently has 73 variations in her pantry. I have a meagre 10 in comparison, but nonetheless, I am a firm believer that salt is not just salt and different salts must be used in different applications. Each time I convince someone to buy fleur de sel and sprinkle it on top of chocolate chip cookies, I get a tingle of joy.

In an episode of Home Cooking, Samin Nosrat answered a listener’s question on salt and explained that the decision of what salt to use comes down to three things; cost, texture and taste. Salts can vary in price from R10 a kg to over R100 for 100 grams. Salts can be very fine, flat, and flaky, or coarse little stones. Some salts have minerals in them which can alter their taste and colour.

Being that person who will start a conversation about the virtues of a flaky salt and why it belongs on cookies, and one who recently scared the living day lights out of the person standing next to me at Woolies, when I screeched upon finding fleur de sel for the first time in months, I’ve decided to give the internet what it needs – a guide to salt. I’ve split the salts up into three broad categories: seasoning salts, finishing salts, and flavoured salts. You also get coloured salts (pink, black and blue), but they can fall into seasoning, finishing, or flavoured, and will be discussed there. The examples given are salts that I have and use, which is only a fraction of what is available. 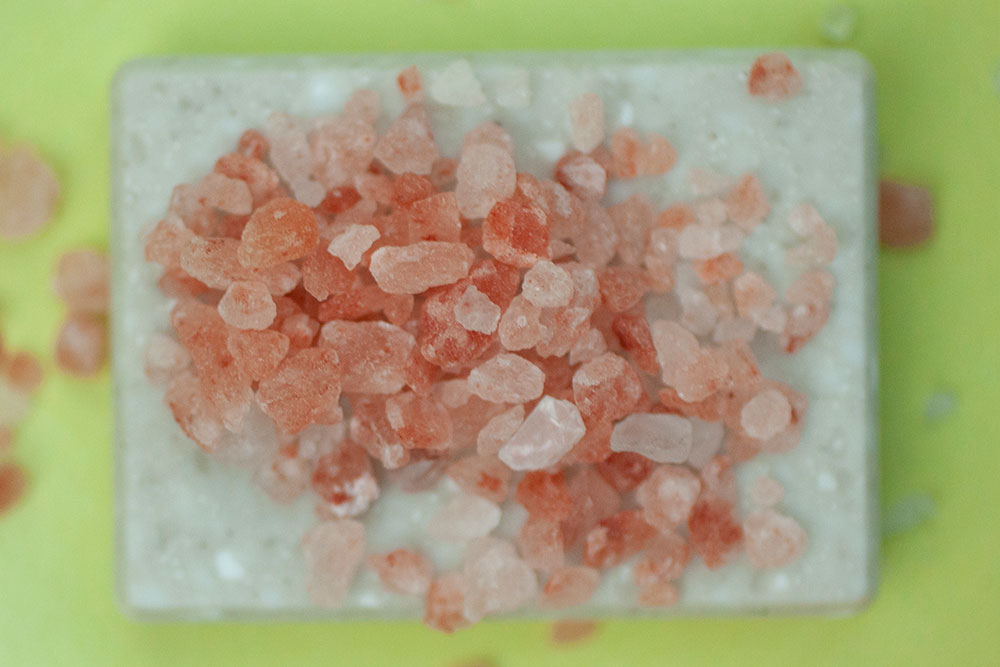 Seasoning salts are used most often in food with the specific intention of seasoning it. This salt is usually plain and the least expensive.

The most used salt is regular table salt. It is incredibly fine and inexpensive. Most table salts are iodised, meaning it contains the mineral iodine which affects the way it tastes, giving it a “minerally” taste.

Best For: Anytime you need to put salt into a dish for taste.  As it is inexpensive this is the type of salt you’ll use when you need a lot of salt, like for salting pasta water. 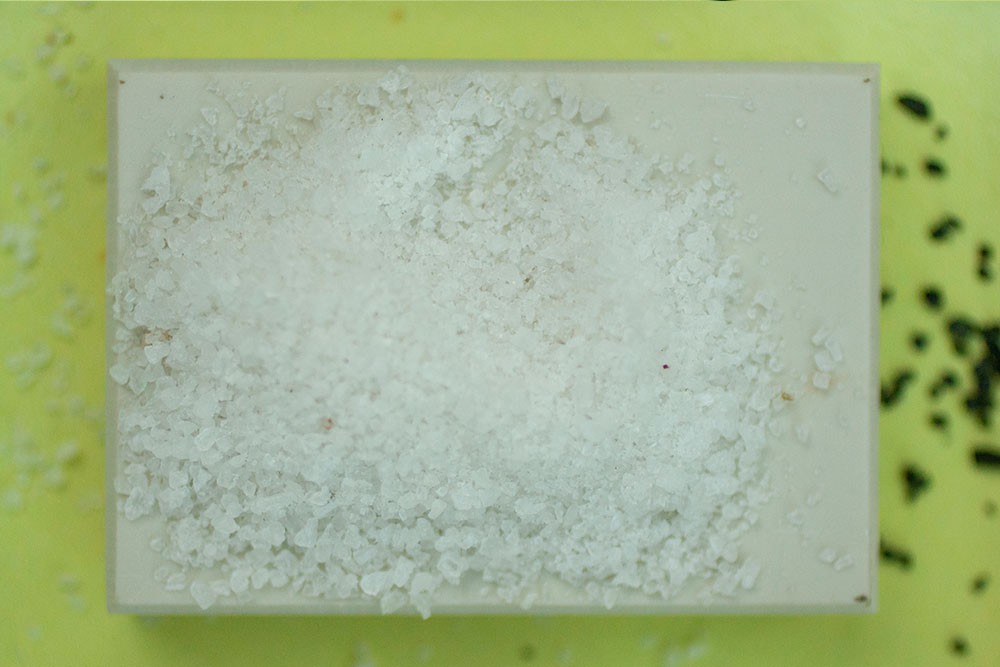 Sea salt is similar to table salt. The biggest difference is that it does not have iodine in it. If you don’t like the taste of iodine or need to avoid it, sea salt is a good alternative. It’s also inexpensive and comes in both fine and coarse varieties.

Best For: Like with table salt, it’s good anytime you need to put salt into a dish for taste. As it’s inexpensive you can use it liberally.

Himalayan pink salt grew in popularity with the claim that it’s healthier than regular salt. Chemically, it’s similar to table salt and comprises 98% sodium. Its remaining composition includes potassium, magnesium, and calcium, which gives it its pink colour.

Best For: Anytime you need to add salt to food to season it. I personally prefer the taste of Himalayan salt to table salt and use it anytime I need salt as a seasoning. However, it is more expensive than table and sea salt and thus I do not use it for pasta water or in places where I need a lot of salt. 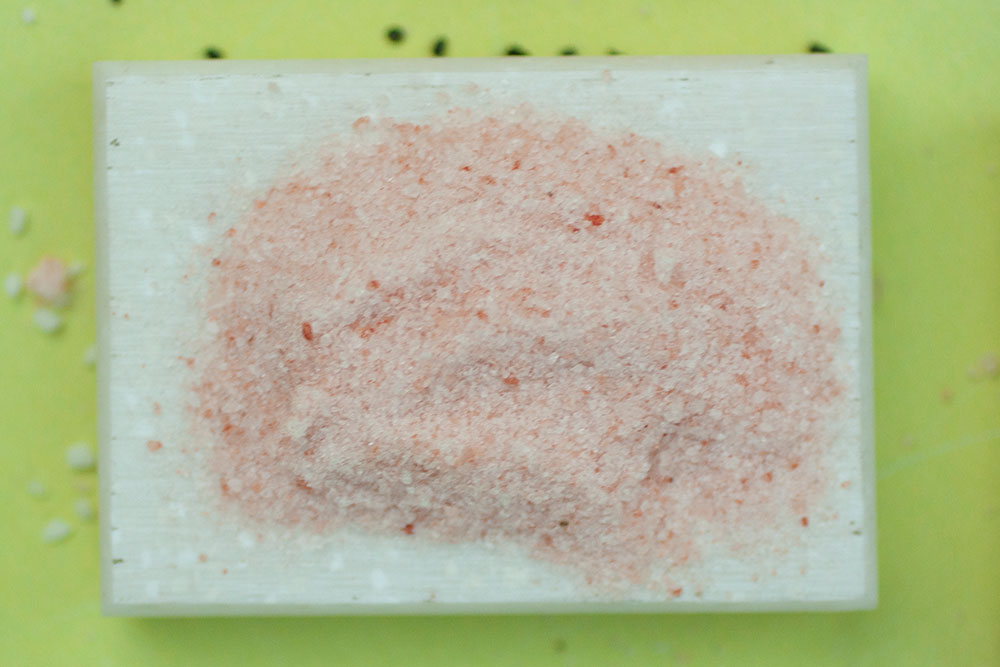 Kosher salt is thus called because of the size of its crystals which make it ideal for drawing moisture out of meat, which is part of the koshering process. However, not all kosher salts are the same. The best one is Diamond Crystal Kosher Salt (unfortunately not available here). It’s not as salty as other Kosher salts and is rolled after it is made, so the flakes are flat and it sticks to food better. This means you can use more of it without over salting your food. Other brands, especially ones you find locally, labelled as Koshering salts are a lot coarser and rounder (like little pebbles) and have a much greater salinity, making them incredibly salty. If you see kosher salt in a recipe it’s unlikely that’s what’s being used and you can almost guarantee that it’s Diamonds.

Best For: Most recipes, especially those written by chefs, use kosher salt and they use it for almost everything (much like table or sea salt). The size also enables a better pinch or handful when seasoning. Because I don’t get it often, when I have it, I use it sparingly. If you do come across Diamond Crystal Kosher Salt, grab a box as it is undoubtedly the best Kosher salt and the best all-purpose salt.

Blue salt is salt that has the mineral “sylvite” in it which gives it its blue streaks of colour. It originates from salt lakes in Iran. It can be used as you would sea salt and has a more subtle taste and cleaner aftertaste.

Best for: To season foods or added to dressings. It’s more expensive than sea salt (and Himalayan salt) so use it sparingly. I use it to season vegetables or in dressings – places I will really taste it. Its blue colour also makes it good for finishing dishes where you want to see those blue streaks. 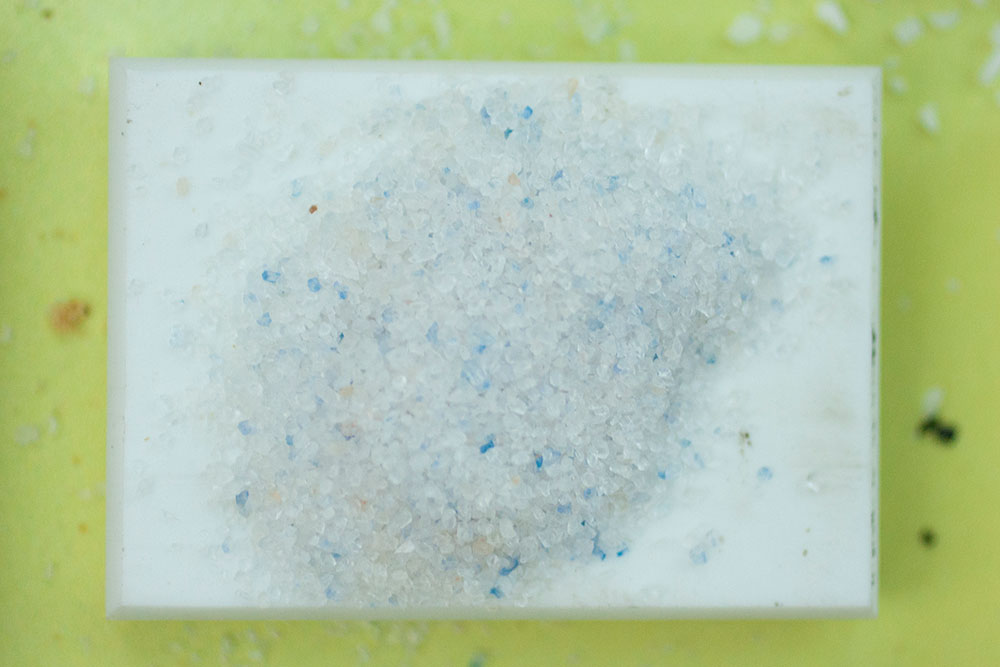 Finishing salts are salts used as the final step in food preparation to finish it off. They’re never mixed into the food but rather sprinkled on top before baking or serving.

Fleur de sel which means “flower of salt” is a rare form of salt harvested in parts of France. It’s a very delicate and flaky salt that is used to finish dishes and is commonly used in sweets like chocolate, caramel, or cookies. It is one of the most expensive salts in the world. It is not a salt you use to ”season” and definitely not the salt you dump into pasta water – you would lose it’s taste and texture. It is one of my favorite salts and if you add one special salt to your collection, make it this one (or Maldon if you can’t find this).

Best For: Finishing dishes. You want to feel the crunch and taste of its unique minerals. It shines when used with sweets and desserts and takes them to the next level. I sprinkle it on top of chocolate balls or chocolate bark, add a pinch into caramel, and sprinkle it on top of chocolate chip cookies before baking them. Because it is so fine, it melts into caramels or ganache, giving you that salty sweet taste. 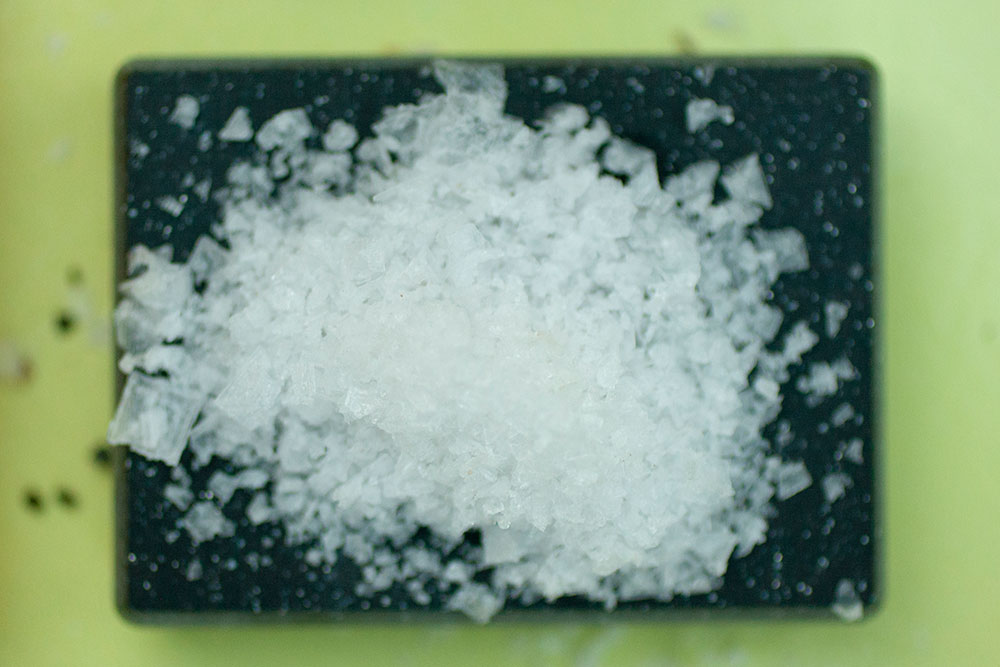 Maldon sea salt is actually a brand of salt, but it is completely unique unlike Himalayan or even Fleur de sel which you can buy from different brands and it would be essentially the same thing. It comes from a 135-year-old family-owned salt-works on the southeast coast of England. Maldon salt is soft, crunchy, flaky and pyramid shaped. Maldon salt is beloved by chefs who use them to finish off both savoury and sweet dishes, adding a salty crunch. They come in two variations – the original and a smoked Maldon salt, in which the Maldon salt flakes are gently smoked over oak to give them a distinct smoked taste.

Best for: Finishing Dishes. It has a unique taste and crunch – you want to enjoy that crunch and not have it dissolve into the ingredients. You can top both savoury dishes like roasted vegetables, salads, and meats. You can also use it to top cookies or chocolate – it’s much flakier and crunchier than Fleur de sel and not only adds that delicious taste but also adds a stunning visual. I like using it on cookies, but don’t use it in recipes like in a caramel as the flakes are quite sturdy and don’t dissolve as well.

Pretzel salt is a coarse large-grained white salt of uniform size with no additives. Think of the salt you get sprinkled on pretzels – it’s more opaque than regular salt and has its own taste. I have yet to find true pretzel salt locally. I procured a tub from the US (this brand) and it’s still going strong years later as it’s not a salt I use regularly, but it is amazing on top of bagels and challah.

Best for: Topping bagels or pretzels. It would also work great in a homemade “everything but the bagel” seasoning. I also use it sprinkled onto challah as a topping instead of seeds and it is amazing. However, if you do use it – eat that bagel, pretzel or challah roll the same day. The salt dissolves into the bread overnight which can make it “soggy” and it loses that salty crunch. The only exception is if you’re using it on hard pretzels where it lasts better. 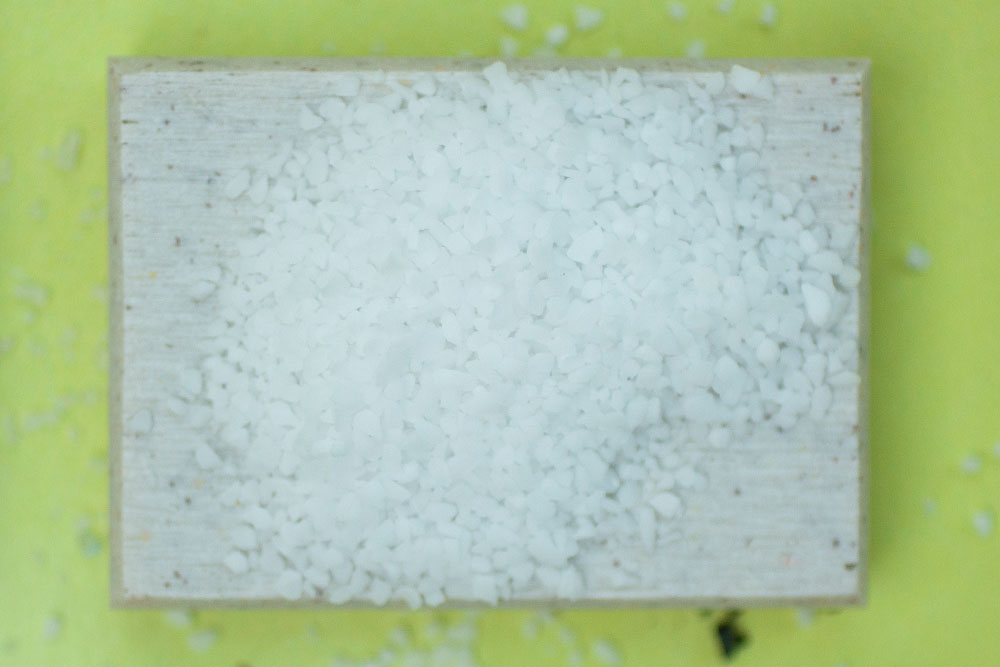 You get two types of black salt, one that falls under finishing salt and the other that would be a flavoured salt.

The first type is salt that is coloured black by being “bathed in activated coconut shell charcoal dust”. It’s essentially an activated charcoal salt and tastes like salt. However, its colour and distinct crystals makes it good for finishing dishes where you can see it and it adds a texture and contrast, like atop an avocado toast or a tomato salad.

The second type of black salt is technically known as Indian Black salt or Kala Namak and is a more brick colour than black. It has a special type of Indian mineral salt with a distinctive/sulphurous flavour. In Ayurveda tradition this black salt has medicinal properties being rich in iron and is said to help cure heartburn, flatulence and help with digestion.  In food it is used to give food a sulphur-like taste – the taste you would get with eggs. It’s used in vegan dishes like tofu to make a tofu scramble that mimics the taste of eggs and is also used in chutneys, raitas, pickles and other savoury Indian dishes.

Best For: When you want to impart a sulphur-like taste into a dish, like in a tofu scramble.

Flavoured salts are salts that have added ingredients to give them a specific taste. You can get various flavoured salts from turmeric, to red wine, seaweed, onion and smoked. You’d use them in dishes where you’d want the added flavour. I currently have an onion salt which I use in omelettes and salads and a smoked salt which is really good with proteins like meat and fish. 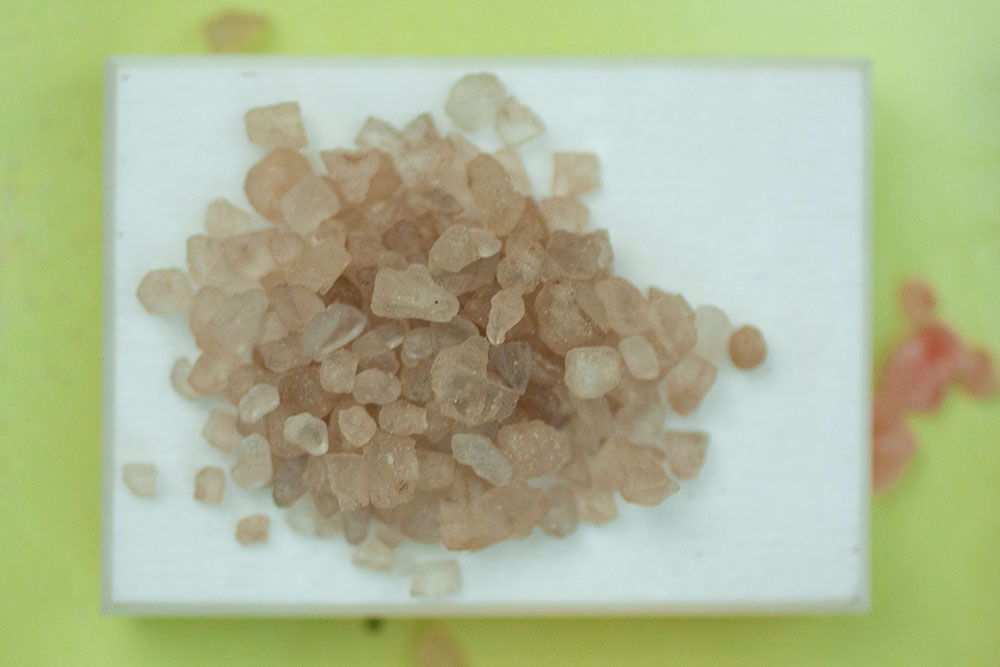 Best for:  Any dish where you want to impart the added flavour of the salt on the dish. They work really well on their own as you get salt + the flavour. They’d be great added to popcorn, oven baked crisps, or veggies.

And there you have a salty guide to salt…. to be taken with a pinch of salt.

A list of Every Spice I Have and Why

The 6 speciality ingredients I always have in my pantry