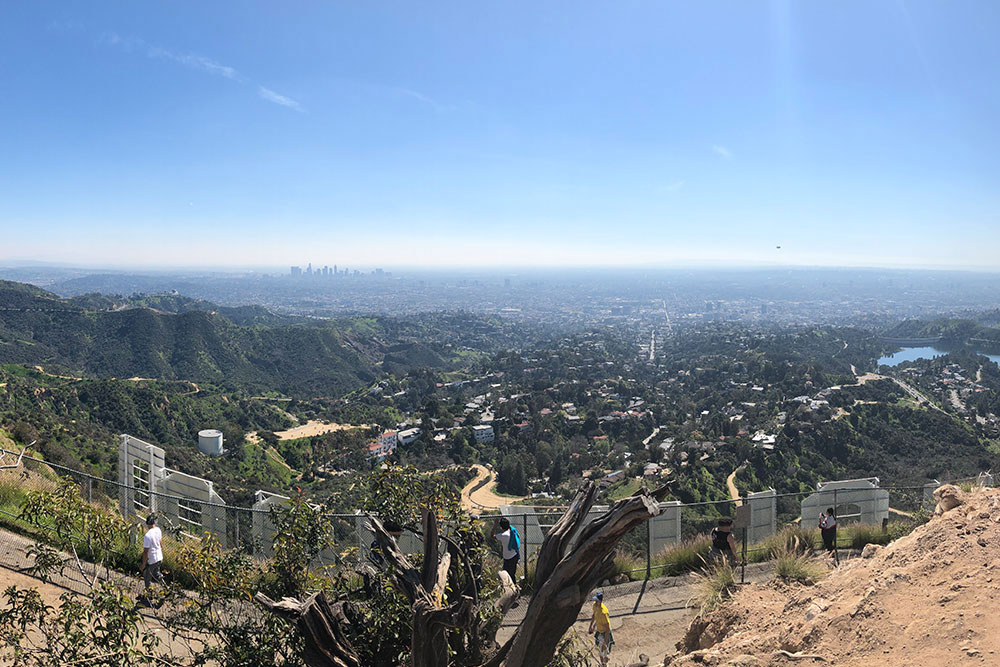 Los Angeles offers some pretty incredible hikes, from easy to hard and everything in between. Hiking gives you the chance to see the city in a way you don’t from the back of a car or tour bus, plus a few hours of sunshine, nature and walking do a world of good.

Below are two hikes we’ve done and are putting in the ‘do not miss’ category, when hiking Los Angeles. 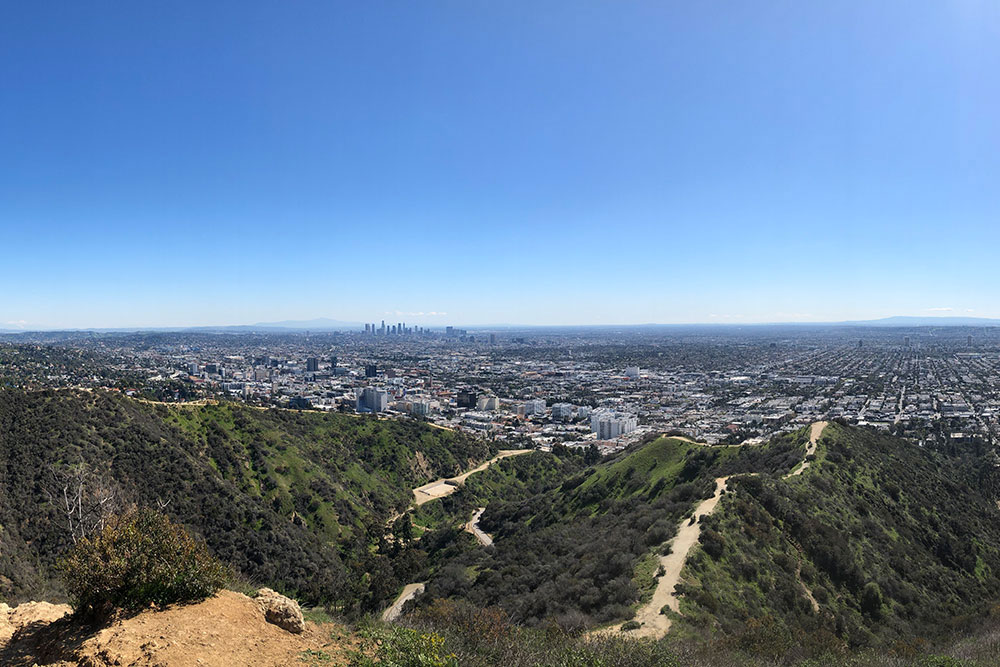 Runyon Canyon Park is a 160-acre park in Los Angeles. It’s a popular park known for its views of the city, the Hollywood sign and celebrity sightings (of which we saw zero).

Enter the park at the North Fuller Avenue entrance (exact address 200 N Fuller Ave). There’s a huge double gate with a sign, so you can’t miss it. 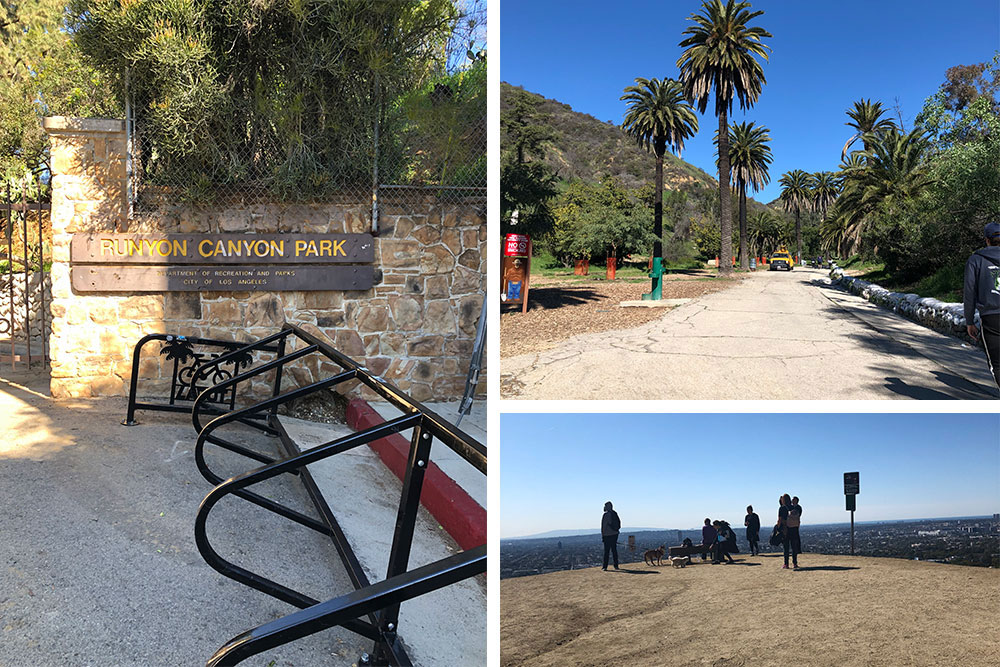 We were close by, so chose to run the 3km there (and back again) instead of driving and struggling with parking. The entrance is by a residential neighborhood with a lot of apartment blocks, so parking is tight. Doing the hike in the middle of the day (not on weekends) will give you the easiest chance to find parking but read the signs before parking – a lot of areas require cars to have special permits to park on the roads, plus there are time restrictions. If you can, walk, run or uber there instead.

We didn’t follow a specific route, we figured it out as we went, choosing to take the paths that interested us. In a park like Runyon Canyon, where there isn’t signed trails and most trails merge with each other, deciding as you go along, based on interest makes it more fun. Go where the wind blows you. That being said, I think we chose a particularly nice route. Starting on an easy trail and ending with hard single track, big climbs and even better views.

Once you’re in the gates, it begins on a paved road, shortly after there’s an unpaved path curving to the right. Take that one. It leads you to the first view point – Inspiration Point, which overlooks Downtown LA and has a little bench.

If you continue up and to the left you are led up wooden stairs, which may seem like the hike is getting hard. It’s not, this is the easy part. You continue climbing and will see the first glimpse of the Hollywood Sign through a wire fence on your right. A fence which is littered with locks. Keep climbing to your next view point – clouds rest. There are benches to relax on, as well as the first defibrillator we spotted, you know – in case of emergency.

On the right you’ll be able to view all the homes dotting the Hollywood Hills. Eventually you’ll hit a paved path, which is also a great place for some hill repeats, if you’re doing a run. Keep walking. There are a few houses sprinkled along the road, which are barely visible through huge gates, just like in SA 😉. Eventually that paved road turns into dirt and you continue along until you reach the Mulholland Drive Exit. You can turn around and go back from whence you came, but you don’t want to. This is where the hike gets good.

To the left is a dirt road which connects to the West Trail – the hardest trail in the park, which leads you to the highest viewing point. The trail is now mostly single track and is very rocky so wear a good grip shoe if you’re doing this part. 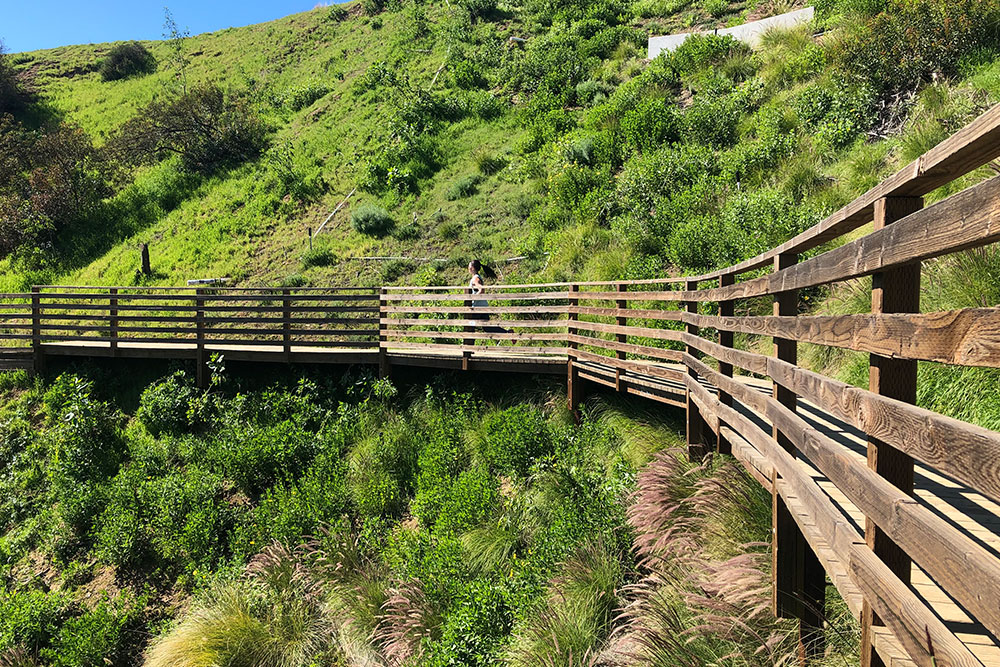 We followed the path which led us down a million wooden steps (stunning), along a wooden bridge (stunning) and to a rock which I believe (but am not sure so don’t quote me on it) is Indian Rock (frightening) which leads you to the highest viewing point. It may or may not be a 90-degree uphill climb (read: crawl) but it felt that way. It’s honestly quite petrifying but a little encouragement from the locals on how to climb (legs apart angling forward, sideways sometimes, on your hands and knees if you must) and we made it without falling off.

The top has views of the mountains on one side, the Hollywood sign on the other and what I’m sure is the whole of LA on the other. Also, another defibrillator – you know, in case of emergency.

What goes up must come down and so we ventured down what essentially is a rocky sand mountain. My preferred method was in the squat position sliding down, known as squat sanding, it’s a sport I invented it, keep up. Eventually you get to a paved path where you can sprint down (if you have the energy) and it’ll lead you back to the entrance on Fuller Ave.

The above loop was approximately 8km.

There are a few water fountains dotted around, but it’s easier to bring your own (so you know where your water is). There are no ablution facilities so drink to thirst not to hydrate.

People are generally friendly and nice, so don’t be shy to ask if you’re lost or embarrassed because you’re hyperventilating over climbing a rock. It felt more of a local than tourist hike – so people on the route generally know where to go or how to climb. 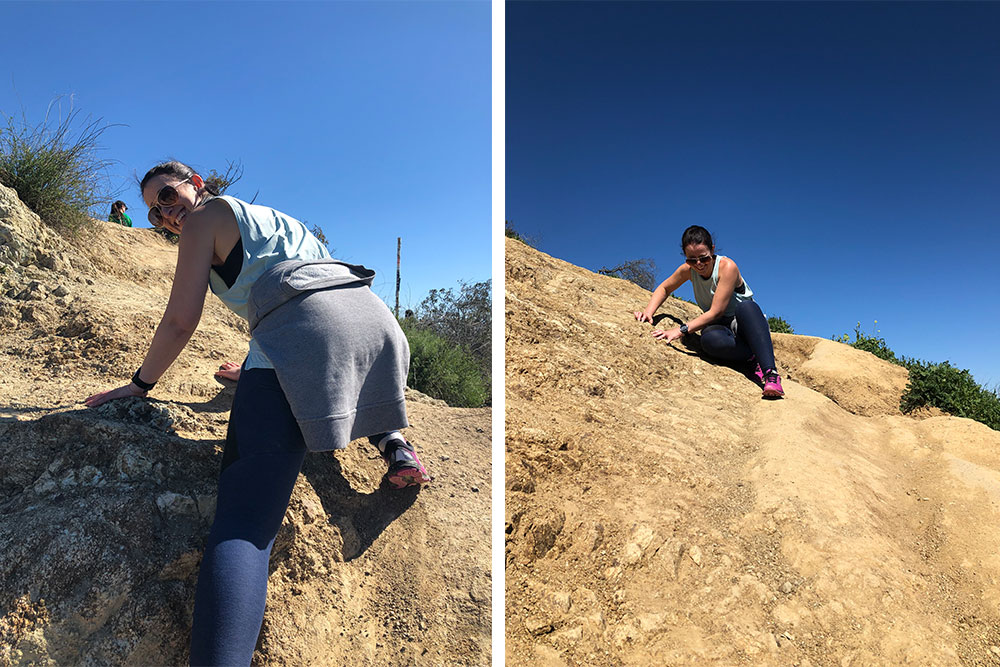 At the Fuller Ave entrance there’s a “tuck shop” manned by no one. It works on an honor system. Using it was incredibly exciting – because people are actually putting money in the slot and there appeared to be no theft. As a South African, one can imagine just how exciting and novel this all was.  There are drinks, snacks and some fruit. Prices are on a board and there’s a slot to put your money in. We were so excited to use it,  we chatted up Peter, an elderly man who sits on a chair outside the park presumably every day and after he realized we did actually have money and just wanted change, he broke our note for smaller notes so we could do some honor system shopping.

Griffith Park is one of the largest parks in North America and is right in the middle of LA. Aside from the numerous hiking trails to do, there’s a bunch of other attractions in the park including the LA Zoo, pony rides, Griffith Observatory, The Bronson Caves and is home to the Hollywood Sign.

We did the Burbank Peak Trail, which is the hardest but shortest trail. It leads you right to the back of the Hollywood sign, which is the closest you can actually get to the sign. The views on this hike were incredible, like stop and exclaim “Oh My Gosh, this is STUN-NING” multiple times, good. 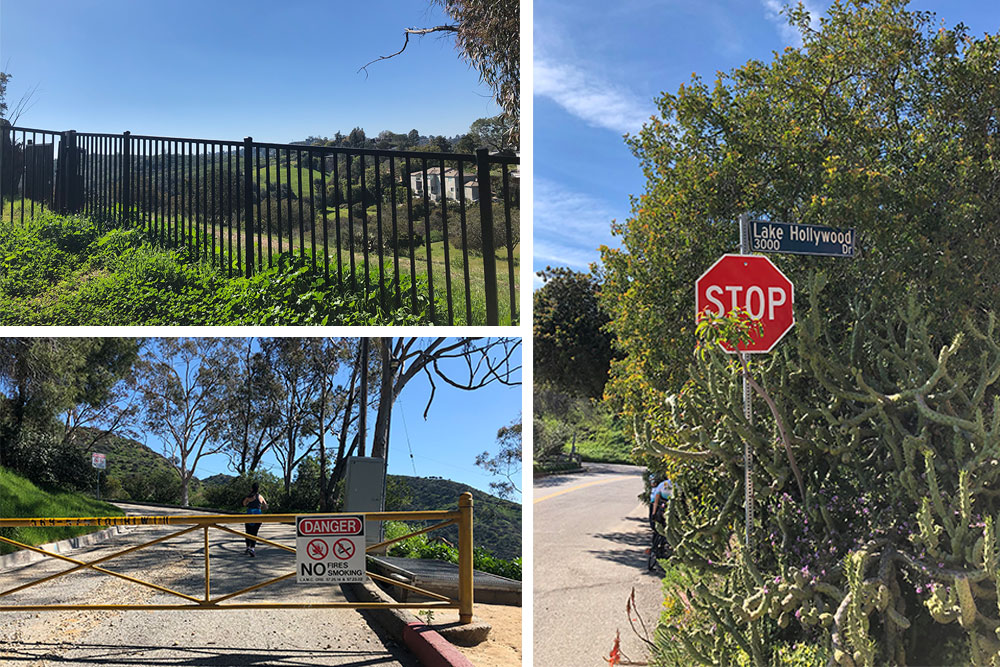 The trail starts off of Wonder view Drive. We got into the park using a side road right next to the highway which eventually led us to the entrance by Wonder View Drive. I’d give directions but we got lost and found our way by sheer luck, one cop, a strong internal GPS and following the cyclists and people in peak caps. Once you find the road and park, you need to walk past the yellow barrier in the middle of Wonder View Drive and just follow the crowds all the way up until you reach a large area. On the right-hand side is a little trail and a sign signalling the Burbank Peak Trails.

There is a decent police and traffic patrol presence here (read: not the place to park where you shouldn’t, parking tickets are in dollars). Parking by the residential areas is prohibited as is entering through various gates. There is however public parking on Lake Hollywood Drive (which is right off Wonder View Drive). It fills up fast so get there early. You also need to pay attention to road signs. Avoid the top half of the road which is for 20-minute drop and go, not parking. Lastly bear in mind that the parking is on a 45-degree angle hill, is all parallel parking, and LA people like to get right up close with their car neighbors, so familiarize yourself with the hand break and tight spaces. 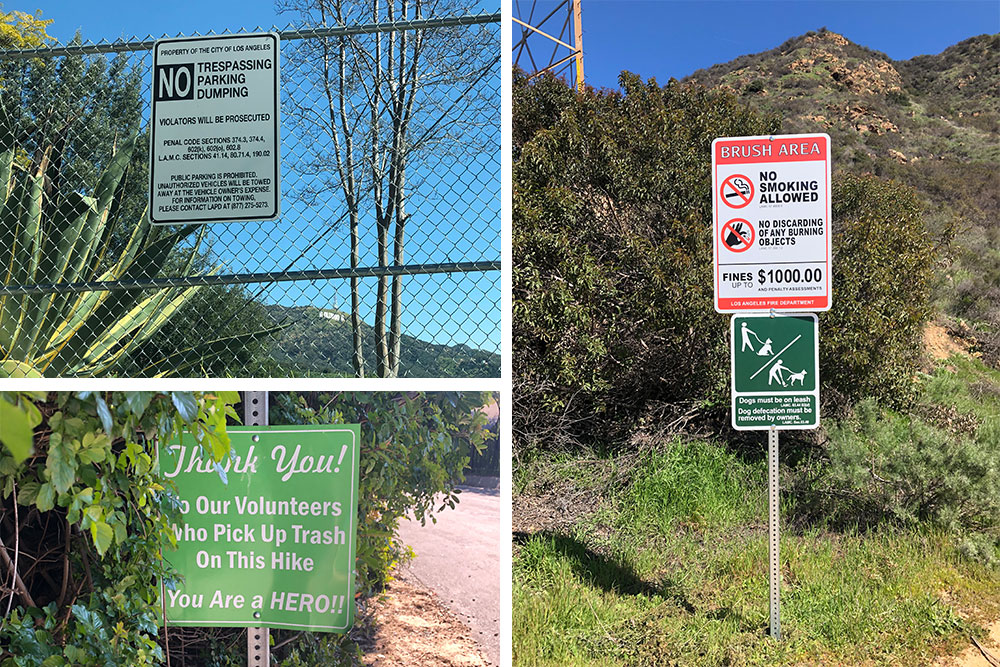 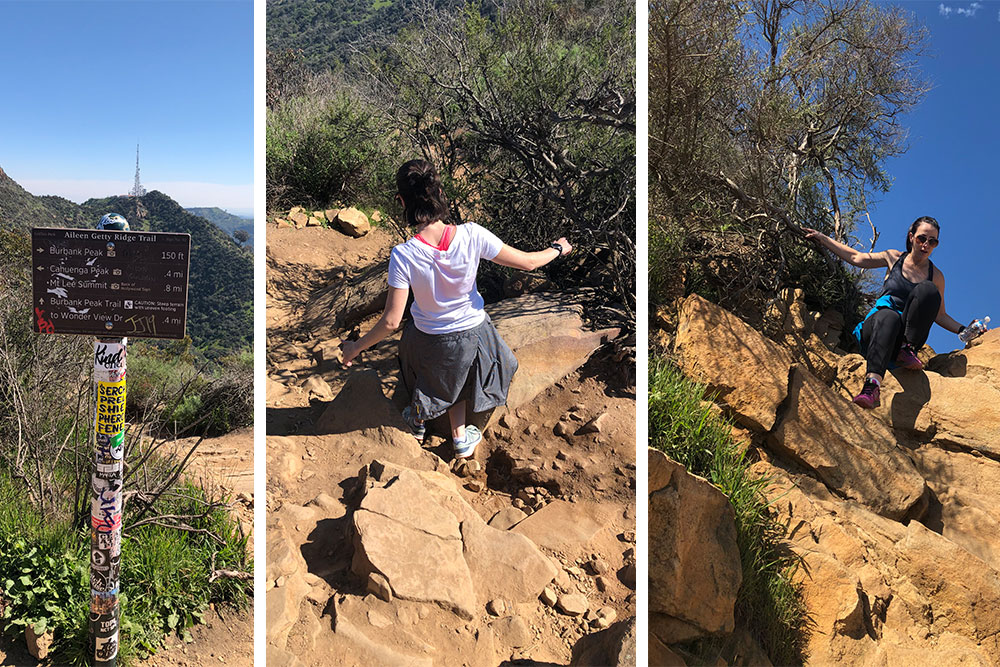 We did the Burbank Peak Trail which is well marked and easy to follow. It’s steep, rocky and single track; but people are incredibly patient and nice about waiting for others to come up or down. 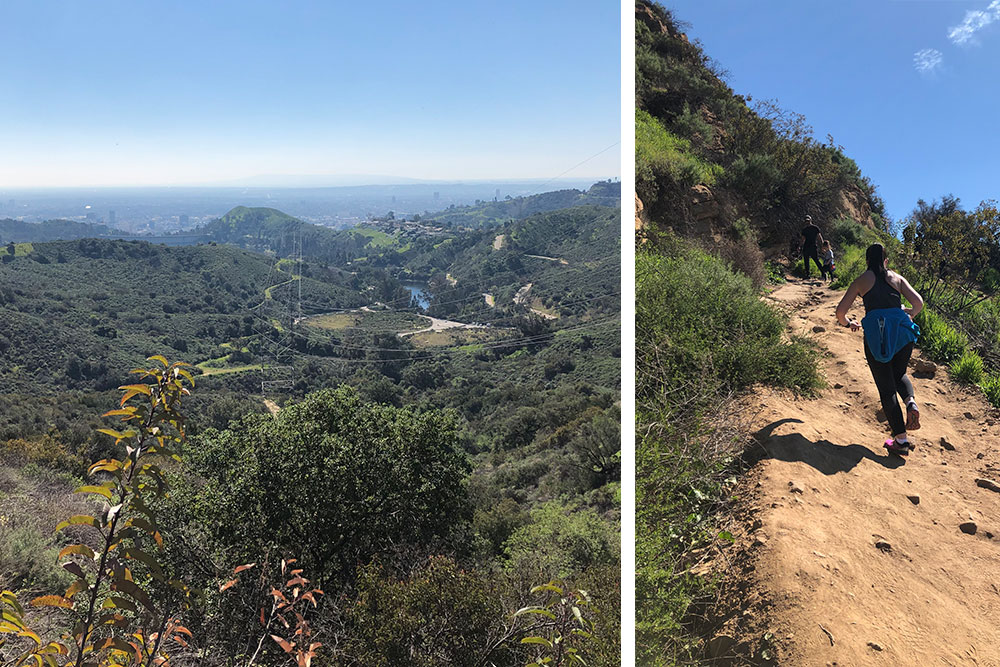 The first Peak you’ll come across is Burbank Peak, there’s a fork in the trail and to the left is the Peak. Head over there to visit the Wishing Tree, which is a solitary pine and survivor of the 2009 wildfires. At it’s base sits a trunk with a pen and a paper where people write wishes and drop them in. Why yes, we did indeed wish upon a Wisdom Tree. Opposite the tree is an American flag which is a September 11 memorial. You can also see a view of the Hollywood Reservoir from this point.

Once we had done our wishing we headed back to the fork and took the other prong towards Cahuenga Peak and then finally Mt Summit. Mt Summit is the highest point and is literally right behind the sign. It’s easy to find your way, there are enough signs and not enough tracks to get lost on. It’s a challenging hike which is rocky and sandy with some steep rock climbs. But it’s hellava fun, and as long as you have a good pair of shoes on and keep your eyes on the ground, you’ll be fine.

Just before you hit Mt Summit you exit the trail and land on a paved road, that takes you all the way up the summit to the side of the sign. You can choose to go back down that paved road (which is the easier, but longer route down) or head back from where you came, which is what we did. You get views of the sign, the reservoir, the valley, the mountains and it really is just gorgeous.

Bring your own water, we did not spot one water fountain, but do not litter.

There are no ablution facilities, so again – drink to thirst not hydration.

It is a very touristy trail (the sign) but wasn’t overly crowded (and we did it on a Sunday). Plus, tourists mean more people who are happy to take your photo. 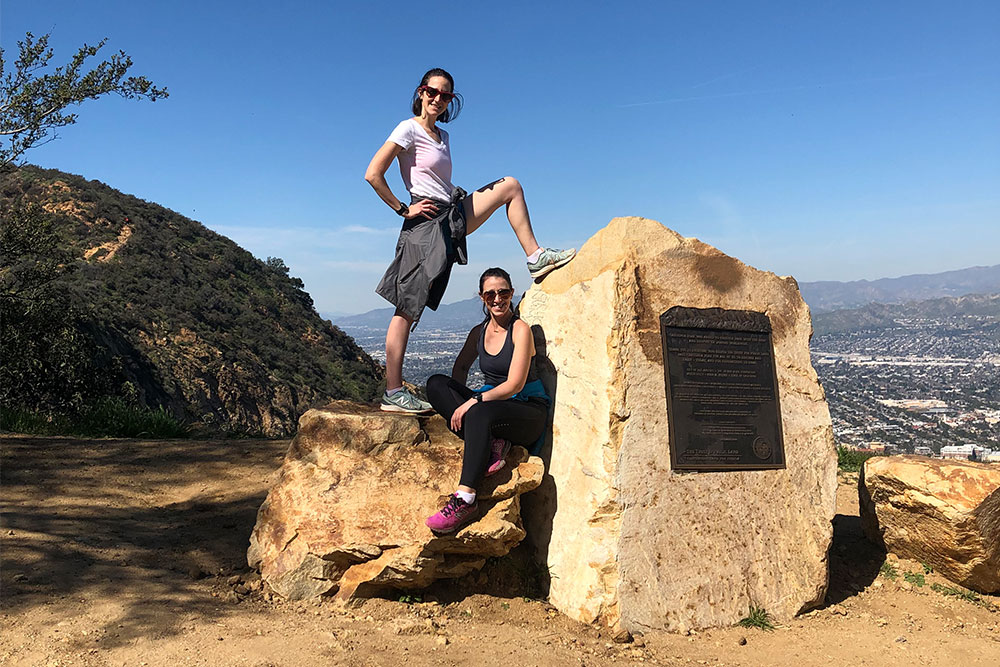