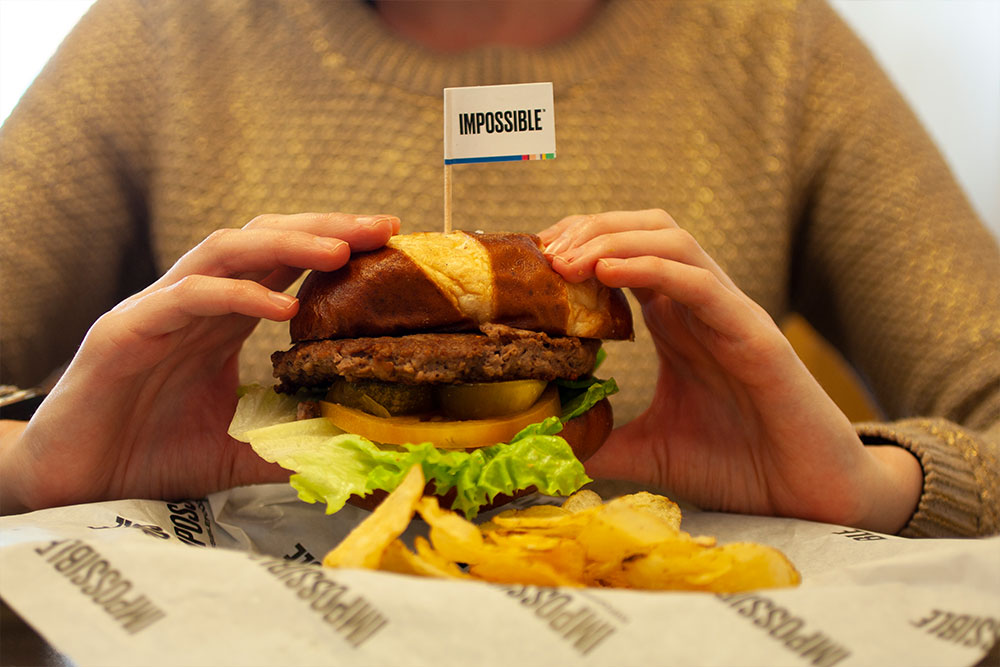 It’s 2019 and a plant-based burger is no longer a mash-up of legumes, veggies, herbs and a flax egg to hold it all together. No longer is a veggie burger literally a burger made up of veggies, with the only resemblance to its carnivorous counterpart, its patty shape.

Two companies – Impossible Foods and Beyond Meat, have redefined the plant-based burger by each creating their own version of a meat free burger that looks like, feels like and tastes like a meat burger. They even bleed. Instead of a list of vegetables, their ingredient list is full of plant-based proteins (pea protein in the Beyond Meat burger and Wheat and Potato protein in the Impossible Burger), ingredients that give it that meat like colour (Beet juice extract in Beyond Meat and Heme protein in Impossible Foods) and a bunch of others that are apparently all found in nature. No GMOs, no artificial ingredients. The total ingredients tally up to 21 in the Beyond the Meat Burger and 18 in the Impossible Burger, a lot more than in your traditional plant-based burger.

The goal of both companies is to create a meat alternative that is so convincingly like meat, it will encourage more people to switch their meat options for plant-based options (better for the environment). It also gives plant-based eaters who crave that meat taste and texture, a way to satisfy their cravings while still being able to be plant based.

I tried the Impossible Burger during a recent trip to Los Angeles and am here to share my impossible experience. The Impossible burger uses Heme protein to give it’s burger that meaty look, feel and taste. Heme is an essential molecule found in every living plant and animal. The heme used in the Impossible Burger comes from the roots of soy plants. It’s called soy leghemoglobin. That is then inserted it into a genetically engineered yeast which is fermented and multiples to produce a lot of heme. That forms the main component of the Impossible Burger which is then added to a host of other ingredients to create a burger that looks, feels and tastes like meat. Meat from plants. 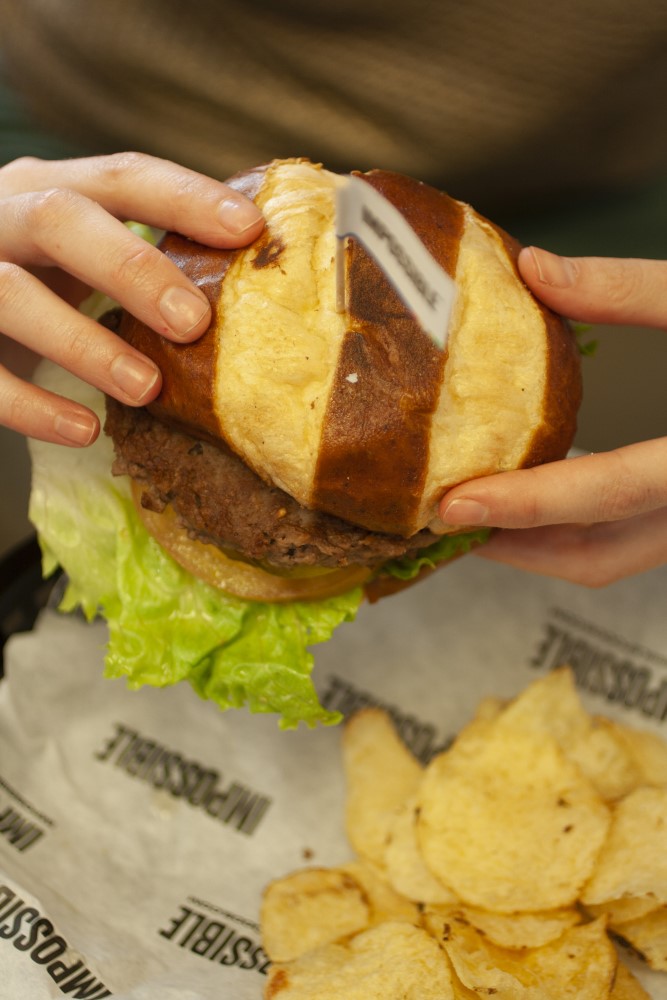 My impossible burger arrived inside a pretzel bun, on a bed of lettuce, tomatoes, pickles and sriracha mayo. It looked exactly like a meat burger. The patty had that distinct ground beef look and was browned exactly like a meat burger would be. Mine was prepared “well done” and didn’t have that pink, rare meat look, so no, it did not bleed. If you break off a piece and look closely (as I did) you can tell it’s not meat, but on the whole, it’s a pretty convincing match for a beef burger.

It had the same chewy texture of meat and wasn’t flimsy or falling apart like some veggie burgers do. It felt like biting into a meat burger. 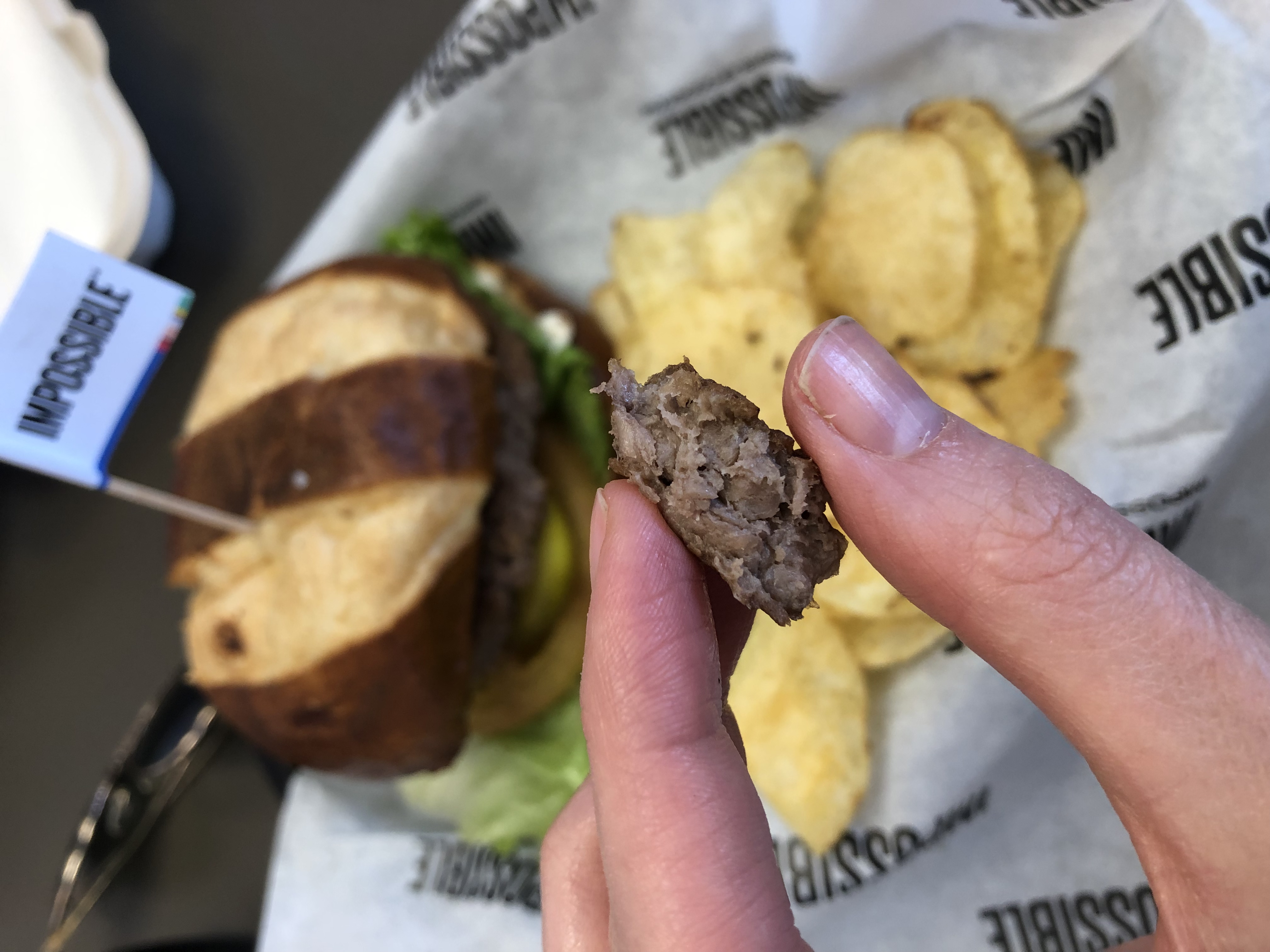 Eaten as a burger (with a roll, lettuce, tomato and sauce) it tastes exactly like meat. But, when I tore off a piece and had a taste of the patty alone, it tasted less like meat. It had, almost a cashew taste, although cashews are not on the ingredient list. My biggest issue with the burger, taste wise, was that it was a bit bland and could have done with a heavier spicing. It did, however, leave me with that same distinct burger aftertaste in my mouth and the feeling that I had just eaten a burger.

Overall, the Impossible Burger is the most meat like non meat burger I have ever tasted and can easily be mistaken for a meat burger. It is a great choice for someone wanting to cut back on meat (but still wanting a burger) or a non-meat eater who has been craving a real burger.