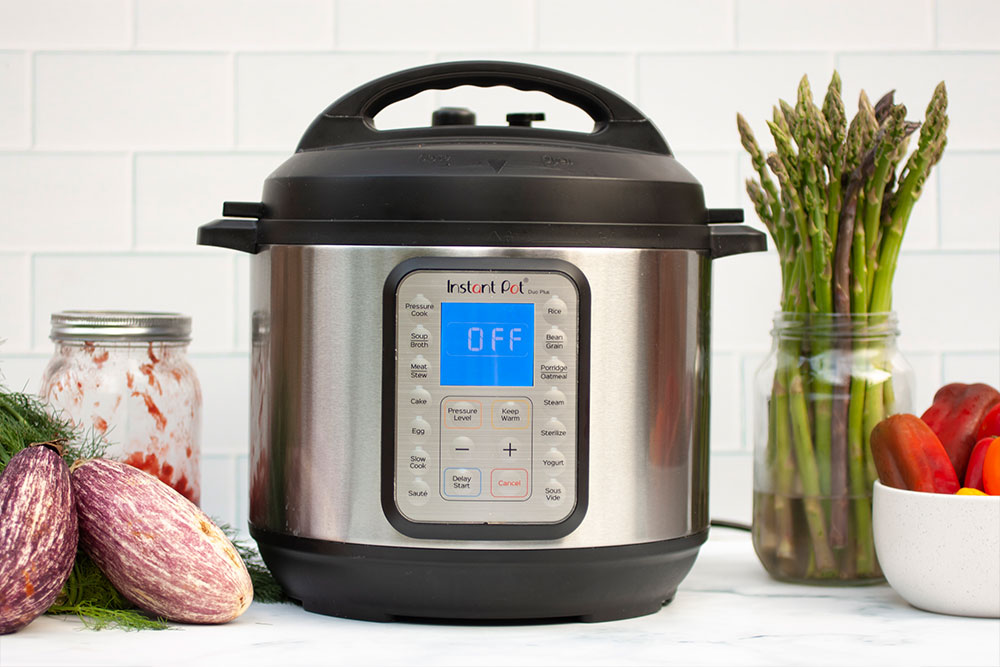 On Our Bedside Table: A little French Restaurant, a Beetle, an Attic, Three Liars and Girls in trouble

Two years ago, I got the Instant Pot Duo which I promptly fell in love with and since have been using it on average once a week, often many times more. It has become one of my hardest working appliances and seamlessly fits into my cooking. The Instant Pot is now my go to for cooking grains, making broths, soups, stews, curries, the softest meatballs and keeping food warm. I’ve also made a lasagne and bobotie from start to finish inside it’s inner stainless-steel bowl and become a pro at the pot in pot method which has allowed me to cook two separate things at once. 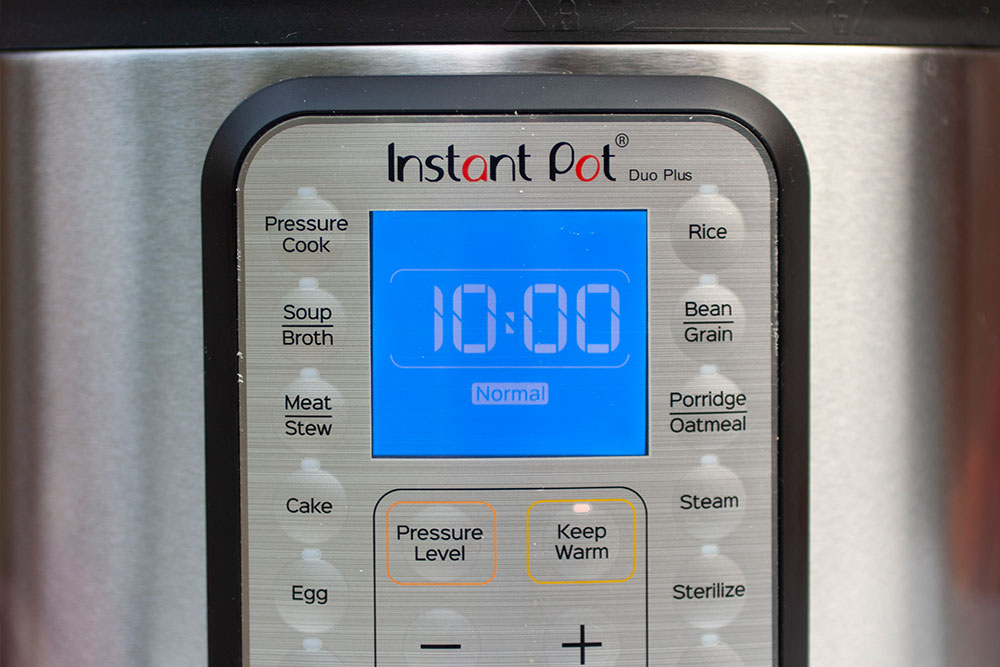 What is the Instant Pot Duo Plus?

The Instant Pot Duo Plus is a multi-cooker currently available in a 6-litre capacity. It has 9 functions, working as a pressure cooker, slow cooker, rice cooker, yogurt maker, sous vide, sauté pan, steamer, sterilizer, and food warmer. It comes with 15 smart programs – soup/broth, meat/stew, bean/chili, cake, egg, slow cook, sauté/searing, rice, multigrain, porridge, steam, sterilize, yogurt, keep warm, and pressure cook. The smart programs are set to cook any of the above for their recommended times at a touch of a button. There’s also manual mode which allows you to set the time and pressure level you want.

1. It has two new functions making it a 9-in-1, not a 7-in-1. The two additions are its use as a sterilizer (you can sterilise baby bottles, dummies and jars) and a sous vide machine.

2. It has 15 smart programs, whereas the Instant Pot Duo has 14. They’ve removed the poultry program and added an egg and cake smart program.

3. It has an upgraded lid for maximum safety. It automatically seals when closed and releases steam by pushing down a button. On the Instant Pot duo, you had to make sure to seal the lid before turning it on and steam was released by moving the quick release button to the left.

4. It has and upgraded large blue LCD digital display with status icons to indicate the cooker’s status to allow you to better track your cooking.

To me the biggest changes and what really differentiates the Instant Pot Duo Plus from its predecessor is the lid upgrade and the addition of the sous vide function. 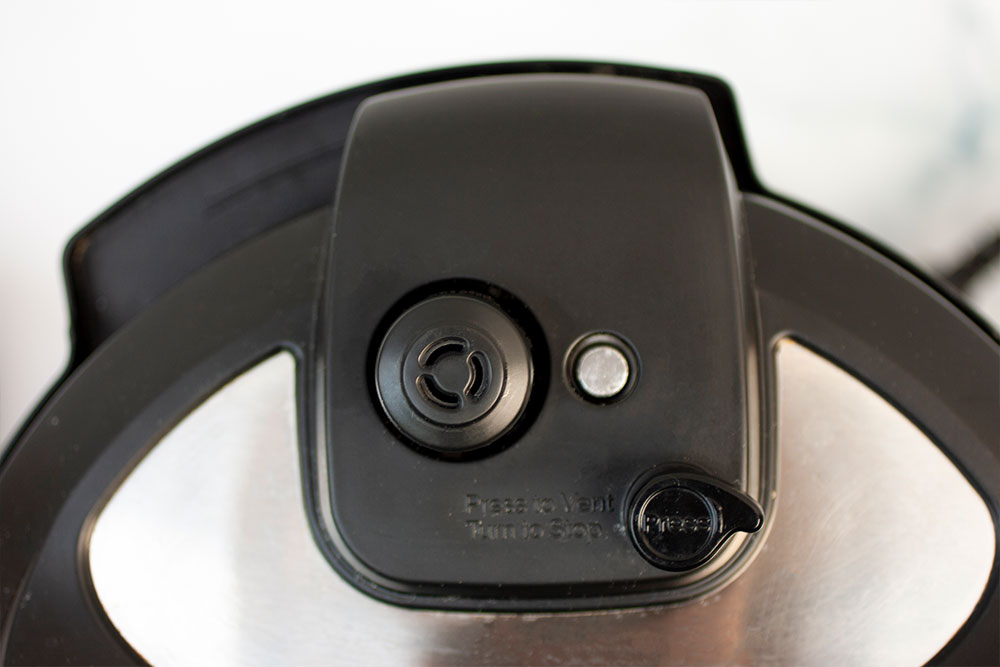 If you’re a new parent, the sterilise option would be useful for sterilising bottles and dummies.

My favourite functions on both the Instant Pot Duo and Instant Pot Duo Plus are the sauté function and keep warm functions.  The sauté function allows you to sauté, sweat or sear vegetables and meat to build flavour before adding stock or a sauce and pressure cooking without having to use a pan on the stove. It makes it convenient and reduces the amount of dirty dishes you rack up.

The keep warm function is a function that I don’t think is talked about often enough! It keeps food perfectly warm without cooking it or drying it out. I use it a lot on Friday night where I cook dinner a few hours before we eat and find it does a brilliant job at keeping anything warm without turning vegetables into mush or chicken dry. It is really genius.

Although one could technically bake a cake in the Instant Pot Duo by using the manual program, until two weeks ago I had never tried to bake a cake in it. As the Instant Pot Duo Plus comes with a new pre-set cake function, I decided to try it out, baking a honey cake in it. I used my normal honey cake recipe, baking it in a 20cm round cake tin that fit within the Instant’s Pot inner pot. I found a recipe online that used the same sized tin and baked it for almost half the time than the smart program. Worried I would overcook it, I manually set it. Turns out the smart program was correct and I ended up needing to cook it for longer. 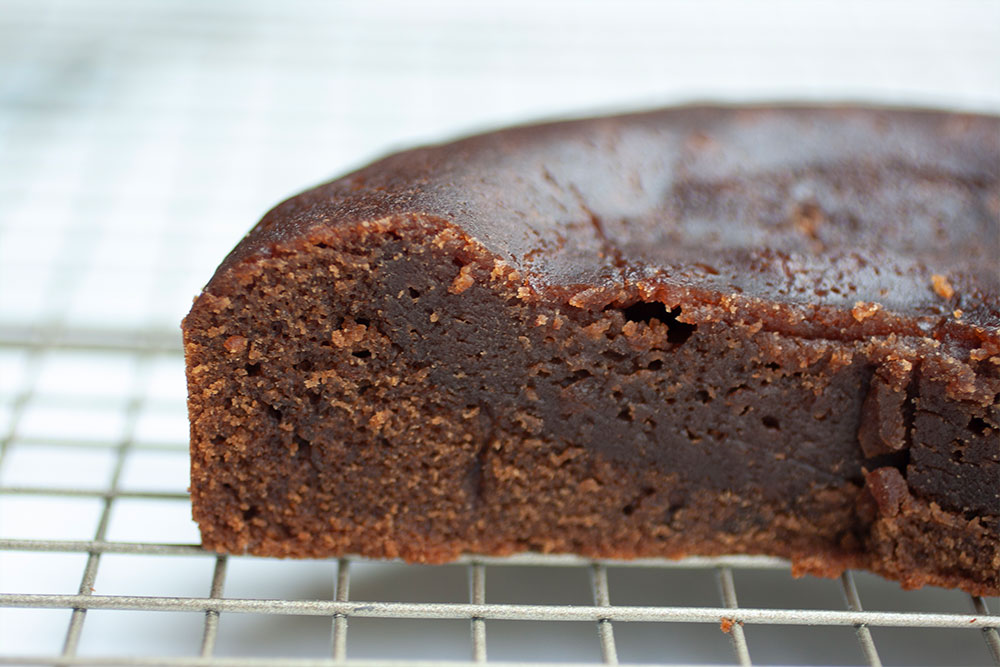 The Instant Pot bakes cakes moist and dense – perfect for very fudgy chocolate cakes or a malva pudding. For a dryer cake with a better crumb and lighter feel, the oven is still you best bet. It also takes considerably longer (at least 30 minutes) to bake it in the Instant Pot than the oven, so it is not the faster option. If you do bake a cake in the Instant Pot remember that it needs to be baked in a cake tin not direct in the instant pot inner liner. You also need to add some water in the pot and place the tin on the steamer basket. And lastly, cover the tin carefully with tin foil to prevent steam getting into the cake and making it soggy.

Sous vide as a cooking method has become increasingly popular and the sous vide function is the most hyped about function of the new Instant Pot Duo Plus. Sous Vide machines don’t come cheap and the Instant Pot Duo Plus adding it to 8 other functions makes it more affordable and accessible. It was the function I was most excited to try out after hearing how it cooks proteins to perfection. 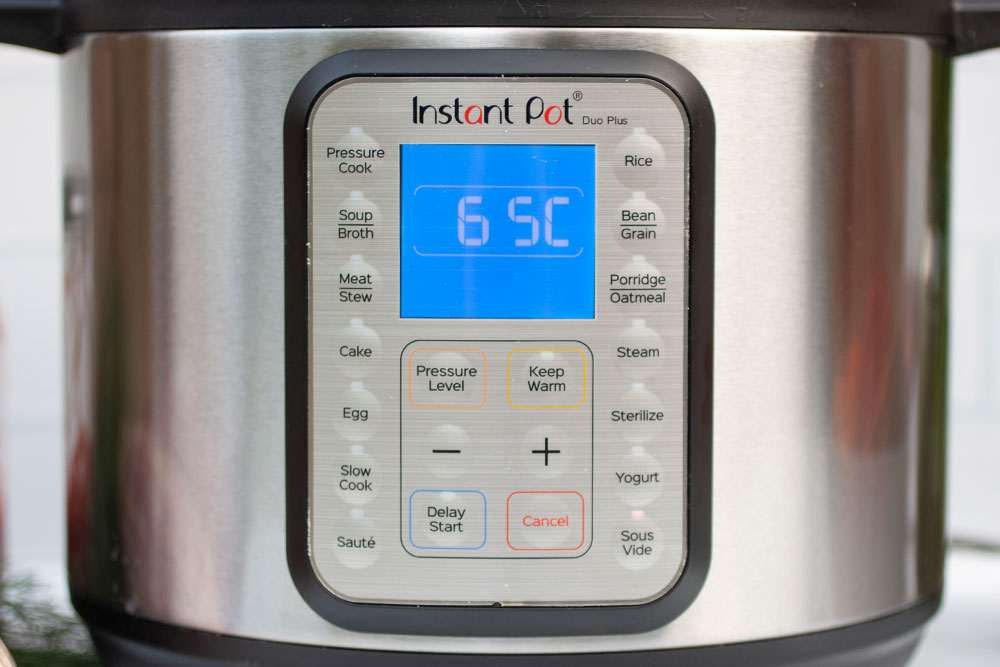 I tried it on a roast fillet, chicken and fish. I struggled with getting the timing on the roast correct, learning that a roast needs 12 to 24 hours. I did achieve a perfectly moist chicken breast and a perfectly flaky fish, of which I shared the recipe here.

My feelings on sous vide, however, are probably going to be my most unpopular cooking opinion. In a word, “meh”. I didn’t love cooking sous vide.

I wanted to love it and started reading everything I could google on it. I Learnt that it is was (and is) used by chefs to get the perfect temperature meat and be able to serve it to diners fast. That some love using it to meal prep, prepping their proteins for the week and leaving them safely sealed until they’re ready to eat and a quick sear will finish it off. I learned that the slow cooking at an exact temperature helps break down the muscle giving you a perfectly tender piece of meat and that it is virtually impossible to over-cook anything by sous vide.  Yet, every time I made another dish sous vide, it confirmed that it wasn’t a cooking method I cared for. I found it overrated.

Sous vide requires you to cook your protein in a sealed plastic bag immerged in hot water for hours.  I don’t have a vacuum seal and found sealing the proteins in both a freezer bag and Stasher bag finicky and despite removing as much air as I could, sealing the bags and not immersing the seal, found liquid puddles at the bottom of the bags when I removed them. For those uncomfortable with the thought of cooking in plastic (something I was) make sure to use BPA free bags. While a vacuum seal bag is the ideal, the Stasher bags are best from a safety and environmentally friendly point of view. (They’re silicone, not plastic and can even be used safely in an oven) 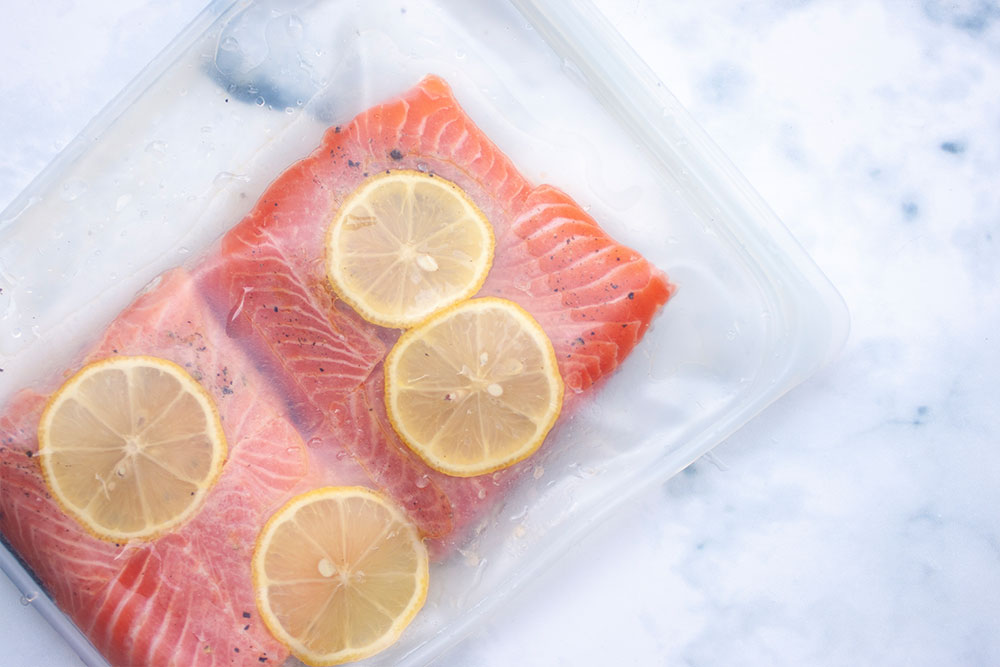 I also found it to be a very drawn out process. In general, I don’t mind spending days prepping dishes or hours cooking – if I deem the end result worth it. In fact, I love the challenge of making things from scratch and the process involved. When it came to sous vide, I found the time irksome and didn’t like that I couldn’t tell how the meat was doing until I took it out and actually sliced it. It takes almost an hour for the pot to come to temperature and the fastest thing I cooked was fish for one hour, that’s two hours on something I knew would take me one hour in the oven with similar results.

To be fair, I was most impressed with how it cooked a skinless chicken breast – perfectly moist with my marinade’s flavours deliciously intense. That, I will admit is hard to replicate in the oven. If you want to try it, I combined smooth and grainy Dijon mustards with some olive oil, honey, salt, pepper and dried herbs. I tossed my chicken breasts in that mixture coating it well before I sous vide it at 65C for 3 hours. 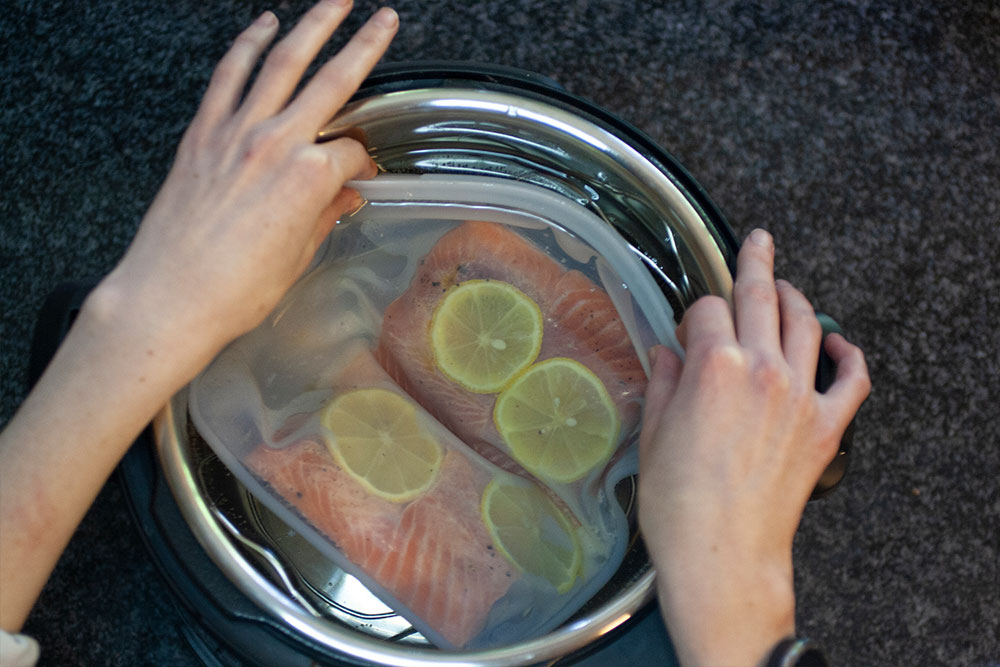 If you’re interested in sous vide, some tips I picked up were:

2. There’s a reason recipes start with filling the Instant Pot with water and setting it and only then prepping the protein, you have plenty time to prep your protein while it comes to temperature.

4. Always go for the longer suggested times to cook. It’s impossible to overcook but quite possible to undercook.

5. The best way to test if something is ready is by look and feel not with a thermometer. The internal temperature will never exceed the temperature of the water, which in hindsight seems logical. I made the mistake of checking temperature for doneness and thinking it was raw when the temperature stayed below 60C. However, when I sliced into the chicken it was obvious that it was in fact cooked.

6. This is the most useful sous vide timing guide I found.

7. If you plan to sous vide often, a vacuum seal is probably a smart investment.

How much is the Instant Pot Duo Plus?

The best price I could find it for right now is R2695 here, down from it’s recommended R2999 retail price.

Would I Recommend the Instant Pot Duo Plus?

Yes, absolutely. The Instant Pot as an appliance is a useful and practical addition to your kitchen and will be used often.

If you have the Instant Pot Duo and are thinking about upgrading I would ONLY suggest that you do if you are specifically looking for a sous vide machine, as it’s the most affordable sous vide option and it gives you more than just that one use. I have never used a sous vide machine, so cannot compare how they work to an Instant Pot Duo Plus, but they retail for over R2000 which for an appliance that can do just one thing is a lot.

WIN AN INSTANT POT DUO PLUS

Thanks to Instant Pot South Africa, we’re giving away one Instant Pot Duo Plus. To enter follow us on instagram @nutreats and enter under this post. 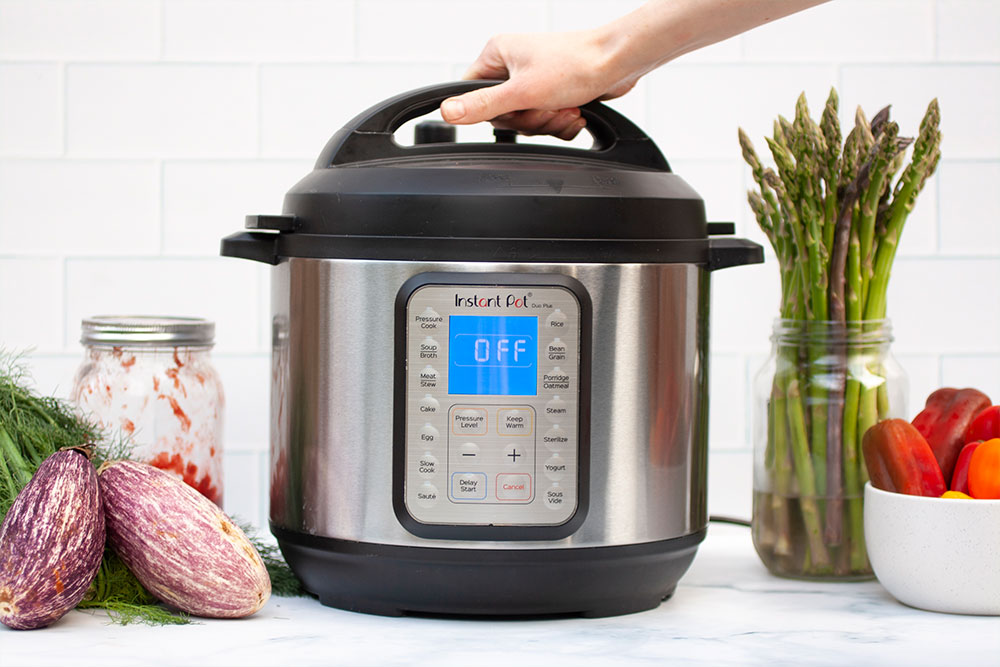 Instant Pot South Africa sent us the Instant Pot Duo Plus to test out. This article was not sponsored, pre-viewed or pre-approved by Instant Pot. Opinions are our own.

On Our Bedside Table: A little French Restaurant, a Beetle, an Attic, Three Liars and Girls in trouble