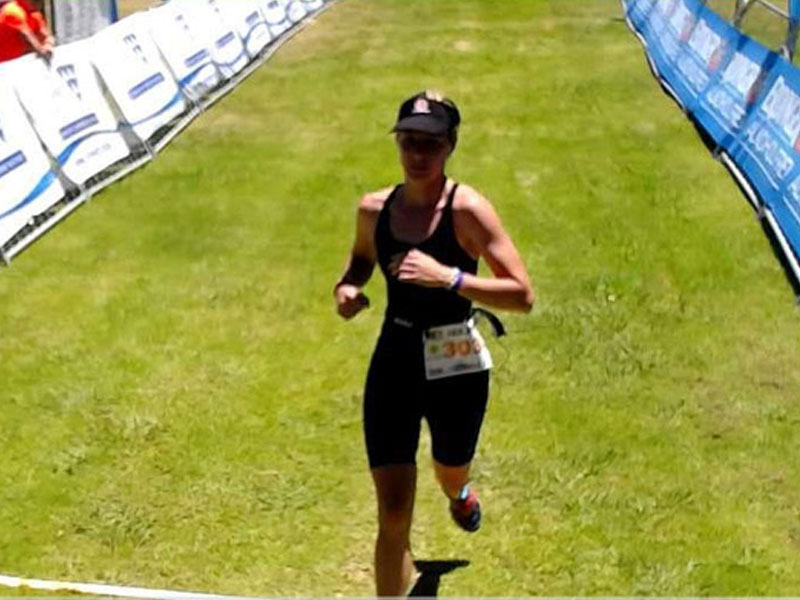 3 Tips to Eat Healthier over the Festive Season

If I have one piece of advice for you, it would be, WEAR SUNSCREEN. Summer is here and Triathlon season is upon us! The Jailbreak Triathlon is a great beginner Tri, well it was my first TRI so, to be honest, I do not have a massive amount to compare it to, but it was a good way to have some good clean fun!

That being said, training makes the races more fun (you don’t hurt as much) so I would also recommend just a leeeetle more training than I did. (I really need to learn to practice what I preach) because my arms are so sore I can barely type this 🙂

The Slanghoek valley in summer is, one word: Hot! There is always a little wind funneling through the valley, sometimes a lot of wind – but thankfully race day was a little blustery and that’s it.

The venue change had absolutely no impact on the race itself only on the concept of “Jailbreak” (escaping the maximum security prison) but the Slanghoek venue is breathtakingly beautiful and set up well for a great day out.

A big well marked field with plenty parking and there was no waiting around or in any queues to get ready and started.

No water tables on the swim of course 🙂

There was 1 water table on the cycle (at the top of a big hill so the perfect positioning I think).

3 water tables on the minimum run and 5 on the maximum run. Water and coke for those exhausted runners in the midday sun!

Safety is the biggest concern in Triathlons. There were loads of lifeguards following us on the water who were always ready to give us a nudge if we were going completely off course.

The cycle is a big circle so you can’t really go wrong but it is on a road that has cars on it, so there were plenty of marshals out there to ensure all the cars are aware of us cyclists.

The run was perfectly marked and covered in marshals, which was great because I needed some encouragement along the way just like many others did. 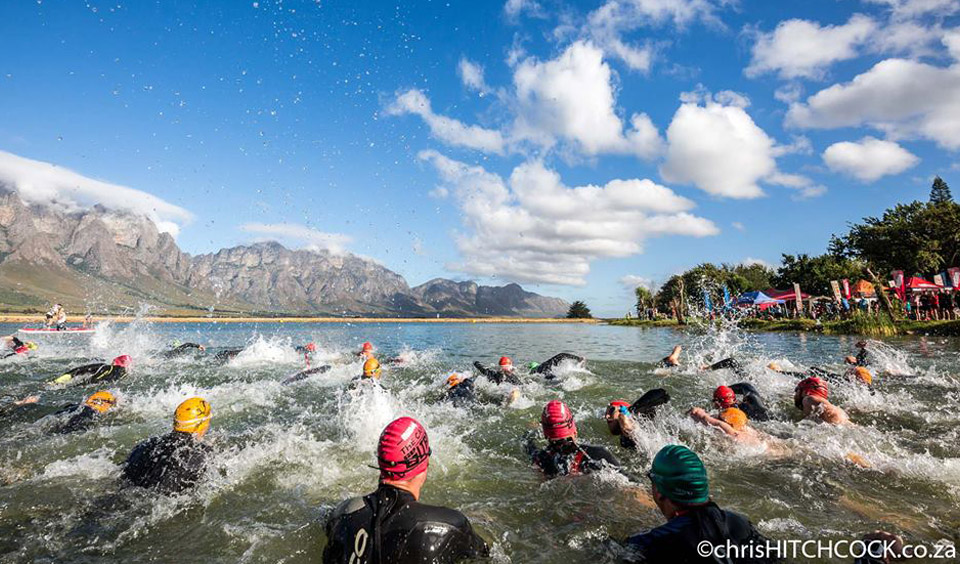 Getting into the water as a warm up was honestly the first time that I had been submerged in my new wetsuit. Yes this probably isn’t the best start but who am I if not unprepared.

To be perfectly honest, the water was warm enough to not warrant a wetsuit, but everyone else had one and I didn’t want to feel left out.

The route was 2 laps of 650m, the countdown happened and we were off!

I had not done a lot of open water swimming, and none of it was done in the wetsuit BUT, I have swum a lot in previous years and let’s just say muscle memory is everything.

The first 150m were a flat out sprint before I realised that was not the way to go and I started to slow down drastically. The key in a multi-discipline race is to play to your strengths.

Cycling is my strength so getting out of the water exhausted was not going to do me any good. So I started counting. 100 strokes and a 10 stroke breaststroke rest.  It’s amazing how you can distract yourself so easily by turning your mind to other things.

Lap two sailed by without a hitch, well I did get kicked in the face a few times when I almost swam over someone and had to change course a few times because I seem to be incapable of swimming straight… Pretty sure I swam 1.4km’s and not 1.3km.

Otherwise no hitches really… and then I was out of the water. I came out the water 21st in my category out of about 100. A little struggle out of my wetsuit and a chocolate bar stuffed in my mouth later and I was ready to sit down for a while (on my saddle that is). 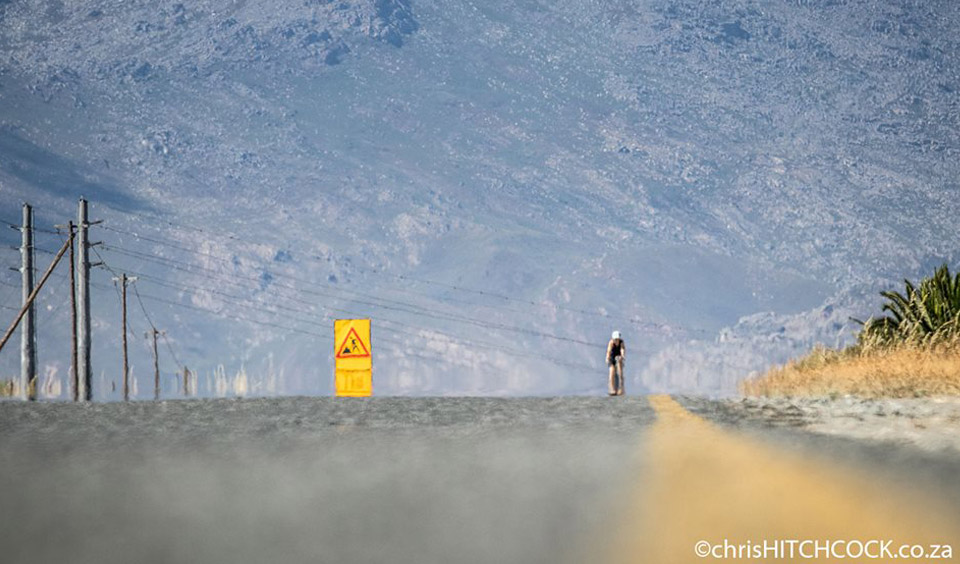 This is my place, this is where I am home. I started off nice and slow to warm up but the first half of the course is slightly downhill or flat, so soon I was flying! My hamstrings were shouting at me a little but with the course so spread out you could see the next person ahead of you and my competitive nature kicked into overdrive. Around the 30km mark I started passing the back markers of the previous wave. It’s incredible to see the different people that come out to do these races and I ended up having a little chat with a couple on the way up a hill, it was their first Triathlon too and they were very excited to get off their bikes and onto the run. Lots of sore bums on the saddle I think.

A nice long hill reminded me that my legs weren’t used to swimming 1,3km’s but soon I was seeing runners along the course and that meant we were almost back at transition. Now was going to be the hard part – I had made up a lot of time on the bicycle and came into transition in 10th place. I knew this wouldn’t stick, I can run distance but not fast. Diesel engine Tarryn has one pace, and some very tired legs.

Gel time. As I mentioned, I am not used to these super short “sprint” distances so my body is not used to burning so much fuel so quickly. I drank as many electrolytes that I could get in as quickly as I could and got some sugar into my system as well.

The first 3km’s of the run were around the vineyards and as the area is quite dry this was sandy. Beach sandy… this did not help the jelly legs that tend to come after a long bike session. Suddenly I realised why Brick sessions are important to triathletes – to avoid the jelly legs.

I tried the same technique as I did on the swim, to run for a specific length of time and then slow down if I had to for a small rest period. The rhythm soon came but I was just watching the more-experienced girls saunter past me like they were on a Sunday stroll. Oh well, we knew this would happen.

The run was a tough one with quite a few ups and downs. It was a there and back so you constantly had people running towards you which I loved. I ended up knowing a few people there and it was pretty cool to see them and give each other boosts along the way.

55 minutes later and I could hear the finish line – always welcome sounds and I was almost done. It had come and gone so fast… and it was AWESOME, but my body was happy it was done!

I managed 17th in my category (OPEN Women) and I think that’s not too shabby for my first time.

I got a medal for the mantelpiece AND an ice cold Erdinger (non-alcoholic beer). Finishing in the midday sun, this tasted just fantastic. To be perfectly honest I was not super keen on having a beer as I crossed the finish line but when the announcer said it was non-alcoholic… It went down amazingly!

Well, I don’t know if it is a good memory but… 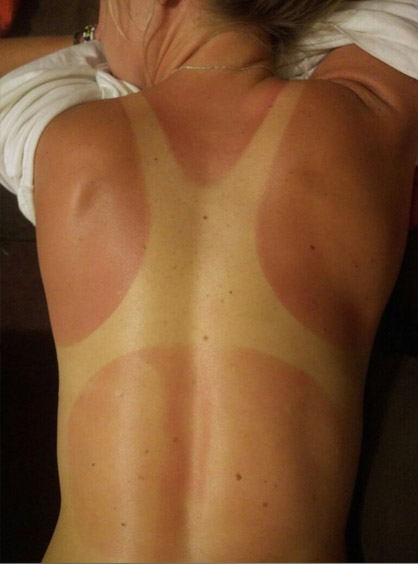 Never forget WATER RESISTANT sunscreen. Mine must have rubbed off in the swim and well – you can see the results.  So every time I walk past a mirror with an open-backed top I remember the day.

But seriously, watching the maximum escape guys do their swim and head off on the run is pretty exhilarating. I love races that let you see the action so much. It is also great for spectators. Especially when a 60-year-old man arrives in his speedo and manages to come out of the water in 5th place!

As for the views, they are pretty darn incredible!

There is a mixture of super hardcore vibes and nervous beginners. Nowadays there are a lot of triathlon training groups and they all come through and set up gazebo’s and make a day out of it. There were also a lot of kids running around supporting their parents and just a general nervous excitement in the air.

I did feel a little out of place when I arrived in my Flannel Pyjamas but was soon into the thick of things setting my bike up and chatting to the other competitors.

Registration was quick and simple and there was plenty of coffee to get you a bit more awake and ready for the day ahead.

Triathlons are not cheap, mainly because there are so many different factors involved. It’s basically three races in one so when you think of it that way the price isn’t too hefty. Especially since the Jailbreak Triathlon race is so well organised.

As a first triathlon, the Jailbreak Triathlon is a winner. It’s great that there is the shorter distance and you are finishing with the hardcore athlete that are always ready to give you a little encouragement boost.

I had such a great day out and the free wine tasting vouchers for the nearby Slanghoek cellars it is the perfect way to spend a Saturday and jumpstart your festive season training. Plus more excuse to eat lots 🙂 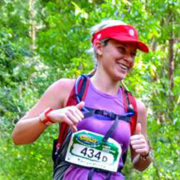 3 Tips to Eat Healthier over the Festive Season