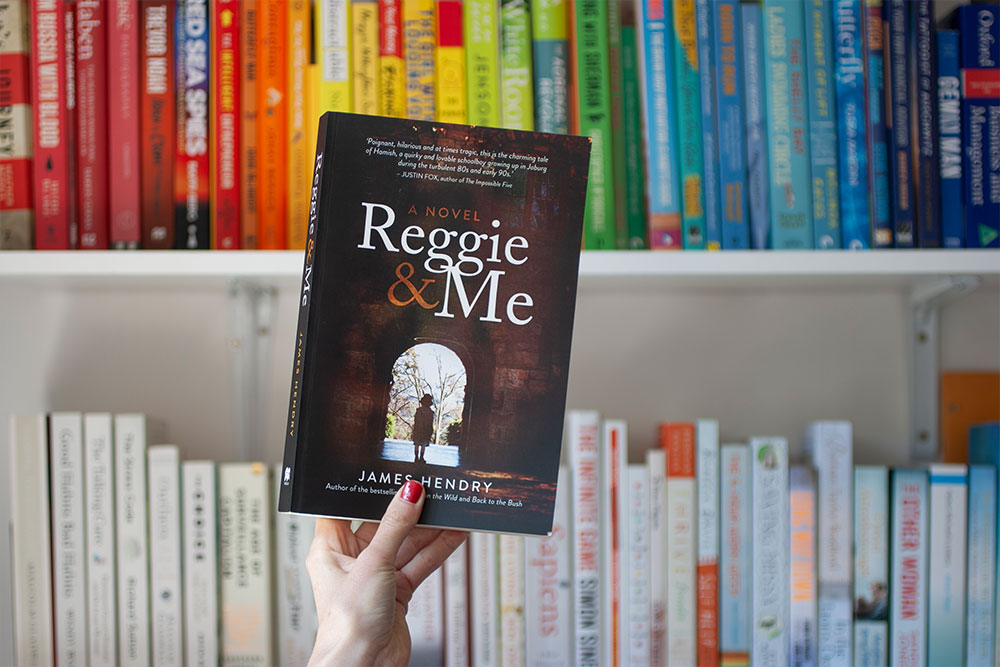 Everything you need to know about The Collagen Diet

James Hendry wears many hats. He is a wildlife TV presenter, wildlife guide, writer, musician, and speaker. He has authored four books, three of them revolving around his passion for the wilderness, one of them – his first novel – A Year in the Wild: A riotous novel – becoming a South African best seller. His fourth book, Reggie & Me, departs from his theme of the wilderness to explore the topic of growing up as a privileged white boy in Apartheid South Africa.

Reggie & Me follows Hamish from birth all the way up to his final year of high school. We see him meet and fall for a girl called Reggie, become a chorister, horse rider, schoolboy actor and dream of becoming a star rugby player and ladies’ man. He is an odd child, an outsider who is growing up in a turbulent country and who has not learnt the rules.

It is a charming book full of complex characters and vivid scenes. In Hamish, James has created a character that you can’t hate, but don’t unequivocally love. His flaws are many, he lacks self-awareness, but his golden heart, and need to fit in shine through making him endearing.

James embraces the time period the book is set in – Apartheid South Africa – and aptly tackles race, class, bullying and slut-shaming in a very real and realistic way. But also, with an innocence that comes from the viewpoint of a little boy who is still very much coming into his own.

After finishing the book, I got a chance to ask James Hendry about Reggie & Me, his writing process, and his favourite books.

What inspired the story of Reggie & Me?

I wanted to write a story about growing up at the height of apartheid. A story about privilege and prejudice that was amusing and accessible to all races and genders; and hopefully makes people think a little while laughing and perhaps crying.

Did parts of your childhood influence the story and characters in the book?

Yes – most of the book is heavily influenced by my childhood. Much of it is autobiographical.

All your previous books revolve around wildlife, why the pivot to writing a novel about a young boy?

My other books have more revolved around people in wildlife contexts. This one allowed me to delve deep into my memories and being a nostalgic sop, I thoroughly enjoyed the process and found it very cathartic. I also find the human species the most fascinating biological entity on earth, so I guess looking at homo sapiens in the social melee of the city was another way of examining it!

I’ve read a bit of your background on your website and was shocked to discover that writing isn’t something that comes naturally and is something you’ve struggled with. That doesn’t come through at all in Reggie and Me, which was a delight to read. How did you train yourself to become a good writer?

I’m not sure that I am a good writer necessarily. There is a great deal of editing that goes into the words that initially come out and this is where the magic of the craft happens. I didn’t read much as a child and I think this made my writing poor and I am not sure that English was particularly well taught when I was a school boy. Practice makes a huge difference and from about 24, I had to write weekly newsletters about the game reserve where I was working. These were diabolical splurges of purple adjectives to start with but my father (whose generation seems to read and write so much more efficiently than my own) slowly and often not-so-patiently helped me learn to write English.

What are your tips for people who want to / have to write but can’t?

Can’t? No. Everyone can I believe. They actually just need to sit down and start. Read Steven King’s ‘A memoir of the craft’. It’s short and brilliant. If there was one thing I was never going to be as a child, it was a writer.

The book ends at the end of Hamish’s school journey with his story barely beginning. Are you planning a sequel?

I’ve so loved the process of Reggie and me that I’d really like to try produce a sequel in the not too distant future. The university years – 1995 – 2000 were a fascinating time in South Africa.

What are you currently reading?

What is your all-time favorite book?

You can find Reggie & Me at most local booksellers now.

Everything you need to know about The Collagen Diet