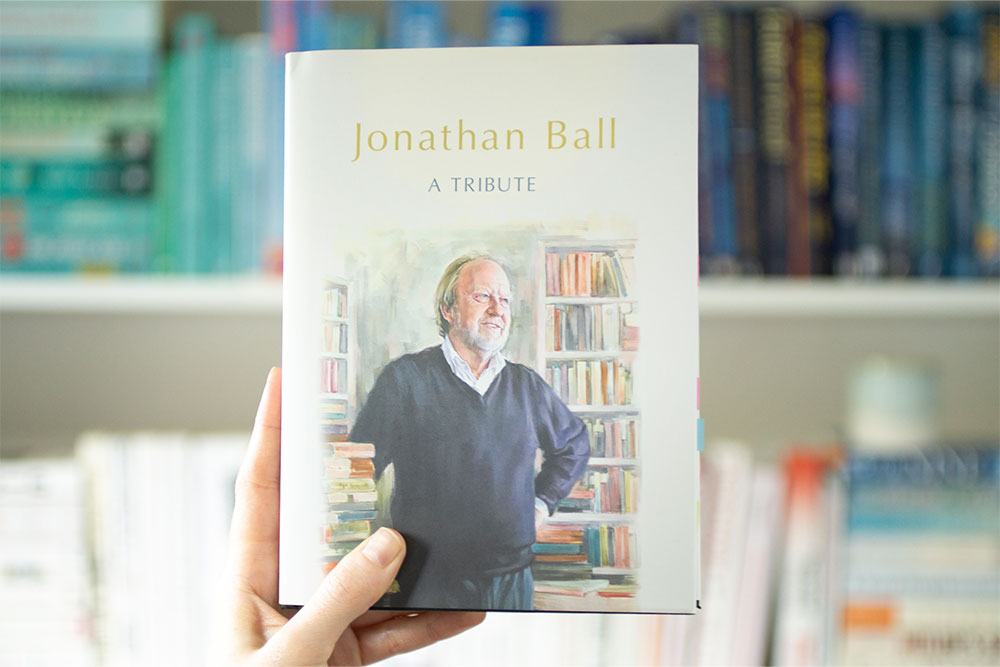 Have you ever stopped to look at your bookshelf and think about the journey books took to get there? Often, they start with a talented writer with the gift of storytelling. But that gift would for the most part never be unwrapped without publishing houses who take those stories, craft them into books and get them from printing press, to bookstore, to your hands.

Jonathan Ball passed away on 3 April 2021 after a short illness, and while he never did publish a memoir, the tribute to him published by his namesake publishing house acts as a memoir of sorts. Through stories and tributes from colleagues, friends, family and authors, you are given insight into this larger-than-life man – both good and bad – and the glitz and grunge of the publishing world. It’s a terrific tribute that leaves one aching for more, wishing that he himself had put pen to paper and told his stories of starting a publishing house in the most unlikely time in South Africa, with a clearly defined mission: “Publishing books about South Africa which enlighten and entertain. Books of liberal sanity which pander neither to the left nor the right nor to contemporary fashions in thinking”

It’s a beautiful tribute and one that gives you a greater appreciation for books and how good books are given life and wings. Below are 4 of the things I learnt from Jonathan Ball, A Tribute, which is available here.

1. He came from a big family and knew early on he would be a household name

Jonathan Ball came from a family with 6 boys and 1 girl. He was the second youngest and at 11 wrote his older brother, David, a thank you note for a present, which included a p.s. that foreshadowed his belief that he would become a household name. It read “p.s. keep that signature. One day it will be famous”. David would later put-up capital for Jonathan to start his publishing company.

2. He was a ferocious reader who loved books

This seems obvious, after all why start a publishing house if you don’t have a love of books and literature; but his love for books seemed extraordinary. His brother David writes about their father’s love of books, the English language and growing up in home full of books. Benjamin Trisk writes about his legacy being in bookshelves across the country “look at your bookshelves. His legacy is everywhere. Here are his children” and Euguene Ashton writes about travelling with Jonathan Ball and learning to bring a second suitcase, just to carry the books Jonathan would inevitably collect by the dozen. Books have the ability to transport readers to a different time, expose them to new cultures, people and ideas. He pushed to not just publish commercially good books (we can thank them for bringing Harry Potter to our shores), but also culturally important ones.

3. He was a good cook and could hold a tune

Many of the anecdotes and tributes included some mention of a dinner party that would often end with a serenade by Jonathan. The type of dinner parties of a by-gone era that make you want to entertain.

The tribute ends with the speech he made when he stepped down from running Jonathan Ball publishers, and it gives you a tiny window into his talented way with words. But it was these two lines, attributed to him, in others stories that stuck with me.

“Inside every fat book is a thin book trying to get out.”