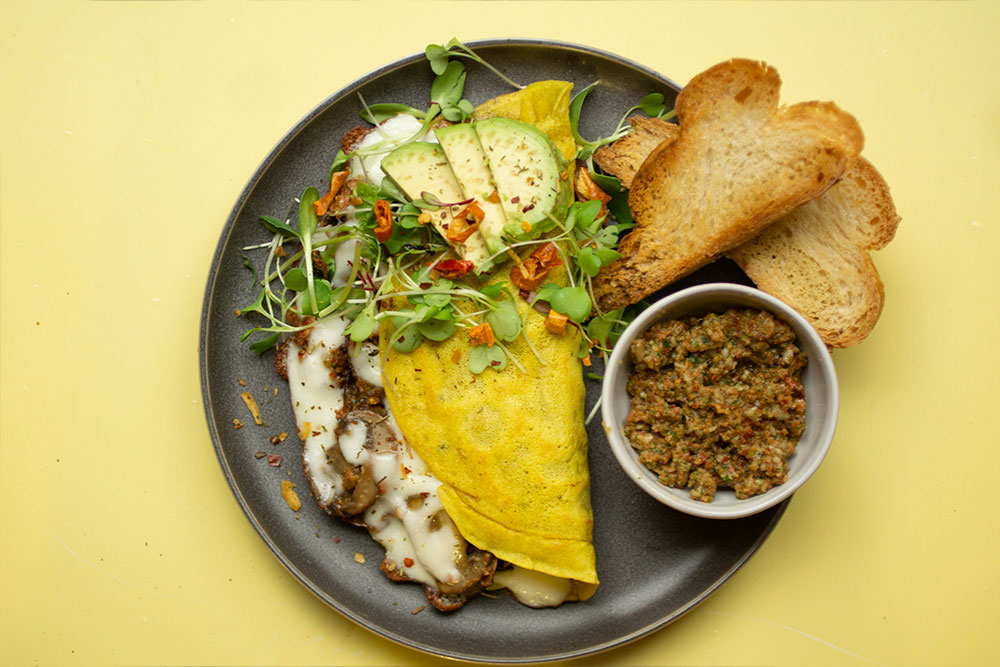 Chef Jason McNamara created The Kind Kitchen brand following his studies in plant-based and vegan culinary arts at the Natural Epicurean Academy of the Culinary Arts. Since its beginning in 2013, The Kind Kitchen has evolved from vegan butchery to restaurant to home delivery meals and a product line, which if you’re in the Western Cape you can order.

Jason’s philosophy is that we all have the power to change the way we treat Mother Earth through the foods we choose to eat and by choosing a vegan or heavily plant-based diet.

The Kind Kitchen Cookbook is a cookbook that sets out to inspire more vegan cooking. It’s a collection of traditional foods, like French toast, nachos, burgers, “meaty” balls and the omelette below that are recreated as vegan dishes using mostly wholefood ingredients, combined with “meat” substitutes. 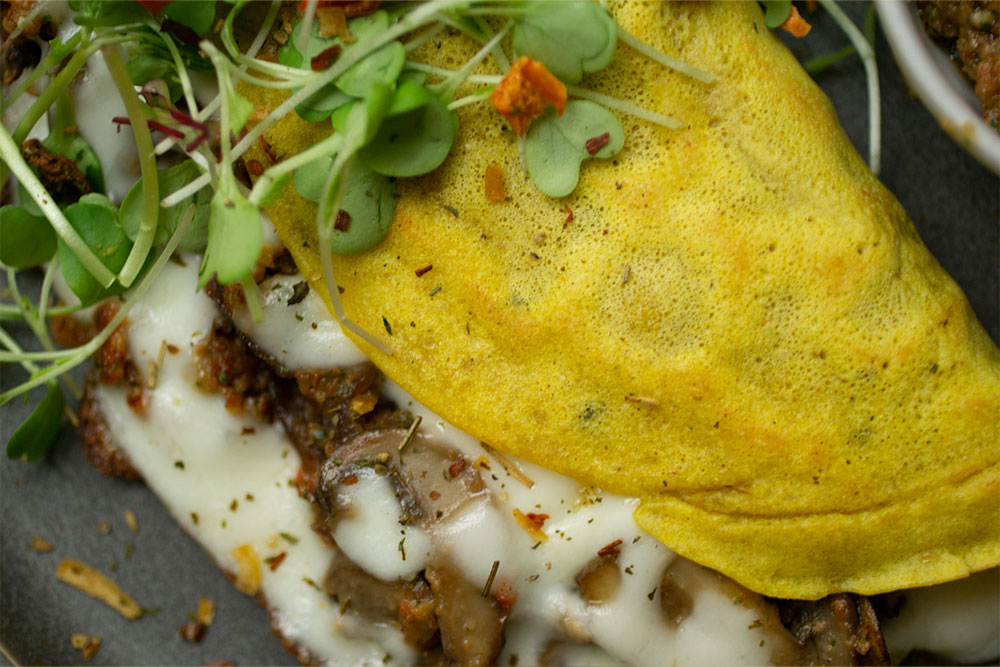 For vegans it provides new and exciting recipes like carrot lox ‘benedict’, a ‘lamb-style’ curry and Jason’s recipes from creating meat from wheat (aka seiten), like a chicken loaf and beef style steaks. For non-vegans it provides an endless array of delicious looking vegan dishes which are achievable to make to inspire more plant-based meals. It’s the perfect combination of classic and exotic dishes.

I’m sharing his vegan omelette du ‘fauxmage’ which is similar to chickpea pancakes/crepes but has the addition of tapioca starch and is served stuffed with vegan cheese, mushrooms and pesto. It’s a heavier dish, which for me lends itself more to a late brunch or early dinner meal than breakfast, and while he lists the serving size as 2 omelets, I got 6 – but I did make them slightly thinner (as they were easier to fold that way). I would say the recipe can easily and happily serve 4 (or 2 very generously).

The ingredients in the recipe are the same as in the book, however the method I’ve included is the method I used after finding the first try a little too thick. My suggestion is to cook them the same way you would a crepe/pancake. The batter was very thick so it didn’t lend itself to cooking it like a thin crepe. The recipe also calls for ½ cup of batter and although it came out very well, it was a very thick pancake (or flapjack, depending on your origin) that couldn’t fold.

The last note is on the black salt he uses – it is kala namak and has a unique sulphuric quality that gives an authentic egg-like smell and taste. It is available here. I did not have any and thus did not use it which means that my omelette tasted more like chickpea flour and less like egg.

The Kind Kitchen by Jason McNamara is published by Penguin Random House and is available here. 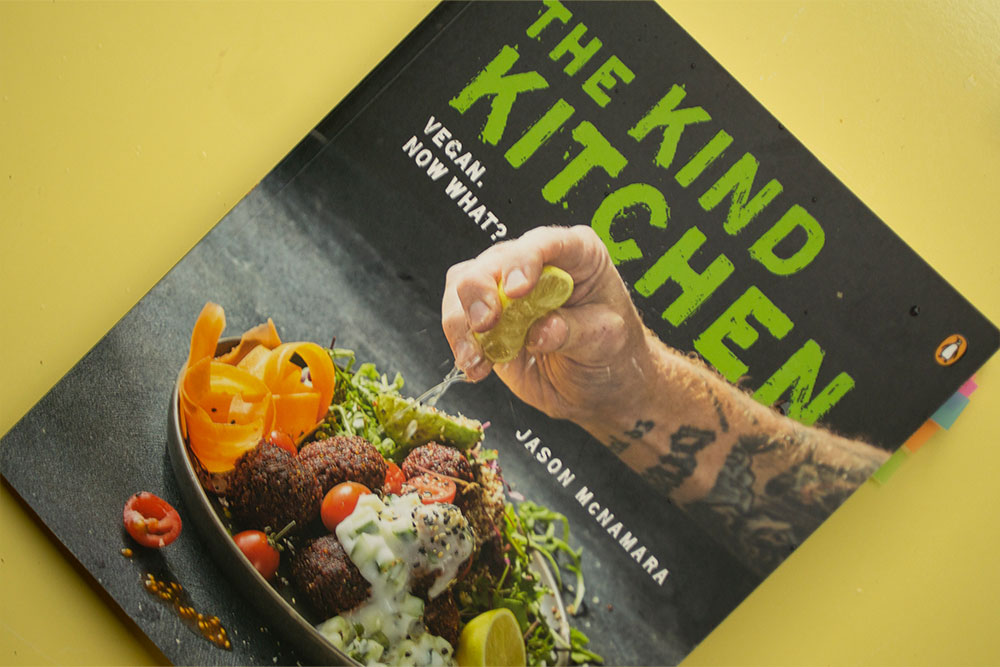 To make the Omelettes

The black salt used in the omelettes is Kala Namak which is a black salt that has a unique sulphuric quality that gives an authentic egg-like smell and taste. You can find it in Asian stores. 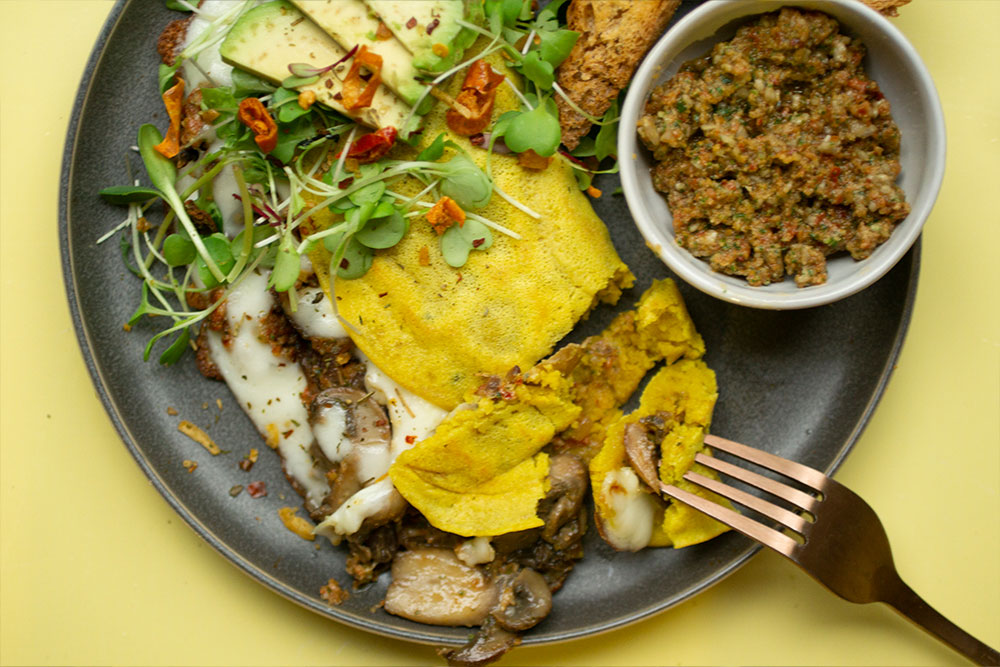