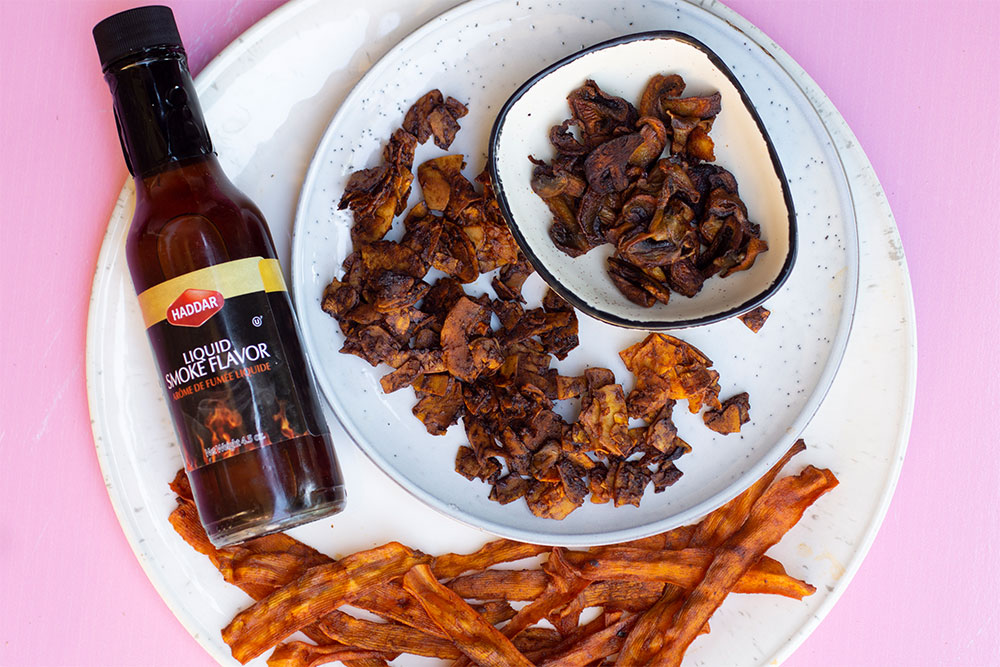 Liquid smoke is one of the most controversial condiments. Culinary experts view it in the same way coffee snobs view instant coffee – a sorry excuse for the real thing. It has also come under fire for its safety and potential health pitfalls. And yet, it has had a resurgence in popularity and those who use it will tell you that it adds a delicious smokiness to sauces, proteins, and vegetables with little effort.

So, what is liquid smoke and how do you use it? Let us explain…

As a teenager, Ernest H. Wright worked in a print shop that used a stove pipe for warmth. One day he noticed a drop of liquid trickling down the stove pipe and as one does, tasted it. It tasted like smoke. Years later, in 1885, Wright, now a pharmacist, had the realisation that smoke condenses when it comes into contact with cold air. The condensed liquid tastes like smoke, and thus, the ingredient Liquid Smoke was born.

In its early days, Wright made Liquid Smoke by burning hickory wood, channeling the smoke produced through a condenser, collecting the droplets, bottling the thin brown-yellow liquid and using it as a preservative. He sold it and people fell in love with the taste. It is still made by burning a hardwood and condensing the smoke, but now, it is processed to removed impurities. Some brands use different hardwoods like oak, chicory, pecan and apple wood, and add in ingredients like salt, sugars and vinegars. However, you can still buy the OG Wright’s Liquid Smoke which is just smoke and water.

But is Liquid Smoke Safe?

The health concerns around liquid smoke have centred around DNA-damaging carcinogens which it is accused of containing. Liquid smoke contains polycyclic aromatic hydrocarbons (PAHs), a family of chemical compounds, of which some have been linked to carcinogenic effects and DNA damage. However, it is made with controlled smoking and goes through a filtration process to remove most of those compounds.  Furthermore, many nutritionists believe that the concentrations of these molecules in liquid smoke are far too low for any genuine health concerns. In addition, it is not a condiment that is used with abandon. It is used in drops – a teaspoon or two per recipe, not by the bottle.

How do you use it?

Smoking is a cooking technique often used to cook proteins. Wood chips are added to a smoker or a braai to impart a smoky flavour to the protein. As explained in The Flavour Bible, ‘adding a smoking component adds a ‘meaty’ flavour to a dish. It can also help counteract the richness of certain meats and seafood.’

Liquid smoke is a fast and cheap way to get that smoky flavour, which is why those in the culinary world hate it – it is a shortcut to achieving a slow smoked dish and like most shortcuts, it doesn’t measure up to the real flavour. However, while it may not be the best way to add smokiness to meat or fish, where it does shine is when it is added to sauces, vegetables, legumes, and even caramel, to get a smokiness you otherwise wouldn’t be able to achieve.

Whilst I have never had bacon so cannot vouch for the flavour matchup, I can vouch that liquid smoke added a delicious smoky flavour to the carrot ribbons, mushrooms, and coconut ‘facon’ versions below.

I made one liquid smoke paste and used it to coat carrot ribbons, mushrooms, and coconut chips. This mix would also work on eggplant strips or cauliflower ‘steaks’. 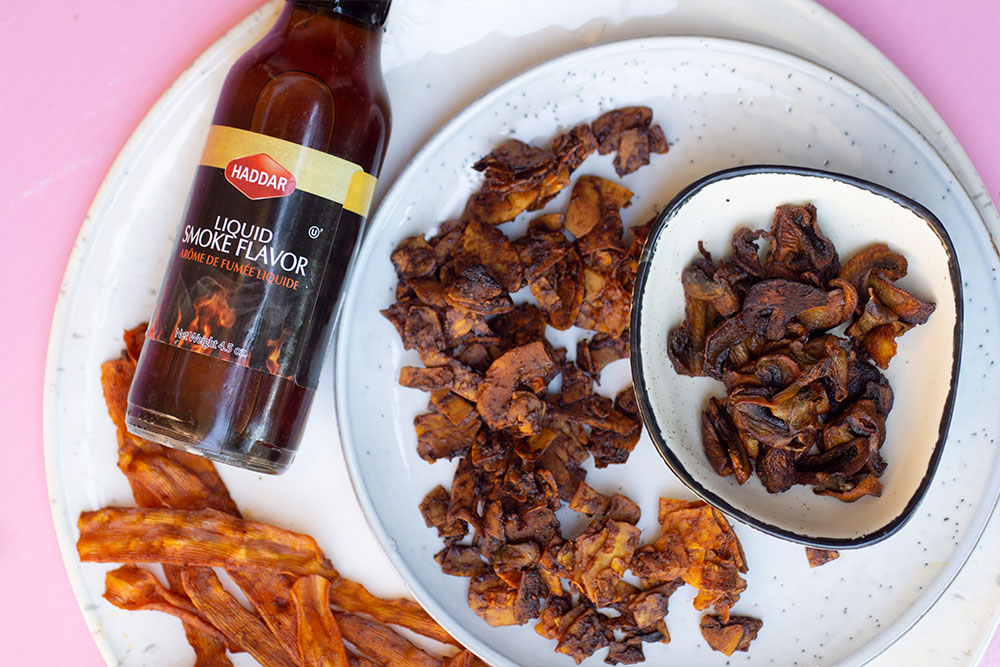 Add all the ingredients together and mix well.

Use it to coat either;

125g /half a punnet mushrooms, sliced

Spread either the carrot ribbons, sliced mushrooms or coconut chips on a lined baking tray.

Bake the carrot ribbons for 10 minutes, turn over and cook for another 5 minutes.

Cook the mushrooms for 10-15 minutes, until dried out.

Cook the coconut chips for 10 minutes.

You can serve any of the above in salads, sandwiches or as a snack. The carrot ribbons are my favourite.

Where to Find Liquid Smoke

The one I used is by a brand named Hadar, but was procured from the US. Locally, there is a brand called Smoked Flavours which has a variety of liquid smoke made from different types of hardwoods. Smoked Flavours is made with just smoke, water, and a binding agent, making it the most natural version. It is also vegan and kosher certified. 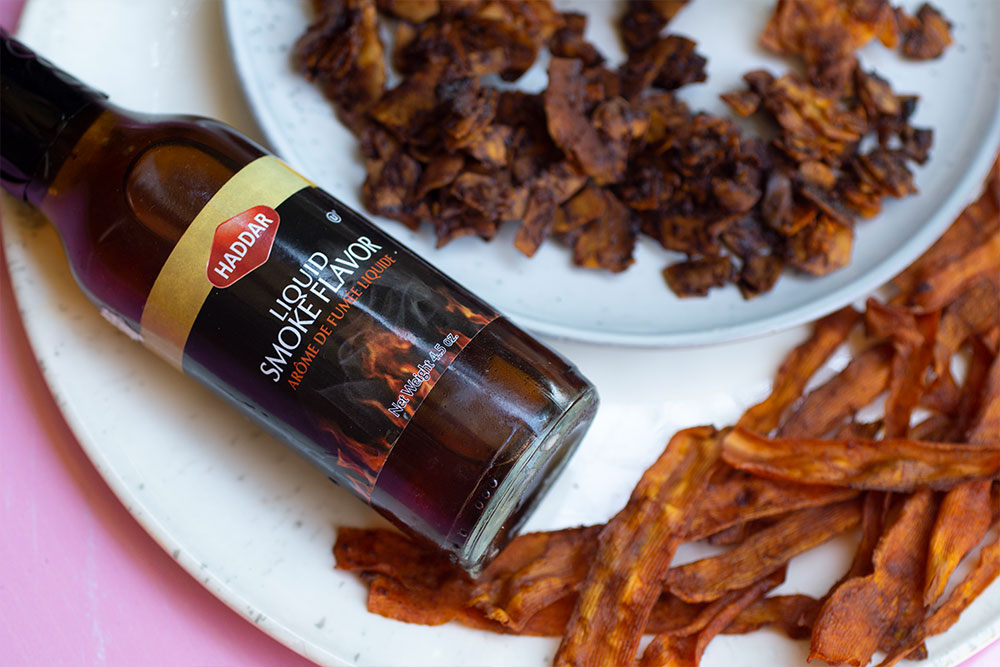 Inside ARC: The Beauty Destination That Allows You to Interact with Beauty on your own Terms

Let Us Explain: What is Monk Fruit

Let Us Explain: Zero Waste vs Recyclable vs Biodegradable vs Compostable vs Reusable

Let Us Explain: How to Use A Foam Roller