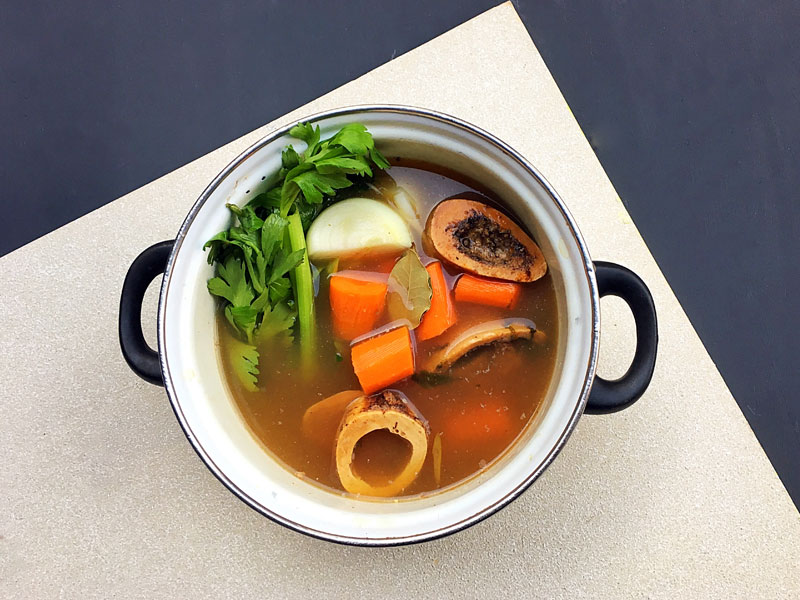 June Shopping Guide – You are what you eat

Bone broth, like many “new” health food trends originated thousands of years back, to a time where you wasted nothing; and so bones were turned into nutrient packed broths.

Bone broth is said to be a magical elixir that can help repair a leaky gut, improve digestion and IBS, help with aching joints, increase energy and help with weight loss.

There are people who go on bone broth diets, those that use it as a snack in between meals, those that will add some broth to just about anything (smoothies included) and some even replace their morning cup of coffee with a steaming cup of bone broth.

Some Doctors are unconvinced as to the power of bone broth to heal; but they do agree that it’s not bad for you and can be quite nutrient rich – they just don’t think a cup is a cure all.

But if you like to try new things, bone broth is a great starting point – it may be time consuming but it’s not difficult and it’s inexpensive to make.

To make the bone broth below, I consulted this recipe as well as these common mistakes people make when making bone broth to make sure I wasn’t committing any brothing faux pas.

It took just a little over 24 hours from start to finish, but only about 2 hours of that was time spent in the kitchen actually making the broth. It practically makes itself while you sleep.

You can make it in a large pot over the stove, a pressure cooker or slow cooker. I chose a slow cooker which is the easiest and most convenient option as you can throw everything in and leave it for hours without worrying. I used a large slow cooker, if you have a small one halve the recipe – it needs a lot of room (and cooking it in a pot that’s too small is one of the big mistakes one should avoid). 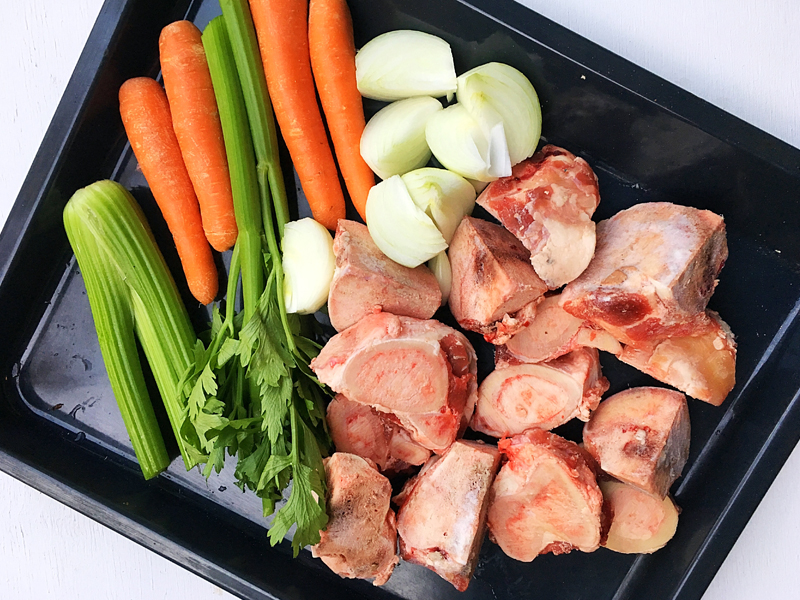 Makes about 2 litres of broth

3kg bones – You can get bones from your butcher, just ask for bones to make a broth. You can choose any bones you want – recommended varieties include beef, bison, chicken, duck, lamb, turkey and pork. I used a mixture of beef bones and chicken bones as well as a small pack of marrow bones.

Salt and pepper, to taste

1. Blanch the bones. Add the bones to a large pot and cover them with cold water. Bring to a boil, and let them cook at a strong simmer for 20 minutes. Drain

*Note: This step is optional and not in many recipes. According to Bon Appetit, failure to blanch is the number one mistake people make when making bone broth. Blanching helps remove the “nasty” bits from the bones. I noticed that during blanching a lot of scum rose to the surface which I was able to drain off. But when it was cooking in the slow cooker, there was no scum at all which meant that blanching made it easier to cook, as I didn’t have to come back and remove scum from the broth every few hours.

2. Preheat the oven to 200°C and cover a pan with tin foil. Arrange the bones on the sheet and roast for 1 hour, turning the bone half way.

*Note: Roasting helps develop a better flavour. If you have a lot of browned bits stuck to the bottom of the pan after roasting, loosen with water and add to broth.

3. While the bones are roasting you can chop the vegetables. Chop them in large chunks so they don’t disintegrate.

*Bon Appetit warns against adding too many extra ingredients – the star of the dish is the bones. If you don’t like sweet things you can omit the carrots. I included them and regret it not one bit.

4. When the bones are roasted add the bones and vegetables to your slow cooker. Add the apple cider vinegar (which helps extract the nutrients) and a bay leaf. Cook on low for 12-24 hours. Check the slow cooker every few hours. If any scum collects on the top – remove and add water to cover the bones.

5. The stock is ready when it’s dark and flavourful. I let it cook for 24 hours. Warning, this is super fragrant and the entire house will smell like it.

6. Remove the bones and vegetables (wrap them in a newspaper and throw away). Strain the liquid through a fine mesh sieve. If you want a very clear and thin broth you can strain it again through a cheesecloth. I found one strain was good enough.

7. Once it’s strained, transfer to jars or containers and let cool before refrigerating. According to Bon Appetit, it’s best to let it cool as fast as possible, so transfer into a container that has a large surface area so it cools faster. This prevents bacteria coming in.

8. You can keep the bone broth refrigerated for 5 days or in the freezer for up to a month. When it cools, it’ll form a layer of fat on the top. You can scrape it off and either use for cooking (I did not) or throw it out (I did). It also turns into a jelly like substance once cool. A sight you should welcome as that means you’ve done it right.

You can warm it up and drink alone, add it to soups, sauces or even cook absorbent grains like quinoa in it to soak up the goodness. You can also apparently use it in smoothies – but I’d rather put a cauliflower in a smoothie than broth. I used mine to add to vegetable soup as well as a broth for a soup similar to this one, which came out great. 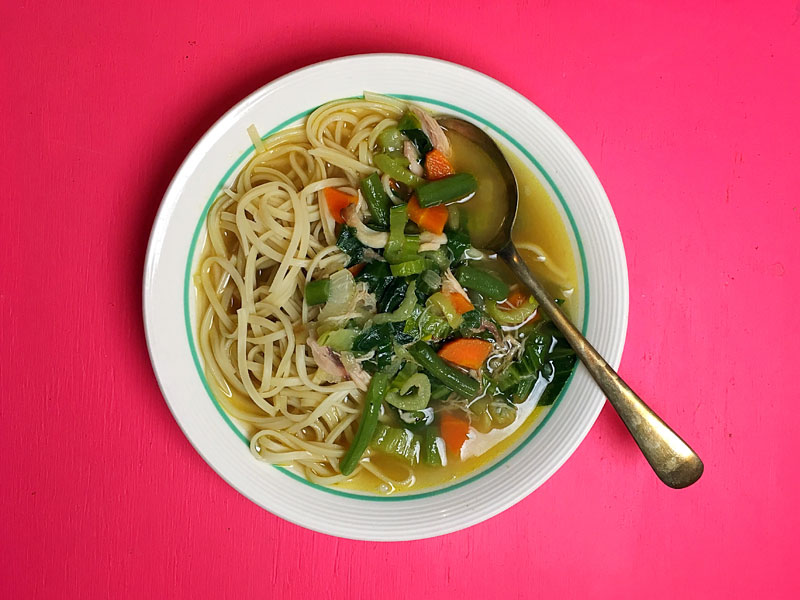 June Shopping Guide – You are what you eat

How to Use up a Whole Chicken (for multiple meals)

Food, In the Kitchen, Nutrition, Recipes

How to make the Perfect Oven Baked Fries