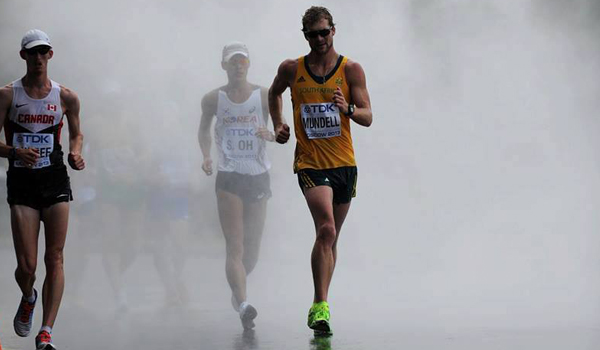 My first memory of the Olympics is watching the Atlanta Olympic Games in 1996. My strongest memory from those games: – Gloria Estefan, in a white dress singing “Reach” at the closing ceremony.

While I was concentrating on the dress, a 12 year old Marc Mundell was watching the exact same games and deciding that he would one day be an Olympian.

“Since I was 12 years old watching the Atlanta Olympics I decided that’s what I wanted to do. I didn’t know the sport or event. I didn’t know those details, but the passion and dream was always to get to the Olympics”.

It was around that time that Marc; inspired by his father Oliver Mundell who represented South Africa the IAAF Race Walking Cups in 1993 and 1995 post isolation; took up race walking.

A natural athlete who played at provincial level in five different sports in primary school and was competitive in the post-apartheid white league, Marc found his niche in race walking.

“As soon as it became demographically balanced in 1995 I just wasn’t fast enough or quick enough and walking seemed to be the right niche. I decided at university that walking would be my thing. I focused solely on athletics and walking in particular.”

Marc Mundell left high school, known as the boy who would one day be an Olympian and headed to TUKS University in Pretoria, where the best race walking coach was located, to pursue his Olympic dreams.

“I’ve got shirts from when I was younger….on which people wrote ‘Look forward to seeing you on TV at the Olympics’”

Marc credits his parents for the sacrifices they made to allow him to pursue his Olympic dream.

“My parents sacrificed everything they could to get me into sporting teams, they got involved. Whatever my passions were, they became their passions…It was really expensive for them. I come from two teachers. They sacrificed, they did what they could. I’m in huge debt to my family and hopefully to my children one day I’ll be able to give them the same opportunities.”

It would take years, ups and downs, a career changing switch of distance from 20km to 50km and a new coach for those sacrifices to pay dividends. In 2012, Marc Mundell was selected to go to the London Olympic Games, breaking through enormous barriers and quite literally putting South African race walking back on the map. He was the first South African race walker to get to an Olympic Games since 1960.

The 2012 Olympic Games goes down as one of Marc’s favourite racing memories as he recalls;

After London, Marc started focusing on his next goal which was not only getting to Rio but doing well.

“London was the hype and vibe, now it’s the performance”.

“That’s the most exciting and rewarding thing. I was able to stay long enough to make the sport better and left it in a better place than I found it.”

Like he has done since his high school days, Marc has prepared by surrounding himself with all thing Olympics: Like-minded people and those who support his dreams.

“If people aren’t congruent with my goals, I have to make a sacrifice. I’m going to look back on my career and say there are a lot of people I didn’t spend enough time with, but I’m also going to look back and say I made every sacrifice to try and be the best athlete I could be for a limited period of time in my life.”

“You walk down and see all the athletes who come and train here [at the HPC] and there are dozens of athletes all training, all sacrificing…these are people who are active, people who want to pursue something and that’s why this is such a great place for me and why so many international athletes come out and train here because it provides that platform and interaction. If you sit here long enough you have a chance of meeting Olympic medallists…You can’t fabricate that. It’s just about people choosing this to be their home and that’s what so special about this kind of environment and that’s why people go on training camps to be around like minded people.”

Despite this positive environment, Marc Mundell’s road to Rio has not been without drama. Last year he made one of the biggest career moves and sacrifices – leaving his job to become a full time athlete.

“I wanted to be able to go in search of that top 10 at the Olympics and with working full days I wasn’t training optimally. My coach said to me ‘To be the best you can be you need to do this. You won’t look back in a couple of years and say I’m so glad I worked that year, you’ll say I’m so glad I took this time off to compete at this level’”

A rock solid plan was shattered in March this year, when Marc caught tick-bite fever, which took a huge toll on his health, training and altering his plans of going away to a training camp in Switzerland.

“I was in great shape, came back March and picked up tick bite fever and got even more sick and it’s been an uphill struggle to get healthy again. It really smashed my body quite horrendously. There have been numerous days when I wanted to give up and others when I knew I’d make it. It’s been an emotional roller coaster.”

Now his revised goal is delivering the best performance he’s capable of on the day and attaining a new personal best.

“If I can get back into the form I was in March that would be wonderful. Coming close to my personal best will be what it’s all about. So much about competing at international level is about achieving your PB given the day and circumstances and if I can come away with a one second PB I’ll be satisfied.”

He may only be looking for a 1 second PB on his previous best time of 3:54:12, but when you’re competing at Olympic level it means training 6 times a week averaging between 130km and 150km a week with at least two sessions per day as well as some cross-training and gym work.

When it comes to diet, Marc tries to cut out sugar and avoid gluten due to intolerance and lists a T-bone steak with potatoes as his favourite meal.

Heading into Rio he’s not only excited to be surrounded by world-class athletes and be able to share the experience with his wife, Joanna who will be accompanying him; but he’s very well aware of the responsibility that being a South African Olympian comes with.

“For me it’s a huge responsibility to be a role model to the next generation of athletes who are trying to get there and to try and inspire others.  It’s a huge responsibility for me having an opportunity to compete at the Olympics where so many people who went before didn’t have the opportunity. That’s a huge burden and weight. Not only on me but on all the Olympian shoulders of this generation that take it for granted to go to the Olympics and who weren’t hampered by apartheid south Africa. Many of the people of my parent’s generation and even slightly younger never had the opportunity, never dreamt of that and that’s what makes it so special. That makes it a huge responsibility that I think all athletes need to be aware of…I think a lot people are too young to appreciate it. They’ve never had or known that…I think it’s stronger for me because irrespective of whether my dad was good enough, it was never something that was possible for him. I’m old enough to appreciate that now, where a couple of years ago I probably wasn’t. That’s a huge responsibility.”

Heading to Rio, Marc Mundell will be taking the responsibility and his coach and mentor Jamie Costin’s advice:

Team SA for the Rio Paralympics 2016