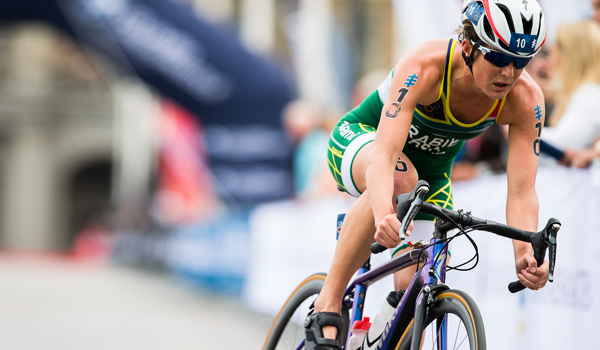 When Mari Rabie was a little girl, Elana Meyer gave her and her sister a pair of Mizumu shoes. To her sister’s horror she went around telling everyone she was running in Elana’s shoes. By age 10 she had decided that when she was older she too wanted to go to the Olympics

“At age 10 my “when I grow up” oral at school was to be like Elana Meyer and go to the Olympics.”

Mari Rabie comes from a family of athletes. Her father is a 2:16 marathoner; her mother played provincial level netball and tennis; her sister represented South Africa as a junior in cycling and triathlon; and her brother is on the South African water-polo team.

“Sport has always been a part of my life and I always did it alongside school, university and working part time.”

In 2005, at the age of 18, Mari Rabie raced her first World Cup Event. She has spent the last decade flitting in and out of the sport depending on her academic schedule and health.

Aside from competing in triathlon events at a competitive level, Mari Rabie has an impressive academic career. In 2010 she won the very prestigious academic scholarship, a Rhodes scholarship to study at Oxford University. There, she completed her MSc in Applied Statistics in 2011 and an MBA in 2013. She also works part-time as an Executive Assistant at South African investment giant, Remgro Limited. And in 2014 she co-founded the athleisure brand “Move Pretty” together with Annelize Kotze.

Balancing these aspects has not been without difficulty and sacrifices, with certain pursuits taking priority at varying times.

“It is all about balance, I think it heavily depends on having good structures in place. Also the more demanding the academics become, the more your sport will suffer. I did not race well while I did my two master’s degrees at Oxford. You simply cannot do both well at such a high level. I did however keep on ticking my sport over, as I knew I wanted to return post-Oxford.”

Mari credits her co-founder Annelize as the one who does most of the work right now and admits she needs to be constantly busy.

“I suppose it is what makes you tick. I need to be busy and rather be working on something than spending time on social media.”

Mari likens qualifying for the 2016 Rio Olympics to burying a skeleton.

“For me personally it was getting rid of a skeleton (Beijing was a disaster). I finished my last MBA exam the weekend that the 2013 World Triathlon Championships was held in Hyde Park, London. A friend, American Rhodes Scholar, Justine Schluntz (NCAA Sportswoman of the year 2010) made the trip from Oxford to go watch the race. Some of my friends from racing the circuit before were still racing and when I told them of my plans to come back to triathlon the responses mostly went something like ‘Forget it Mari, the sport has moved on, you won’t be able to make it again’. I remembered walking away and Justine told me not to listen to them, to prove them wrong. “

And prove them wrong she did, despite battling heart health problems, which caused her to miss 10 out of the 24 months qualifying period, Mari managed to qualify.

“I guess I had my own doubts too, so it felt great to achieve something that seemed impossible at the time.”

To help pass the time she was forced to sit out due to injuries and health, Mari turned focus on her many other interests.

“I always try and focus on something else…my heart damage was the hardest to deal with as I could do NO training at all – so instead I worked more and wrote one of my Actuarial exams.”

To get into Olympic level condition, Mari trains 7 days a week, doing two sessions before lunch and another two in the afternoon. Hard intervals are her favourite workout, which makes sense seeing as she lists the man who first broke the 4-minute mile barrier, Roger Bannister as her sporting role model.

“I like hard interval runs, especially when I am running well. Running fast is one of the best feelings in the world.”

When it comes to diet, Mari cuts out sugar and alcohol, opting to eat clean, choosing salads and a good South African venison steak as her favourite meal.

“I try to eat balanced to fuel and  refuel for training. Sugar is an absolute no-no as well as alcohol. You generally just feel better when you eat “clean” too.”

Going into Rio, Mari Rabie is using her past experience in Beijing to her advantage.  Looking forward to a good fair course and hoping that Rio trumps her favourite racing memory.

“Winning the South African U12 Boys Cycling Time Trial Champs [is my favourite racing memory] – the boys didn’t want to stand on the podium with me. Hopefully RIo will trump that memory.”

Whatever happens, Mari Rabie is living the best piece of advice she’s received.

“Do things that will make your life more interesting.”