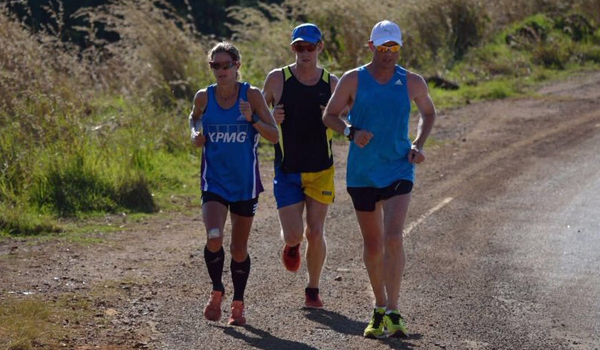 Remember Caroline Wostmann’s climb up the Comrades ladder? She ran Comrades for the first time in 2009 with a very respectable bronze finish time of 9:17:39. Six years later, on her 5th run she won the race, surprising everyone and taking South Africa’s road running scene by storm.

Chris Cherry, (like Caroline) was never a runner. He took on Comrades in 2015 for the very first time and finished in a speedy Bill Rowan time of 08:24:07. This year he returned for his back to back and finished in an astounding 6:25:45, cutting almost 2 hours of his time and ‘breezing’ past Caroline in the 88th kilometre.

It is difficult to not make comparisons.

“When Caroline did so well in 2014, finishing 6th, I was suddenly inspired. I’m not sure exactly what it was, except that her journey had made me question whether I could do it too. I think many South Africans have the same feeling.”

Chris Cherry may have not come from a running background but he was most certainly sporty. Both his parent’s enjoyed exercise and encouraged him in his sport.

“I’ve enjoyed playing sport since I was a youngster, particularly cricket, which was always my focus during my school years at Pretoria Boys’ High. Despite cricket being my passion I squeezed in a few other sports, including hockey and cross-country.”

He even tried his hand at rugby for a year. “After some heavy tackles I realised I wasn’t quite built for it.”

Due to the time constraints that working part-time during varsity delivered, Chris switched to squash which he took quite seriously. “The general consensus amongst the squash fraternity is that long-distance running makes you slow.”

Despite his focus on other sports, he began to foster a love for running during his time at boarding school. They had weekly compulsory House runs in preparation for inter-house cross-country in which he “Did quite well, but not brilliantly.”

“We had a sort of dorm punishment/team building where we had to do intense exercise at insanely early hours of the morning. I hated it at the time, but it definitely gave me a fitness boost and the cross-country actually started becoming enjoyable. I began to love running, but mainly as a form of stress relief from the books and for general fitness to help me in my other sports.”

He calls grade 10 his running peak. “I managed to sneak into the top 10 in the Joburg league races on a few occasions.”

His running post this ‘peak’ was on an ad hoc basis to stay fit for squash. “Twice I got roped in by Caroline to run 21km races which I managed in about 1h40.”

Chris only ran his first marathon in November 2014 and finished in an incredible 3:09. The story is a classic tale that leaves you screaming, ‘I hate runners like that!’ (hate = insane levels of envy).

When you inspect his sporting history, his performance makes sense. Contrary to how his story sounds in isolation, he did not just pick up a pair of stray running shoes one day and finish a marathon in just over 3 hours.

My money is on all three.

Both Caroline Wostmann and Chris Cherry have an inner running talent that not all of us are blessed with, but, this is not the reason they perform so brilliantly. It is their discipline and commitment to train past their barriers and their mental dominance.

“In my training for this year’s Comrades, one of my motivating factors to train harder was so that I could experience less pain in the last 20km than last year. But when doing a training run with Caroline, her coach Lindsey Parry, said something that stuck with me. He said, “I ran my best Comrades when I stopped trying to out-train Comrades.”

It clicked in Chris that no matter how much you have trained, you will never avoid the pain completely. So (naturally), he did what few of us bother doing and focused on the mental side of Comrades.

“I did a bit of reading about the power of the mind and I came across two very interesting things: first, the central governor theory proposed by Tim Noakes, which explains that your brain will detect when your body is starting to struggle and will try to stop you long before your body actually gets to breaking point – you can thus push through the pain to a certain degree without causing yourself damage. My second discovery relates to the power of the sub-conscious mind.”

Interestingly, when you say things like “don’t quit”, your sub-conscious filters out the word “don’t” and only focusses on “quit”. I thus decided that throughout the race I would focus on thinking positively, for example “keep on, pushing on”, rather than “don’t give up.”

Chris Cherry believes that it’s really important to admit to yourself before the race that there will be pain and make a commitment to yourself to do everything you can to push through it.

Watching his performance alongside Caroline’s it is clear they have both mastered mental control – could this be the winning gene?

Chris has only run Comrades twice and is already running within the winning woman’s time. Should he continue, based on his past and drawing conclusions from his sister’s past, we can expect a ladder climb.

“God-willing, [I do foresee myself doing Comrades for years to come]. The big question is whether I can sustain the training required without neglecting other important things in my life.”

Chris does not want running to become his religion.

“[My wife Jane] helps me to grapple with the important question of how big a part of our lives we want running to be. I love my running, but there are other more important things that I don’t want running to drown out, including my faith, my marriage and my family. We also both want to make a difference in the world so it’s important to not forget the bigger picture.”

So what can we expect from Chris Cherry?

My opinion is that we are witnessing the early stages of a repeat Caroline. Beyond the shared genes, discipline to train hard and mental prowess, this is why:

A few years before Caroline’s sixth place finish, Chris visited his sister for quality time and she ended up dragging him along for a quality session of hill repeats.

“I battled through it and as we jogged back to her house I remember her telling me that one day she wanted to win the Comrades to show people that if they are willing to put in the effort, then they can achieve anything. I’m amazed at how she had such belief even when her running ability was so far from what it is today. She then proceeded to tell me, “You can win the Comrades too if you tried.” I laughed inside at the time, but now I think back on those words.”

I’m no fortune teller, but …watch out world ;)… (I’ve only said that once before.)