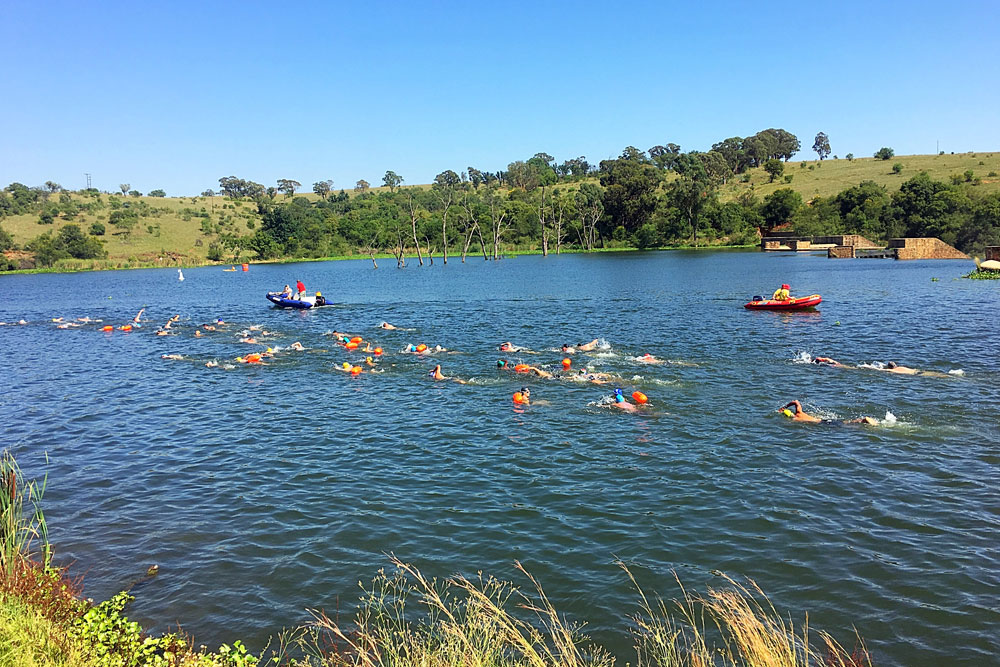 An hour drive, a few hours sun tanning, 1200m swimming, hundreds of kicks and two gulps of lake water later, I did it. I survived my first open water swim and have the prized medal to show for it.

It was recommended by more than one person to do at least one open water swim before the Midmar Mile, so that I had some idea of what I was in for. If I was going to do a swimming race, it may as well be a seeding race to allow me to start the Midmar Mile in the appropriate paced group, so we signed up to do the 1200m swim at the Lake Heritage Water Festival.

The same people warned me that open water swimming is like being in a washing machine, there’s kicking and pulling. I was advised to start at the back to avoid the rush (advice I forgot and duly suffered). To wet my face to get used to the water temperature (it was a hot day, the water was amazing). And to avoid going out too fast and breathing too fast, as it’s not so easy to calm your breathing to normal in the middle of a lake (this I actually followed).

That’s where the advice ended. I was expecting some instructions as to race day, registration, rules, picking up numbers, you know the stuff you find on entry forms and entry confirmations. Crickets. So, I planned this race based on running races.

I premade a PeptoPro and 32Gi mixture the night before so it would be cold and placed it in a cooler bag with water to drink post-race. Pre-race breakfast is usually a coffee, water and piece of toast with some peanut butter and honey. I wasn’t hungry when I woke up so I had water and coffee and took a PB sandwich along to eat an hour before my race which was at 10.30am.

The race took place at Cradle Moon Lodge which as an aside is lovely. It’s close enough to Joburg that you don’t feel like you’re schlepping, but far, pretty and remote enough to feel like a holiday. We figured timing ourselves to arrive about an hour before the first race began would be accurate. It was. It helped that there was no race day traffic. The biggest traffic backup was a 5 car wait to get into the lodge. Unbelievable.

I took a bag I was convinced had everything one would need for a swimming race – warm clothes to change in after, eyedrops, a spare pair of contacts, sunscreens, tissues, snack bars, towel, cap. Honesty I though I was over prepared. That is until we were making our way from the parking lot to the lake and I spotted a family carrying camping chairs and an umbrella. And then as we approached the lake, I saw the setup was essentially a camp site complete with a calm festival feel. If anyone had race day nerves, they were hiding it well.

After a quick registration and number collection, we found a grassy patch and laid out our towels atop what was most likely a giant ant hill. There we settled in amongst the chairs, tents, umbrellas and gazebos filled with people who clearly have done this before. We had an hour to kill before Feige’s group started and 3 and half hours to kill before my group went out. (They split the groups into age categories of 13-31 and under 13, over 31). Which meant lots of time to eat, lie in the sun, people watch and worry.

During that wait we put on sunscreen, water proof sunscreen. A fact I’m adding, as if you saw us post-race you would not believe it. We fried and ended up with our race numbers sun tattooed on our arms. I also, during that time had the most pleasant porta-loo experience. Clean, toilet paper, soap, no lines –  a fact that needs to be mentioned and one I have. Numerous times. We also learned during the wait from the loudspeaker, that an unfortunate someone had their tires removed from the car because of parking illegally in a disabled bay. These water people do not mess around.

Eventually it was time for Feige to head out, which she did and returned unnaturally happy. We had nothing to worry about she assured us. “I got kicked lightly just once”, she said.

A few hours later, after watching more and more people happily return to the shores, it was my turn to line up. I cannot remember when last, I was that nervous at a race start. The batch I was in was not a seeded start, so we floated between two buoys before the horn was blown and it was off to the races. Literally.

Like most races, the start was crowded. However, it’s a touch more difficult to squeeze your way in and get some space when you’re face down and swimming. I had feet in my face, arms whacking both sides and most startling, my legs pulled. Eventually, it evened out and I had space to swim comfortably. The most traumatic moment was when I was slapped by two people on either side simultaneously. Despite this, I thoroughly enjoyed every minute.

The thing that helped me stay on course (despite concerns I’d drift afloat) was something that I watched previous racers do. I swam the race in crawl, but every few minutes I’d switch to breast stroke to allow me to look up and see where I was going without the need to stop.

That’s the thing about open water swimming. The thing I was most nervous about. There’s no stopping until you’re done. You can technically stop, but, stopping in the middle of a lake means you’re still moving around trying to keep yourself afloat which is using energy you can be utilising to get you to the finish. The only way out is through. That’s also why I started to love open water swimming.

I think I’ve become a swimlete. 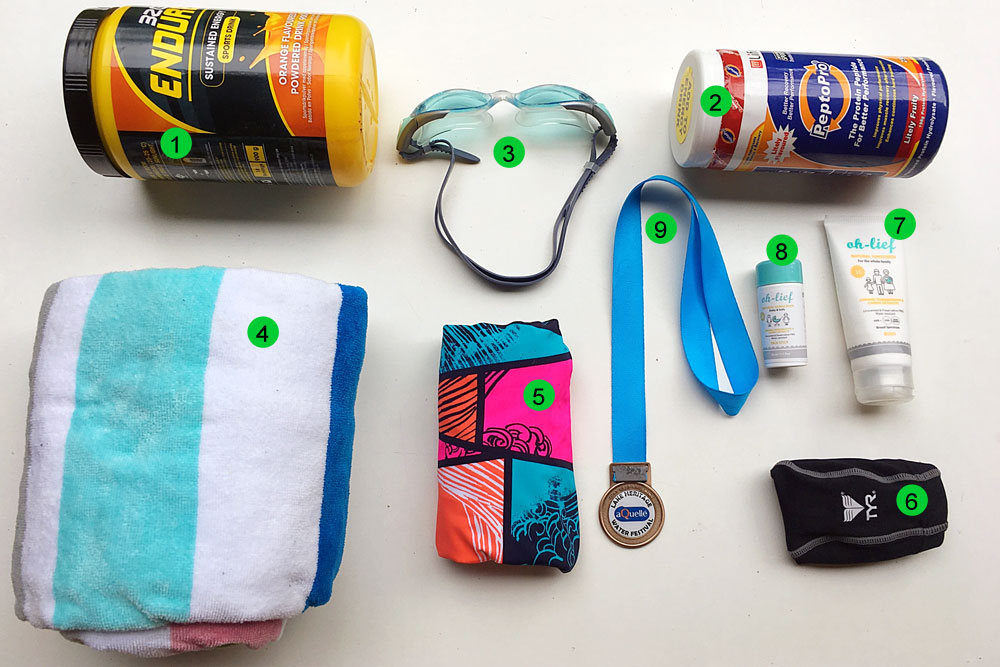 After swimming consistently for almost two months, I had a better idea of what I needed to do an open water swimming race comfortably and what items needed an upgrade.

Swimsuit (5) – Your swimsuit is essentially your race day outfit and you will be spending the better half of a day in it. With that in mind, it was important to me to get something that fit well (I have no room for a race day wardrobe malfunction) and that I felt good in. Swimsuits are tricky, not fun to buy and you NEED to try it on before you buy – I learned that I am not a standard size across all brands.

When it comes to race day outfits, the brighter the better in my opinion. For running it meant choosing colourful shoes and for swimming it meant choosing something bright. Also, I’ve been accused of crab swimming (lies) and Feige voiced concern over me drifting and getting lost. I figure the brighter the swimsuit the easier I would be to spot should I need to be spotted. After trying on numerous sizes and brands, I settled on this uber bright printed Adidas Parley swimsuit which fit great and stayed put the whole day. In a lake filled with black pens I was literally the neon highlighter. Feige also picked out an Adidas swimsuit from their Infinitex+ performance range.

Goggles (3)– I was told that open water swimming requires different goggles to pool swimming. They need to have wider lenses to give you better peripheral vision. Other features you want to look for is anti-fog and UV protection. After trying on almost every goggle in store, I went with the Speedo Biofuse goggles , choosing the female specific ones as I have a small face. They’re fantastic, as comfortable as goggles can get and do not leak. The only issue I’ve had is that while they say anti-fog, they have fogged up on me from time to time.

Cap (6)– I used the same cap I’ve been using during training. It’s works well and is comfortable. For Midmar they make you wear a colour coded cap given to you at number collection, so upgrading would be futile.

Sunscreen (7-8) – I chose a waterproof sunscreen thinking I’d be safe. Either my application was off, or I should have reapplied, but I burnt. Next race will require better sun care.

Towel (4) – It acted as my seat prerace and towel post-race. The bigger the better, I used this one.

PeptoPro +32Gi (1-2) – My go to race day drink has long been PeptoPro so I wasn’t about to change it. I only had a bottle of PeptoPro (not PeptoSport) which needs to be mixed with a sports drink, so I added some 32gi and it went down a treat.

With the heavy training and practice race behind me, I’ve got two more weeks of training to do before tackling the Midmar Mile, which I overheard is like the open water race I did, but bigger. Much bigger.

*This article contains affiliate links which means that if you click on them and make a purchase Nutreats may receive a small commission. Thank you for supporting us.

Food Diary: What a Xterra Triathlete Eats in A Day