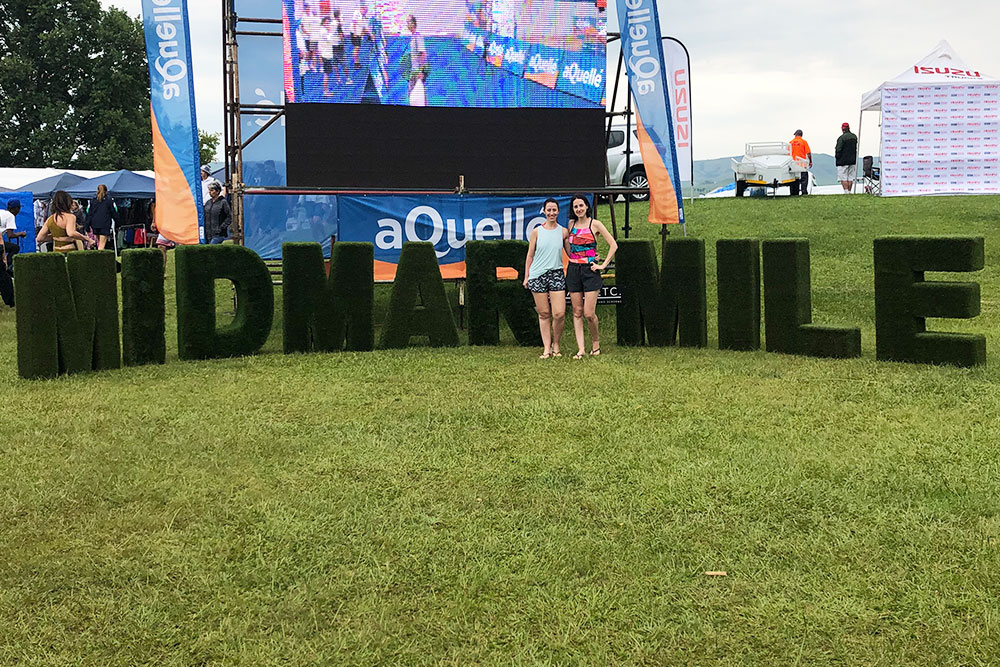 Midmar Mile is just a mile-long swim and is over in well under an hour.  But to get there we did months of swimming training sessions, 2 open water races and drove over 5 hours.

The Midmar Mile is the world’s largest open water race. It takes place in the Midmar Dam, near Howick in KwaZulu Natal and is just 1.6km long. It is a race that we have wanted to do as a family for years, and finally this year three of us took it on. Not in the way we imagined we would have, but we did it. And that mile, short as it may be, felt like a huge accomplishment. It was one of those moments, when you complete something you’ve said for years you would do… one day, and it feels so good.

It’s a five-and-a-half-hour drive to get to Midmar from Johannesburg, so we decided to make a weekend out of it. We turned that over five-hour drive to an over six hour drive thanks to selecting to get race packs before race day. We thought we’d be picking up race packs from a pool near Midmar as per our entry selection, a double check on the Midmar Facebook page informed us it was actually happening in a Mall in Pietermaritzburg. Tip: Keep an eye out on that Facebook page, they keep it updated regularly instead of personally emailing participants.

After a stifling humid selection (the air in PMB is not the air in JHB), we arrived at the farm we were to call home for the weekend. It featured stunning views of the Midmar Dam, baboons, cows, little buks and the largest amount of bugs I’ve ever seen. They don’t make crickets like that in Joburg. 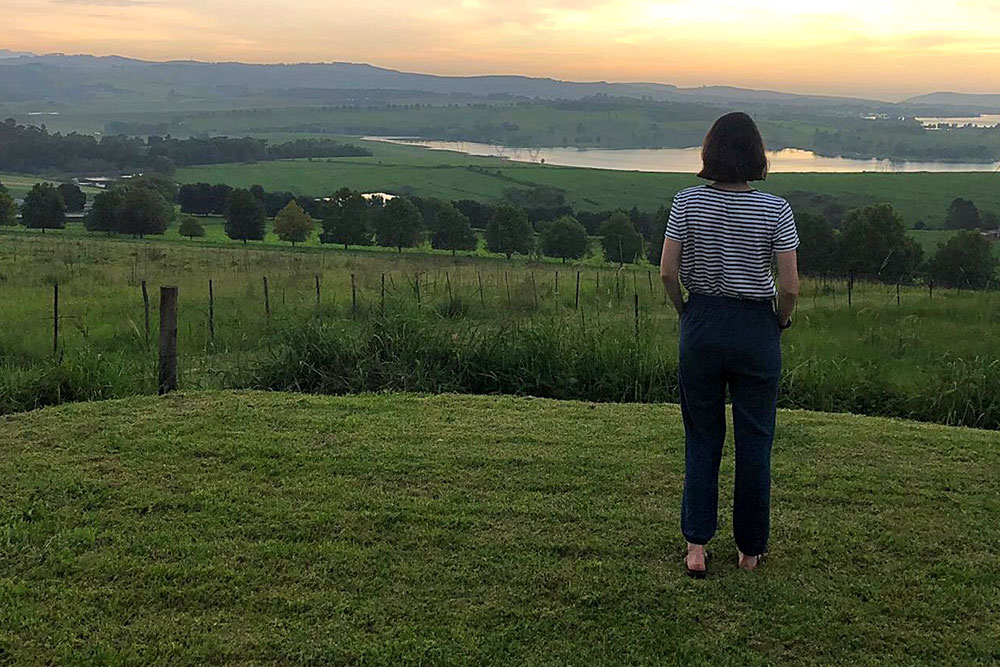 On Sunday morning we woke up with the birds (and cows and one little buck) and ate what has become a standard pre-race breakfast. A slice of toast with peanut butter and honey, a cup of water and coffee. I’m usually not hungry when I wake up, but I tried skipping breakfast before my last training race and it did not go well. Lesson learnt.

After getting dressed and packing a bag of post-race snacks (Nakd and Trek Bars), water and a post-race drink (PeptoPro Sport) we ventured down the windy dirt road of the farm and to the Midmar Dam entrance. Despite it being over an hour until the first race of the day, the Dam was packed with swimmers, tents, chairs, picnic blankets and dozens of stalls selling everything from food, to swimwear to straw bags. It’s like an expo, race and family fun day all in one.

Despite viewing the dam from afar all weekend and signing up to swim in a dam, on first site of the dam up close the nerves were high. It seemed bigger up close and a current creating tiny waves was visible.

We found a spot to ‘set up camp’ near the finish line, started settling down and then after looking across the dam, noticed that the race was point to point. The start line was a mile away and our starting time under an hour away.

Luckily for us, there was a bus shuttle service between the start and finish line that worked well. Instead of walking a mile, we took the bus, for maximum energy conservation.

We got to the start with 20 minutes to spare – the exact amount of time you need to write your race number on your arm, take a very important pre-race picture, have a final porta-potty stop and get into the right starting batch

For a fee of R20 you can put a tog bag with your clothing, shoes and valuables into storage at the start, but I noticed a lot of swimmers hoping onto the bus with nothing but their swimsuits, caps and goggles – no shoes, no shorts, no phones. One of our sisters came with us to the start and we were able to hand her our shorts, tops, flops and phones before entering the swimmer’s zone. At both the start and finishing areas there was space for parking and people camped out. The majority of people were at the finish area, which is where we stayed most of the time watching swimmers coming in. 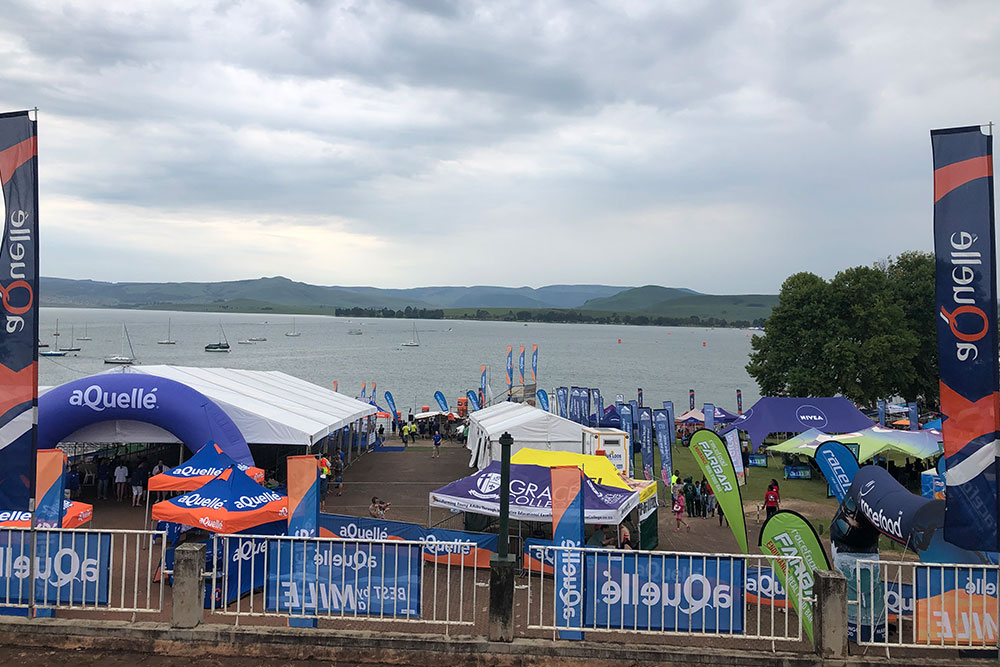 I had been warned about the largeness of the race, a clogged start and getting kicked and pushed. At previous races I had (over)heard that the Midmar Mile was like the qualifying races but on a much bigger scale. I was told to rather start at the back and let the crowds go before swimming, to minimise the shoving and pushing. It was the crowds and the potential of getting knocked around that I was most nervous about. I had been wacked hard on a previous race and could only imagine what would happen with crowds much larger.

I was seeded in the blue group, which was the second group to go out. Despite the warnings I had gotten, the seeding system worked well to manage crowding at the start, and I found it easier than previous races. There was a 2-minute delay between each group, and I didn’t find my group to be overwhelmingly large. It also helped that once the first group had gone out, we moved into the water and waited while still being able to stand up. The start was relatively smooth, I got kicked (and kicked others) a few times, but it was nothing compared to what I was expecting. Feige was in the yellow group, which started after mine and she had a very smooth start with no kicking. My other sister, who was in the younger group had a wilder start that was a bit more aggressive and she got kicked around more.

A reason to do a qualifying race is that it seeds you to start in a group of swimmers who swim around your pace, it also means you get into a seeding batch instead of having to start in the last group which is for those who haven’t seeded.

The actual race was smooth, enjoyable and uneventful aside for a goggle issue. About 100m into the swim, my right goggle started leaking – something it had never done before. I ignored it, but 200m later it was full of water, irritating and I was certain I would lose a contact lens. I figured the 10 seconds it would take me to stop, remove the water and secure them on would be more comfortable than continuing blind, which I did. Incidentally, Feige had the exact same issue. In unrelated news we’re taking recommendations for goggles.

Despite the weather being overcast and drizzly, the water was warm and at the time of my race the current was relatively calm. My younger sister was in the later batch and by the time her race started, the current was stronger. For safety there were plenty of lifeguards stationed throughout the course and a water rescue team kitted out in full scuba gear. There’s also the option of wearing a life saving device which secures around your waste and floats above you like a bubble. I’ve never worn one as I feel it would annoy me, but plenty swimmers do.

There was a buoy every 400m so I was able to keep track of my distance. I spotted the finish line before the 1200m buoy and it felt like it took forever to reach it. In fact, that feeling encapsulated the entire race. The distance felt huge and far before starting and while swimming, but once I got out, it seemed like nothing and I wanted to do it again.

I finished in just over 36 minutes, with Feige coming in in 41 minutes. After getting a medal, a sparkling water and a Racefood bar, I opted for a complimentary 10-minute massage at the Nivea tent. I have never chosen to take part in those massages at races, but this was quite wonderful.

The entire race was incredibly organised and well run. Picking up our numbers took 5 minutes, the shuttle busses worked like clockwork, the seeding system managed the start crowd and the finish line shoot was seamless. The only thing, which is something I’ve noticed about all swimming races is there is no details as to where to go, what to do or any updates like with running races. You need to follow them on Facebook or email if you want to know where to pick up numbers or other questions. 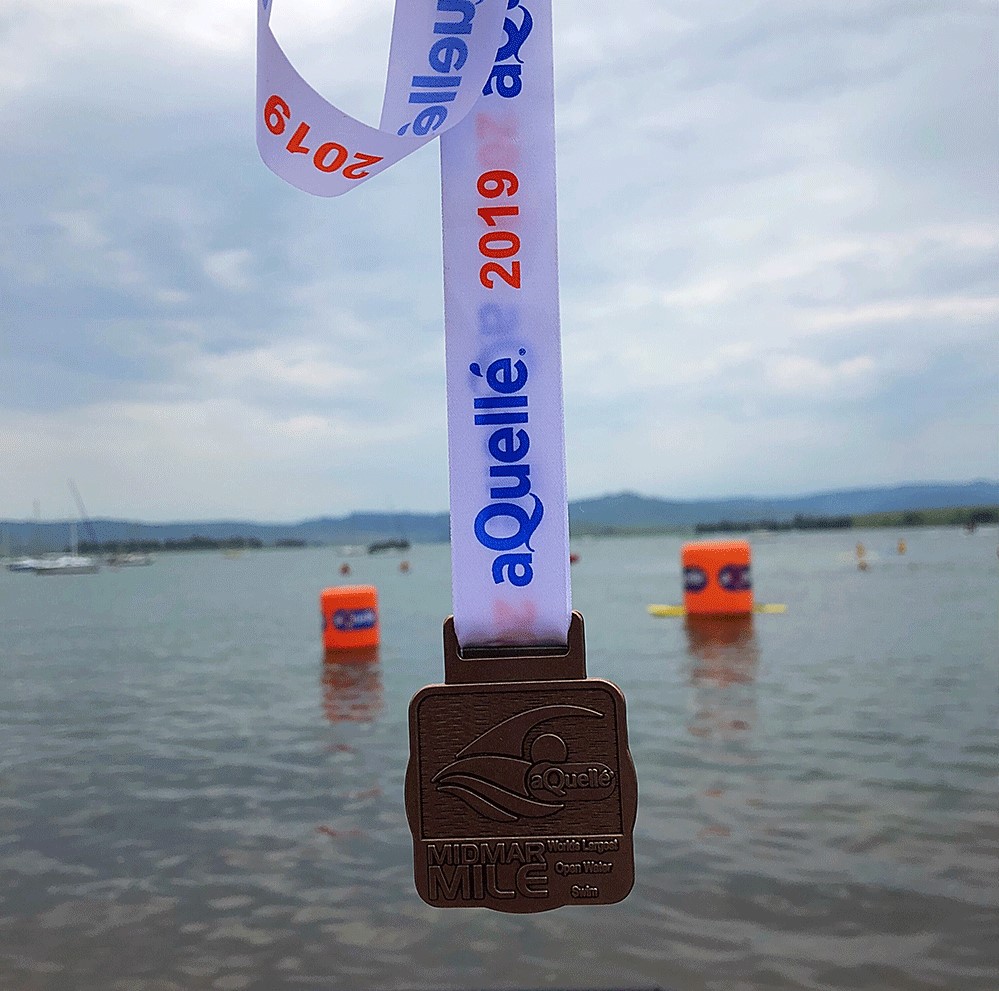 We stayed at the dam until the final event, to watch the winners of each category coming in. Spectating the races is always fun and entertaining (and it has taught me that I never want to come in last just because of the clap into shore that happens that rivals welcoming in the winners and would make me turn around and swim back to the start).

Something that always strikes me at swimming races, is the diversity in participants. There are swimmers of all ages – from young (8-10 years old) to old (over 80). There is everybody shape, fast swimmers and slow swimmers and all are celebrated. From the first person to finish to the very last to swim in, everyone is cheered in.

I’ve been using the same kit since I started the open water swims.

I’m swimming in a swimsuit from Adidas which has worked well for me. The only downside to it is that the lining is white. Dams are not sparkling clear and mud from the bottom sometimes gets kicked up and lands up on you. While the outside comes out perfectly clean once washed, I haven’t been able to get the lining to look perfectly white.

I used the swim seal ear drops before the race as I’ve been doing before all swim sessions and they are ear savers!

These are the goggles that I’ve been using from Speedo, but since the incident I’ll be changing them to something smaller and leakproof.

You are required to wear the cap supplied in your race kit which is colour coded according to your group. It turns out it’s pretty much water proof, Feige came out of her mile-long swim with a dry ponytail, only the hairline of her hair was wet.

Being an under an hour race, in my opinion Midmar doesn’t require that careful sports nutrition plan. I have a small breakfast before which works for me. However, I had an ice-cold bottle of PeptoSport after I finished. I don’t get hungry right after races and knew I’d only be having a proper meal hours after the race, so I like to have PeptoSport as it’s light, not too sweet and gives me decent nutrition before I want to eat food. I also took some Nakd and Trek bars in case I was feeling peckish.

Overall Midmar was an amazing experience which not only would I recommend for others to do, I’d definitely do it again. Only next time I might consider getting a swimming coach so I can improve my technique and time.

How we Swim Proof Our Hair