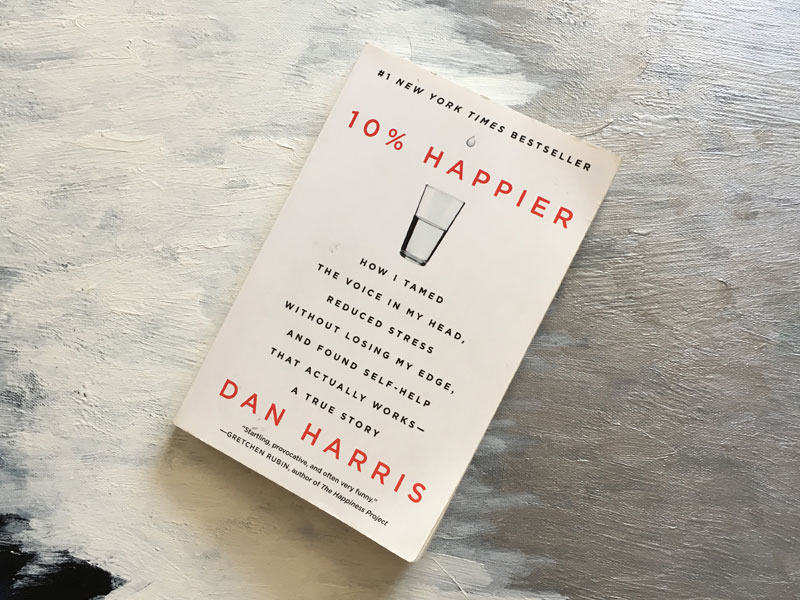 9 Things to know This Week (24 February)

I had no intention of reading this book. Examining a pile of books in front of me, it appeared too self-help like. So, I read 4 other books until I came back to it and reread the front and back jacket. I decided to give it the first chapter.

It didn’t take the first chapter because Dan Harris won me over with his first sentence: “Initially I wanted to call this book The voice in my head is an asshole”. He goes on to describe the internal narrator we all have, the one that keeps going non-stop from the minute you open your eyes to when you fall asleep. This internal voice, narrates what you see, do, feel, should do, can’t do and is so fixated on the past and future that the now suffers.

10% Happier is part autobiography and part self-help. Dan Harris, who co-anchors Nightline and the weekend edition of Good Morning America has been a TV journalist for over 15 years. In 10% happier he details his career trajectory, stint as a drug addict, public panic attack and journey into the world of meditation.

Dan Harris manages to take the topic of meditation and make it more than an airy fairy notion that promises instant happiness and inner peace.  He delves into the world of meditation with the mind of a journalist – researching and questioning every aspect. The nerd in me loved this, and it’s certainly something that sceptics can appreciate.

He didn’t just read the books. He interviewed Ekhart Tolle, author of The Power of Now, Deepak Chopra – guru to the stars as well as the Dalai Lama. He details his interviews with them and recalls finding it hard to believe that Tolle is always present and never gets angry. He remembers watching Deepak Chopra get agitated, loud and restless during debates and The Dalai Lama’s admittance that self-centeredness isn’t always a bad thing.

Mindfulness has become a buzzword – be mindful in your interactions, practice mindful eating… But what does that actually mean?

Can you really control the thoughts that pop into your head? And, if bad things happen to you is it because you had a negative mind set? Contrary to the motivational quotes insisting that you can control your thoughts and that thinking positive results in positive outcomes, Harris uncovers the fact that the Buddhist view is that you cannot control what comes up in your head. So much time is spent judging ourselves harshly for feelings that we had no control in summoning.

Mindfulness is less about controlling thoughts and more about creating a space in your mind to allow you to respond instead of to react. It becomes about controlling how you respond to life’s obstacles, not avoiding them. It’s not about having no flaws, but accepting the ones you have.

For someone like me who’s basically been diagnosed as a worrier (a Doctor once told me I worry too much), the chapter in which he discusses with a mentor that worrying, plotting and planning is ok until it’s not useful anymore, provided me with real life tips on how to deal with what Buddhists term “Prapanca [Pra-PUN-cha]. Prapanca is the tendency of the mind to start worrying and predicting the worst of the future when something happens.  Mindfulness is not avoiding it, but rather being aware of the point that it becomes no longer useful.

By the end of the book, the concept of meditating seemed less like a waste of time and more like something I’d want to do. In a world where we’re constantly switched on, and monkey minds run rampant, the thought of taking time each day to do nothing but sit and focus on your breathing seems attractive. Especially if as he documents, it helps you better manage the daily bumps and stresses life throws at you.

Below are some of my Favorite excerpts from 10% Happier

“[The ego is] obsessed with future and the past, at the expense of the present. We live almost exclusively through memory and anticipation.”

“Make the present moment your friend rather than your enemy. Because many people live habitually as if the present moment were an obstacle that they need to overcome in order to get to the next moment. And imagine living your life like that, where always this moment is never quite right, not good enough because you need to get to the next one. That is continuous stress.”

“Learn to lean into what is bothering you instead of “fleeing it” [the only way out is through].”

“When faced with life stresses, often it’s not the unknown that scares us, it’s what we think we know that’s going to happen – and that it’s going to be bad. Truth is, we really don’t know.”

“Striving is fine as long as it’s tempered by the realisation that, in an entropic universe, the final outcome is out of your control. If you don’t waste time on variables you can’t influence, you can focus much more effectively on those you can. When you are wisely ambitious you do everything you can to succeed, but you are not attached to the outcome – so that if you fail you will be maximally resilient, able to get up, dust yourself off and get back into the fray.”

“Your mind is a waterfall with the stream of water representing your thoughts. Mindfulness lies behind that stream. The point of getting behind the waterfall isn’t to magically solve your problems, only to handle them better. By creating space between stimulus and response.”

What you Should Know Before Your First Yoga Class

9 Things to know This Week (24 February)