Fitness, Getting Started, Nutrition
Sponsored by 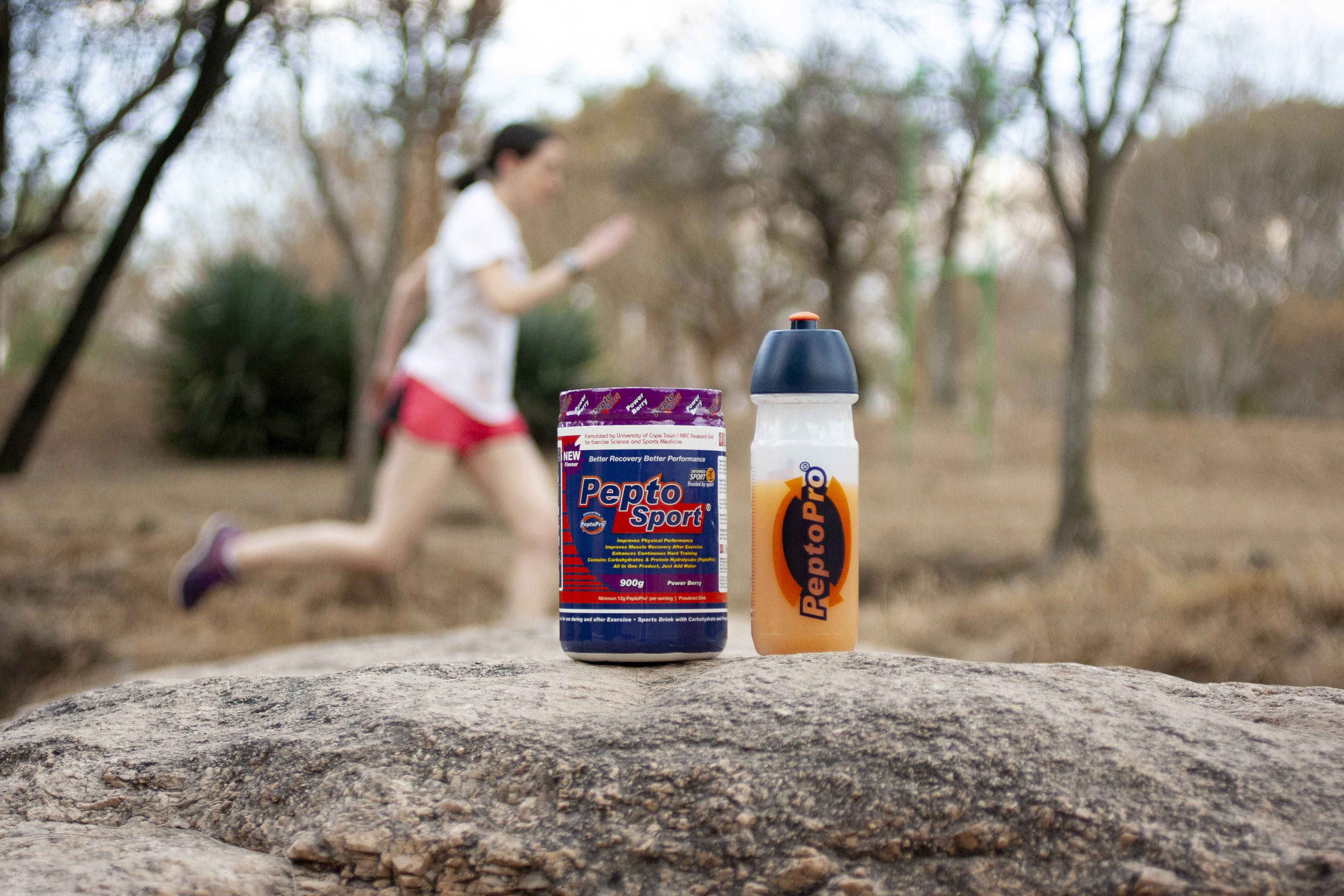 When it comes to protein in the context of exercise or sport, it has the reputation of being essential for recovery, post workout. Typically, protein shakes, bars and powders are marketed to be consumed post workout. The conventional wisdom in sports nutrition, is that you need to consume a combination of protein and carbohydrates within the first hour after exercise. The role of carbohydrates is to restore your glycogen levels, which are left depleted after exercise.  The role of protein is to repair your muscles and minimize fatigue. Together, they help your body recover faster and allow you to continue training day after day.

Some sports nutritionists will tell you that if you want to be back at training the next day, it’s better to have it 15-30 minutes after. Others aren’t as sticky with the golden hour and say that you have more leeway – up to 4 hours post exercise. Regardless of the timing, they will all tell you about the magical 3:1 ratio of carbohydrates to protein. This roughly translates into 30-60g of complex carbs and 10-20g of protein.

However, for any endurance sport or exercise which exceeds 90 minutes, it’s not enough to fuel afterwards. You need to fuel during as well. If you’ve seen enough pre-race photos with kit, race bib and nutrition all laid out, you’ll know that easy to digest carbohydrates in the form of gels, chews and energy drinks are a firm favourite. And if you’ve done an endurance race, your race fuel most likely consisted of only carbohydrates and no protein. But if you want to optimise your performance and post-race recovery, is a purely carbohydrate dense race fuel enough? 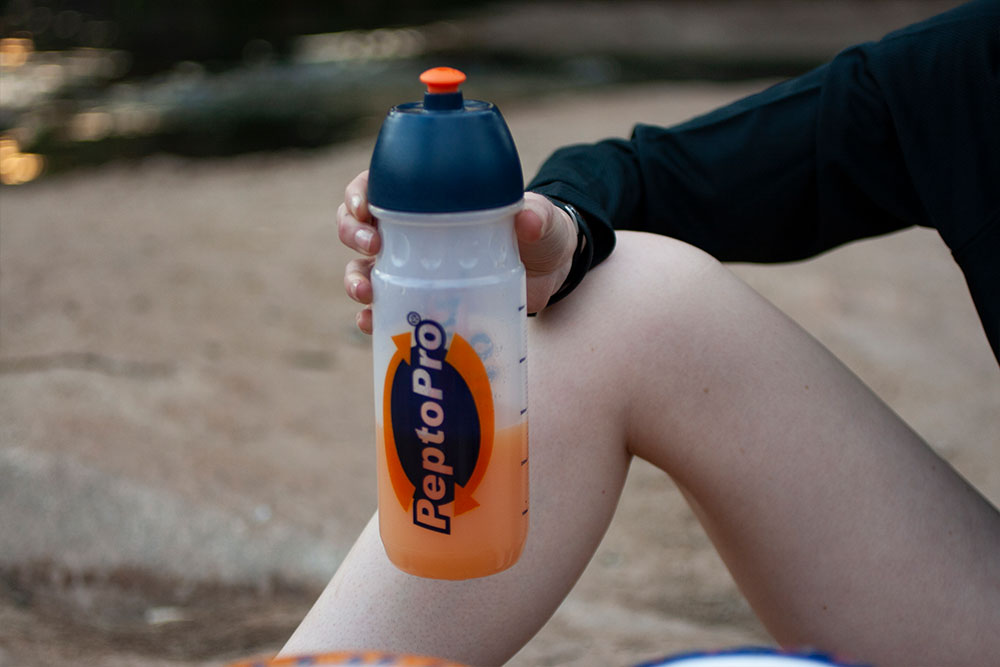 The first time I ever heard about using protein during endurance sport was when we interviewed Caroline Wostmann after her Comrades win. She told us that one of the most important things she changed was her nutrition. Her first Comrades was fuelled by water, the result of which had her hitting the wall. The next Comrades she added gels and energy drinks. During the Comrades she won, she consumed 2 protein shakes along with her carbohydrate heavy energy drinks and gels.

Months later at a sports nutrition talk I attended, the topic of consuming protein during endurance sport was brought up again. The speaker explained that after 70-80 minutes our bodies starts to burn the protein which is stored in our lean muscles. We need these muscles to propel us forward and the last thing we want is to cannibalise them. When your body starts doing this, you experience a dead leg feel. To avoid that, you need to be taking in protein during the event. Protein it turns out is not just a recovery tool, it’s a powerful performance tool when it comes to endurance. 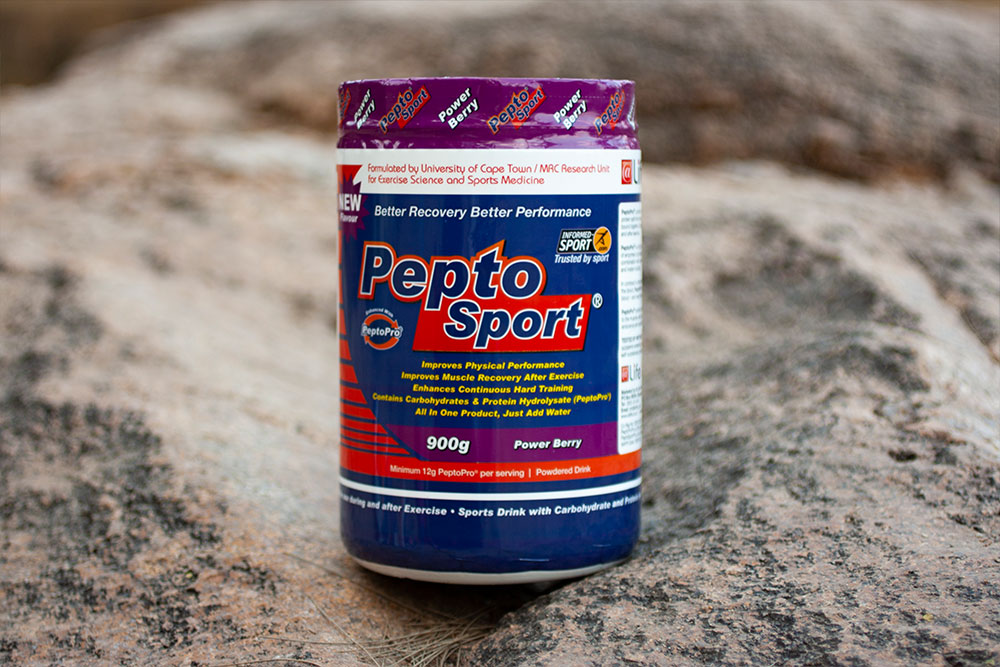 Soon after that talk, I started to experiment with taking in protein during long training runs, not just after. After trial and error, I settled on PeptoSport ®, a sports drink that combines both carbohydrates and protein in the form of protein hydrolysate (peptides) from casein. It essentially does the work of 3 products – hydrates, refuels and helps you recover. PeptoSport ® has not only had an impact on my performance and preventing crashes, it has also significantly impacted how I recover.

It’s not just me (or Caroline) who advocate the benefit of using protein together with carbohydrates during endurance. The science does too. 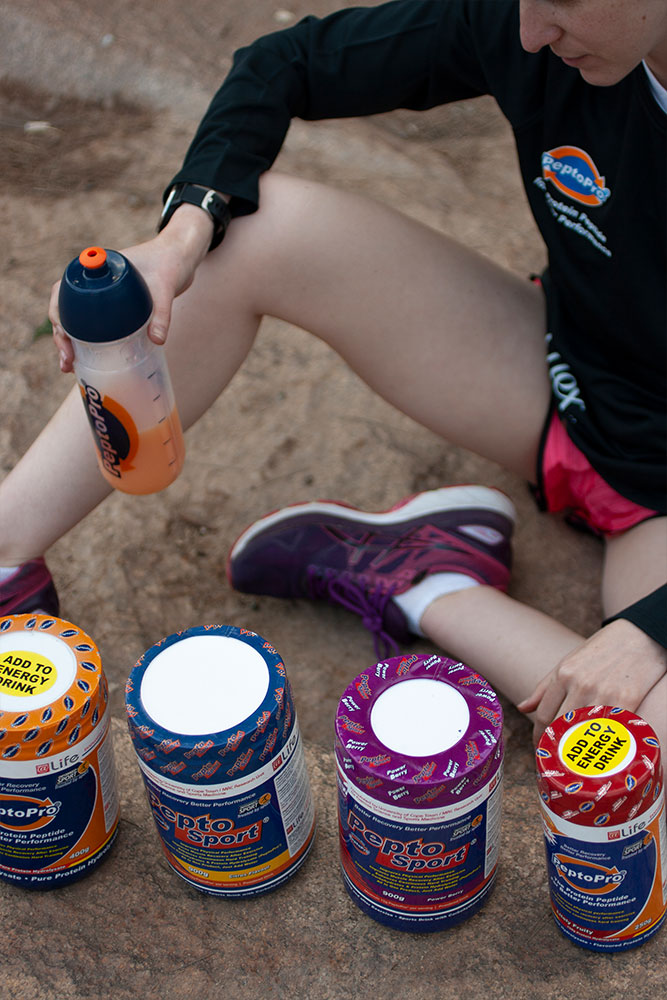 Why You should Add protein to Carbohydrates During Endurance Activity

To solve this, you want to ingest a protein hydrolysate. A protein hydrolysate is essentially a partially digested protein, the protein has been broken up into shorter length peptides. These are quickly and easily absorbed, making them suitable for exercise.

Secondly, athletes were less likely to have a dip in heart function after endurance exercise when ingesting a mix of casein hydrolysate and carbohydrates. This means that they can recover quicker. 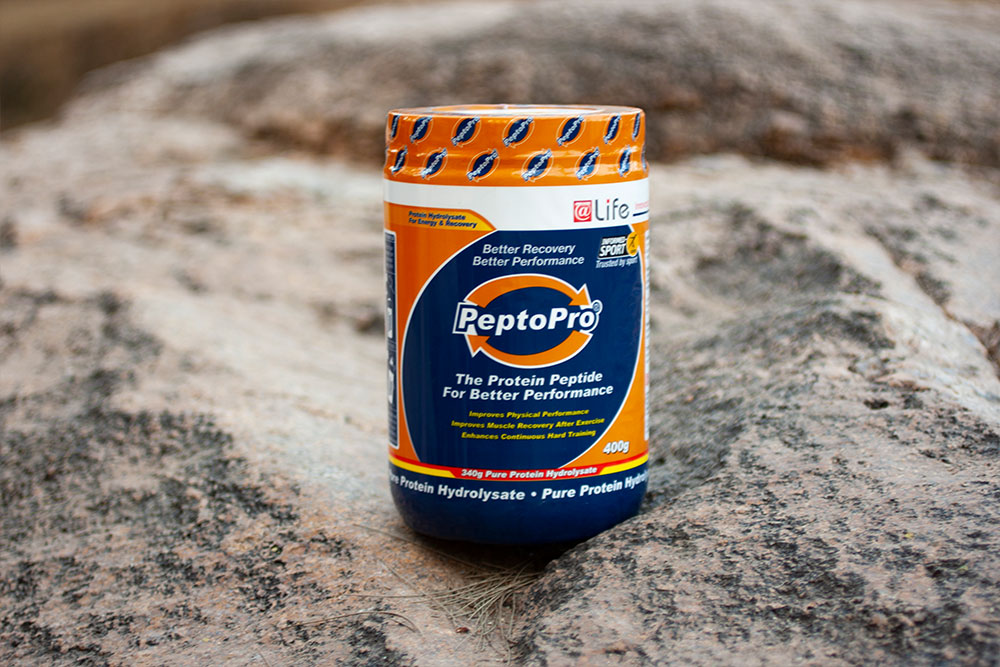 Further studies have shown that ingesting protein hydrolysate and carbohydrates during or immediately after exercise may have a three-fold effect:

When you train or race over a long period of time your muscle glycogen stores become low. This makes training harder and performance suffers. The goal of sports nutrition is to replenish those stores as quickly as possible. Adding protein hydrolysate to carbohydrates increases the rate of replenishment. The protein hydrolysate is absorbed quickly which leads to high insulin concentrations in the blood. This causes an increased rate of glucose uptake in the muscles and a faster formulation of muscle glycogen.

To be effective at repairing existing muscle protein you need leucine along with amino acids. Hydrolysates contain a high quantity of leucine along with other amino acids needed to make new proteins (muscle). Research has shown that even by ingesting a small amount of hydrolysates, you switch on the pathway leading to muscle formation. This means improved recovery.

Cortisol is an important hormone. During exercise it can improve concentration. However, prolonged high levels aren’t good and can cause muscle tissue breakdown.  Ingesting carbohydrates during or after exercise has been shown to bring down cortisol levels faster.

Despite there not being enough research to make definitive claims, Andrew Bosch, a PHD and expert in sports nutrition and Professor at UCT’S Research Unit for Exercise Science and Sports Medicine, says he has seen enough anecdotal evidence amongst athletes to suggest that it is beneficial to performance and training to consume a protein hydrolysate and carbohydrate during or immediately after training. The mixture he recommends consists of 0.2g/kg body weight of protein hydrolysate and 0.8g/kg of carbohydrate, ingested within the first 30 minutes after training. 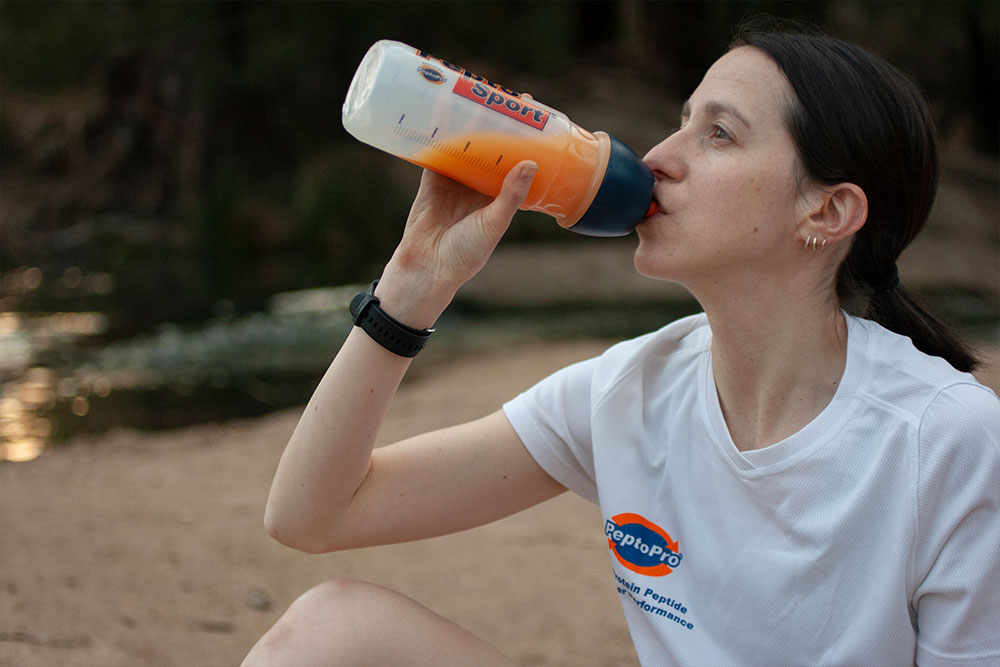 As an avid but far from pro athlete, I’m always looking for things that work for me. Things that are easy to add into my routine and that give me noticeable benefits. I may not be going for a podium position, but I still want to feel good during events and recover fast after. PeptoSport ® has become a large part of helping me do that.

As someone who struggles to take in fuel during endurance, I’ve found it to be easy to drink. It doesn’t make me feel overly full and has never given me digestive issues. The fact that I can use one bottle of premixed PeptoSport® to get in what I need during endurance events. Much easier than combining gels with water.

The peptides contained within PeptoSport ® give it a naturally bitter taste. I have found the bitterness to be an undertone that is a refreshing change from overly sweet sports drinks. I find that the longer I’m exercising, be it training or racing, the more sensitive my palate becomes to sweet tastes. That slight bitterness tastes incredibly good to me.

Another huge factor that made me such a PeptoPro® and PeptoSport® fan, is that all their products have the Informed Sport Trusted by Sport Seal. This means that they’ve been tested against contamination and banned substances. A big issue with sports supplements is that there’s no standard regulation. A seal like this means you don’t have to worry about problematic substances being added in.

What also stands out about the PeptoPro ® and PeptoSport® range is that the serving suggestions are by weight. Most sports and recovery drinks give two options for serving suggestions, none of which are based on weight. I like that PeptoSport® uses weight as a guide for consumption. At different weights, your needs are going to be different and they make it easy to figure out how much you need for your body weight. 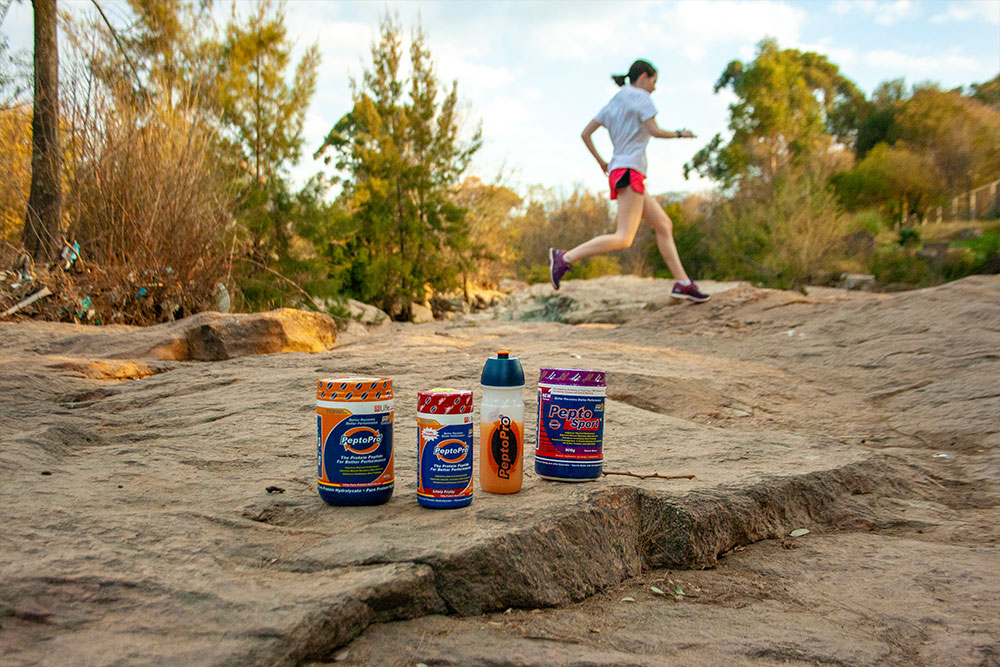 I view PeptoSport® very much as a sports nutrition supplement. I use it specifically for endurance rather than a protein shake which is commonly taken to help consume more protein.

I prefer my PeptoSport® ice cold – it tastes better that way and I recommend this is how you consume it too. PeptoSport® comes in two flavours – Citrus and Powerberry. My preferred flavour is the PowerBerry. I opt for using PeptoSport® over PeptoPro®, as PeptoPro® needs to be mixed with a flavoured carbohydrate-containing, energy drink (or diluted fruit juice).

During runs that exceed 2 hours, I’ll use PeptoSport ®. If it’s a training run, I’ll carry ice cold bottles with me and sip them at regular intervals. For races where it’s possible to have someone hand you a drink (like at Comrades), I’ll include them into my food packs. These are prepacked and given to me at pre-determined points. If you want your drink to be cold by the time you get it, my tip is to freeze it overnight. It melts throughout the day and by the time you get it, it should be perfectly melted and cold. Alternatively, if your race isn’t quite as long as Comrades, or you’re worried it won’t melt in time, freeze half of the mixture overnight and top it with the other half in the morning.

I use PeptoSport ® as a recovery drink either when I won’t be having a meal for a while, or when my training load is heavier. During these times I put more focus on my sports nutrition. I always take a cold bottle of PeptoSport ® with me to races (be it swimming or running). I have it as soon as I can after finishing. It takes me a few hours after a race to have an appetite and I rarely finish a race wanting to eat. However, I know from experience that consuming something that provides nutrients as soon as possible afterwards makes a huge difference in how I feel the next day.  PeptoSport® is light and fruity, making it easy to drink and refreshing. It allows me to give my body good nutrients until I’m ready to have a proper meal.

I have been using PeptoSport ® as my choice of sports nutrition for the past four years. It became my go-to after my third Comrades. After consuming it during and post-race, my recovery was vastly faster than I had ever experienced before and since then I continue to feel the benefits. If you are looking to improve your performance and recovery, I highly recommend giving PeptoPro® or PeptoSport® a try.

You can buy PeptoSport ® and  PeptoPro ® online here or from Dischem. Find out more here

Bath Salts for Every Mood